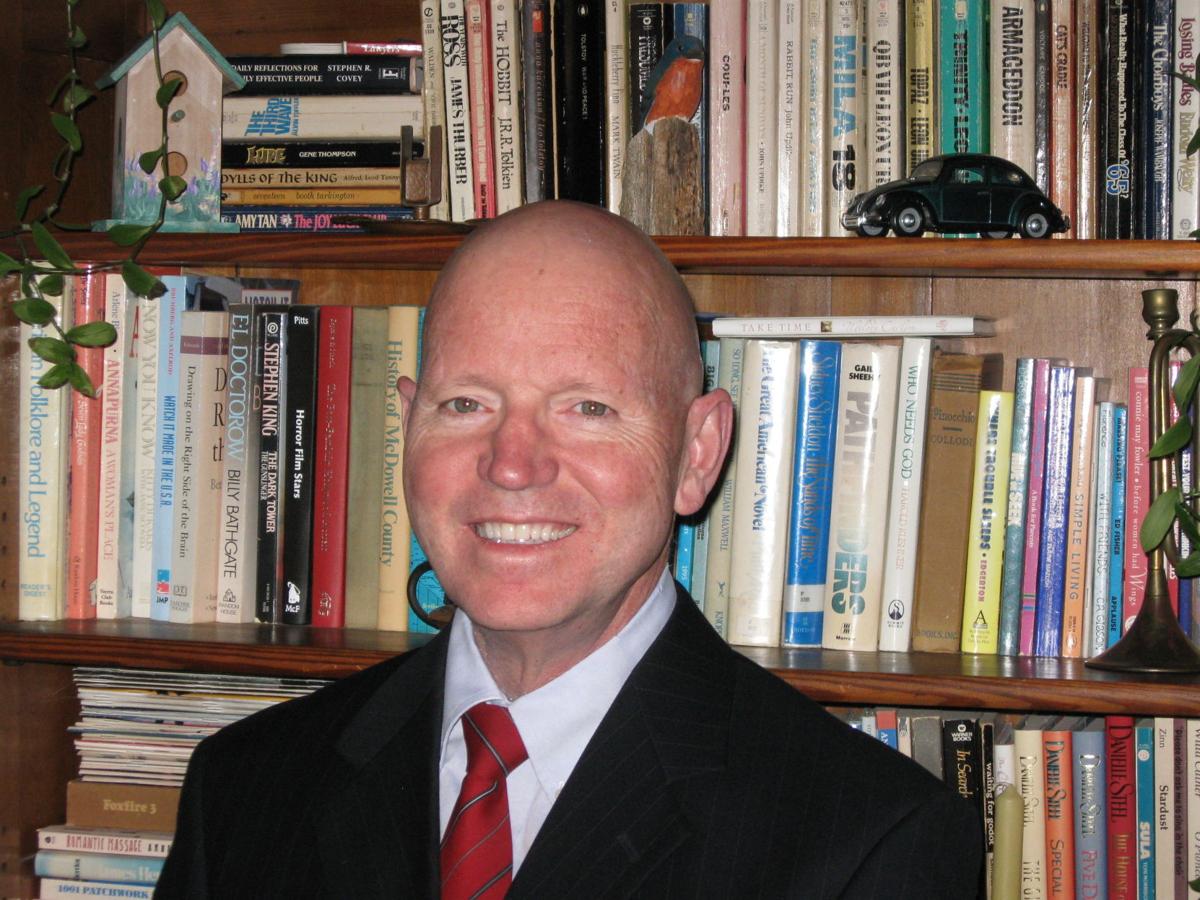 Grady Lonon was always present and working for good in the lives of others. He did so through his law practice working with and for his clients, directing the choir at Bethany United Methodist Church, sharing his faith through his musical expertise and shining on stage with Ashe County Little Theatre productions. 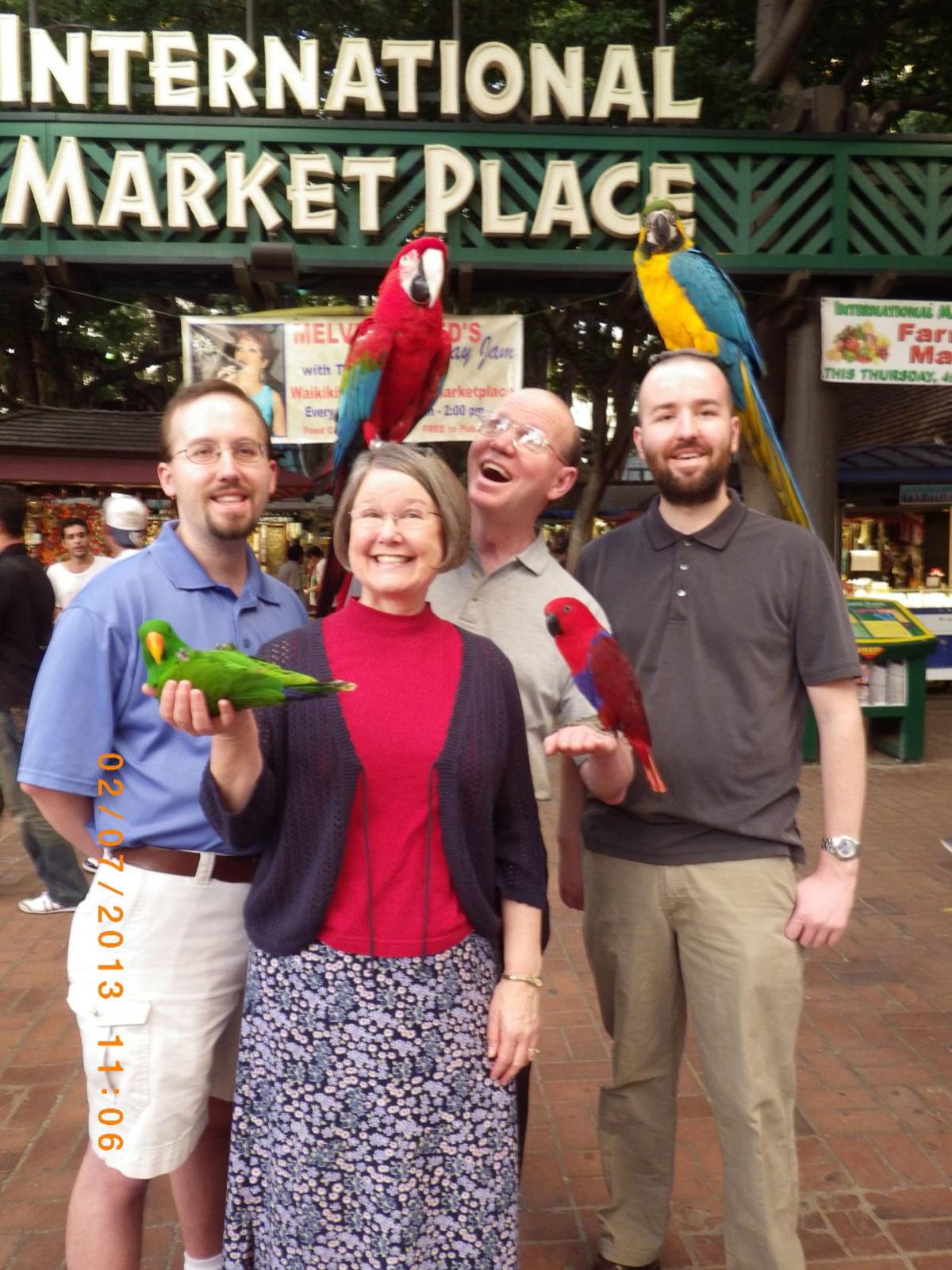 The Lonon family poses for a photo with parrots while on vacation in Hawaii in 2013. From Left: Matthew, Jane, Grady and James Lonon.

Grady Lonon was always present and working for good in the lives of others. He did so through his law practice working with and for his clients, directing the choir at Bethany United Methodist Church, sharing his faith through his musical expertise and shining on stage with Ashe County Little Theatre productions.

The Lonon family poses for a photo with parrots while on vacation in Hawaii in 2013. From Left: Matthew, Jane, Grady and James Lonon.

Oscar Graydon “Grady” Lonon passed away on March 29 at Kindred Hospital in Greensboro. His legacy will continue to live on in Ashe County as he is remembered for his talents as a singer, actor, director and attorney who made a difference in the lives of the community.

Lonon is survived by his wife, Jane Chapman Lonon, and their two sons, James and Matthew Lonon. He is also survived by his sister, Julia (Jim) Mathews, as well as many nieces, nephews and cousins.

Lonon was born in Marion, to the late Oscar Graydon Lonon Jr. and Irma Louise Johnson Lonon. He was raised in Charlotte by a family that nurtured and supported his musical leanings. As a student, he was an active member of Myer’s Park High School’s music program and honed his early theatre skills by participating in their musical productions. While in Charlotte he was also part of a Jug Band with high school friends. According to Jane, his instrument of choice was the wash tub bass which he loved playing.

Lonon majored in music education at UNC-CH and he loved all things Tarheel. He spent two summers working at the Farm House Restaurant in Blowing Rock where he met his wife of 49 years. They sang and entertained together while waiting on tables for the clientele.

After college, Grady was accepted into the Air Force Band’s Singing Sergeants. He was stationed at Bolling Air Force Base in Washington, D.C., but traveled extensively with the band as a part of the military’s outreach to communities all across the United States.

After his service in the military, the Lonons moved to Los Angeles where Grady worked in the entertainment industry as a publicist and business manager for TV personalities. This career is what led him to law school in order to better serve his clients.

The Lonons moved back to the mountains of North Carolina in 1981 after the birth of their first child. They fell in love with Ashe County and became involved with the community.

“Grady was a sole law practice practitioner working primarily in real estate and estate planning. As an attorney, Grady helped many people, but he also shared his time and skills helping those in need,” Jane said.

Music played an important role in Lonon’s life. He served as director of the Ashe County Choral Society for many years and served as Chancel Choir Director at Bethany United Methodist Church for 35 years. He also was a member of the Bethany Ding-A-Lings Handbell Choir, which is directed by Jane.

The Rev. Dan Money, pastor of Bethany United Methodist Church, said that although Grady was not ordained, he had a minister’s heart and loved to help people experience God through worship.

Money said Lonon brought out the best in all of his choir members, musicians and congregants.

He said upon finding out that he was being appointed to Bethany, people started to tell him what a wonderful church it was and about the wonderful worship services held there.

According to Money, he quickly realized that Grady and Jane were the inspiration behind the church’s great reputation. He said Grady helped people experience God’s grace through music and Bethany members loved him for his expertise and talent.

Money said that although he cannot sing well at all, watching Lonon’s warm and inviting smile as he directed the choir made him believe that he could.

“It goes without saying that there is a big hole left in Bethany church and we are all very saddened by this great man’s passing. He has made us better by his presence with us and we will forever be indebted to Grady for the many ways he has ministered to us,” Money said.

Rebecca Williams, who serves as the program director at Ashe County Arts Council, said she was fortunate to work with Grady through the Ashe County Little Theatre.

Williams said as the costumer for his musicals, she was always challenged to be creative and think outside the box, while still honoring the musical theatre tradition because that was “Grady’s way.”

“Grady’s love of music was evident in the shows he directed. For several years he and Jane directed and produced some of the biggest ACLT summer musicals, ‘South Pacific’, ‘Sound of Music’, ‘Music Man’ and the perennial favorite ‘Annie,’” Williams said. “Grady always had a director’s eye with a vision for every show.”

Williams herself directed Grady in “Into the Woods,” which was her directorial debut for ACLT in 2007. “He was so much fun to direct and gave a wonderful nuanced performance as the Baker. His influence will be felt in the Ashe County Little Theatre for many years to come and he will be missed,” Williams said.

Michael Bell, a local musician who was a good friend of Lonon’s, shared some fond memories from when they worked together in the Ashe County Choral Society and in Little Theatre musicals.

The two shared a wonderful partnership that lasted decades during the time that Lonon directed the Ashe County Choral Society and Bell accompanied it.

“At rehearsal, I would pound out the vocal lines to get the singers’ notes correct. Then Grady brought in the sensitivity and interpretation that made mere notes come alive into music, often with a twinkle in his eye,” Bell said.

Bell said Lonon directed many Little Theatre musicals where he was in the pit conducting the orchestra. Bell described working with him as a pleasure and said Lonon’s combination of skills always helped mold the musicals into fine shows.

According to Bell, Lonon could visualize the future and act to advance it, whether it was an estate plan for a client, a vision for establishing an art school, or possibilities available to further business and the arts in Ashe County.

“Grady’s strength, humor, integrity and his talents as an attorney, singer, conductor, actor, director and friend will be sorely missed,” Bell said.