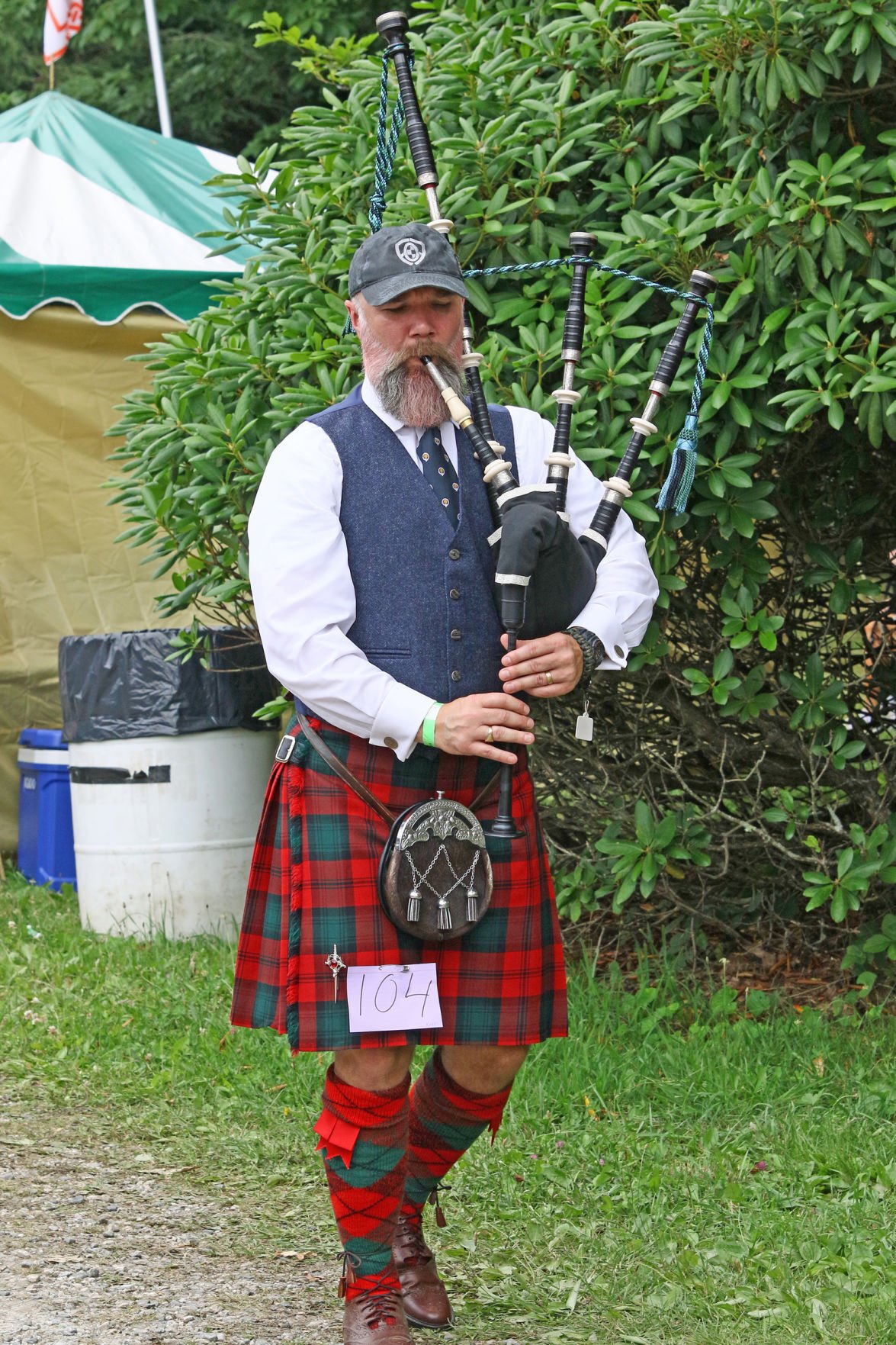 Andrew Kerr participates in the piping competition during the 65th Annual Grandfather Mountain Highland Games. The bagpipes were blaring throughout the camping areas and meadows during the much-anticipated festival, as clans reunited and renewed acquaintances and tens of thousands descended upon MacRae Meadows for the four-day event. 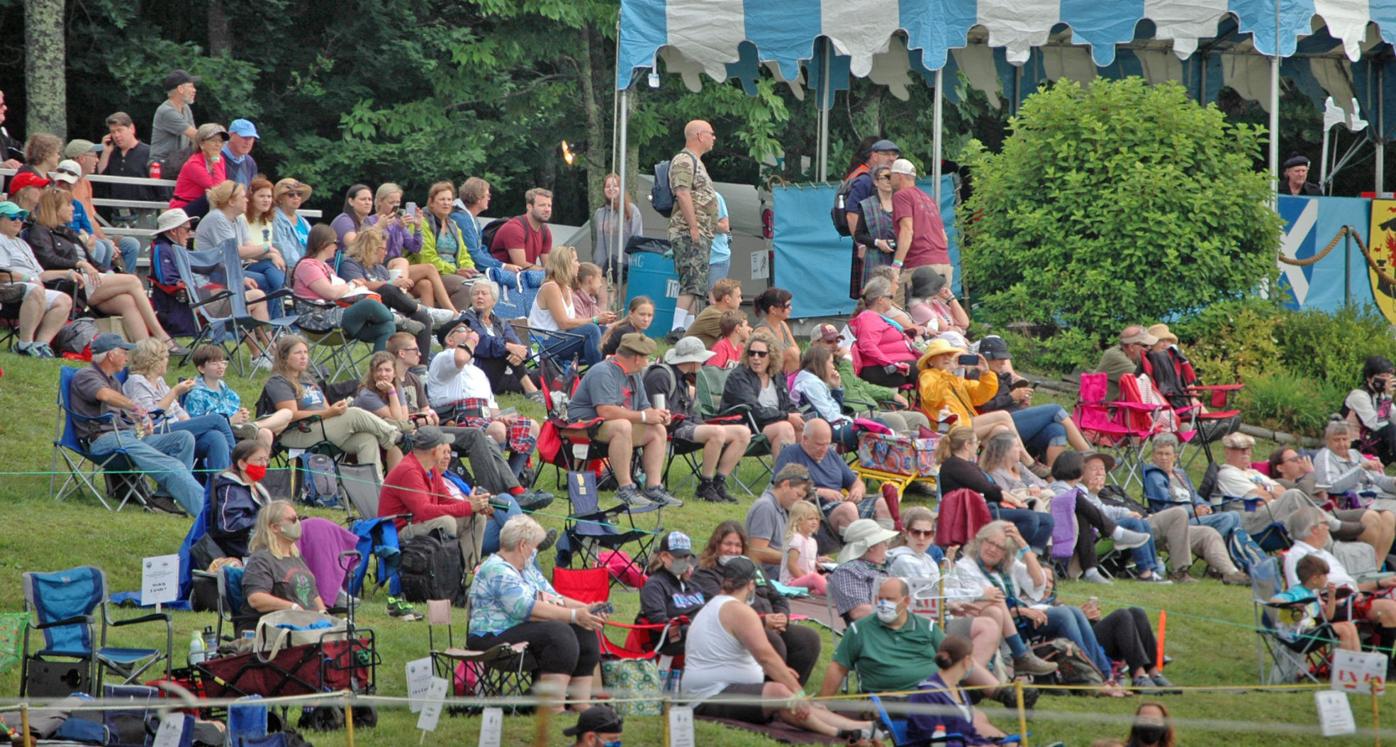 As early as Friday morning, large crowds of spectators gathered around the track at MacRae Meadows to watch dancing, heavy athletics, and numerous demonstrations as part of the 65th annual Grandfather Mountain Highland Games.

Andrew Kerr participates in the piping competition during the 65th Annual Grandfather Mountain Highland Games. The bagpipes were blaring throughout the camping areas and meadows during the much-anticipated festival, as clans reunited and renewed acquaintances and tens of thousands descended upon MacRae Meadows for the four-day event.

As early as Friday morning, large crowds of spectators gathered around the track at MacRae Meadows to watch dancing, heavy athletics, and numerous demonstrations as part of the 65th annual Grandfather Mountain Highland Games.

GRANDFATHER MOUNTAIN — Following a year that featured the first-ever canceled Games weekend and left much uncertainty over whether a Grandfather Mountain Highland Games could be held in 2021, clans returned and marched with tartans aloft, athletes ran and threw and gave their all for championship glory, pipers played, lassies danced and thousands upon thousands who share a kindred spirit with the Games returned home to MacRae Meadows for the ultimate family reunion from July 8 to 11 at the 65th annual Grandfather Mountain Highland Games and Gathering of the Clans.

According to GMHG Office General Manager Thomas Taylor, Jr., preliminary estimates indicated that this year’s event brought approximately from 30,000 to 40,000 people from points near and across the globe to MacRae Meadows during the course of the weekend, all for the purpose of celebrating and honoring Scottish culture and heritage.

“This festival was very successful. I’d say that approximately 99.9 percent of the people who attended the festival was very happy with how things went. I heard a lot of positive comments. With the lack of 2020’s Games, it made it doubly exciting for everybody,” Taylor said. “I hugged more people this year than I’ve ever hugged, if that is any indication. I believe that everybody was just happier to see each other. and it reverberated throughout the Games.”

Despite the two years between Games weekends, Taylor noted that all the moving cogs of the wheel that is the festival operated seamlessly, from the athletics to transportation to the vendors selling their food and wares.

“We had the typical instances you’d find at a festival event, but we didn’t have any real trouble through the weekend. We’re very fortunate to have visitors with an attitude of being really glad to be together. It was like when I’d look at a person, they were always smiling back,” Taylor explained.

There was truly something for every taste at the Games. From feats of strength and heavy athletics to music, food and cultural seminars, visitors to the event had the opportunity to experience traditional and contemporary Scottish culture at one of the largest gatherings of Scottish Clans in the Western Hemisphere.

The Games began in earnest on Thursday evening, with a torchlight ceremony and a “raising of the clans,” echoing a traditional Caledonian summons to battle. With a living cross of light formed on MacRae Meadows, the Games were declared open and the pipes wailed into the night.

Friday was abuzz with activity on the mountain, as the morning began with dance competitions, amateur athletics and musical performances in the Groves. Musical workshops followed Gaelic singings and children’s wrestling, and all the while the pipes continued pipin’.

Thousands upon thousands crowded into the Meadows on Saturday in what was by far the Games’ biggest day. As runners trailed in throughout the morning from the Grandfather Marathon, entertainers once more filled the groves and athletics and sheep dog demonstrations filled the field. Music competitions and workshops offered amateur pipers and fiddlers a chance to compete and professional heavy athletes vied for glory.

Sunday of the Games was a bright and cheery morning, with a worship service and Kirkin’ of the Tartans. Following a sermon from Rev. Douglas Kelly on “The Hero of the Scots,” the clans joined as one in a benediction, blessing each other in light.

Each year the four days of the Games, from the running of The Bear on Thursday to the Sunday closing ceremony and MacRae Meadows being graced with the “Ghost of Alec MacRae,” are an odyssey shared by those who are connected by a love for one another and one’s Scottish ancestry. Time spent with one another at this year’s festival, however, proved to be of a familial nature, as loved ones joined together as if for a family reunion to catch up and recall days of yore, parting with the phrase, ‘May the blessings of light be upon you, May the blessing of Rain be on you, and may the blessing of Earth be on you — May the Lord Bless you and Bless you kindly.’

“Though things went well, there are always those things you wish had done more successfully or better. I missed a few things that I’ll do differently next year, because I was in the middle of some things really for the first time, things that now you won’t forget,” Taylor said. “I feel in many ways that this was a learning year, and we’re all ready for 2022. We had a really good 2021, though, and I’m appreciative and thankful for every one of the many people who made the Games possible this year. Those are the people who are integral to making the Games happen and are the heart of the festival. I’m grateful that we were able to come together again.”