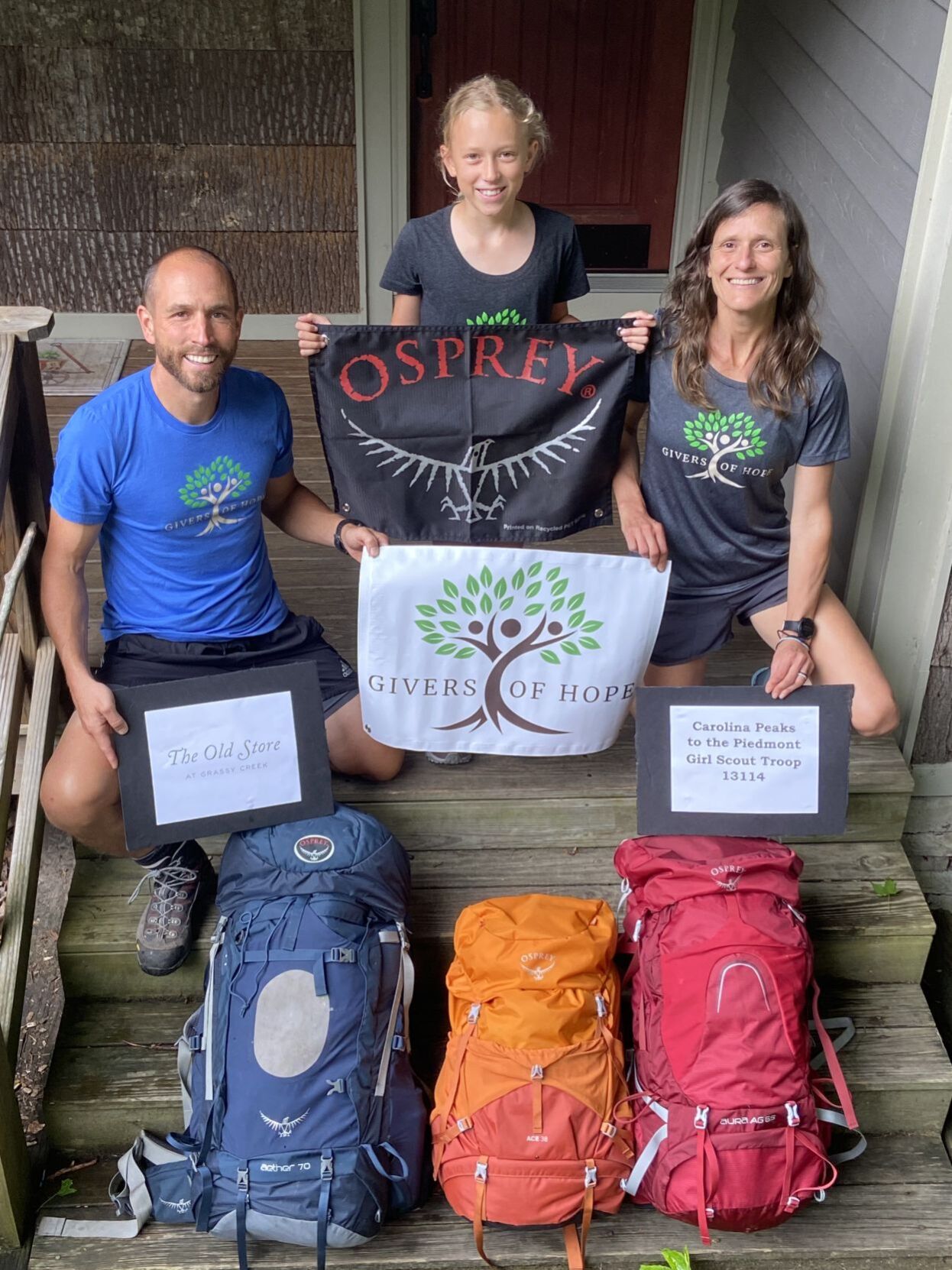 Ryan, Ayla and Jenna Crawley have received sponsorship from Osprey, Girl Scouts Troop 13114 and the Old Store at Grassy Creek along with community donations, all going toward the Hospitality House in Boone. 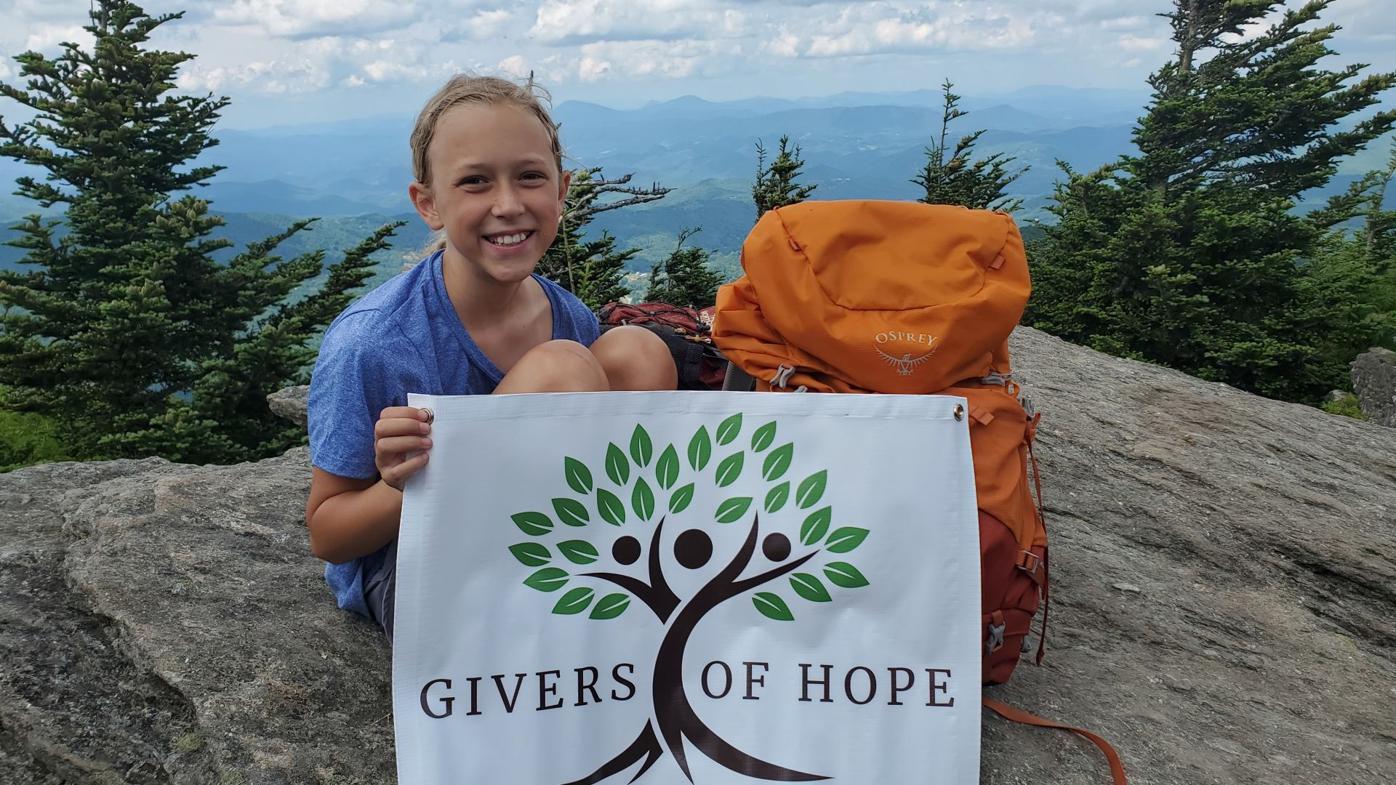 Preparing for a two-week trek on the Appalachian Trail, Ayla Crawley hiked the Profile Trail on Grandfather Mountain for some extra practice.

Ryan, Ayla and Jenna Crawley have received sponsorship from Osprey, Girl Scouts Troop 13114 and the Old Store at Grassy Creek along with community donations, all going toward the Hospitality House in Boone.

Preparing for a two-week trek on the Appalachian Trail, Ayla Crawley hiked the Profile Trail on Grandfather Mountain for some extra practice.

VALLE CRUSIS — One year after hiking the 76-mile Foothills Trail, the Crawley family of Ryan, Jenna and 9-year-old daughter Ayla have set their sights on a bigger target, a 102-mile section of the legendary Appalachian Trail.

Set to begin on Saturday, July 10, the two-week trek will not just be a summer adventure for the Valle Crusis School rising fifth-grader and her parents. The hike is also serving as a way to raise money for the Hospitality House in Boone, where Jenna Crawley has been a therapist since 2013.

“Ayla’s grown up knowing about (the Hospitality House),” Jenna Crawley said. “I remember her at 4-years-old sitting in the car just telling me one day how important it was. She was just sitting there telling me, ‘It’s so important; people need to have shelter, they need to have a place to live, they need to have food.’ She got it, she was very young and I think sometimes kids do get very simple things that we sometimes forget about as adults.”

The family was discussing plans for another long hike together when they came up with the idea of raising money in the process. Given the family’s relationship to the Hospitality House, the decision as to where they money would go was an easy one.

“I’ve always loved helping the Hospitality House since I was 7 and I did a lemonade stand for them,” Ayla Crawley said. “There’s a picture of me handing over money to one of the people who works at the Hospitality House, and ever since then they’ve sort of been my go-to people to donate to.”

What started as a family adventure had quickly transformed into something more. It became a movement called Givers of Hope, which set a fundraising goal of $3,000. The family was taken aback when they met the goal well in advance of their actual hike, reaching $4,000 on Wednesday, June 30.

“We originally set a $3,000 end goal. At first, I remember thinking, ‘OK, that’s a pretty good goal, I hope we get there,’” Ryan Crawley said. “I think what surprised me more was that we got to $3,000 in six days by just posting it on Facebook to our friends, so it was really neat to feel the support that we got from our friends and our community.”

The Crawley family then doubled their goal — now aiming to raise $6,600 — and money has continued to come in from community members and groups. Girl Scouts Troop 13114, of which Ayla Crawley is a member, donated $102 for a dollar-per-mile to sponsor miles 25-27, and the Old Store at Grassy Creek has sponsored miles 67-71.

As of July 2, all 102 miles have been sponsored, with more than 35 being sponsored twice over.

Ayla Crawley said the support from the community has been a big boost to their motivation, with failure not being an option in their eyes. Knowing that each individual mile has a sponsor, she said people are counting on them to complete their trek.

The family also reached out to Osprey — an international hiking gear company whose products the Crawleys have been using for years — who proceeded to supply the family for their trek. Ryan Crawley joked they were expecting a couple of free stickers, instead they are being fully stocked on gear with three extra backpacks to auction off, with the proceeds going to the Hospitality House.

Having the proper gear will be a much-needed boost, given the family’s plan is to cover eight miles every day on the Appalachian Trail.

The decision to hike part of the AT came from the family’s relationship to it as well. Ryan Crawley’s father, uncle and grandfather all hiked it, either all-the-way through or by section, while he has hiked thousands of miles on the trail.

“So I’ve hiked 2,200 miles of the whole trail, almost twice,” Ryan Crawley said. “Jen and I also worked at a wilderness school for at risk youth for eight years. So, being in the woods is very comfortable for us, and we’ve brought Ayla up in her nine years doing the same thing, spending a lot of time in the woods, camping, things like that.”

Planning ahead, the family will be carrying about three days worth of food with them at a time, picking up food drops along the way. With the experience, preparation and support, the Crawleys all said they feel great abut the hike and even better about the fundraising.

Ayla Crawley said the support they have received not only gives the family encouragement going into the hike, but also for their future endeavors.

“It’s really amazing,” she said. “Honestly, being able to pretty much do whatever I want, and help whatever organization or cause I want, it’s amazing.”

For more information about Givers of Hope, go to www.giversofhope.com. To donate, visit app.donorview.com/WbyNP.