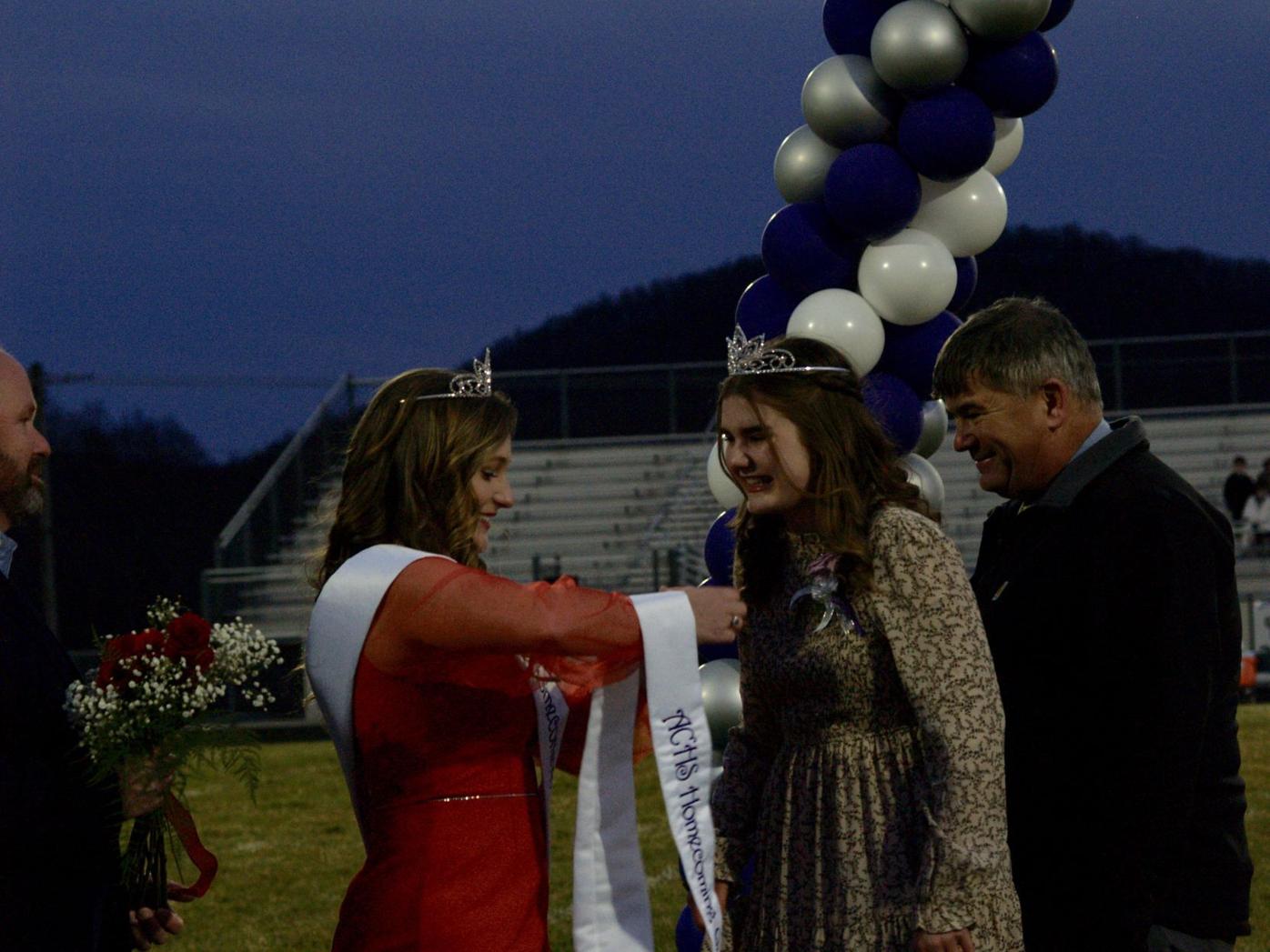 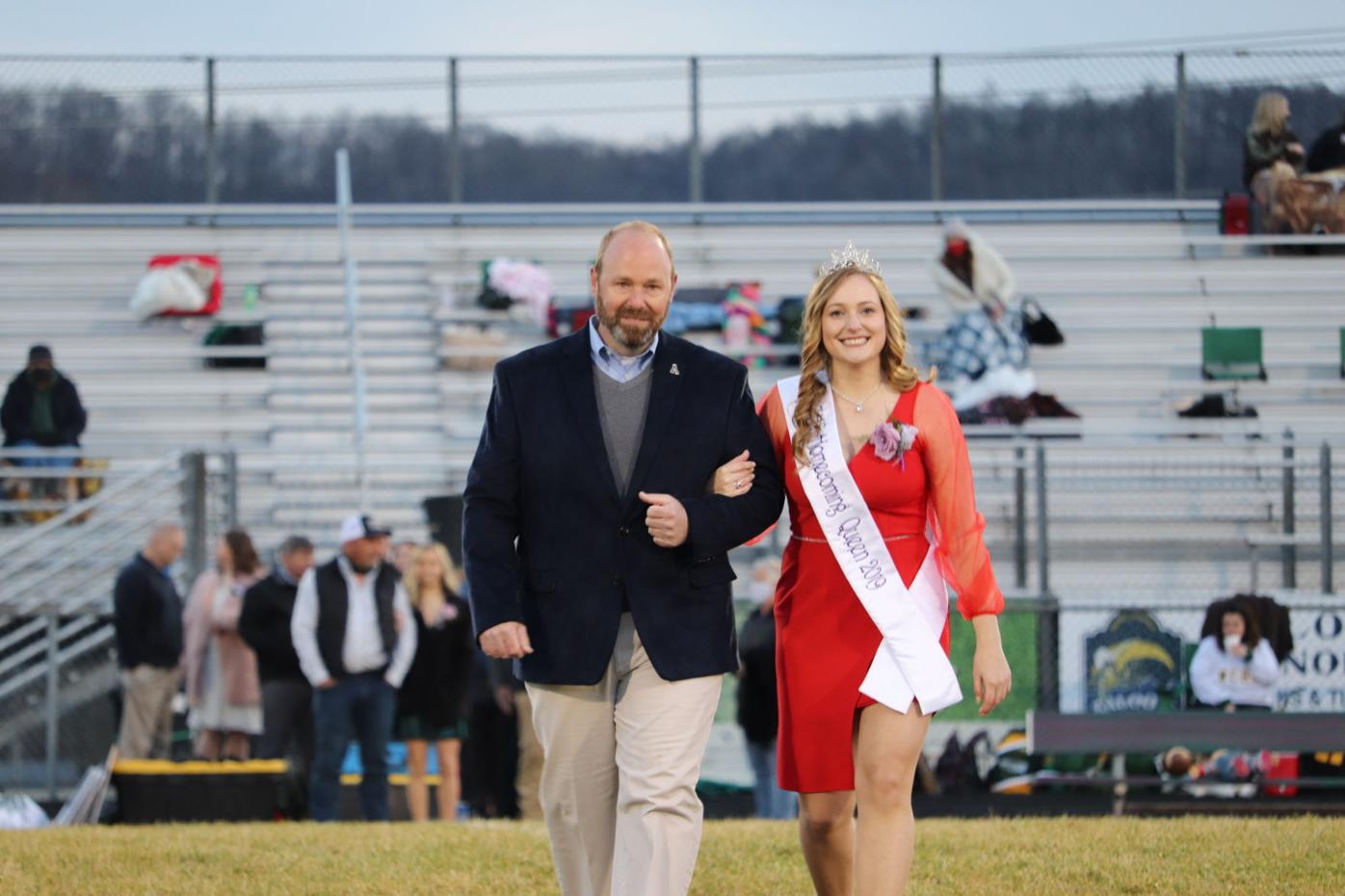 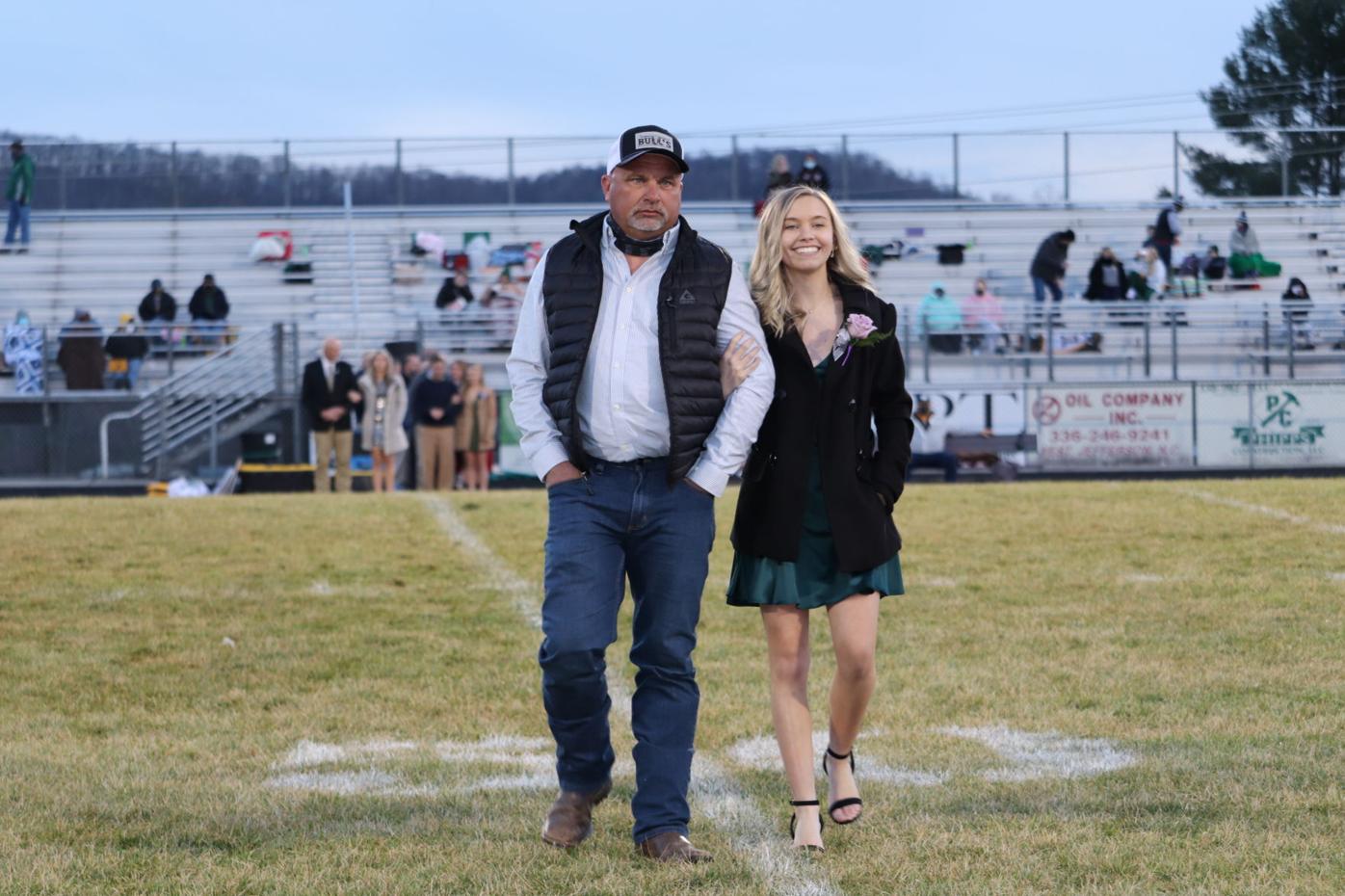 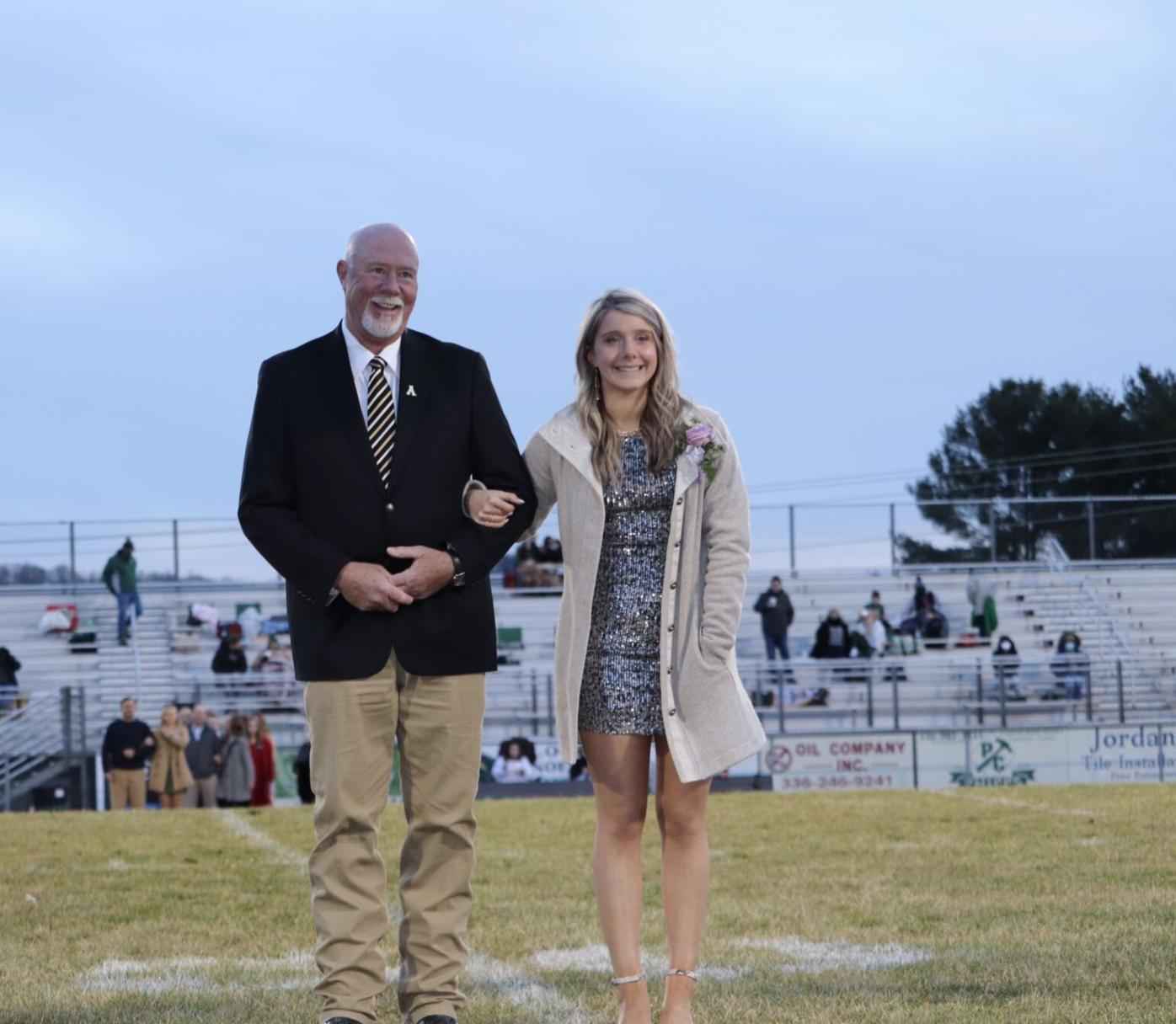 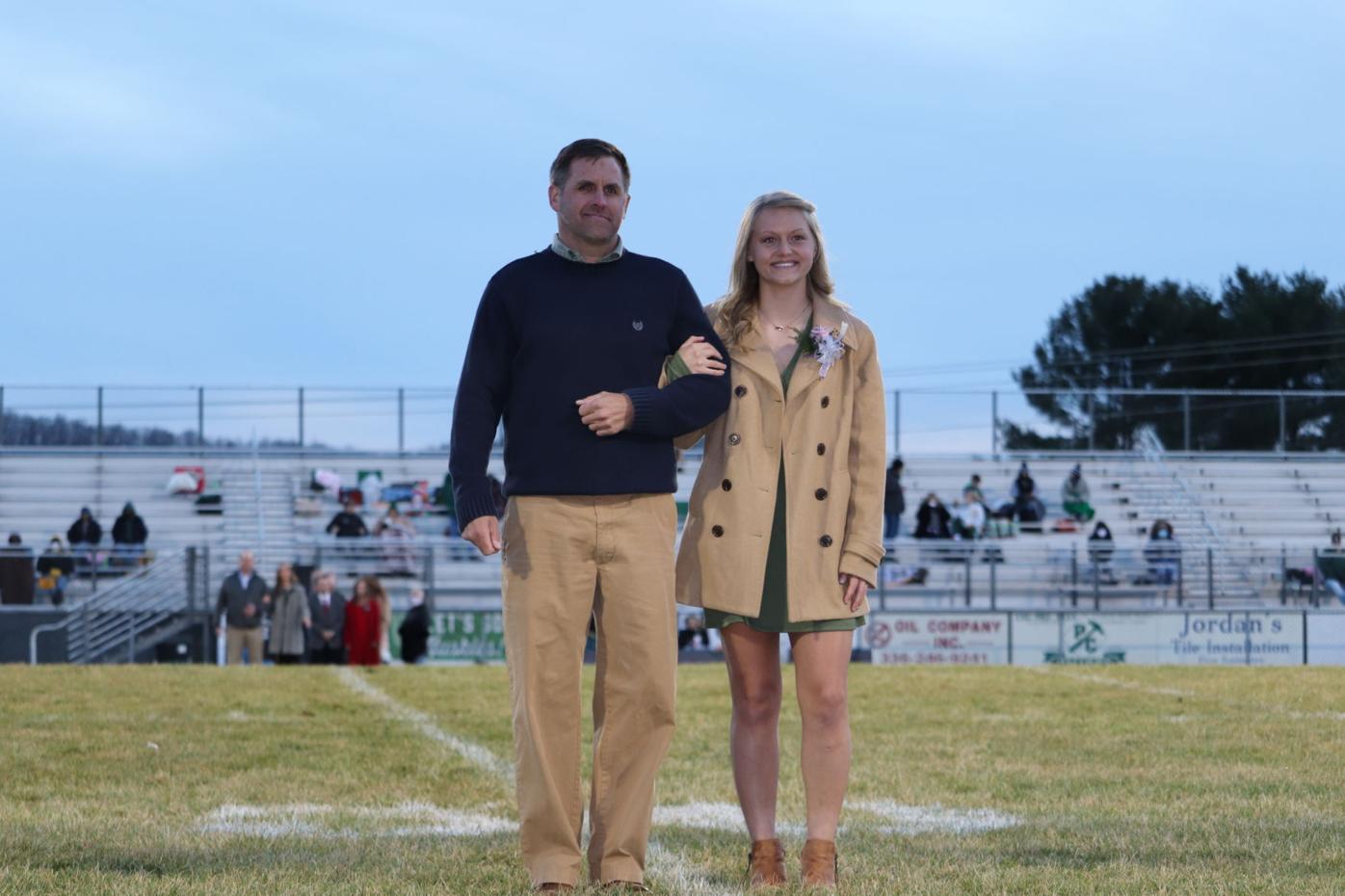 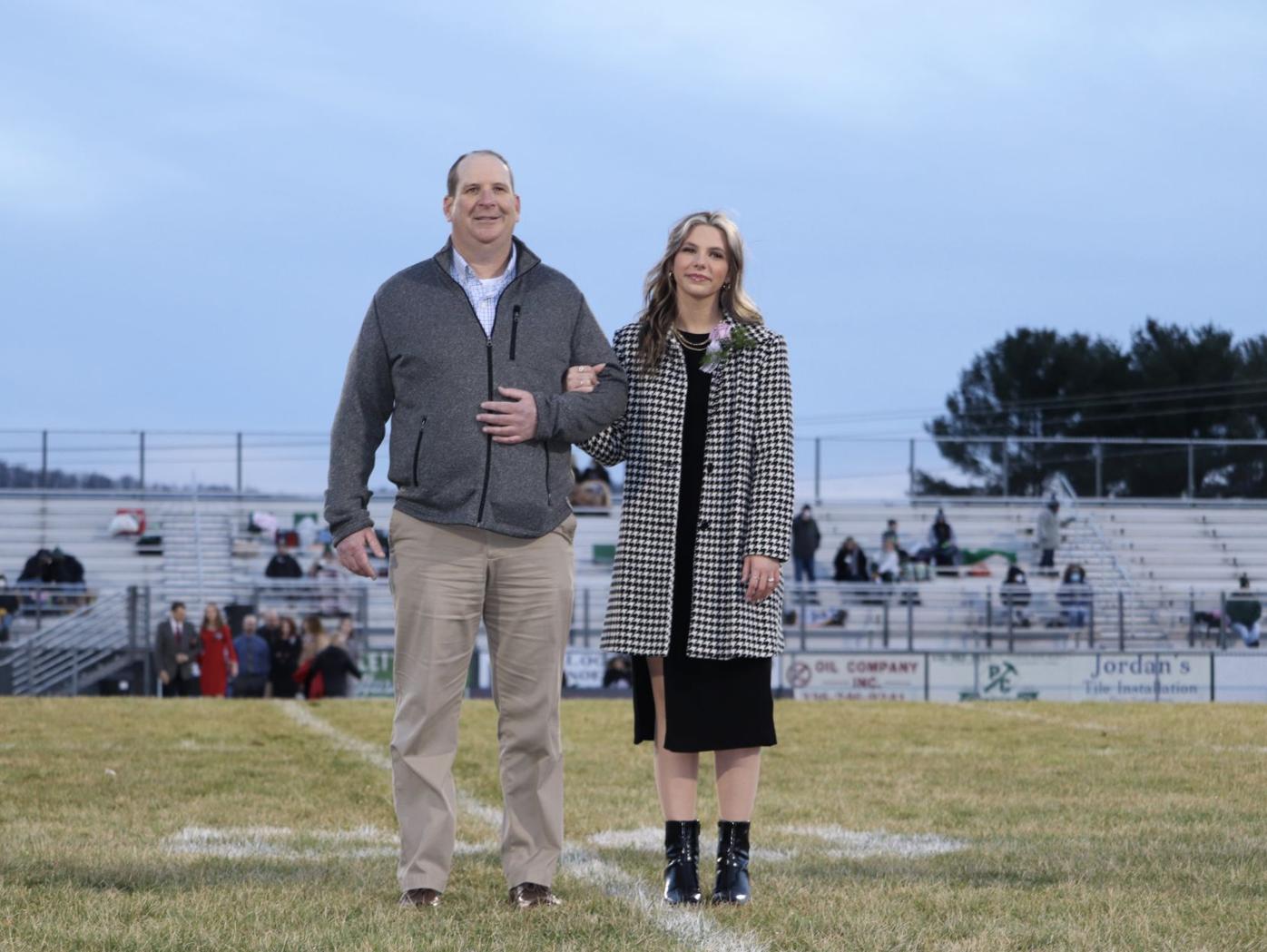 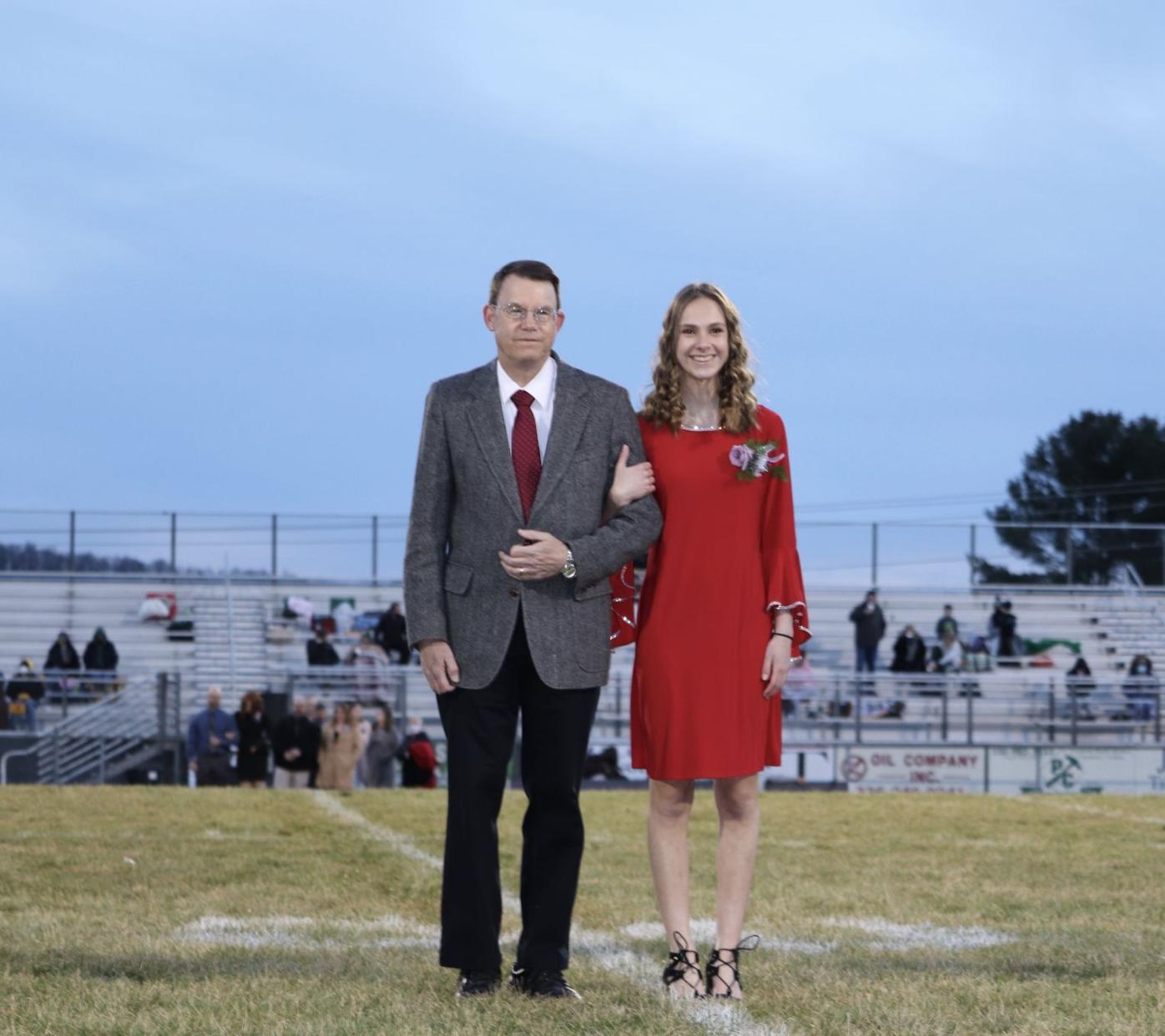 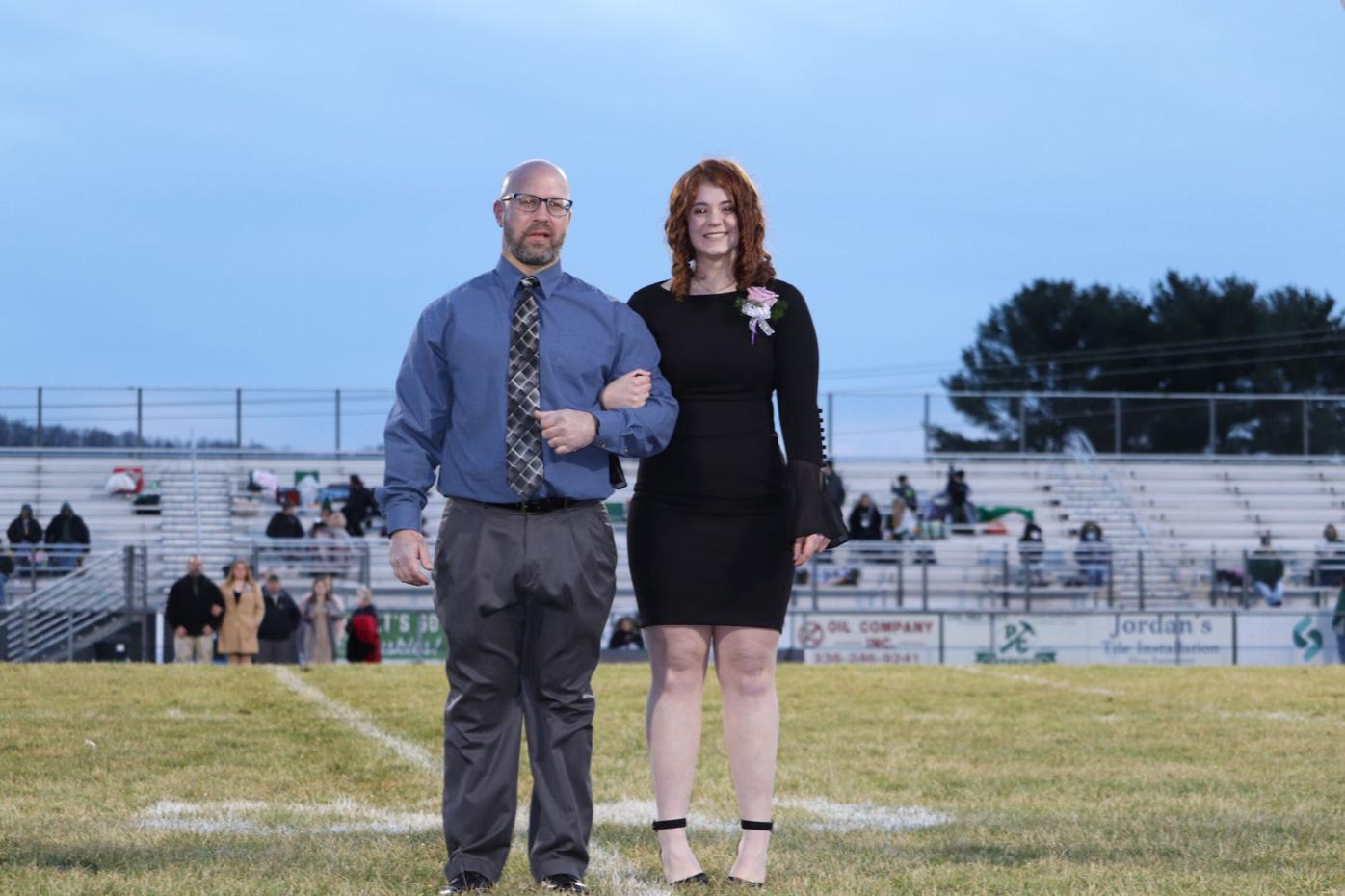 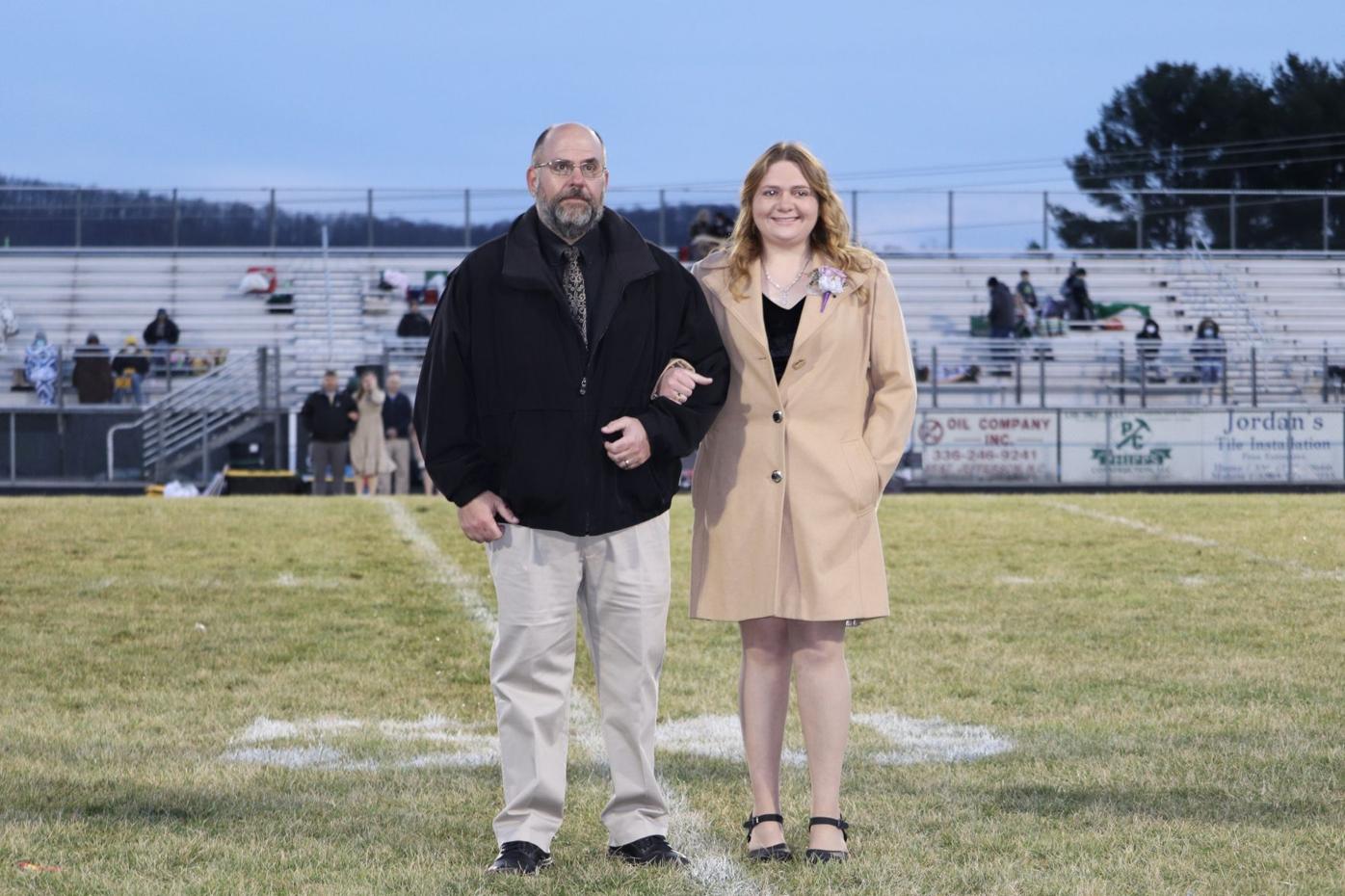 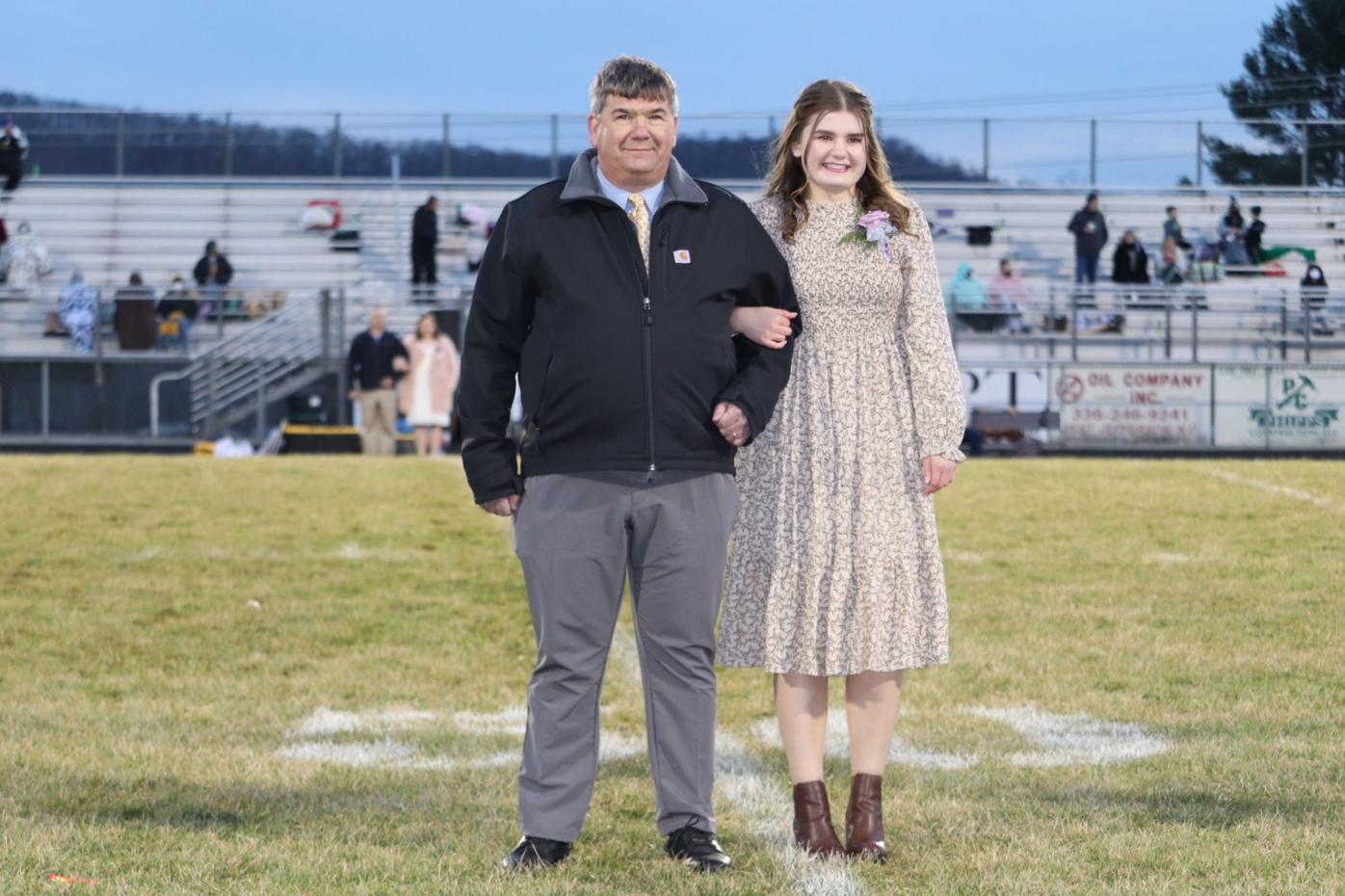 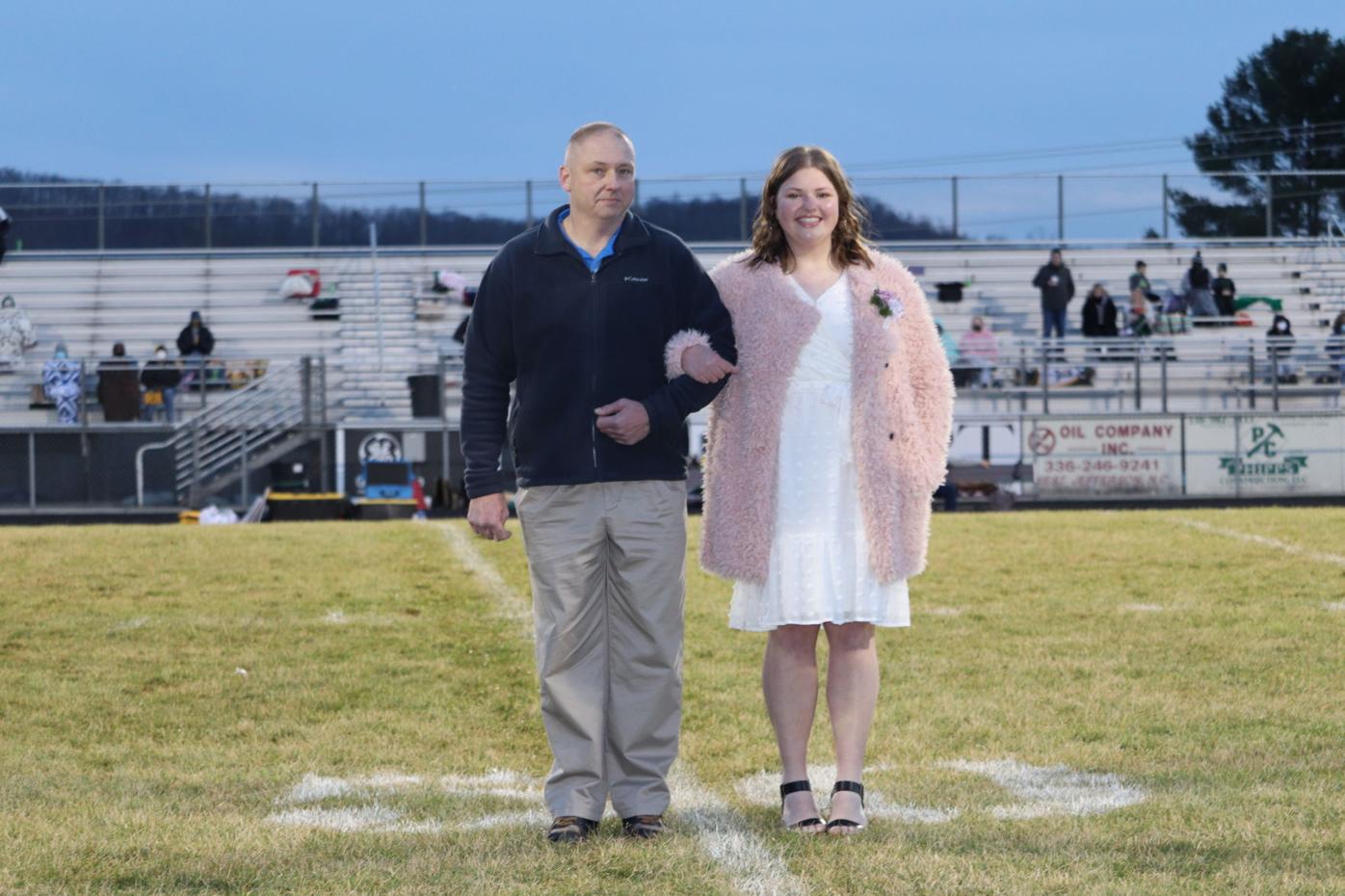 At halftime, two representatives from the freshman, sophomore and junior classes and three representatives from the senior class were escorted to the field by their fathers as the annual homecoming ceremony commenced. Previous Homecoming Queen Karoline Keith made the walk down the field first and later passed the crown onto the newly stated Queen.

Beginning the night, Keith, escorted by her father, Brent, was introduced. Keith now attends Appalachian State University and is majoring in Business Management.

The first freshman representative was Brooklyn P. Greer, escorted by her father, Jason. Greer plays tennis and enjoys making Tik Toks with her friends. Her goal in life is to spread happiness wherever she goes. She wishes to attend a four year university and become a physical therapist.

Madison T. Weaver was the second representative of the freshman class, escorted by her father, John. Weaver likes to kayak, travel, attend App State football games and spend time with her family and friends. She is a member of the ACHS Husky volleyball team. Her goal in life is to always be kind, keep God and family first, embrace every up and down and use them to grow into a better person.

Representing the sophomore class, Jezik A. Martin was escorted by her father, Chris. She enjoys traveling, playing sports, spending time outside and with her family and friends. She is a member of the ACHS varsity soccer team and indoor track team. Her goal in life is to be happy, travel to as many places as possible and have a job that she enjoys.

The next sophomore representative was Lindsey P. Robinson, escorted by her father, Scott. She enjoys photography, exploring new fashion trends and watching the sun rise. She is a member of the ACHS volleyball team and swim team, where she has earned the distinction of All-Conference for the past two years. Her goal in life is to travel, become a professional photographer and live in New York City.

Lacie J. Allen was the first junior representative, escorted by her father, Steve. In her free time, she enjoys reading, traveling, hiking, playing sports, helping others in the community, volunteering at Appalachian Church and spending time with her family and friends. She is a member of the JV basketball team, soccer team and swim team. Her goal in life is to be a leader who influences others with kindness and respect.

Rounding out the junior representatives, Charlee A. Graybeal was escorted by her father, Thomas. She enjoys playing basketball, playing with her puppy Axel and spending time with her friends. She has represented ACHS on the volleyball and basketball teams. Her goal in life is to leave behind all expectations and live her life according to her values.

To begin the senior representatives for Homecoming Queen, Autumn B. Blackburn took to the field with her father, David. Baking, volunteering in the community and spending time with her friends are her favorite hobbies. She is the senior class president of Student Council and the president of the Interact Club. At ACHS, she is a member of the tennis team. Her goal in life is to become half the woman her mother is. Appalachian State University is her college of choice after graduation.

Maura B. Coldiron was then escorted by her father, Shea. In her free time, she enjoys swimming, running, yoga and hanging out with her family and friends. She participates in cross country, swim and track at ACHS. Following Dolly Parton’s quote, “find out who you are and do it on purpose,” she wishes to follow her dreams to Appalachian State University and major in Communication Sciences and Disorders.

To end the representatives, Braylin F. Miller walked down the field with her father, Chris. She sings in her church’s worship team, travels on mission trips, plays the guitar, plays tennis and enjoys hanging out with her friends. She has held the positions of parliamentarian and reporter for the ACHS FFA chapter. After graduation, she will attend Liberty University to study Zoo and Wildlife Biology and minor in youth ministry or worship leadership. Her plans include starting a ministry for high school and college students.

After the ladies took their spots on the field, Maura Coldiron was announced as the 2020-21 Homecoming Queen.