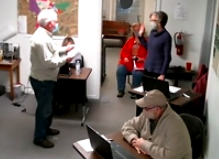 Anita Greenwood is sworn in by Mayor Mack Powers at the Feb. 9 meeting of the Lansing Board of Aldermen. 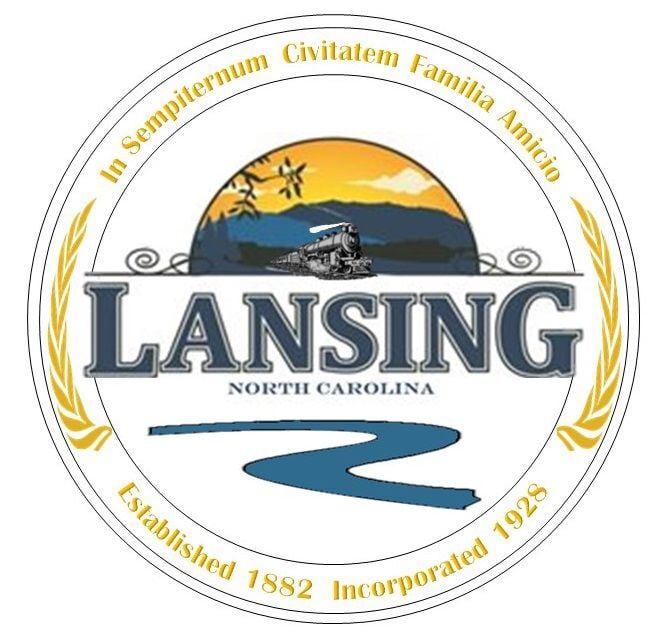 Anita Greenwood is sworn in by Mayor Mack Powers at the Feb. 9 meeting of the Lansing Board of Aldermen.

LANSING — The Lansing Board of Aldermen held its regularly scheduled monthly meeting on Feb. 9 virtually via Zoom due to COVID-19 precautions.

Anita Greenwood was sworn in at the meeting by Mayor Mack Powers, filling the vacant position on the board. Former alderwoman Cheyenne Blevins announced her resignation at the Jan. 12 meeting due to plans to relocate to Tennessee.

There were no public comments during the meeting.

Greater Lansing Area Development addressed the board with a presentation about about their proposed master beautification plan.

Project Manager René Shuford addressed the board, highlighting all of the plans in extensive detail.

The goals for the MBP for Lansing are to instill pride in the community, create a welcoming atmosphere and encourage people to stop and play.

The first action mentioned in the presentation was relocating and burying power lines because they distract from scenic vistas. This will be a major project both physically and financially. According to Shuford, this would require county engineering support and possible funding from NC Main Street.

The second action would be to revamp parking in the town by defining parking so it will not impede traffic. Some ways that GLAD plans to do this is to install directional signs to off-site parking and create one-way parking north of the fire station. According to Shuford, this would require some possible funding from NCDOT.

Another topic of discussion was the median located on the West side of N.C. 194. The MBP would aim to create a streetscape improvement that includes the installation of crosswalks and plantings in front of the town-owned parking lot. According to Shuford, this would use some possible funding from NCDOT.

The beautification plan also seeks to beautify the barbecue pit and area at Lansing Creeper Trail Park. GLAD would like to seek funding to replace the barbecue pit’s roof. This project would also include repainting the boxcar storage and mural, repairing the Lansing Creeper Trail sign and painting the Little Free Library box. According to Shuford, this would require possible funding from NC Main Street.

Another focus of the MBP would be litter control. This would be part of the Adopt-A-Highway program and Keep Lansing Beautiful. This would be made possible through funding from Keep America Beautiful and GLAD would like to install public recycling receptacles and trash receptacles in town. Shuford said there are numerous grants through the state available to purchase these receptacles.

Another goal of the beautification plan would be to plant flowers, which Shuford said they have already started doing. They would like to plant perennials by “Welcome to Lansing” signs and add hanging baskets around town. Another action would be to place flower boxes on the pedestrian bridges. According to Shuford, this would be done through possible funding from NC Main Street.

Through the MBP, GLAD would also like to maintain and add signage throughout the town. One goal is to add way finding signs to highlight local businesses and area attractions. Shuford said they would also like to repaint and maintain existing signs at the town and Creeper Trail entry points. According to Shuford, they also want to encourage local businesses to implement attractive signage on their storefronts. This will be also be made possible by funding from NC Main Street.

The MBP also has an outline to improve walking trails and bikeways. These particular plans would support implementation of the NCDOT Pedestrian Plan to connect Lansing Park, Lost Province Center for the Cultural Arts and Big Horse Creek. It would also provide support for the Warrensville-Lansing Connector Trail. According to Shuford, this will be through possible funding from LWCA, National Recreation Trails Program and the High Country Council of Governments.

Another main focus of the MBP would be to help beautify businesses in Lansing. According to Shuford, GLAD will support actions to improve the appearance of businesses along Main Street which includes painting, fencing and signage.

Another goal of the proposed beautification plans is to support initiatives to relocate Town Hall to Main Street so it is easier to find.

The final of proposed action plans included in the MBP was Lansing Creeper Trail Park. According to Shuford, GLAD would like to repair Frenchie’s mural and further support art, gardening and events in the park. Some other ideas include native plant gardens, education programs for students and adults, adding flowers and pumpkins to community gardens, cleaning up and maintaining existing art and supporting new art initiatives. Another proposed idea is to rename Marcy Lane to something associated with the park instead of an individual.

At the end of the presentation were listed existing plans. These include the 2019 Land Use Plan, Lansing Pedestrian Plan (to be replaced by Bike/Steering Committee), High Country Regional Trail Plan (prepared by HCCOG and NC State Trails Program) and the Town of Lansing’s five-year Economic Development Strategic Plan for 2018-2022.

Shuford also provided a list of a few resources for funding at the federal, national and state level. Sources at the federal level included The National Recreational Trails Fund Program, Land and Water Conservation Fund and the Department of Housing and Urban Development. At the national level there is Keep America Beautiful (Coca-Cola Public Spaces Recycling Grant). At the state level there is NCDOT, NC State Historic Preservation Office, the NC Land and Water Fund and the NC Main Street and Rural Planning Center.

Following the presentation, the board voted unanimously for GLAD to move forward with the proposed beautification plans.

The next meeting of the Lansing board of aldermen will be held on March 9 at 6 p.m.