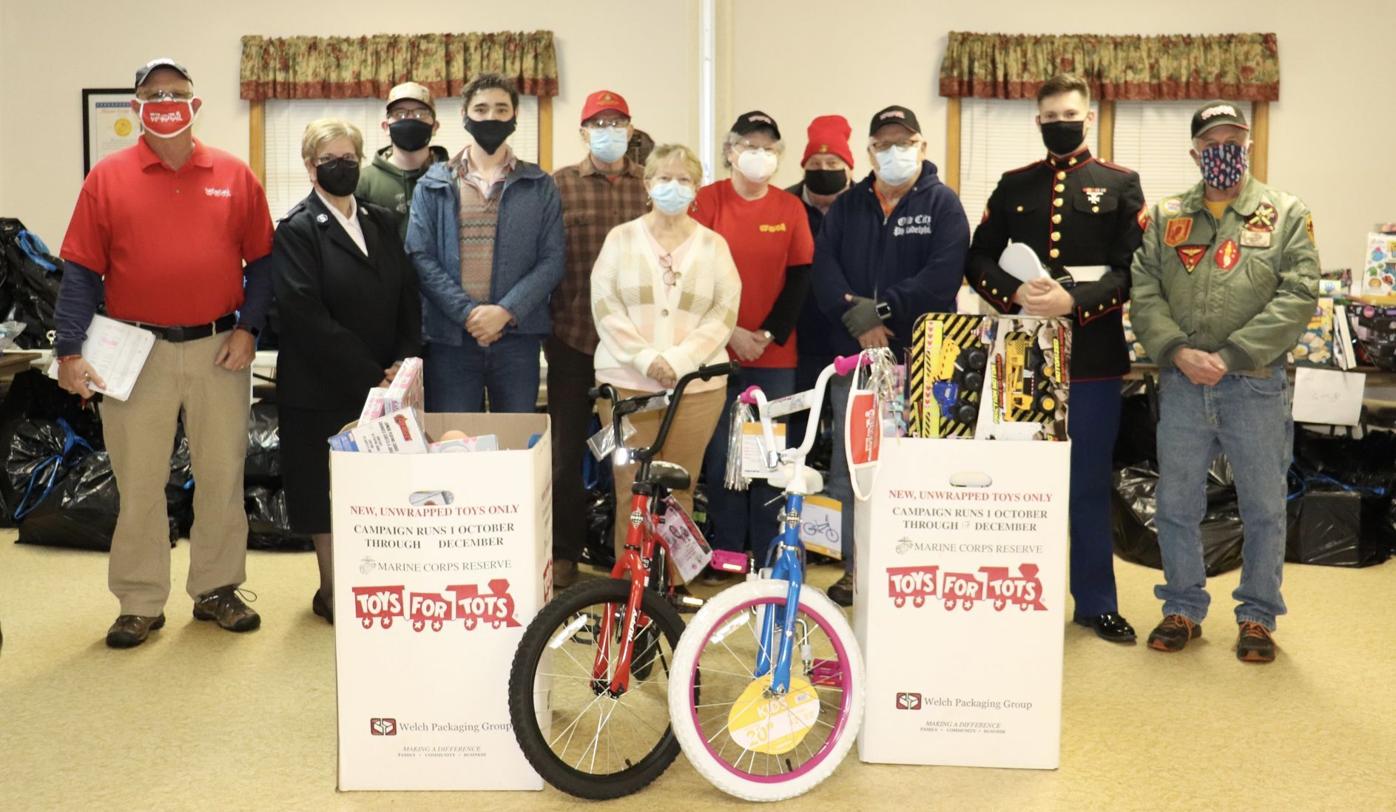 JEFFERSON — Bringing joy to local children in need and their families each year nationwide is the Toys for Tots program. Locally, in Ashe County, program is run by the Marine Corps League #1389 High Country Detachment.

This year, parents and guardians were given a scheduled time to pick up their family’s bag(s) of toys from 5 to 7 p.m. on Dec. 17 and 18. Any families who were unable to pick up items on Thursday or Friday were able to go by on the morning of Dec. 19. Appointments were scheduled using 15-minute time slots.

The Salvation Army also hosts a food giveaway each year during the holiday season and this year they distributed the food boxes at the same time as the Toys for Tots program.

A box was given to each vehicle that participated in the Toys for Tots program.

Sindy Connell of the Salvation Army said she and Ashe’s Toys for Tots coordinator Luke Whichard collaborated for this year’s event. Connell said they discovered that the toy aspect was covered, so they decided to join forces and focus on providing food for families in need. They did so by incorporating a “Be An Angel” Christmas Tree in the county’s Salvation Army store in Jefferson.

“Our customers got an opportunity to adopt an angel and leave money there at the store in order to purchase those boxes,” Connell said. “In the boxes is enough food and a ham to feed at least a family of five for Christmas.”

Connell added that Salvation Army was excited to work with Toys for Tots and she hopes it is something they can continue to do each year from now on.

The Toys for Tots program in Ashe County began in 2015 with the guidance of the Prims. The meetings used to be held at the Log House Restaurant in downtown West Jefferson.

Each year the program has grown. According to information provided by Whichard, the program began with 75 kids and increased to 220 in 2019.

The detachment gets the names of families and children from Ashe County Schools counselors, concerned citizens and those who sign up through the Toys for Tots website.

The program is carried out each year by all local volunteers and space is provided by businesses and churches. Any warehouse storage is provided to Toys for Tots at a discounted price.

Barbara Prim, whose late husband, Jim, was the former detachment commandant, was present and shared some information about Toys for Tots’ local impact.

Prim said they receive some toys through Toys for Tots and they also collect a lot of toys from different places.

“It is such a good thing,” Prim said.

Lance Corporal Reece Horbury, who lives in Boone, was present during the distribution in his dress blues.

According to troop member Gerry Bebber, all volunteers spent two days pre-wrapping the gifts and sorting them by age group and gender. In previous years, people were able to come into the church and pick up the bags of toys. Due to current COVID-19 regulations, bags of toys were carried to cars this year.

Tom “Tugboat” Northrop said sometimes the toy distribution can get emotional but this year it is different due to not being able to have contact with parents due to COVID.

“It is just a good feeling to know what we do every year, the Marine Corps league is very community oriented,” Northrop said. “Everything that we can we do for our community.”

Toys for Tots “Boiler Plate” Narrative Toys for Tots, a 73-year national charitable program run by the U.S. Marine Corps Reserve, provides happiness and hope to disadvantaged children during each Christmas holiday season. The toys, books and other gifts collected and distributed by the Marines offer these children recognition, confidence and a positive memory for a lifetime. It is such experiences that help children become responsible citizens and caring members of their community. Last year the Marine Corps fulfilled the holiday hopes and dreams of 7 million less fortunate children in over 800 communities nationwide. Since 1947 over 265 million children have been assisted.