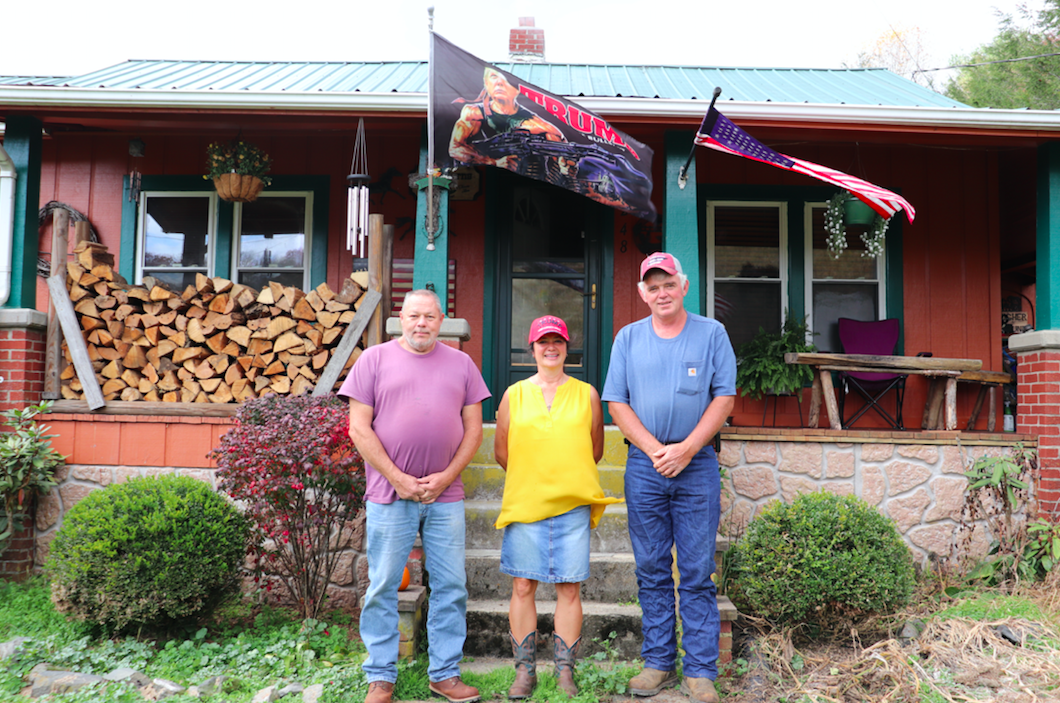 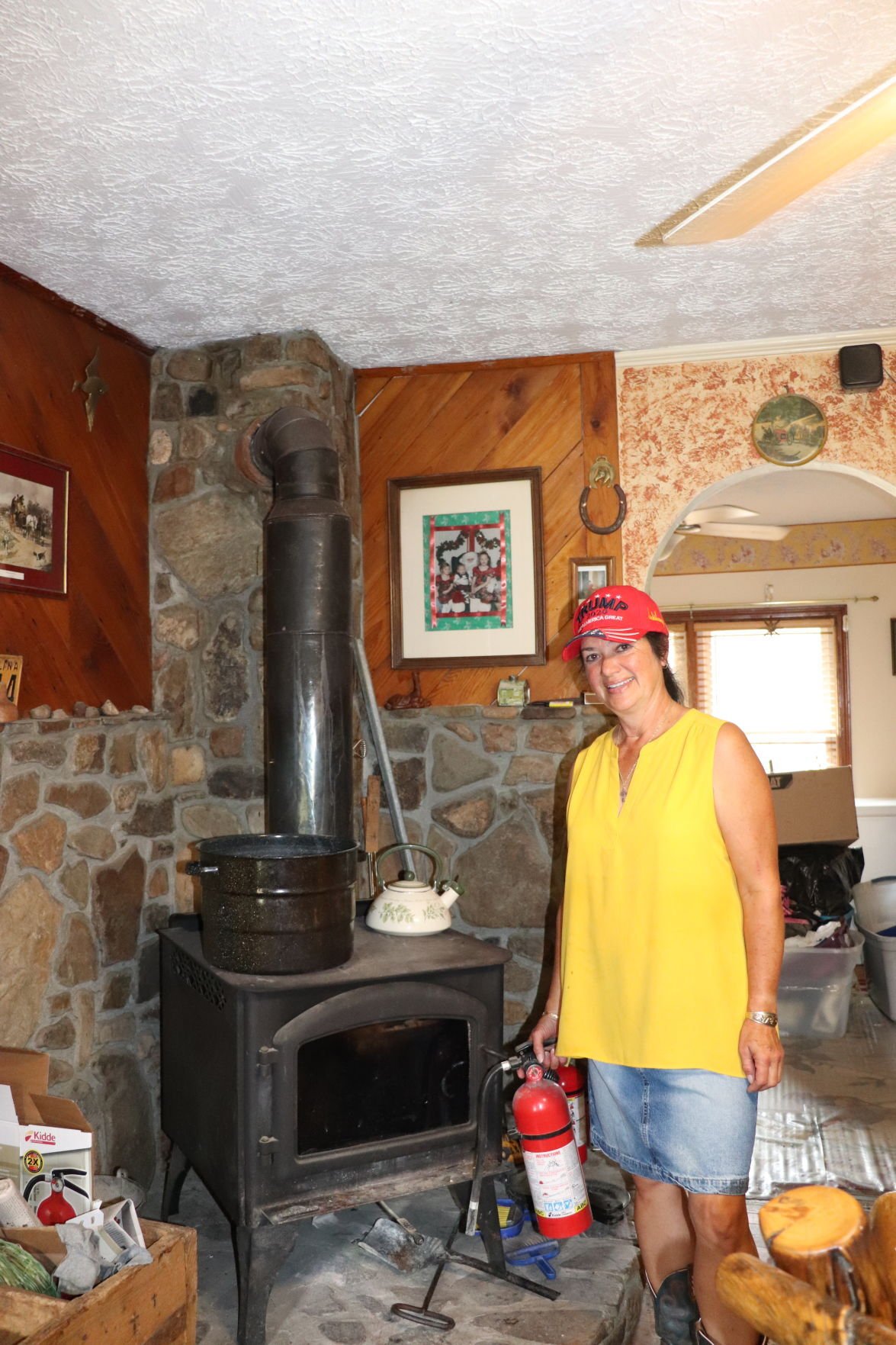 Creston resident Tomme Ann Harless stands beside her wood-burning stove where the fire began on Oct. 4.

Creston resident Tomme Ann Harless stands beside her wood-burning stove where the fire began on Oct. 4.

CRESTON — After responding to a house fire at the beginning of the month at Higher Ground farm near the Tennessee line, three local volunteer fire departments will each receive a $2,500 check from ADT Security.

She ran outside to confirm the fire and she said she could tell by the burnt creosote smell and the yellowish-black color of the thick smoke coming from the chimney.

According to Harless, her ADT alarm system sensor contacted the company’s central station and she received phone calls from both ADT and local dispatch.

To further ensure the removal of all of the creosote present in the chimney, the firefighters and Harless completely emptied the stove.

According to Harless, the aftermath of the fire was overwhelming and the entire room where the stove is located was covered in soot as well as the debris from the fire extinguisher.

“I was very grateful that they were willing to clean it, because they all have lives and they don’t get paid,” Harless said. “They are volunteers, they are taking time out of their life to come help their neighbor.”

Director of Public Relations for ADT Security, Bob Tucker shared some of the details about the monetary gift.

According to Tucker, ADT monitored alarm systems feature both a burglar alarm and a smoke detector connected wirelessly to the company’s six monitored centers. When Harless’ smoke detector sensed the presence of smoke, it sent a signal to the center located in Jacksonville, Fla. The emergency dispatch agent who received the signal saw something was happening at Harless’ home in Creston and contacted her. After confirming with Harless that there was a fire in her chimney, the dispatcher called 9-1-1 on her behalf and the three fire departments were dispatched to her home.

“We like to recognize first responders for the great work that they do and we do this many times around the country with providing monetary recognition through our ADT Lifesaver Program,” Tucker said.

Each department will receive a check, with no strings attached, giving them the ability to spend the money however they choose for things such as training or equipment.

Tucker said on Oct. 20 that they were in the process of completing paperwork and plan for departments to receive the checks by the end of the month.

According to Tucker, since it was a Sunday morning, several of the volunteers who responded to the fire at Harless’ residence left church services they were attending and showed up in church clothes, with one of the female firefighters arriving in a dress and high heels.

“ADT is pleased and proud to recognize these volunteer firefighters who are true heroes of the community and help come to the rescue for our customer in a time of need,” Tucker said.

After the event on Oct. 4, Harless received a phone call from ADT about the upcoming donation, which totals $7,500 and will be divided among the three fire departments.

Harless said the donation is much appreciated, but very unexpected. When she contacted Pond Mountain Fire Chief Lee Denny, Creston Fire Chief Junior Seatz and Warrensville Fire Chief Brian Ashley to inform them of the news they were all just as surprised as she was.

“This is something that has never happened before, it is very nice and thoughtful of them to do that,” Ashley said about the donation.

Seatz said he was glad he and his department could help on Oct. 4 and said receiving the donation is a new experience for all of them and it will greatly help them continue to serve the community.

“One of my members got there first because he just lives there below her and he said that he could tell the chimney was on fire because it was burning out the top of the flue when he got there,” Denny said about the morning of the fire. “He just got on the radio and told us we needed to come on.”

Harless stressed that there is a lack of funding for volunteers and encouraged those that feel inclined to do so to make donations to local fire departments.

Harless, along with Denny and Seatz provided tips about fire safety and chimney and stove maintenance.

They recommended having a fire extinguisher handy, smoke detectors installed and regularly replacing the batteries and completing preventative maintenance such as regularly cleaning chimney flues. Those unable to complete cleaning themselves can contact local fire departments for assistance.

She added that burning sappy woods such as Pine, will generate a lot of creosote that will build up in chimney flues and catch fire.

On Sept. 23, 2010, Harless had a near-fatal accident on her farm. She was wall-stacking round bales of hay, each weighing approximately 1,200 pounds, in her silage pit. Some of the hay fell on top of Harless, crushing her pelvis and the cell phone that was on her side. She was left paralyzed from the waist down as a result.

After much prayer, she was able to take her hands and dig herself a small space in the hay and rotate herself onto her belly. She then dragged herself 83 feet using her elbows from the silage pit across her pasture and back underneath her hay trailer to avoid being trampled on by her cattle and dehydration from the sun. It was 85 degrees outside at the time and she laid there for approximately six hours before help arrived.

During the incident, she tried multiple times to get her phone to turn on, removing the battery and trying to get it to reboot. None of her actions had an effect on the phone and she continued praying for God to send someone to find her or realize she was missing.

Creston VFD and Pond Mountain VFD were first on the scene to assist Harless.

All county fire departments could all use more volunteers for both fire and rescue situations and those who are interested are encouraged to contact Denny at (336) 620-2841 or Seatz at (336) 620-1965.