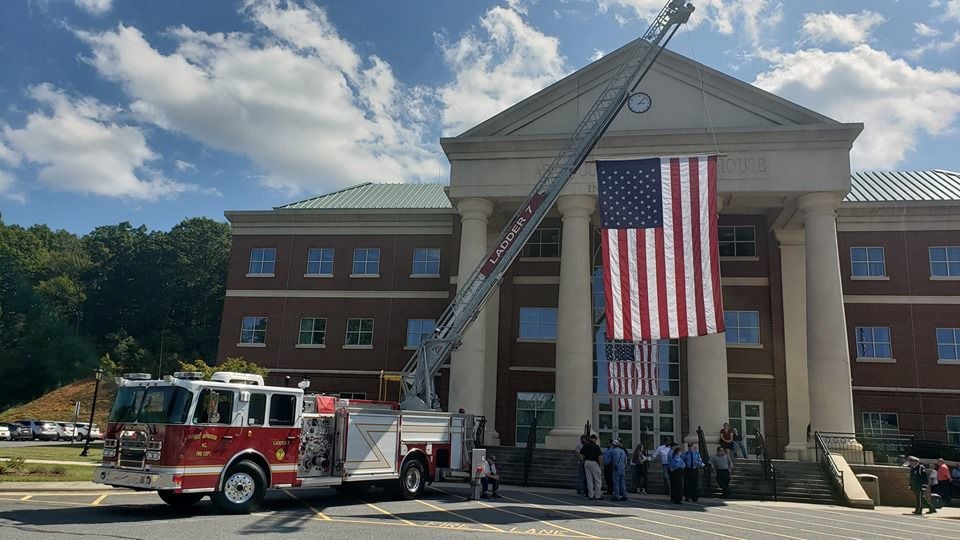 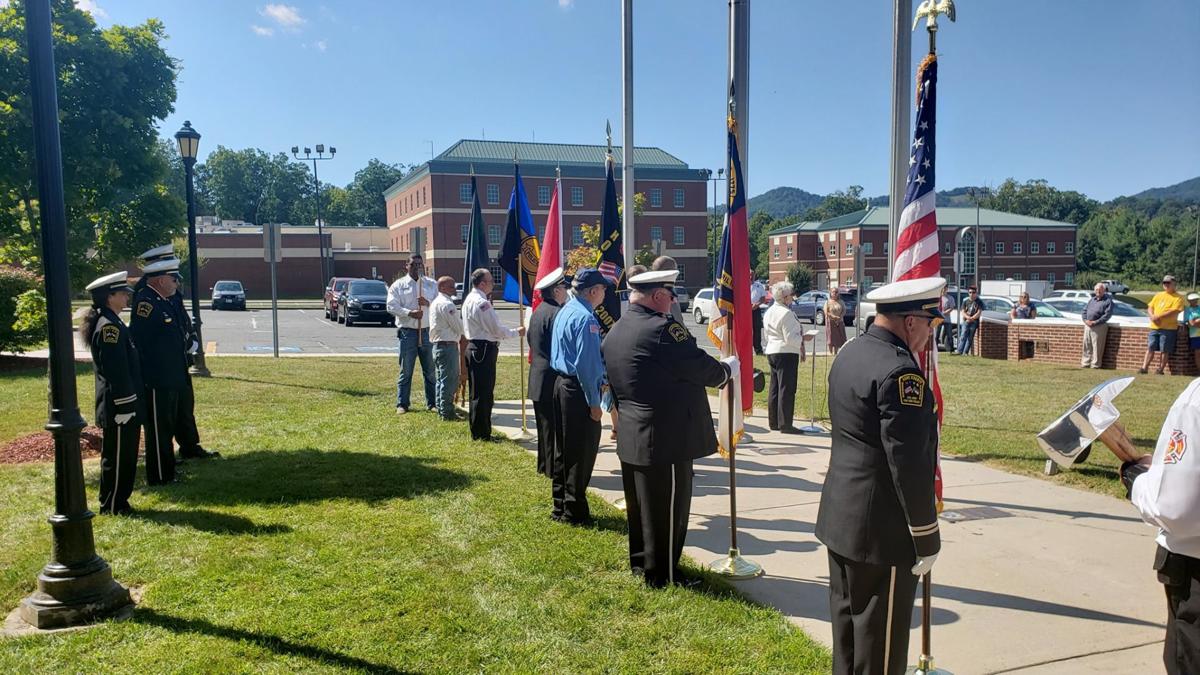 The Ashe County Honor Guard presents the colors during the 9/11 memorial service held at the Ashe County Courthouse Sunday, Sept. 8. 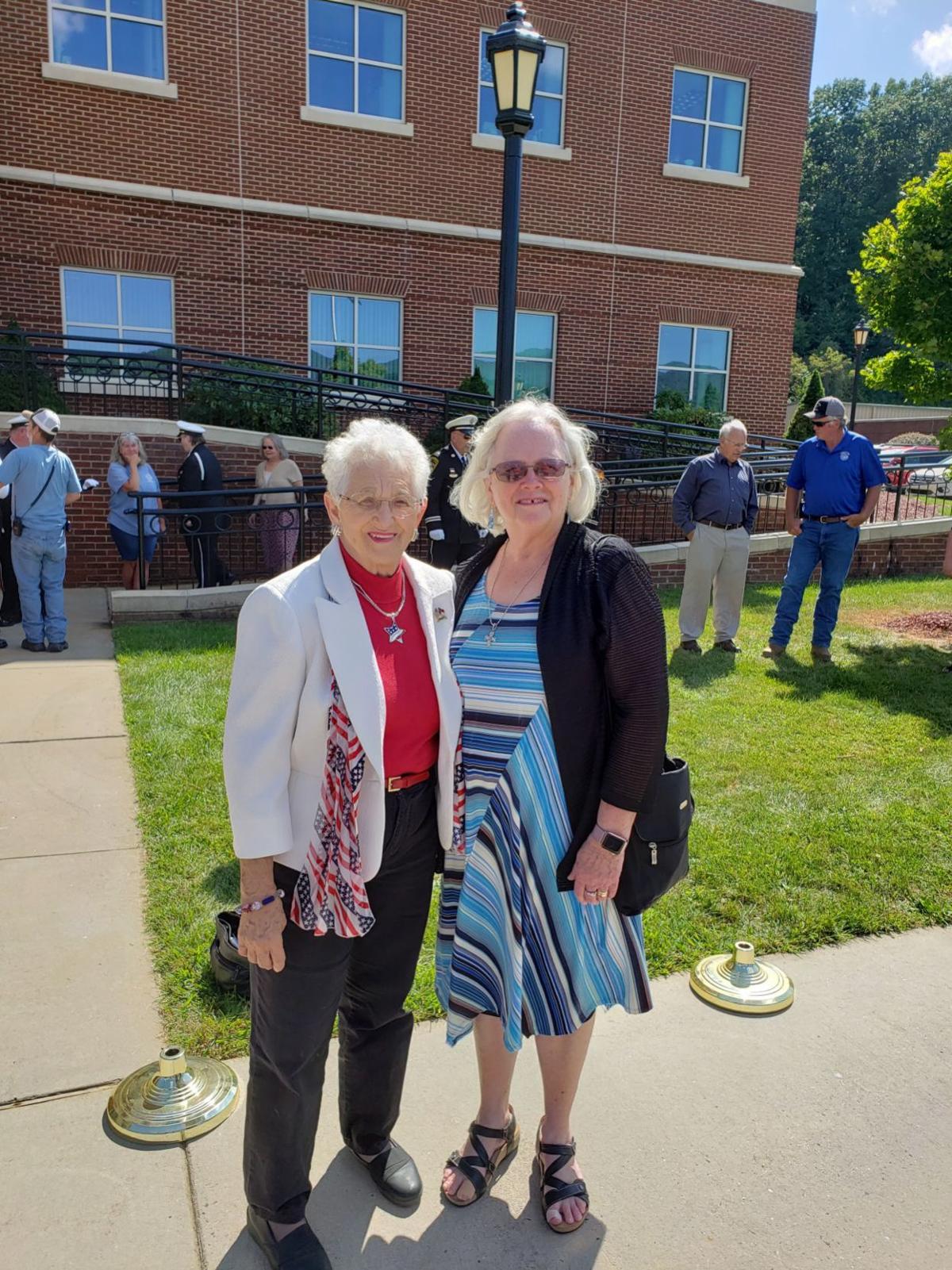 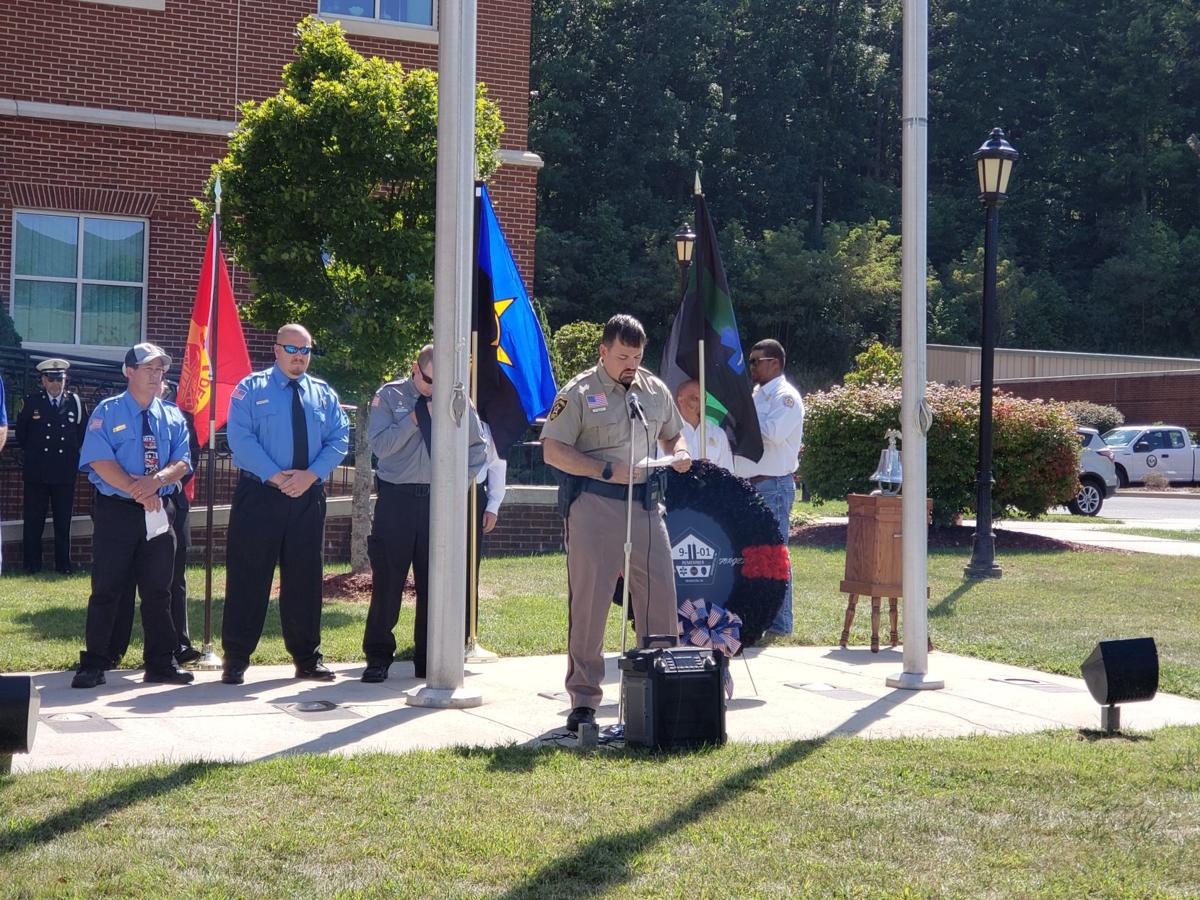 Sheriff B. Phil Howell reads the times of key moments on 9/11 during the service held Sunday, Sept. 8. 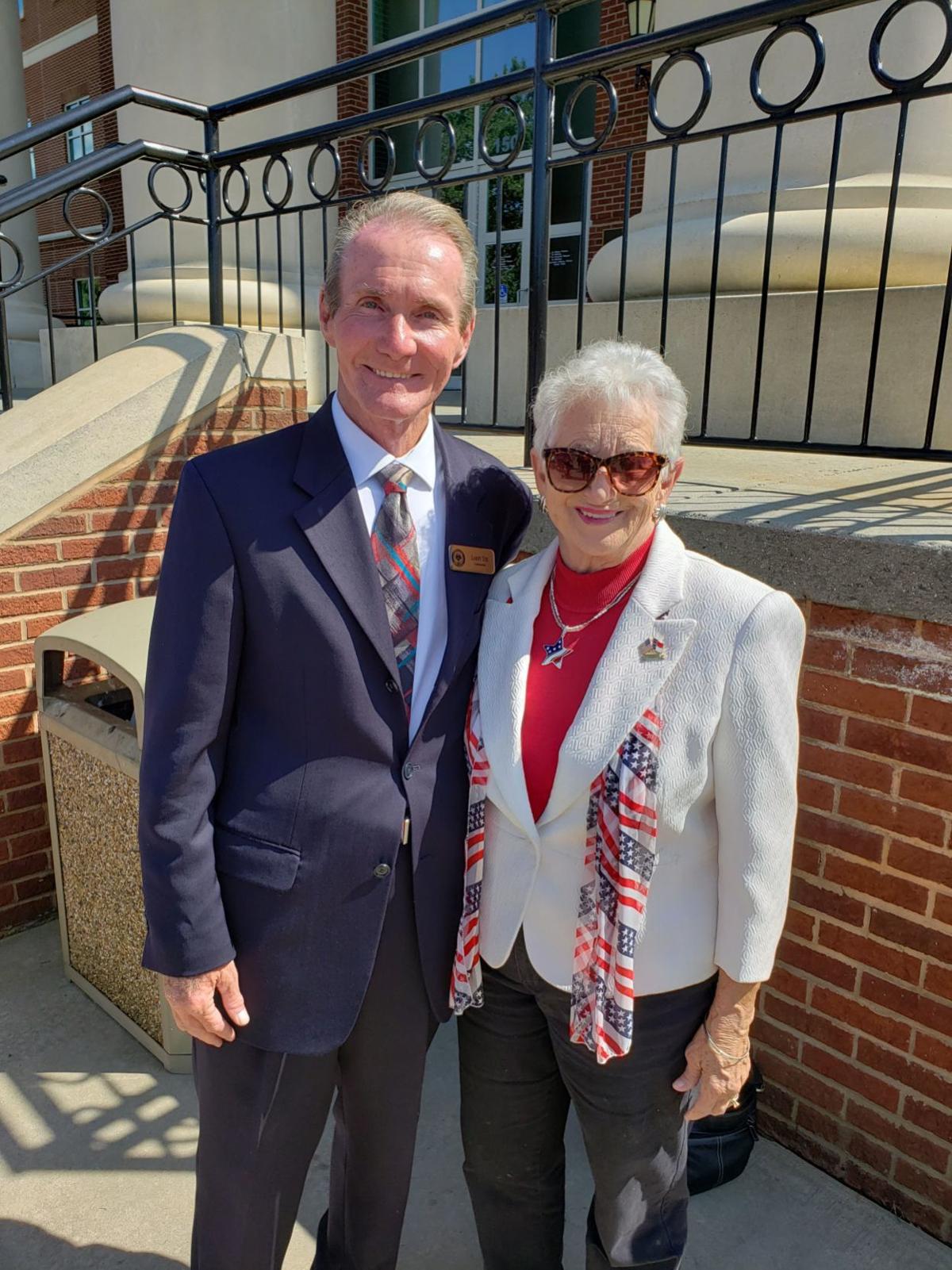 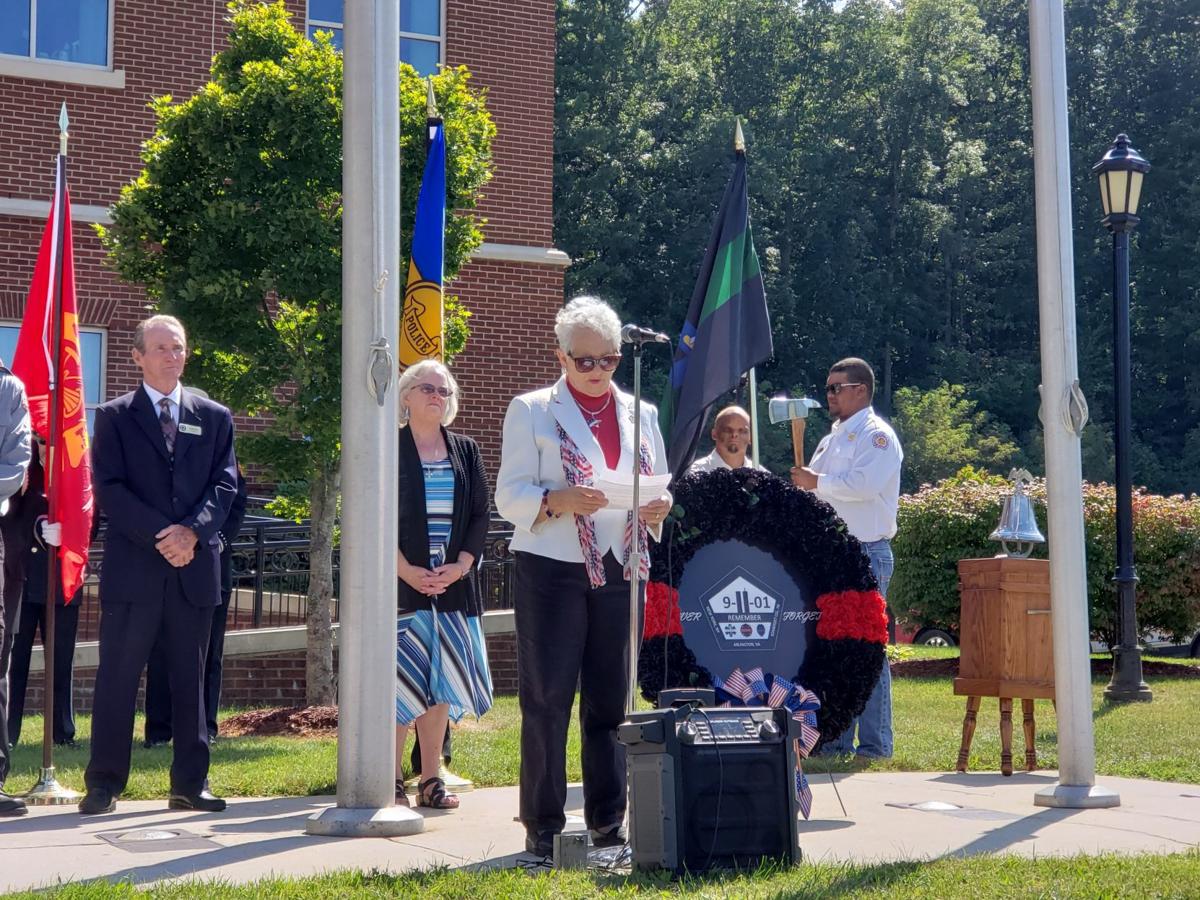 The Ashe County Honor Guard presents the colors during the 9/11 memorial service held at the Ashe County Courthouse Sunday, Sept. 8.

Sheriff B. Phil Howell reads the times of key moments on 9/11 during the service held Sunday, Sept. 8.

This story has been updated to accurately reflect Rep. Foxx's district.

JEFFERSON — Ashe County first responders and community members gathered in front of the Ashe County Courthouse to honor and remember those who made the ultimate sacrifice 18 years ago during the tragic events of Sept. 11, 2001.

The 9/11 memorial service, held on Sunday, Sept. 8, and organized by the Ashe County Fire and Rescue Association, brought together local elected officials, volunteer firefighters, the Ashe County Honor Guard and a number of other first responders for a day of remembrance.

“I think it’s very important that we do this thing every year,” said Donnie Miller, vice president of the Ashe County Fire and Rescue Association. “We need something to remind people of what actually did happen that day.”

During the ceremony, the Ashe County Honor Guard presented the colors and the Rev. Wade Huntsinger, of Warrensville Baptist Church, gave an invocation.

10:03 a.m. — Hijackers crash United Airlines Flight 93 into an empty field near Shanksville, Pa. after passengers try to seize control of the aircraft.

“An attack meant to bring us to our knees instead brought us together, and prompted a generation of protectors — airmen, coastguard, soldiers, sailors, and marines — to rise up in defense of freedom and in pursuit of peace,” Foxx said.

Foxx added that the memorial service served as a way to honor the families of the fallen in New York, Washington, and Pennsylvania, and to give thanks for the bravery of first responders who ran toward the burning buildings and away from safety.

“Communities like this are the examples to our whole country of what it means to be united as Americans, to cherish what the freedom that is uniquely ours, and honor those whose lives were lost in the 9/11 attacks on our country,” Foxx said.

Perry’s son was serving in the U.S. Navy at the time, Perry recalled. She said her son’s friend was killed at the Pentagon after Flight 77 crashed into the building. Her son had been transferred from the Pentagon a few months prior, and if he was not transferred, he would have been at the Pentagon on Sept. 11, 2001, Perry said.

“You don’t know how indirectly this has affected people,” Perry. “This is something we need to remember and honor.”

“I get very emotional when I look around and see all of them here, and then remembering that at 9/11, when all of the victims were running out of the building, these guys were running in.”

Howell noted his appreciation for the Fire and Rescue Association, as well as all of the fire departments in the county.

“We have the best fire departments,” Howell said. “We’re just very blessed to have the service members to coordinate this in remembrance of 9/11. Hopefully, nothing like that ever happens again, but we also don’t want to forget because it definitely changed the way society does things.”

Following the service, a procession of fire trucks, ambulances and law enforcement vehicles traveled through the towns of Jefferson and West Jefferson.

Miller said he was pleased with this year’s service, and the Fire and Rescue Association plans to give advanced notice for next year’s event.