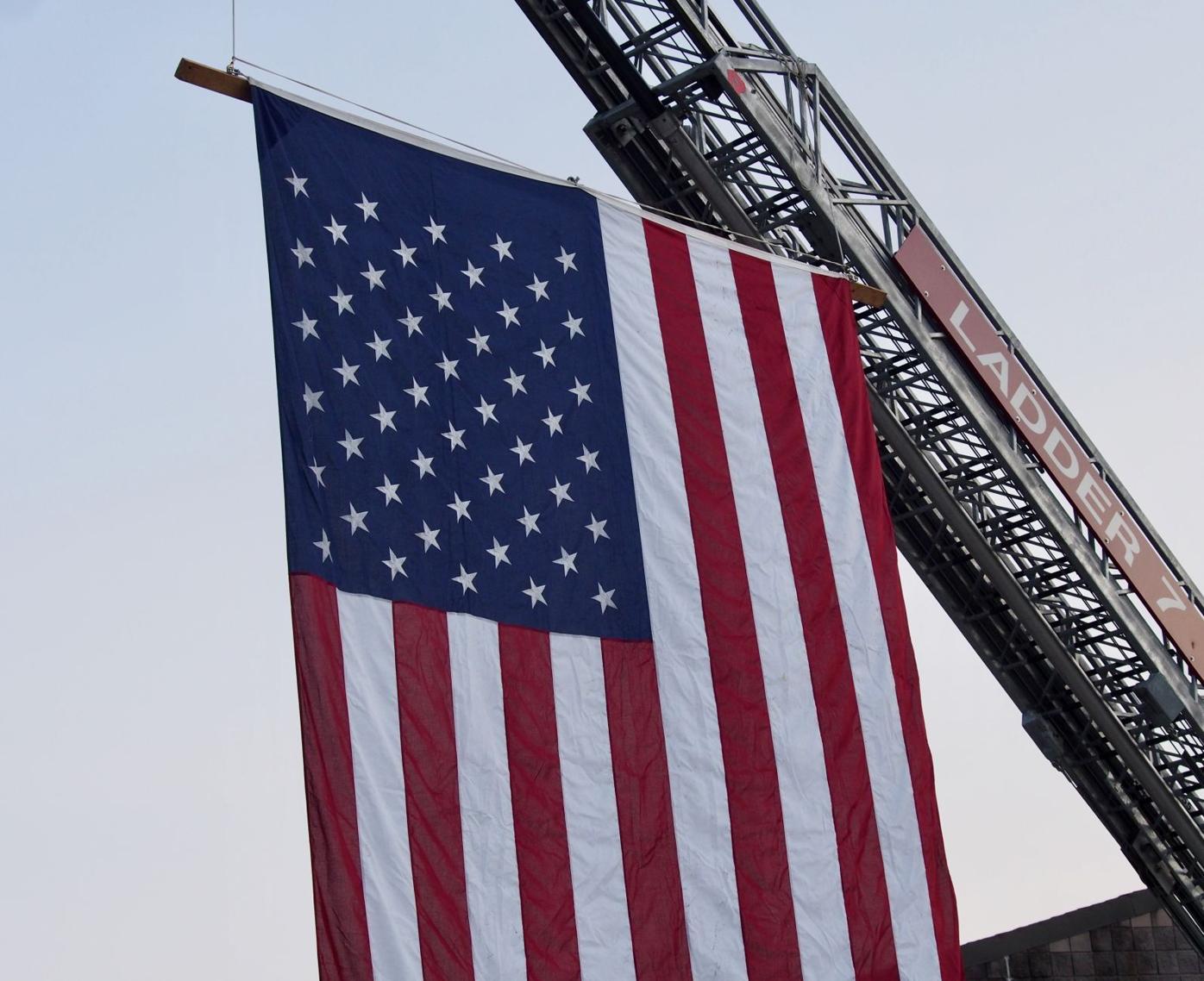 The American Flag stands tall and proud at the Civic Center on Sept. 11. 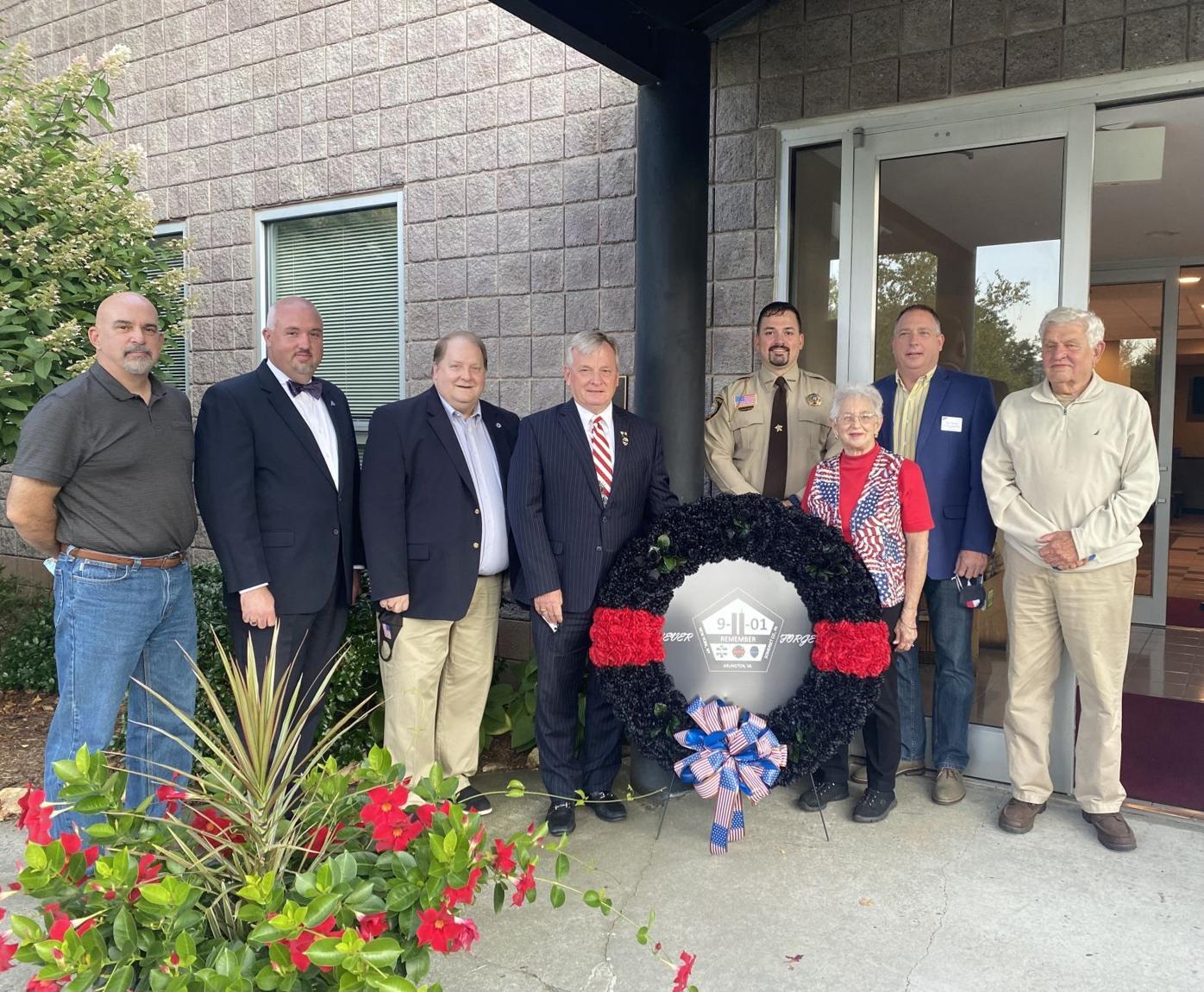 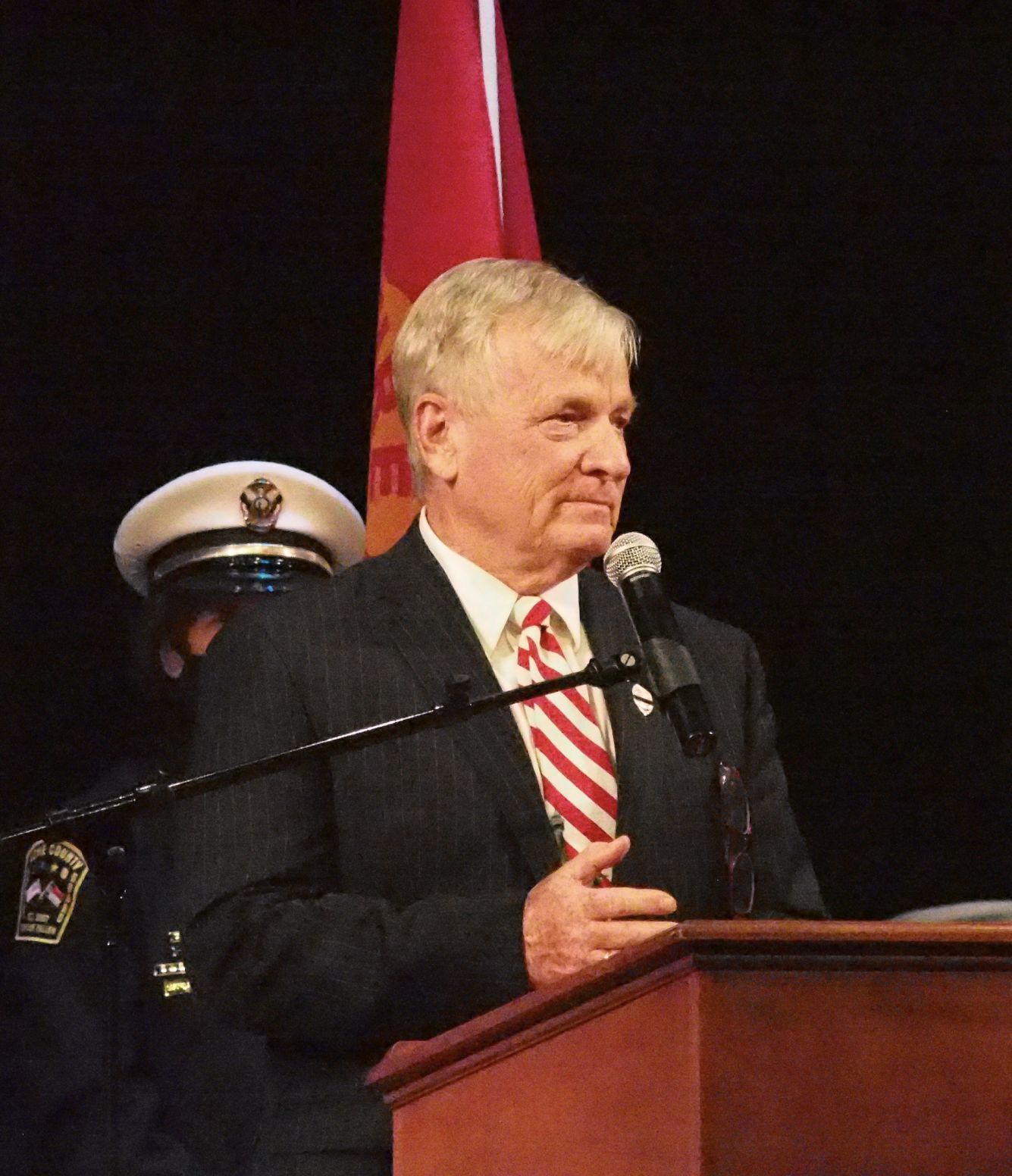 State Treasurer Dale Folwell gives his remarks on the events of 9/11 and how the country can once again be united. 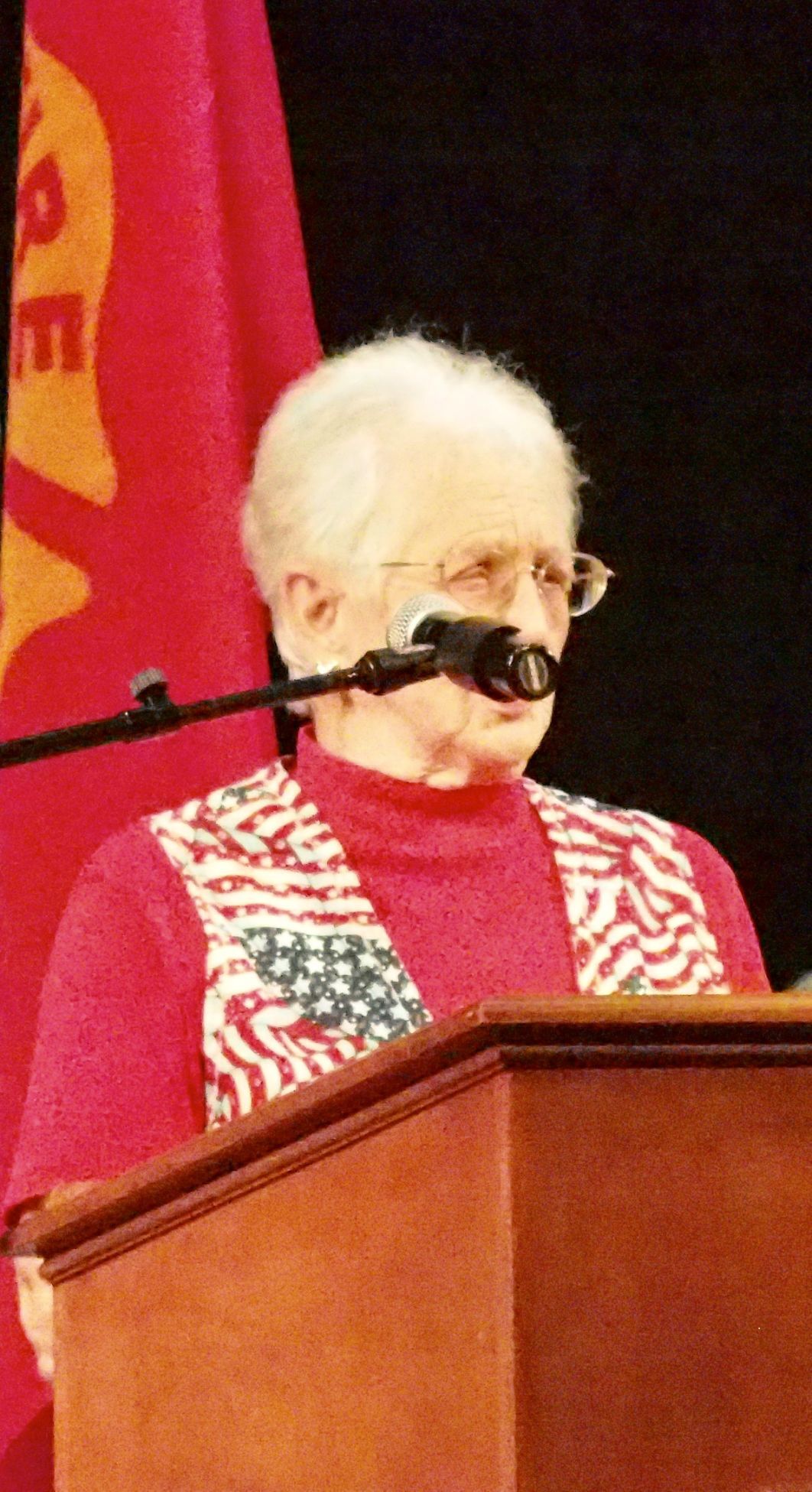 Congresswoman Virginia Fox came to the Ashe Civic Center on Sept. 11 to speak on the tragedy that occurred 20 years ago. 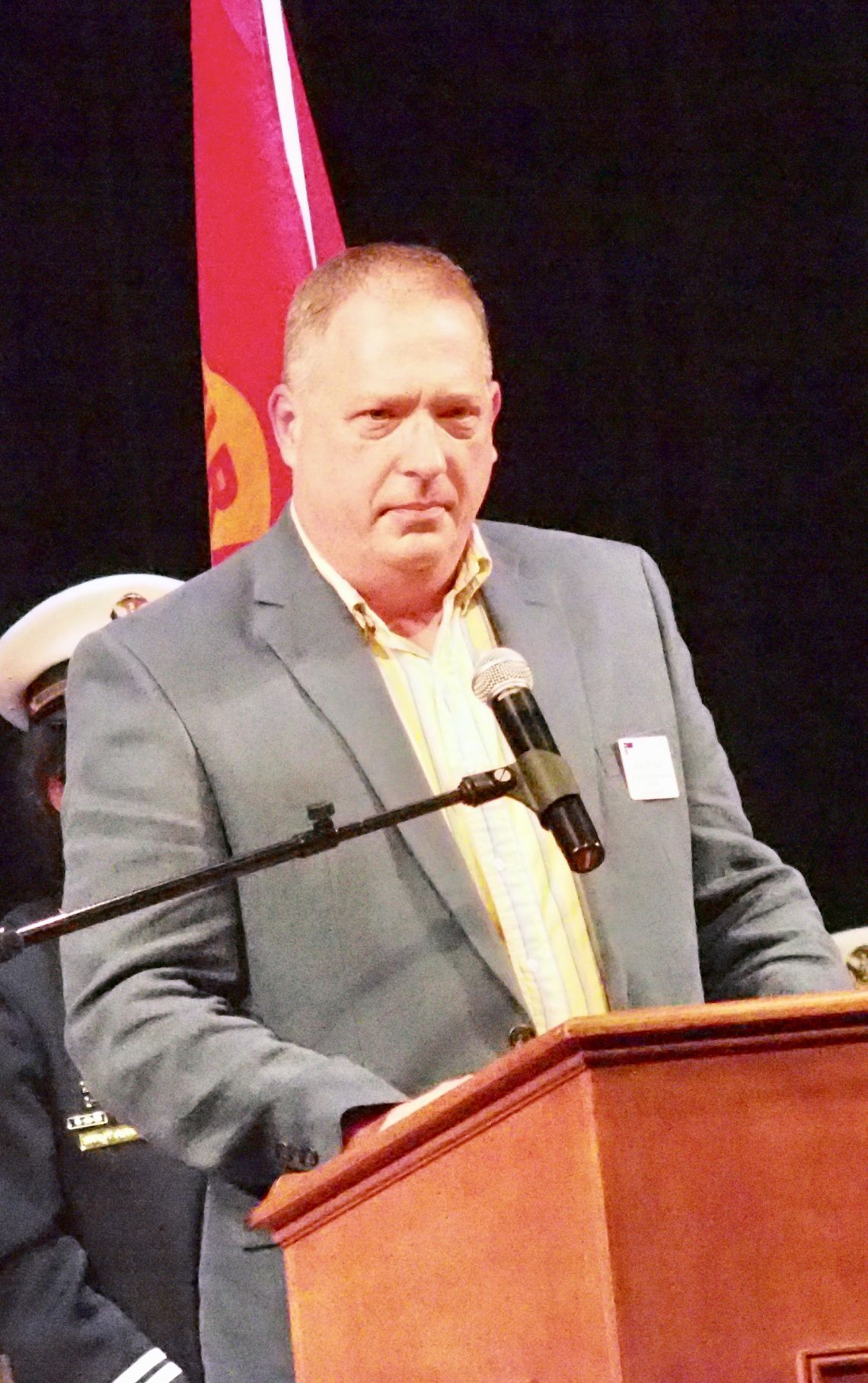 State Representative Ray Pickett took to the stage to speak on 9/11. 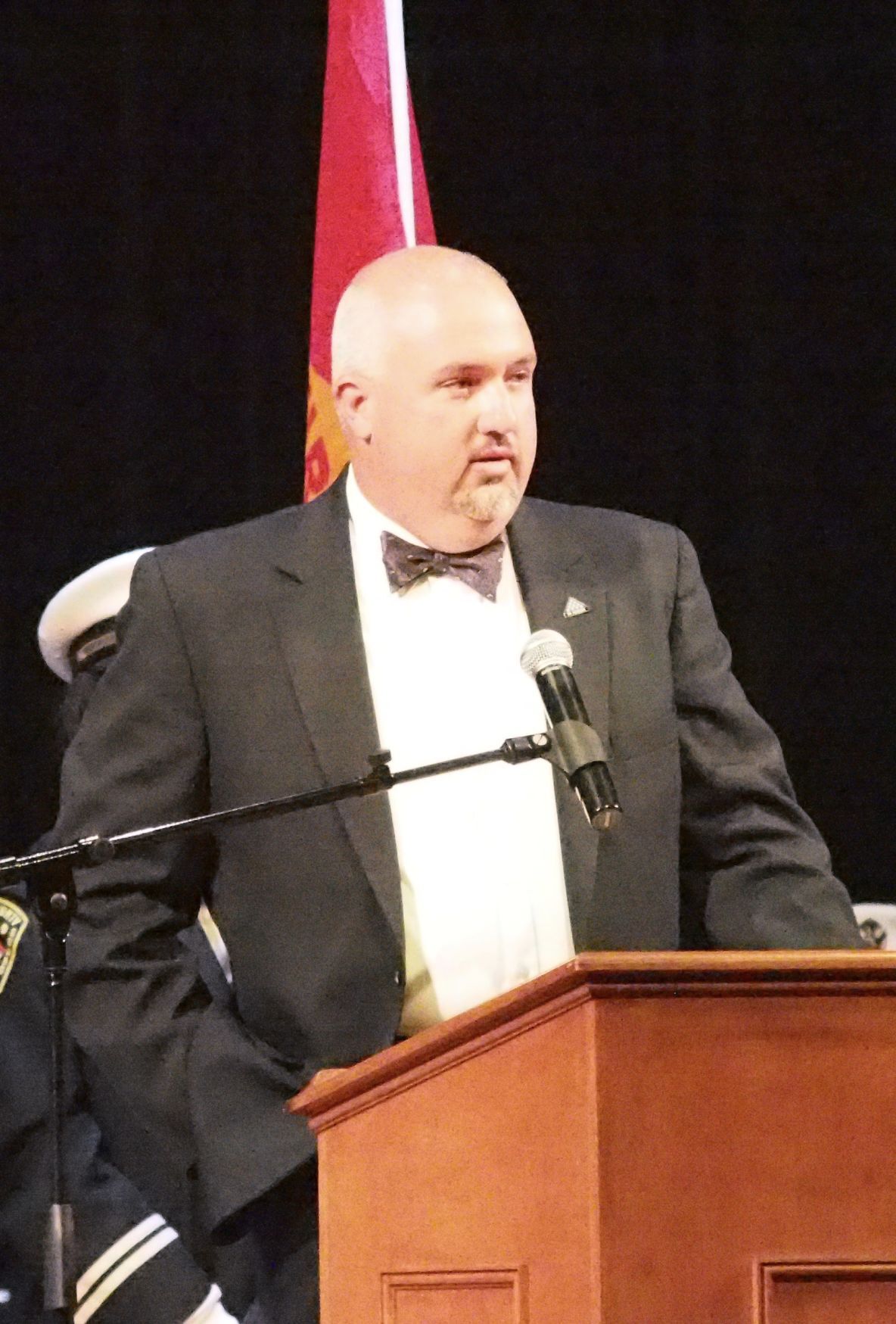 Board of Education Chair Josh Roten spoke on behalf of the school board on Sept. 11. 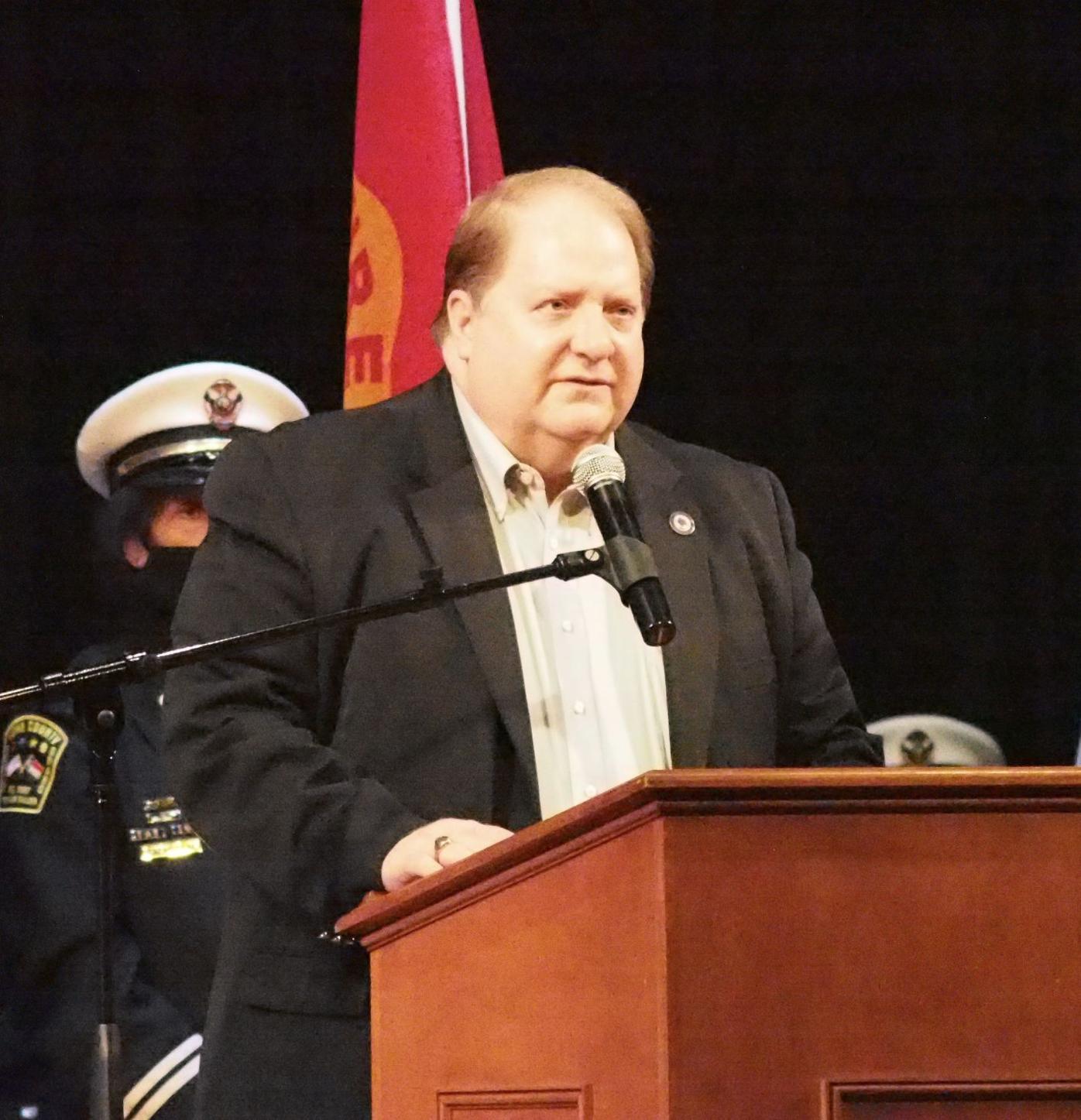 Commissioner Jonathan Jordan represented the county at the Civic Center on Sept. 11. 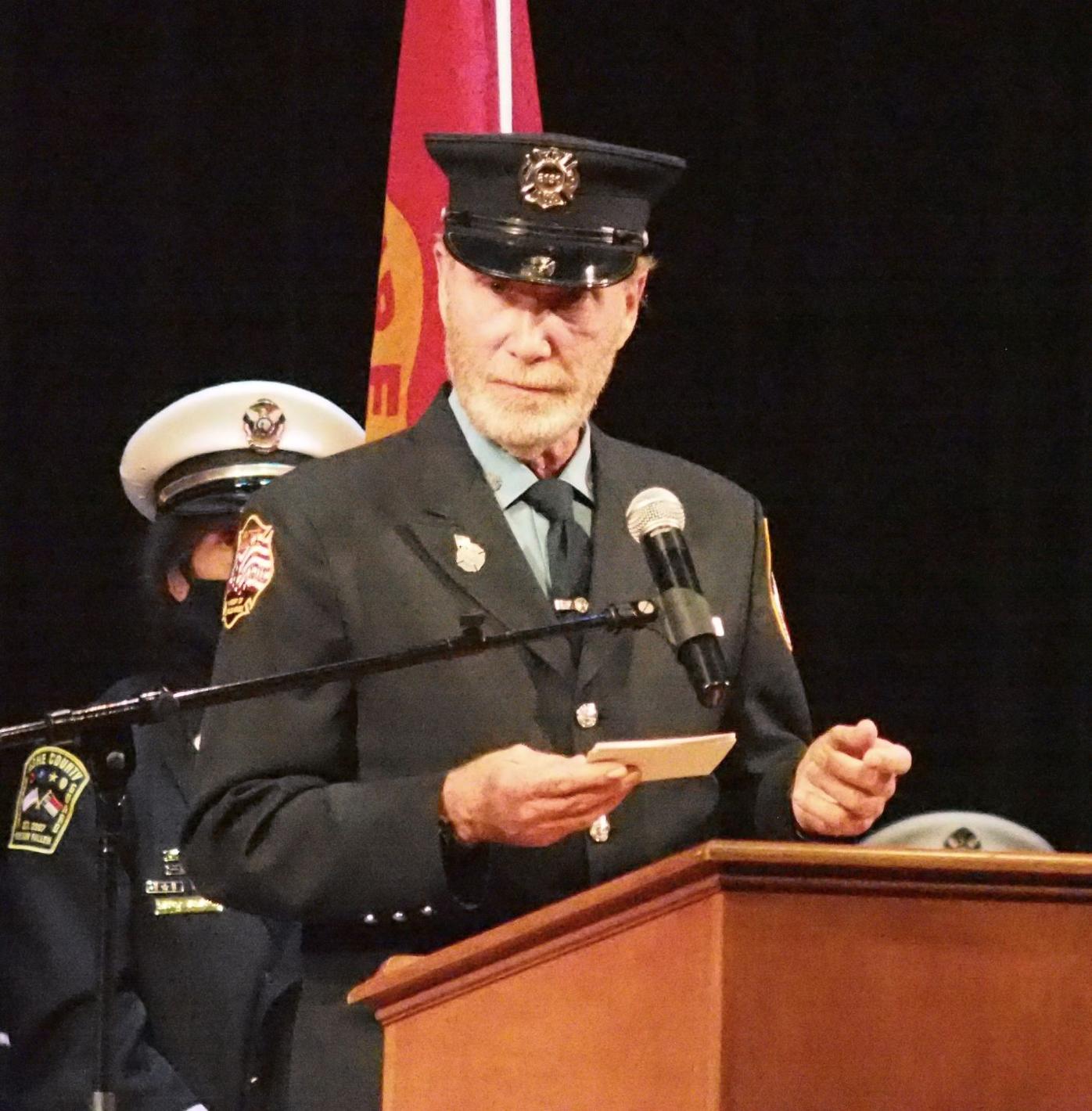 The American Flag stands tall and proud at the Civic Center on Sept. 11.

State Treasurer Dale Folwell gives his remarks on the events of 9/11 and how the country can once again be united.

Congresswoman Virginia Fox came to the Ashe Civic Center on Sept. 11 to speak on the tragedy that occurred 20 years ago.

State Representative Ray Pickett took to the stage to speak on 9/11.

Board of Education Chair Josh Roten spoke on behalf of the school board on Sept. 11.

Commissioner Jonathan Jordan represented the county at the Civic Center on Sept. 11.

WEST JEFFERSON — On Saturday, Sept. 11, Ashe County gathered in the Civic Center to pay tribute to those we lost on that day 20 years ago, and those who fought on after.

County officials, the honor guard, survivors of the attacks and others were present, each sharing words of encouragement and advice as “we continue to strive toward a better world.”

The ceremony began with a time table of 9/11, including speakers going through the events that unraveled.

NC Treasurer Dale Folwell spoke about how Ashe County will never forget the tragedy that happened in New York City.

“I have a very local connection with this area,” said Folwell. “This event that you’re witnessing and being a part of today, didn’t just jump up on the table by itself. Being a part of this and paying tribute is highly important. As your state treasurer, one of my main responsibilities is to pay attention to planning for nearly 1 million servants in North Carolina. Most of the people you see in uniform now are a part of our pension responsibilities. Those pensions come as blessings, but unfortunately, we have to deliver checks to spouses and beneficiaries who were killed in the line of duty.

“It’s important to remember that this outcome happens unfortunately too often in North Carolina. I will not only thank all of those in the audience who are first responders, police officers, medics, firefighters, EMS and volunteers, but I want to also thank their spouses. As you know, it’s sometimes the spouses who truly suffer in these public services. I thank all of you for making the choice to come here today and to thank all of those who made this possible.

“This world is a lot different than it was 20 years ago. If you imagine how this world came together 20 years ago after 9/11, you may be asking yourself, ‘if this were to happen again, would we be capable of doing that?’ We hope that nothing like this ever happens again, but I have absolutely no doubt, as divided as we are and as uncertain as we are in this world today, if this were to ever happen, this country would become united.”

Congresswoman Virginia Fox then spoke a few words about the tragedy that struck America.

“I want to thank, not only those who served actively, but their families as well,” said Fox. “I am honored to have been able to represent Ashe County for many, many years. I don’t think there are are very many places in the country where there are more patriotic people than there are in Ashe County. You know how to celebrate Holidays that should be celebrated and commemorate events that should be commemorated, so that we don’t forget what is important about our country.

“We all know where we were when we heard the news of what happened on 9/11. That attack against America was intended to bring us to our knees and in many ways it did bring us to our knees to pray to God. But, it didn’t bring us to our knees to give up. If we’re ever faced with this again, we will come together as a people. Fear did not win that day. Darkness did not win that day. Freedom, resilience and a renewed sense of patriotism and duty won that day and the days after. Twenty years later, that freedom, resilience, patriotism and duty continue to live on within our hearts and in our activities as tonight’s event shows.”

State Rep. Ray Pickett then headed to the stage to give a rally cry and an echo to his previous speakers.

“I know exactly where I was that day,” said Pickett. “I can remember the layout of the furniture and watching all of the events unfold. But like many of us, after that day, we gathered strength and we moved on.”

Pickett then recalled his opportunity to visit Ground Zero, stating that he became overwhelmed with emotion and reflected on those in his life who put on the uniform every day to protect our country.

Josh Roten, chairman of the Ashe County Board of Education made a brief on how the county has continued to unite in both times of victory and sorrow.

“I looked up the definition of a patriot and found that it is one ho loves his or her country and supports its authority and its interest,” said Roten. “In thinking about that, we have our wonderful first responders that helped on that day and those who are continuing to serve us today. Looking back 20 years ago, on those days, we lost about 3,000 people. A lot of those were our patriots. Also, that did instill a lot of folks as we see them joining our military and I work with them, our veterans and first responders. To all of the patriots we have in the audience, our first responders, our veterans and our Ashe Countians, I thank you for stopping to take time to remember the tragedy of 9/11 and remember that our nation will not bend.”

County Commissioner Jonathan Jordan then spoke on behalf of the county, remembering how we built ourselves back up after the attacks on 9/11.

“2,977 Americans died on that day,” said Jordan. “414 of them were first responders. Thats 13.8 percent. To all of you first responders, thank you so much. Thank you for what you do for us in the county, in the state and in the nation. We’re going through some hard times in our country today. Our nation and our Americans are resilient and like our previous speakers said, we will come together. We are unified. We will take on this challenge like we’ve taken on every other challenge before and we will succeed.”

To end the event, retired FDNY firefighter Bill Brenna from ladder company 47, spoke on his experiences and firsthand account with the 9/11 attacks.

“On that fateful day 20 years ago, I was off duty,” said Brenna. “My family called and said that a plane crashed into the world trade center. I watched as heavy smoke poured out of the North Tower. Then I witnessed the unimaginable: the second plane hit the South Tower. My mind could not comprehend the scene I had just witnessed. I knew that this would be a huge and unprecedented task for the FDNY. The fire department issued a total recall meaning that all 12,000 firefighters were to report to their respective fire houses. I tried to reassure my wife and twin daughters that everything would be okay. I’ll never forget their faces when I walked out the door.

“I remember the uncertainty of what to expect when I drove to Ground Zero. There was smoke and fire rising out of a 30 foot high debris pit. The clear blue sky was obscured by a thick haze of smoke and confetti like paper was just floating in the air. It was a surreal sight. We were like ants on an ant hill as we searched for survivors. We got no response as we beat around the rubble and dust. It was then that I realized that the collapse of two 110 story buildings had pulverized everything in its path. For the next six months, the FDNY spent 24 hours on and 24 hours off, manning firehouses, being detail to Ground Zero and attending funerals for our fallen brothers, sometimes two to three a day and most with empty caskets.

“I’ll remember first responders joining us in our search and rescue recovery efforts, the day President Bush threw out the first pitch at Yankee stadium. So on this 20th anniversary of the terrorist attacks on our country, let us remember the 2.977 people who perished that day. Never forget.”