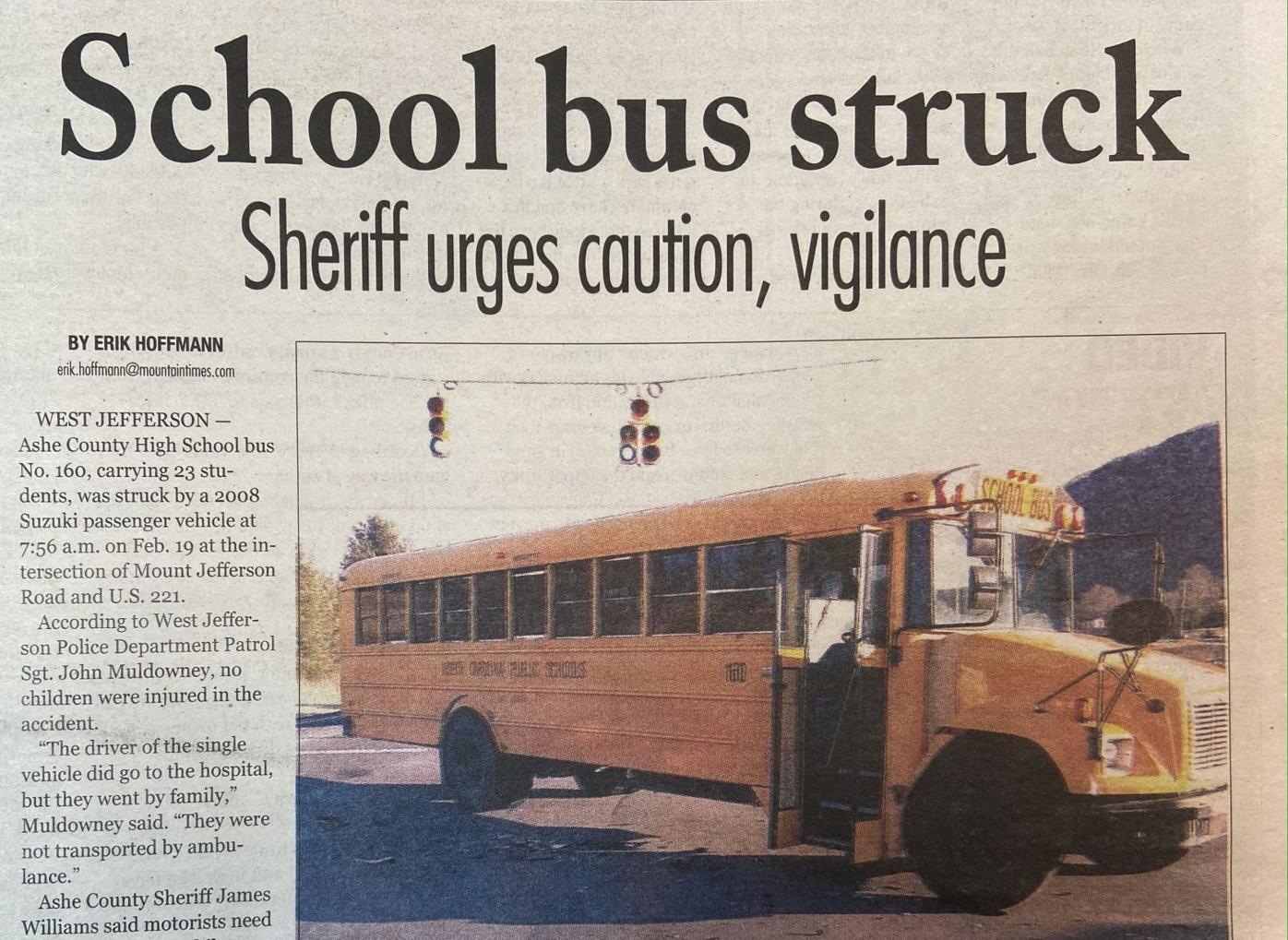 The article ran in the Feb. 25, 2016, edition of the Ashe Mountain Times written by Erik Hoffmann. 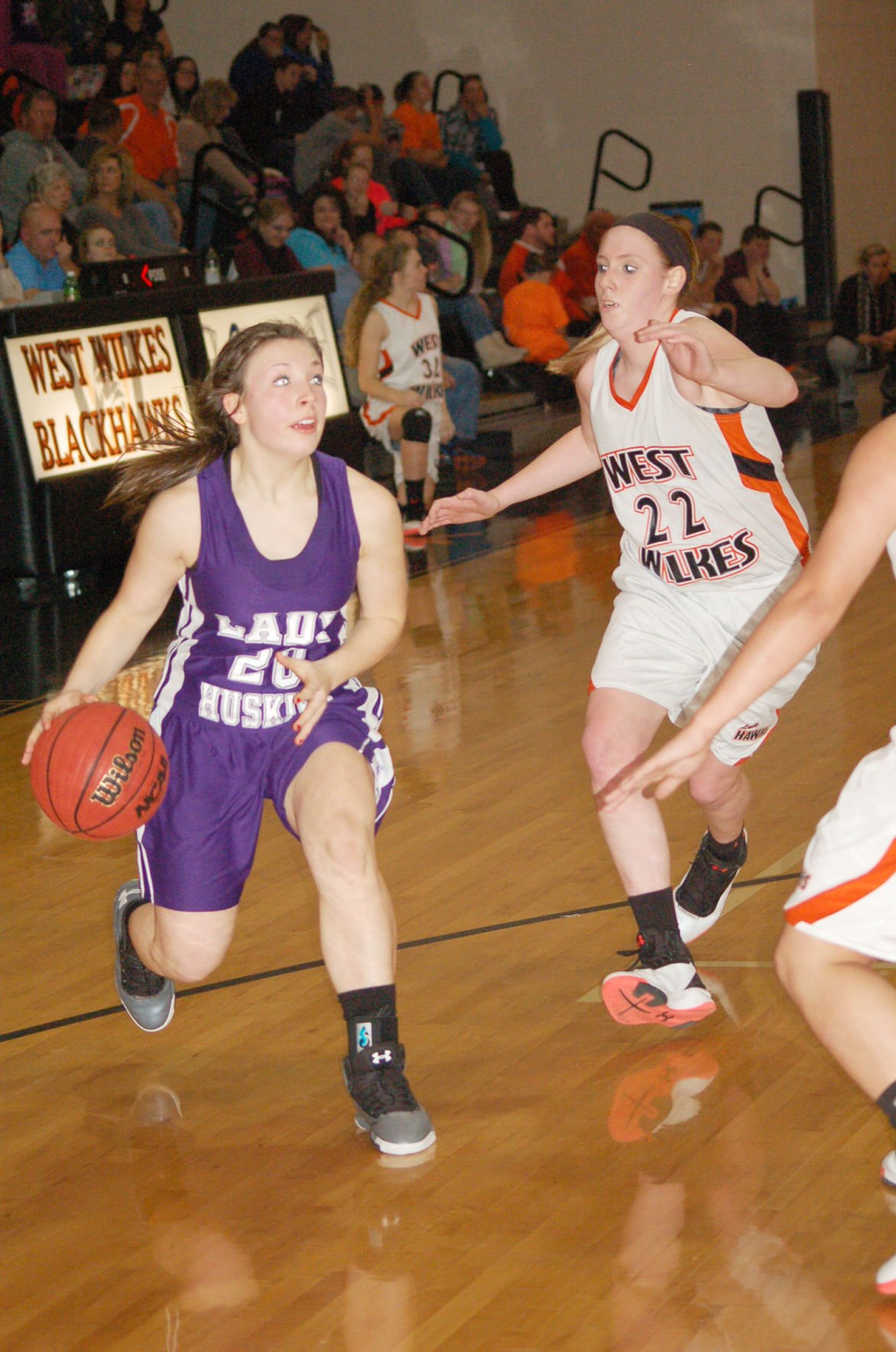 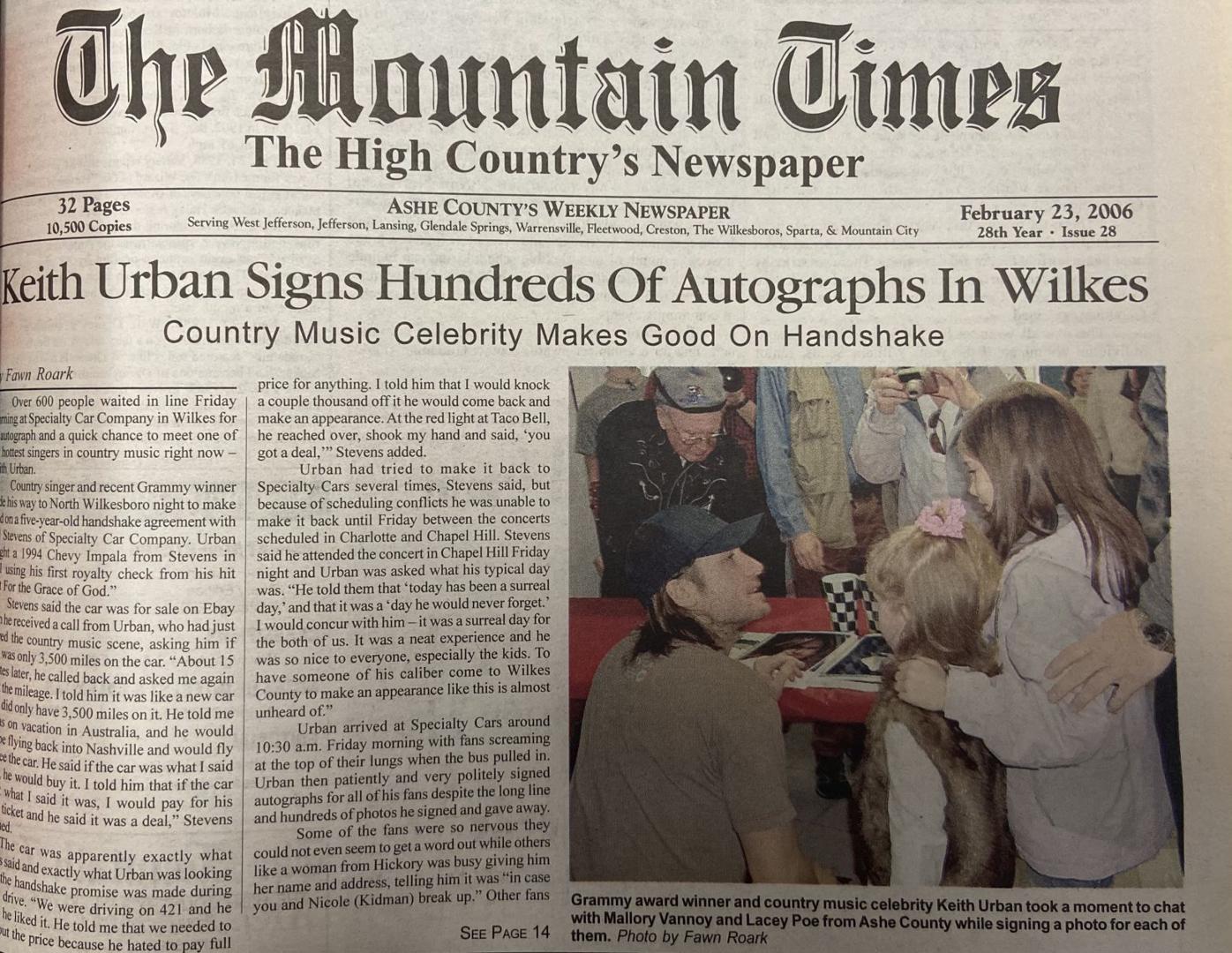 The article, written by Fawn Roark, that ran in the Feb. 23, 2006 edition of The Mountain Times is about Keith Urban signing autographs in Wilkes County. 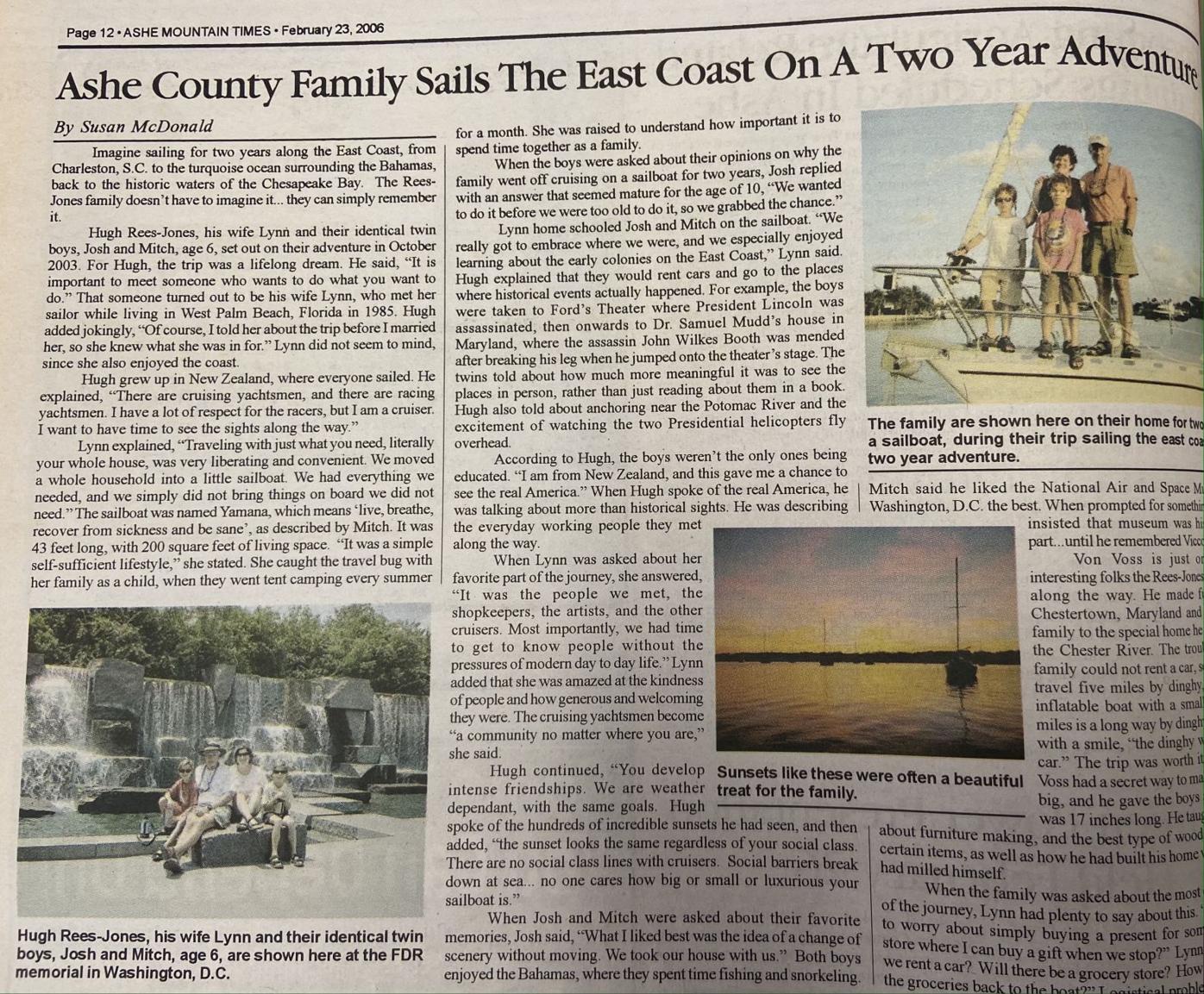 The article by Susan McDonald about the Rees-Jones family’s travels that ran in the Feb. 23, 2006 edition of The Mountain Times.

The article ran in the Feb. 25, 2016, edition of the Ashe Mountain Times written by Erik Hoffmann.

The article, written by Fawn Roark, that ran in the Feb. 23, 2006 edition of The Mountain Times is about Keith Urban signing autographs in Wilkes County.

The article by Susan McDonald about the Rees-Jones family’s travels that ran in the Feb. 23, 2006 edition of The Mountain Times.

According to West Jefferson Police Department Patrol Sgt. John Muldowney, no children were injured in the accident.

“The bus was turning to go onto Ashe County High School Drive, which is in between Mount Jefferson Road and U.S. Highway 221,” Muldowney said. “A vehicle entered the intersection, had a steady red light, to our understanding, and the school bus was making a left-hand turn and the vehicle struck the school bus.”

Both vehicles had substantial damage as a result of the crash.

The North Carolina Department of Health and Human Services on Feb. 19 announced the first case of Zika virus infection in a North Carolina resident. The case was confirmed in an adult who recently had traveled to a country with ongoing Zika virus transmission.

As of Feb. 18, the Centers for Disease Control and Prevention reported travel-related Zika virus infection in 21 other states, the District of Columbia, Puerto Rico and the U.S. Virgin Islands.

Woods leads Huskies into 2-A tournament

Generally speaking, the leading scorer of a prep girls’ basketball team is not a freshman.

Then again, when there is only one senior on the roster, that possibility has a better chance of becoming reality. It happened this season at Ashe County when Sam Woods led the Huskies in scoring in just her first year playing prep basketball.

Woods led the Huskies in scoring by averaging 12.5 points per game. She turned out to be the only Ashe player to average in double figures, and leads the Huskies into the state 2-A playoffs where they will take on Mountain Valley Conference rival North Wilkes on Feb. 23.

Over 600 people waited in line Friday morning at Specialty Car Company in Wilkes for an autograph and a quick chance to meet one of the hottest singers in country music right now — Keith Urban.

Country singer and recent Grammy winner made his way to North Wilkesboro night to make good on a five-year-old handshake agreement with Phil Stevens of Specialty Car Company. Urban bought a 1994 Chevy Impala from Stevens in 2001 using his first royalty check from his hit “But For the Grace of God.”

Urban had tried to make it back to Specialty Cars several times, Stevens said, but because of scheduling conflicts he was unable to make it back until Friday between the concerts scheduled in Charlotte and Chapel Hill. Stevens said he attended the concert in Chapel Hill Friday night and Urban was asked what his typical day was. “He told them that ‘today has been a surreal day’, and that it was a ‘day he would never forget.’ I would concur with him — it was surreal day for the both go us. It was a neat experience and he was so nice to everyone, especially the kids. To have someone of his caliber come to Wilkes County to make an appearance like this is almost unheard of.”

Imagine sailing for two years along the East Coast, from Charleston, S.C., to the turquoise ocean surrounding the Bahamas, back to the historic waters of the Chesapeake Bay. The Rees-Jones family doesn’t have to imagine it ... they can simply remember it.

Hugh Rees-Jones, his wife, Lynn, and their identical twin boys, Josh and Mitch, age 6, set out on their adventure in October 2003. For Hugh, the trip was a lifelong dream. He said, “It is important to meet someone who wants to do what you want to do.” That someone turned out to be his wife, Lynn, who met her sailor while living in West Palm Beach, Fla., in 1985. Hugh added jokingly, “Of course, I told her about the trip before I married her, so she knew what she was in for.” Lynn did not seem to mind, since she also enjoyed the coast.

The trip ended in Charleston, S.C., in December 2005. The family then moved to Ashe County, which they describe as a fluke. A friend from Charleston had discovered Boone, and invited them to come up. They fell in love with the mountains, started looking for a place to live, and found a place to settle down right here in the county.

Mitch and Josh have each written a book about the trip. The family has only been here for a couple of months, but the energetic boys have already built a nature trail up on the hill behind their house.