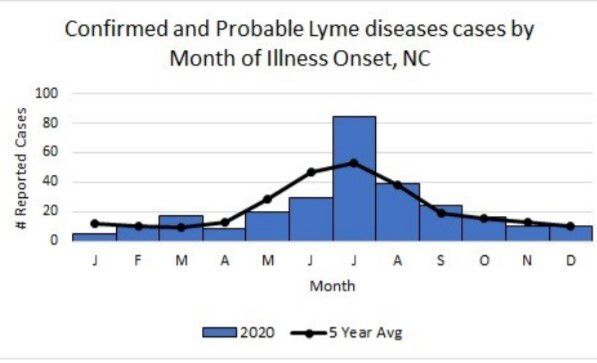 The summer months exhibit peak tick activity. According to the NCDHHS’s Lyme Disease Surveillance Summary from 2015 to 2020, July 2020 featured an above average spike of Lyme disease confirmed or probable cases. 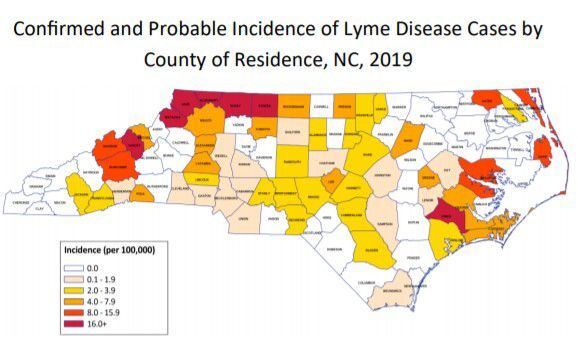 The most severe spread of ticks in North Carolina is concentrated in the High Country according to a 2019 NCDHHS survey. The ticks, according to App State’s Dr. Steve Seagle, are moving down the Blue Ridge. 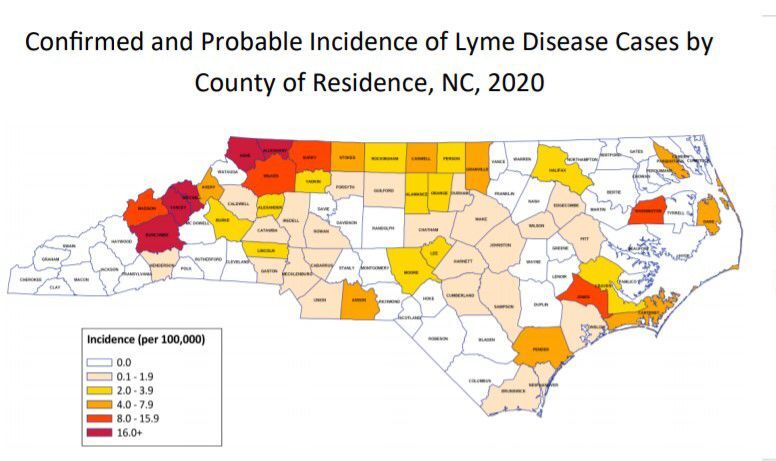 Compared to the 2019 survey of Lyme disease from the NCDHHS, the 2020 data shows a spread of ticks expanding from the northwest corner of the state.

The summer months exhibit peak tick activity. According to the NCDHHS’s Lyme Disease Surveillance Summary from 2015 to 2020, July 2020 featured an above average spike of Lyme disease confirmed or probable cases.

The most severe spread of ticks in North Carolina is concentrated in the High Country according to a 2019 NCDHHS survey. The ticks, according to App State’s Dr. Steve Seagle, are moving down the Blue Ridge.

Compared to the 2019 survey of Lyme disease from the NCDHHS, the 2020 data shows a spread of ticks expanding from the northwest corner of the state.

HIGH COUNTRY — When Brad Paisley sang “I’d like to check you for ticks” in 2007, he could not have predicted the dramatic increase in tick populations throughout the High Country in the late 2010s.

In the last half-decade, tick populations, as well as the occurrences of the diseases they carry, have been on the rise throughout the High Country. While many Southerners think ticks have always been a part of life, population surveys suggest ticks are far more prevalent in the region now than they were even five years ago.

Dr. Steve Seagle, a landscape ecologist at Appalachian State University, can be seen in the summer months dragging swatches of corduroy across the surface of a field or forest floor. The one meter-by-one meter length of material is a standard beige, but when he flips it over, should he find what he is looking for, it is speckled with brown and black ticks.

“We could see the ticks coming,” Seagle said.

When he started looking for ticks in the High Country around 2015, he said he thought he was “just incompetent” because he couldn’t find any. However, once he ventured further up the Blue Ridge toward Virginia at Clear Lake State Park, where a student at Virginia Tech has identified the largest, most southern cluster of ticks, he found plenty.

Even within the High Country region, the spread of ticks features distinct boundaries that are constantly moving. According to the NC Department of Health and Human Services, in 2019 ticks and Lyme disease were in their most severe categorization of 16.0-plus cases of Lyme disease per 100,000 people, in Ashe and Watauga counties. In the 2020 report, Watauga had zero cases per 100,000, although this could be due to no data being reported.

Just across county lines, ticks were virtually unseen in Avery County in 2019. However, in 2020 the NCDHHS survey demonstrated a spread of ticks trickling into the county which placed Avery County in the 4.0 to 7.9 cases per 100,000 people category.

According to Mason Gardner, environmental health program specialist for the Toe River Health District, Avery County has only had one case of Lyme disease in the county in 2021.

“We’re just now starting to understand where the front of this spread is,” Seagle said. “It just went wild down the Blue Ridge,” he said, and that with the change in distribution the risk of Lyme disease has increased.

Lyme disease, which is caused by infection from the bacteria Borrelia burgdorferi, can cause flu-like symptoms in the short term, but left untreated, can spread to the joints, heart, and nervous system, according to the NCDHHS. The black-legged tick, or “deer tick” as many know it, is the only tick in this region that infects humans and animals with Lyme disease. There are other types of ticks in the region, but none that carry Lyme disease like the black-legged tick.

Luckily, researchers have an increasingly clear picture of how common Lyme disease is. Ticks pick up Lyme disease from the white-footed mouse once they feed on its blood. Seagle said that in his recent studies, at one site he found a Lyme disease infection rate of 18 to 21 percent of ticks, meaning less than a quarter had Lyme disease. Seagle said this is not an unusual percentage.

The summer months, as many would expect, are the peak activity time for young ticks, called nymphs, Seagle said. Most people don’t realize, though, that adult ticks are active all through the winter.

Even in January, if it gets up to around 55 degrees, Seagle said he has found ticks.

Seagle said that, unfortunately, pets such as dogs and cats are also susceptible to Lyme disease. He said that pet owners should treat their animals year round and when going outside, community members should continue to check themselves for ticks no matter the season.

Ticks only eat, or have a “blood-meal,” two to three times in their life, Seagle said. Female ticks feed three times while males only feed once. When they are waiting for a blood-meal, which is called questing, they crawl up blades of grass, leaf litter or other vegetation and wait to attach to their host. The rest of their lives, which average two years long, ticks hide in the leaf litter on forest floors or down in the grass just trying to not desiccate and die, Seagle said.

Prevention, Seagle said, is key to avoiding Lyme disease, since it can actually take multiple hours after burrowing into skin for a tick to infect a person with Lyme disease. While ticks bites are infamous for their bullseye shaped, inflamed marking, Seagle said that not all tick bites present this way. Conducting a thorough head-to-toe check for ticks after going outside is the best way to account for any unwanted passengers.

To learn more about tick prevention, Lyme disease and more, click to https://www.cdc.gov/ticks/.

To look at the NCDHHS’s Lyme disease surveillance studies, click to https://epi.dph.ncdhhs.gov/cd/diseases/lyme.html.