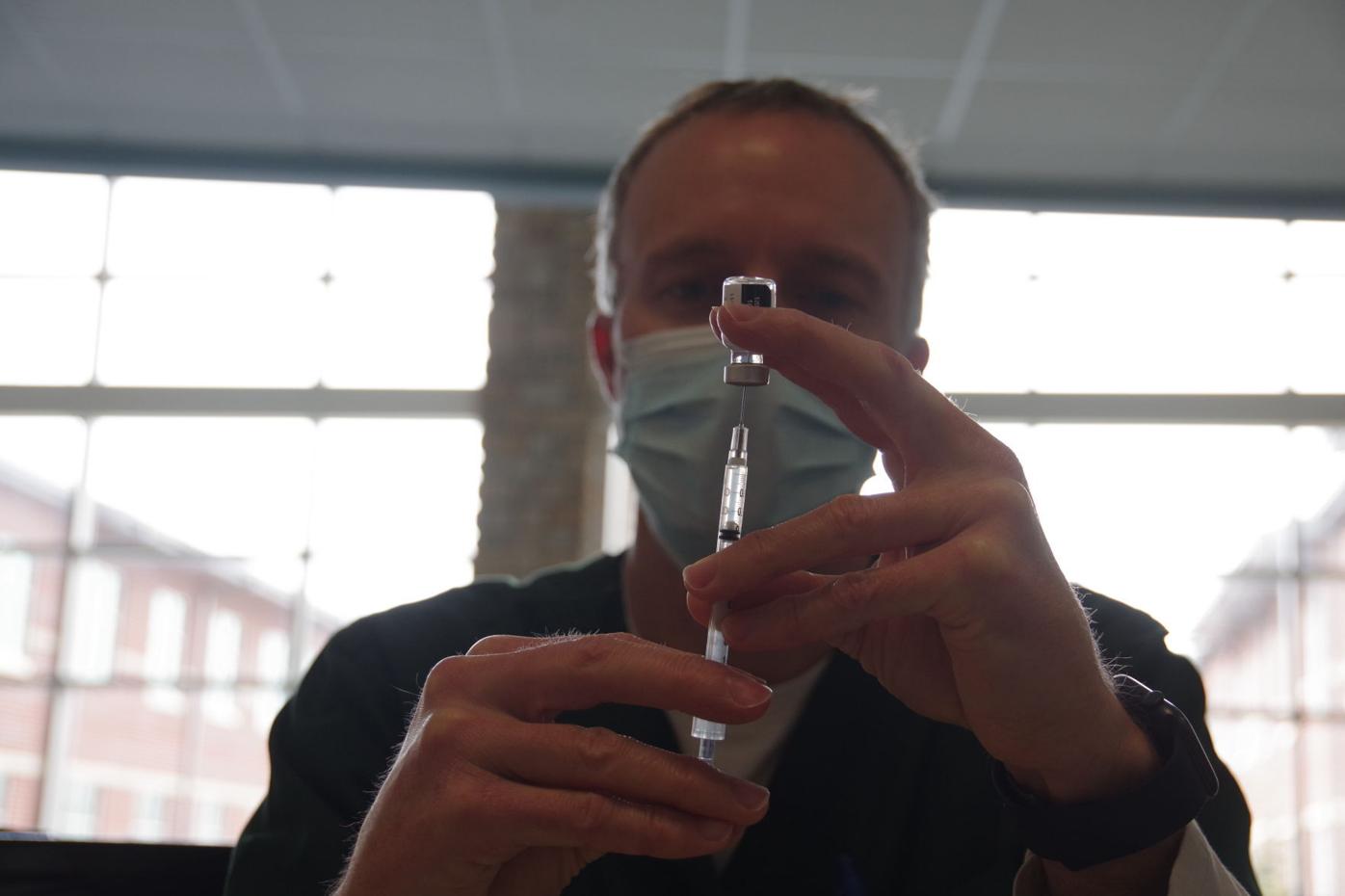 Sean Burroughs, director of pharmacy at ARHS, fills a syringe with the COVID-19 vaccine on Jan. 16 at a mass vaccination event at Watauga High School.

Sean Burroughs, director of pharmacy at ARHS, fills a syringe with the COVID-19 vaccine on Jan. 16 at a mass vaccination event at Watauga High School.

AppHealthCare spokesperson Melissa Bracey said the department has had to reschedule some appointments due to the limited number of vaccines,

“We are working very hard to get vaccine out to the community as quickly and efficiently as possible but with small amounts of vaccine, we are limited to the number we can vaccinate week to week,” Jennifer Greene, AppHealthCare health director, said in a statement. “We did not want to have to reschedule appointments, and we apologize for the inconvenience this causes for those who were looking forward to their appointment.”

Hudspeth said they share vaccines back and forth with agencies they partner with including AppHealthCare and the Toe River Health Department in Avery County.

“We are very thankful to our local hospitals — Alleghany Health, Ashe Memorial Hospital and Appalachian Regional Healthcare System — who have been willing to give us some of their vaccine supply to cover some of our appointments,” Bracey said in a statement.

For the next three weeks, as of Jan. 28, ARHS will receive 200 doses of the vaccine per week — fewer than the typical 400-800 allotments Hudspeth said the agency typically gets.

“We take pride in getting vaccines into arms and we’re just not getting the vaccines that we need,” Hudspeth said.

North Carolina was originally set to receive only 120,000 doses of vaccines the week of Jan. 27 which is about 140,000 fewer doses than the state got last week, according to North Carolina Department of Health and Human Services Secretary Mandy Cohen.

At a Jan. 27 press conference, Gov. Roy Cooper said the federal government would be upping the amount of vaccines given to states by about 16 percent.

“We’re going to go from 120,000 doses to 140,000 doses,” Cooper said. “So the staff will make decisions about giving the providers a little bit more. And they’re working through those numbers right now so that they can let providers know.”

Part of the reason some providers — like AppHealthCare — are not getting vaccines this week is because many vaccines were allotted to large vaccination events planned several weeks ago when the state was addressing the backlog in vaccinations.

“Starting with this week’s allocation, North Carolina will reserve 84,000 doses of our weekly 120,000 allocation of first doses from the federal government for our local vaccine providers,” Cohen said at a Jan. 26 press conference. “Providers will be given a baseline amount of first doses that they can expect for the next three weeks.”

Cohen also said the vaccines would be distributed to counties based on population. According to the North Carolina Office of State Budget and Management, Watauga County is the 52nd most populous county with 57,069 people as of July 1, 2019.

Residents aged 65 and older, along with healthcare workers, were vaccinated by appointment with the 500 vaccines that were provided to AppHealthCare by the state.

“We are very appreciative to all of the staff, volunteers and partners who made this event successful,” Bracey said about the event. “We were able to administer 500 doses of vaccine.The individuals who were vaccinated at this event will be invited back to get their second dose at another mass vaccination event on Saturday, Feb. 20.”

According to Bracey, AppHealthCare will reach out to these individuals directly to schedule their second dose appointment.

In a statement provided by Bracey on Jan. 29, she said AppHealthCare was notified that would receive 200 first doses of vaccine for Ashe County each week through the week of Feb. 15. Bracey added that they expect to receive 100 second doses for Ashe as well during this time.

“While we will still have a close timeline to empty our vaccine supplies, we are working in partnership with other organizations also administering vaccines to make sure we can move the vaccine supplies efficiently as a community,” Bracey said.

According to Bracey, AppHealthCare staff is working diligently to input all the needed vaccine administration information into CVMS (COVID-19 Vaccine Management System) and keep it up to date with the number of vaccines it administers.

Since NC DHHS uses this information to track vaccine distribution, it is a top priority to make sure we enter all data in a timely manner,” Bracey said in a statement.

Bracey added that they are committed to do all that they can to ensure this happens. AppHealthCare has ramped up its capacity for data entry and has about 10 to 15 staff and volunteers at any given time working on data entry, and are requesting additional surge staff who can assist as vaccine supplies increase.

The regional health department has also developed a process to ensure it is done as efficiently as possible, knowing the NC DHHS reports improvements planned for the system frequently.

“At this point, our CVMS entry very closely matches what we have been able to administer, and we are hopeful we can continue in this direction,” Bracey said in a statement. “We understand that timely entry into CVMS is one factor that can affect our future vaccine allocation. However, the largest impact is that we just do not have supplies to meet demand for vaccine at this time. While we would like to have more vaccine for our community, we know we are not the only ones who have received smaller quantities and most vaccine providers would like more vaccine than they are receiving. We are hopeful vaccine supplies will increase throughout 2021 so we can get more people vaccinated.”

Problems With The DatabaseThe goal is for providers to exhaust all first dose vaccines before the next shipment arrives. If the state exhausts the majority of its first dose of vaccines, Cohen said the state is “in a strong position to advocate to the federal government for more vaccines as they become available.”

Hudpseth said as of Jan. 22, ARHS has a 90 percent utilization rate.

“We’ll actually reach 117 percent utilization by the end of the week by using the remainder of our current supply and because we’ve already scheduled additional clinics for vaccines that we don’t currently have yet,” Hudspeth said.

Pickett said the vaccination strategy in the state is completely unacceptable.

“I’ve received numerous calls from constituents who were concerned over redistribution of doses to the mass vaccination sites,” Pickett said in a statement. “Reducing the amount of vaccines at the rural level and prioritizing cities is unacceptable and is alienating many at risk citizens. NCDHHS leaders have promised to adjust their vaccine distribution strategy to be more equitable to rural communities and my office is here to make sure they follow through on that promise.”

Foxx released a statement saying she has been speaking to county health officials, constituents, and members of Operation Warp Speed regarding North Carolina’s progress on vaccine distribution for weeks.

“I’ve been present within countless conversations, and I’m troubled by the Cooper Administration’s previous actions,” Foxx said in a statement. “If Governor Cooper and his health advisors are to lead the state in vaccination efforts, their volatile strategy of distribution can’t be prolonged any further. Hardworking citizens in Western North Carolina fear being left behind by their own government, and they’re beyond outraged at the efforts to date to protect them.”

Hudspeth said problems with the vaccine rollout really rest in the hands of the federal government.

“North Carolina has a plan,” Hudspeth said. “Has it gone perfectly? I would say no, but it is well thought out. There are certainly kinks in it, we’re all learning through this process. We just need the federal government to help the manufacturers. Determine how they can supply this country with more vaccines.”

AppHealthCare provides cumulative total counts of vaccine doses administered on their website each week on Friday. This information can be accessed by visiting the website at www.apphealthcare.com, clicking on the “COVID-19” tab and selecting “COVID-19 Vaccinations” from the drop-down menu.