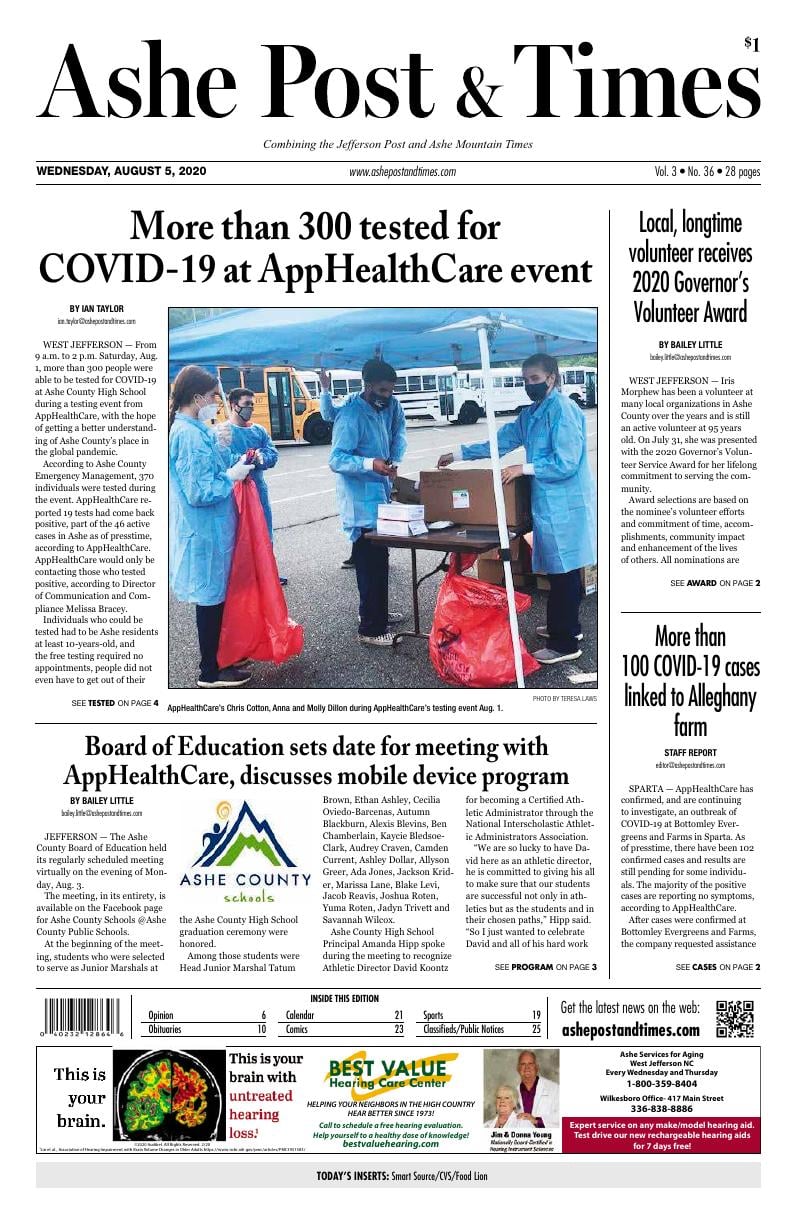 With 370 people tested, a long line of cars was constant at the event.

A sign at the entrance of Ashe County High School let people know of the testing event Aug. 1.

The Ashe County Sheriff’s Office was on-hand to ensure everything went smoothly and to help the event go well.

WEST JEFFERSON — From 9 a.m. to 2 p.m. Saturday, Aug. 1, more than 300 people were able to be tested for COVID-19 at Ashe County High School during a testing event from AppHealthCare, with the hope of getting a better understanding of Ashe County’s place in the global pandemic.

Individuals who could be tested had to be Ashe residents at least 10-years-old, and the free testing required no appointments, people did not even have to get out of their cars.

“From an Emergency Management perspective, the testing was important because it provided an opportunity for people who wanted one but don’t have insurance and can’t afford one to be tested,” ACEM Coordinator Patty Gambill said. “It also provides an opportunity to identify people who have it that may be asymptomatic and are spreading the virus without realizing it.”

“We are very pleased with how the event turned out and it was successful because of strong community partnerships with Ashe County, Ashe County Schools, Ashe Emergency Management and the Ashe County Sheriff’s Office. We appreciate each person who came out to be tested and the supportive community of Ashe County,” AppHealthCare Health Director Jennifer Greene said. “We will continue to evaluate the need for additional testing events like this one as a tool to protect the public’s health and address COVID-19 in our community. We continue to urge everyone to practice the 3 W’s anytime they leave their home and will be around others – wear a cloth face covering, wash your hands or use hand sanitizer and wait at least 6 feet from others. When we all take these actions every time, it will help slow the spread of COVID-19 in our community.”

For more information on COVID-19 in the High Country, go to www.apphealthcare.com.

JEFFERSON — The Ashe County Board of Education held its regularly scheduled meeting virtually on the evening of Monday, Aug. 3.

The meeting, in its entirety, is available on the Facebook page for Ashe County Schools @Ashe County Public Schools.

At the beginning of the meeting, students who were selected to serve as Junior Marshals at the Ashe County High School graduation ceremony were honored.

“We are so lucky to have David here as an athletic director, he is committed to giving his all to make sure that our students are successful not only in athletics but as the students and in their chosen paths,” Hipp said. “So I just wanted to celebrate David and all of his hard work tonight.”

According to Hipp, only a small percentage of about 1,200 athletic directors in all 50 states have earned this certification.

Koontz who was also present during the meeting thanked the board for the recognition of his accomplishment.

“You can’t grow without learning and so I’m continuing to learn as I progress,” Koontz said. “I think I’ve gained a lot of valuable knowledge as we try to serve our students and our student athletes.”

Director of Exceptional Children and Pre-K, Terry Richardson spoke about the general contract between the North Carolina Department of Health and Human Services and Ashe County Schools for Pre-K.

Richardson said the funding this year is the same as last year’s, which is based on population. She said they have been at 133 students for the past decade.

Little said these programs were held completely virtually from July 20-31. They provided devices for those who were in need of them, as well as paper and pencil options for those without internet access.

According to Little, they had about 120 participants and she loved that they were able to offer the program to K-4 students and also focus on mathematics more than they typically do.

One of the major initiatives is to support virtual and remote learning. According to Walker, the school system will need several items in place including hardware. With board consent, Walker said ACS would like to deploy a chrome device to each student enrolled in grades 3-12. This will be called the Ashe County Schools Mobile Device Program, which was formed in response to feedback from both parents and teachers.

Walker added that those who attend school for face-to-face instruction would be expected to bring their device to school every day.

Walker also spoke about the survey results concerning wifi connectivity in their households. There were 1,180 responses in total and Walker noted that the data may be skewed since families who do not have internet service most likely could not complete the survey.

The school system has been working to set up hotspots located throughout the county for families to utilize in order to secure internet access. These hotspots include community fire departments, community churches and businesses and they are planning to install wi-fi antennas in school buses.

Walker said that they anticipate any additional costs for repairs will be offset by the technology fee.

The BOE voted unanimously to move forward with the one-to-one deployment of the devices they currently have onhand to students for this school year.

Eldreth expressed her concern about the safety of students, teachers and school staff voicing that cases continue to rise rapidly in Ashe County.

Chairman C.B. Jones said that he feels they will monitor the numbers closely and if cases continue to rise they will have no other choice but to switch to Plan C.

In response, Eldreth said there needs to be preparation for teachers to make the transition to teaching completely online.

Superintendent Dr. Eisa Cox said that she feels the school system will be prepared to make the shift to Plan C if necessary.

After discussion about concerns from each board member, Cox entertained the notion of getting some input and updates on case numbers from AppHealthCare. She also said they could modify Plan B if they feel the need to do so.

After discussion, it was decided that they would make the decision about whether or not to begin the school year on Aug. 17 under Plan B or C after meeting with Greene.

The board decided to meet with Greene in an open session to learn more about the COVID-19 testing results for the county on Thursday, Aug. 6 at 5 p.m. at the Central Support Services Annex.

It was decided prior to adjournment that this meeting will be available via live-stream for community members to be able to listen in on the discussion. Budget work sessions are planned for Aug. 24-25. These sessions will begin on Aug. 24 at 5 p.m.

WEST JEFFERSON — Iris Morphew has been a volunteer at many local organizations in Ashe County over the years and is still an active volunteer at 95 years old. On July 31, she was presented with the 2020 Governor's Volunteer Service Award for her lifelong commitment to serving the community.

Some of the organizations and locations where Morphew has dedicated her time and efforts include Ashe County Public Library, American Red Cross and Mount Jefferson Presbyterian Church. She commits an estimated 2,550 hours annually to these organizations she volunteers at.

Morphew volunteers at the library every Thursday to shelve and organize the DVD collection. She has also helped with the children's programs and is a committee member of Friends of the Library. She frequently brings goodies to serve other members at meetings and is known for her delicious cheese cookies. The library's kitchen is dedicated to Morphew and she has volunteered at the library longer than almost all of its current staff have been employed.

She has been an active volunteer at ARC blood drives for more than 30 years and is considered an ambassador for the Red Cross. While volunteering at drives, Morphew is responsible for filling out appointment cards, greeting donors and making them feel appreciated. When the local blood drives were held at the National Guard Armory, Morphew would arrive early and clean the tables. She also was known for taking donors home that did not drive.

Morphew has been very active in her church, Mount Jefferson Presbyterian Church, where she serves as an Elder and is a member of both the choir and handbell choir. She also sends practically every church member a card for their birthday each year. Morphew has helped in the church's Kid's Club for many years on Wednesday afternoons and brings snacks and serves as a grandmother figure to the children. She helps out in the church office each week to fold church bulletins and newsletters.

In the nomination letter, it was highlighted that a Morphew has only lived in West Jefferson for a decade and in the past when she lived in Lansing she would drive 15 minutes to meet her volunteer commitments.

"To live in such a rural area, this is just a testament of how committed Iris is in volunteering even in her 80s and 90s," reads the letter.

She was an active volunteer prior to moving to Ashe County and previously resided in Michigan where she served in several volunteer programs. During this time, Morphew was involved in a program reading textbooks to blind students, which included difficult subjects such as Chemistry. She also served as a parent volunteer in the classroom while her own children were in school.

SPARTA — AppHealthCare has confirmed, and are continuing to investigate, an outbreak of COVID-19 at Bottomley Evergreens and Farms in Sparta. As of presstime, there have been 102 confirmed cases and results are still pending for some individuals. The majority of the positive cases are reporting no symptoms, according to AppHealthCare.

After cases were confirmed at Bottomley Evergreens and Farms, the company requested assistance from AppHealthCare and working together decided to test the entire workforce, testing 398 individuals late last week. This type of response testing is needed to determine how far the virus has spread and prevent further transmission.

According to AppHealthCare at 10 p.m. on Monday, Aug. 3, Alleghany County had 165 total confirmed cases of COVID-19, 112 of which are currently active. In addition, three individuals were actively being monitored.

COVID-19 spreads most commonly through respiratory droplets when someone coughs or sneezes and is in close contact with others. When there is a confirmed case in a setting like Bottomley Evergreens and Farms, AppHealthCare wants to work quickly to offer testing to everyone since the virus can spread easily in these environments due to people working and living in close proximity to others.

“Due to the nature of this virus, we are concerned with the number of individuals who are positive and living and working within close proximity to others. We are continuing to work together with Bottomley Evergreens and Farms to implement control measures to limit further spread of the virus. We have provided public health and infection control guidance and will continue to work in partnership with them to prevent further spread. We urge everyone to practice kindness and think of others by practicing the three W’s — wear a face covering, wait at least 6 feet from others and wash your hands often or use hand sanitizer. These are actions that can be taken to prevent further spread and protect the Bottomley Evergreens and Farms workers and the entire Alleghany County community,” AppHealthCare Health Director Jennifer Greene said.

“The health and safety of our employees and the community are our priority. We are working closely with AppHealthCare to follow and adhere to public health and infection control guidance to prevent further spread. Safety protocols include symptom screenings before every shift, education about the spread of COVID-19 and providing protective equipment. We have isolated individuals who are sick and those who have been determined as close contacts are in quarantine. We are committed to protecting our community and will do our part to prevent additional spread of this virus, “ Bottomley Evergreens and Farms spokesman Paul Harrison said.

The COVID-19 call center is available to take COVID-19 related calls during regular business hours — (828) 795-1970 and you can also email questions to preparedness@apphealth.com. 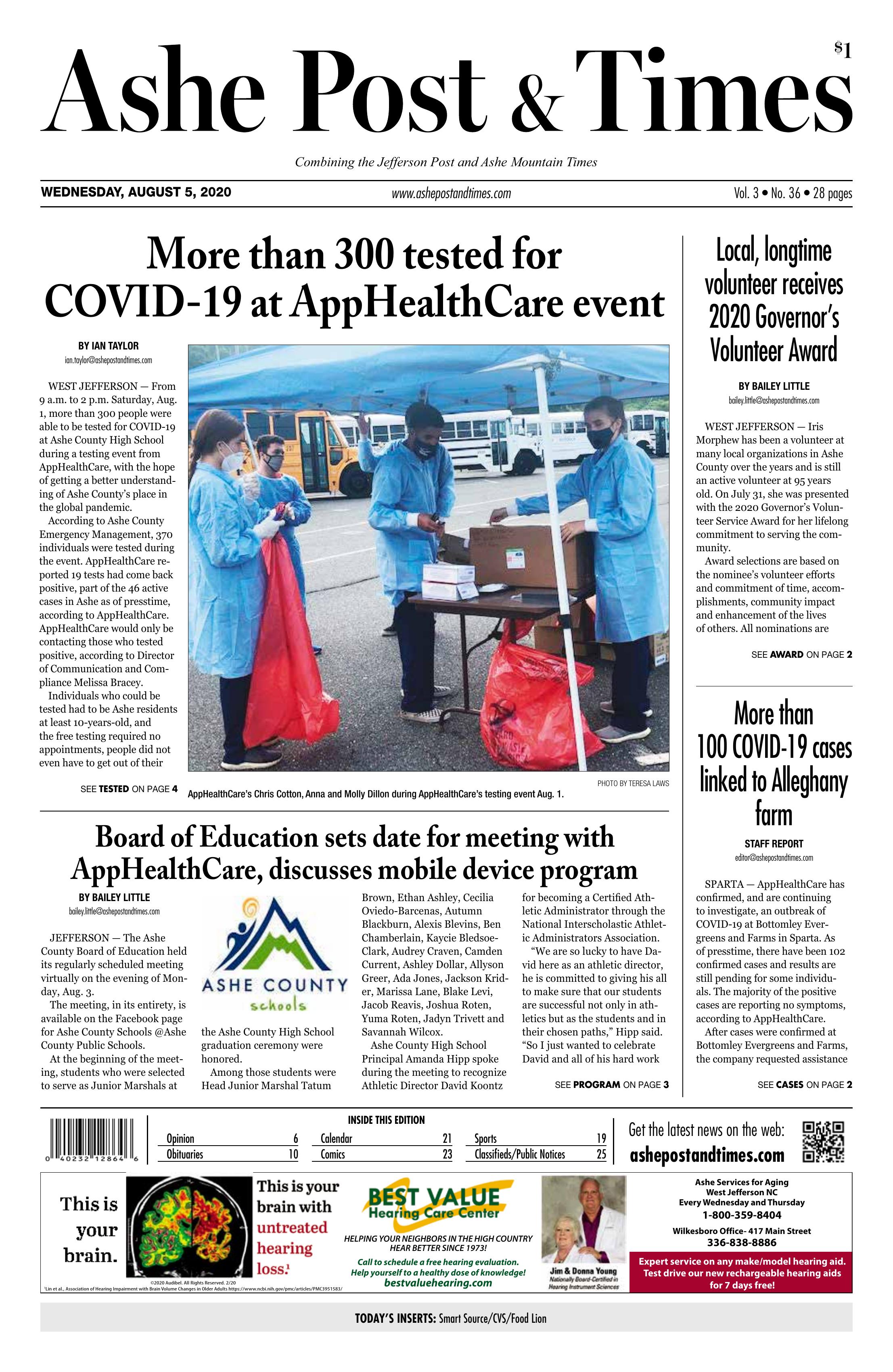