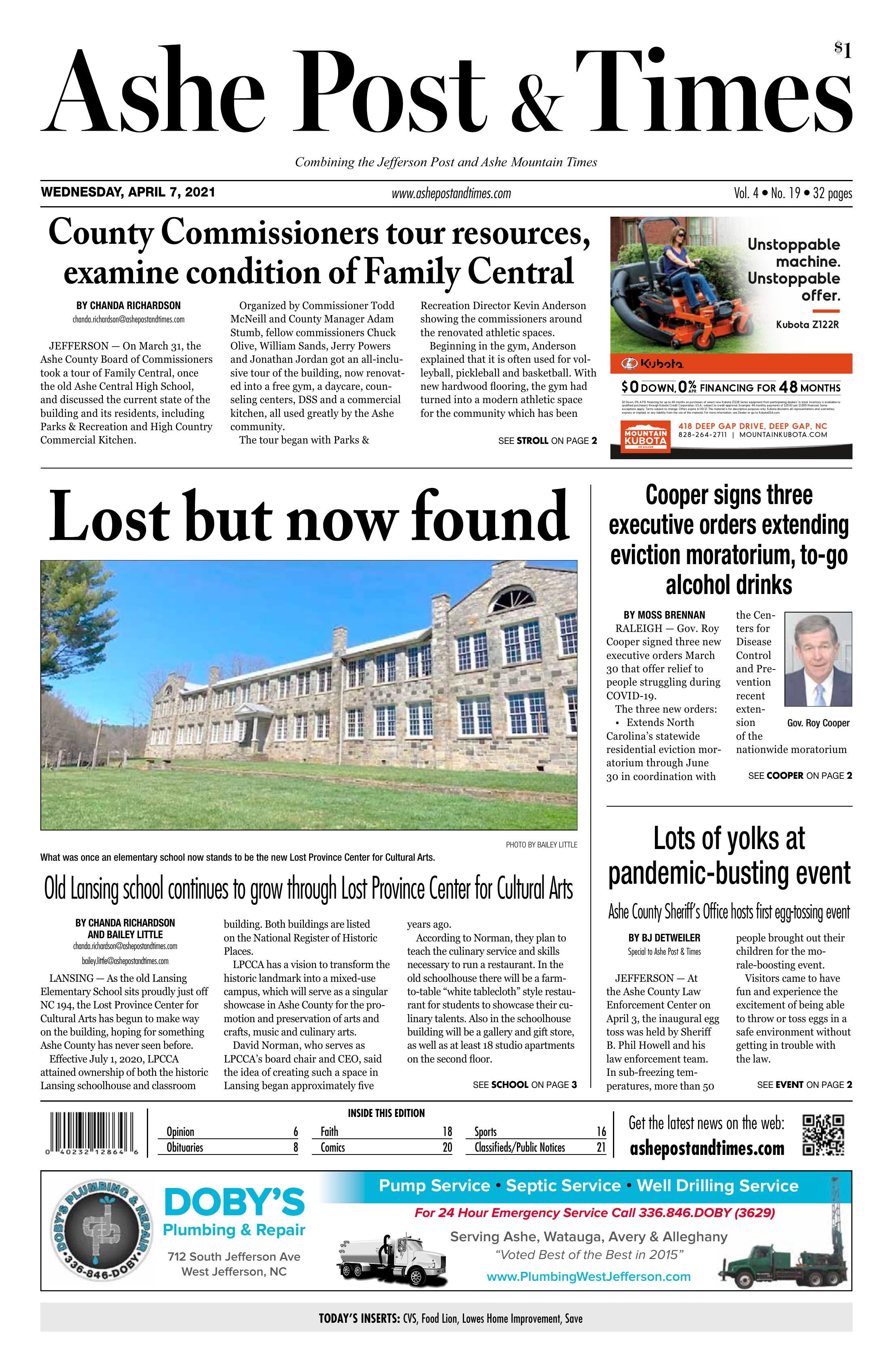 JEFFERSON — On March 31, the Ashe County Board of Commissioners took a tour of Family Central, once the old Ashe Central High School, and discussed the current state of the building and its residents, including Parks & Recreation and High Country Commercial Kitchen.

Organized by Commissioner Todd McNeill and County Manager Adam Stumb, fellow commissioners Chuck Olive, William Sands, Jerry Powers and Jonathan Jordan got an all-inclusive tour of the building, now renovated into a free gym, a daycare, counseling centers, DSS and a commercial kitchen, all used greatly by the Ashe community.

Beginning in the gym, Anderson explained that it is often used for volleyball, pickleball and basketball. With new hardwood flooring, the gym had turned into a modern athletic space for the community which has been much appreciated by Anderson.

The free gym includes a weight room, a room with treadmills and bike equipment and a boxing and wrestling training room.

“We have enough room and spacing to play three courts of pickleball, basketball and volleyball,” said Anderson in speaking about the new line spacing on the floor.

Anderson said that the turnout for the facilities have been steady despite the ongoing pandemic. The rooms have set capacity limits and cleaning has increased throughout the past year. He hopes that the free gym can continue to grow as well as the ball fields during the summer. Parks & Recreation is looking into acquiring the old middle school building after the new one is finished, something Anderson thinks would do well for the county as the pool attracts tourism and locals searching for aquatics.

The staff at the Family Central free gym have been able to create a cross fit training program now at Ashe Cross Fit. The organization began in the very halls of the old school when the free gym was first established.

County Manager Stumb then led the group on a tour of the remainder of the building, stopping by Mt. Jefferson Child Development, Jody Province counseling center and VAYA. Stumb explained that the county leases the units of the school to these organizations.

DSS also resides in the building along with AppHealthCare’s environmental portion.

County Extension Director and Extension Agent of Agriculture Travis Birdsell then brought the commissioners to the High Country Commercial Kitchen, a hidden gem according to Birdsell.

“This is one of the largest commercial kitchens in Western North Carolina,” said Birdsell.

The Kitchen is offered to caterers, rising businesses and those who are simply in need of kitchen space. To rent is $15 an hour, something Birdsell explained was lessened due to COVID-19. The school system has been allowed access to the kitchen for food storage and training for the cooking class at the high school.

A garlic and potato peeler is offered along with a popsicle machine, full running ovens and refrigerators, sinks, fried pie makers and bottle fillers.

The commissioners then toured the ball fields, now holding 4 softball/baseball fields and a soccer and football field. Stumb is hoping to fully convert the system to natural gas, having already succeeded with the Parks & Recreation occupancy of the building.

McNeill and the fellow commissioners said they hope to see more business and traffic within the halls in the upcoming months.

LANSING — As the old Lansing Elementary School sits proudly just off NC 194, the Lost Province Center for Cultural Arts has begun to make way on the building, hoping for something Ashe County has never seen before.

Effective July 1, 2020, LPCCA attained ownership of both the historic Lansing schoolhouse and classroom building. Both buildings are listed on the National Register of Historic Places.

LPCCA has a vision to transform the historic landmark into a mixed-use campus, which will serve as a singular showcase in Ashe County for the promotion and preservation of arts and crafts, music and culinary arts.

David Norman, who serves as LPCCA’s board chair and CEO, said the idea of creating such a space in Lansing began approximately five years ago.

According to Norman, they plan to teach the culinary service and skills necessary to run a restaurant. In the old schoolhouse there will be a farm-to-table “white tablecloth” style restaurant for students to showcase their culinary talents. Also in the schoolhouse building will be a gallery and gift store, as well as at least 18 studio apartments on the second floor.

Norman said that as they attract tourists and artists to the community, they want to be able to provide them with a place to stay. The plan is for these apartments to be short-term rentals primarily for students and educators, as well as tourists. One of the purposes for such space is to provide housing for students. This is due to the potential of classes such as metal working, glass blowing and pottery to last for several days.

“I want adults to be able to turn their hobbies into jobs, something for them to make a living from,” said Norman.

The school building itself, standing on 3.7 acres of LPCCA property, has been stripped of previous remnants and occupations, being left bare and open with visible stove-burnt roofing and wooden structures. Some of the old desks from before the school closed still remain, along with the original intercom system. The walls of the classrooms have been left with old wooden paneling, open with rarely any enclosures. Original doors stand, now with little use; 118 casement windows remain with aged roping and weight systems.

Norman hopes that the interior can soon hold a mid-century flavor in addition to the original rustic look as to keep close to the roots of the building. An estimated $6 million is on the table in restoration of the schoolhouse.

“I want people to fill this space,” Norman said. “I want to fill it full of adult learners and artists.”

The goal for LPCCA is not to bring people into the school to teach them the arts — it is to teach and to bring income to those who have the hands for cultural arts.

“I am less interested in someone coming in and learning how to do pottery,” said Norman. “I’m more interested in a single mom, a young woman, in the region who really has a passion for pottery and wants to learn enough to where she can open a studio and provide an income for herself and her family.”

Through the school, students will pay tuition, like any other college, but will be given the opportunity to work as they learn, ultimately paying for their education. Instead of leaving in debt, they will be leaving with the stepping stones to further their career and income.

Norman hopes that instead of coming out at a dead-end while drowning in student loan debt, the alumni from Lost Province can get out from behind the kitchen stove and create a life where they take what they have learned to better themselves and their families.

In the restoration process, the board for LPCCA has produced images of inspiration for the look and feel of the building.

The classroom building is currently being repainted and renovated for arts classes that will begin this summer. Classes will include personal wine-making, pottery and fiber arts, such as weaving and knitting.

Norman expects the project to take from 18 to 24 months.

More information about LPCCA and their efforts in Lansing can be accessed by visiting the Facebook and Instagram pages @LostProvinceArts or calling (336) 620-1107.

“Even though North Carolina is turning the corner on this pandemic, many are still struggling,” Cooper said in a statement. “These Executive Orders will help families stay in their homes and help hard-hit businesses increase their revenue.”

According to the governor’s office, Congress recently approved Federal Emergency Rental Assistance was recently approved by Congress, which gave North Carolina more than $700 million to provide relief to renters and landlords. Cooper’s office said they are working with the General Assembly and local governments to launch the updated version of rental assistance.

The to-go alcohol drink order — which allows establishments holding certain permits from the ABC Commission to sell mixed beverages to-go or for delivery — has been in place since Dec. 21. Those establishments include restaurants, hotels, private clubs, private bars and some distilleries.

More information on the extension of the eviction moratorium at files.nc.gov/governor/documents/files/33021-Eviction-Order-EXT-FAQ.pdf.

The processing of unemployment insurance claims executive order can be found at files.nc.gov/governor/documents/files/EO207-Unemployment-Insurance-Extension-1.pdf.

More information on the to-go beverages executive order can be found at files.nc.gov/governor/documents/files/33021-Mixed-Drink-EXT-FAQ.pdf.

JEFFERSON — At the Ashe County Law Enforcement Center on April 3, the inaugural egg toss was held by Sheriff B. Phil Howell and his law enforcement team. In sub-freezing temperatures, more than 50 people brought out their children for the morale-boosting event.

Visitors came to have fun and experience the excitement of being able to throw or toss eggs in a safe environment without getting in trouble with the law.

“We wanted to bring a little fun and laughter to our kids and adults during this difficult pandemic time and make happy memories for our kids,” Howell said.

Everyone was gathered to hear how the game would work, along with giving each child an egg — although the rules quickly went away as soon as the kids started tossing their own eggs.

At the end of the egg tossing, Howell allowed the group to toss eggs at him.

Almost everyone, including his deputies, took an opportunity to “egg the sheriff” in fun.

The well-organized event had cleaning stations available for everyone to use. Howell said that his team is working on several events coming up this year focusing on children.