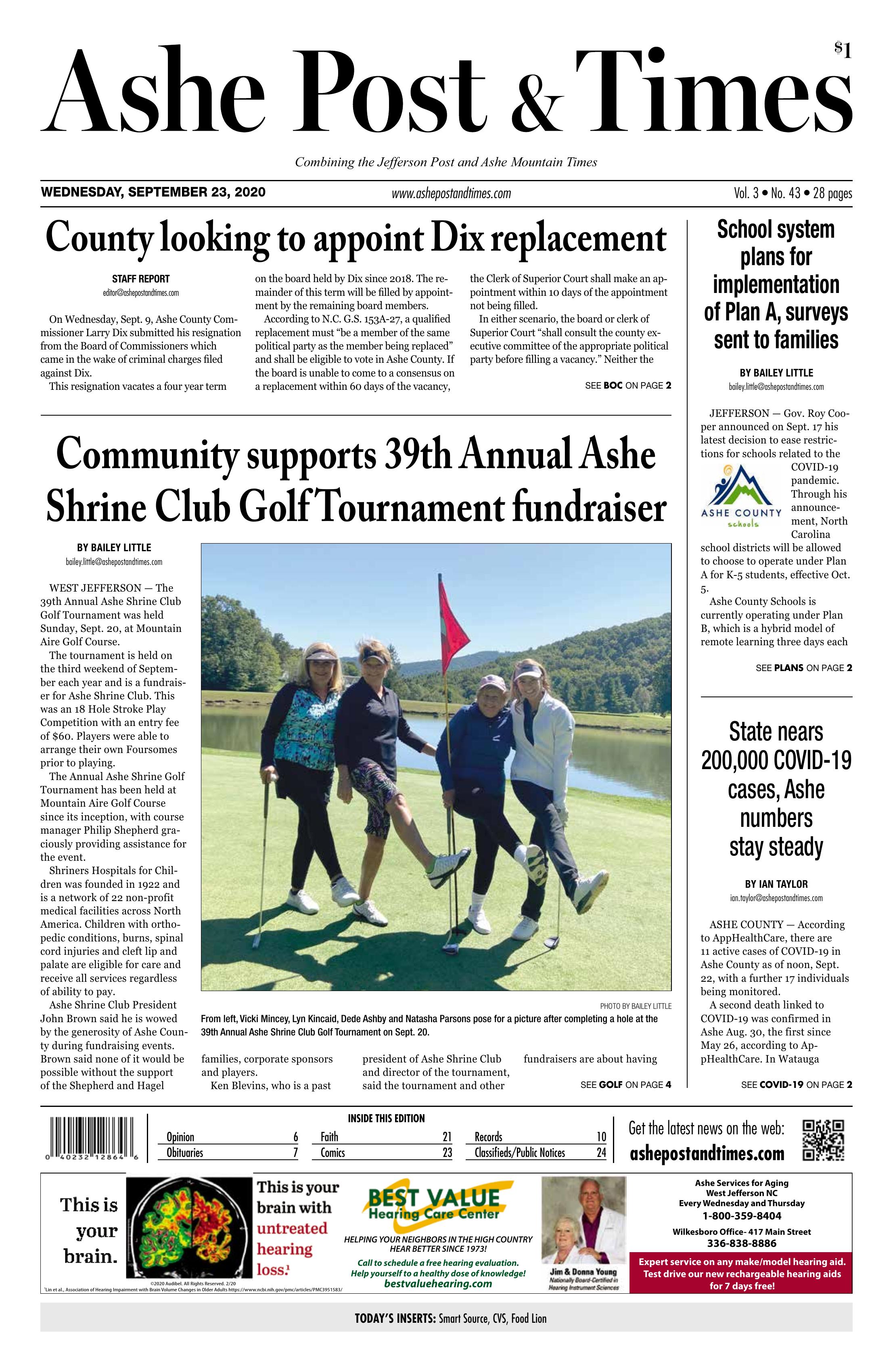 On Wednesday, Sept. 9, Ashe County Commissioner Larry Dix submitted his resignation from the Board of Commissioners which came in the wake of criminal charges filed against Dix.

This resignation vacates a four year term on the board held by Dix since 2018. The remainder of this term will be filled by appointment by the remaining board members.

According to N.C. G.S. 153A-27, a qualified replacement must “be a member of the same political party as the member being replaced” and shall be eligible to vote in Ashe County. If the board is unable to come to a consensus on a replacement within 60 days of the vacancy, the Clerk of Superior Court shall make an appointment within 10 days of the appointment not being filled.

In either scenario, the board or clerk of Superior Court “shall consult the county executive committee of the appropriate political party before filling a vacancy.” Neither the board nor the clerk is bound by the committee’s recommendation.

In this case, the appointed replacement will be a republican, those interested in being considered for the vacancy can contact the Ashe County Republican Party.

Following the vacancy, chairman to the board Todd McNeill commented that the board would look to move quickly to fill the position with a qualified candidate to avoid any disruption in the county’s business.

“Ashe County is navigating through a challenging season of life right now. We need a full and responsive board of commissioners that can act quickly to changing conditions. The county’s business can’t wait,” McNeill said.

Dix, 69, was arrested Aug. 27 and charged with four counts of having indecent liberties with a child. His next court date is Dec. 10.

Ashe Post & Times will provide updates for this story as they are made available.

From left, Vicki Mincey, Lyn Kincaid, Dede Ashby and Natasha Parsons pose for a picture after completing a hole at the 39th Annual Ashe Shrine Club Golf Tournament on Sept. 20.

The 2021 Canyon truck provided by West Jefferson Chevrolet was a prize for a lucky golfer who scored a hole-in-one on one of the courses at the 39th Annual Ashe Shrine Club Golf Tournament.

A picturesque view of Mountain Aire Golf Course can be experienced from the tee on Hole 3.

The tournament is held on the third weekend of September each year and is a fundraiser for Ashe Shrine Club. This was an 18 Hole Stroke Play Competition with an entry fee of $60. Players were able to arrange their own Foursomes prior to playing.

The Annual Ashe Shrine Golf Tournament has been held at Mountain Aire Golf Course since its inception, with course manager Philip Shepherd graciously providing assistance for the event.

Shriners Hospitals for Children was founded in 1922 and is a network of 22 non-profit medical facilities across North America. Children with orthopedic conditions, burns, spinal cord injuries and cleft lip and palate are eligible for care and receive all services regardless of ability to pay.

Ashe Shrine Club President John Brown said he is wowed by the generosity of Ashe County during fundraising events. Brown said none of it would be possible without the support of the Shepherd and Hagel families, corporate sponsors and players.

Ken Blevins, who is a past president of Ashe Shrine Club and director of the tournament, said the tournament and other fundraisers are about having fun and taking care of what they need to as Shriners.

Blevins said being a Shriner it is about dedication and a great desire to take care things that need to be taken care of when it comes to children experiencing health challenges.

Blevins spoke about the inclusive nature of the tournament as both men and women, young and old come out to participate.

There were a few changes at the tournament due to COVID-19 regulations and social distancing guidelines. In previous years, two large tents were set up for people to sign in. The two shotgun starts which typically take place at 8 a.m. and 1:30 p.m. which included a prayer and photo opportunities for players did not take place this year.

According to Brown, in previous years Lady Shriners would prepare the meal for the tournament featuring home-cooked meals or cookout items. This year, the Boondocks Brewing Craft Kitchen food truck provided food for tournament participants.

The number of participants in the tournament also increased, with nearly 160 players registered for the day.

According to Brown, the game of golf has increased in popularity worldwide during the pandemic since it is played outdoors and allows for adequate social distancing.

“I love it, I enjoy it. It’s not about me it is about the kids,” Brown said.”Worldwide, it is an amazing organization.”

Covid19
School system plans for implementation of Plan A, surveys sent to families

JEFFERSON — Gov. Roy Cooper announced on Sept. 17 his latest decision to ease restrictions for schools related to the COVID-19 pandemic. Through his announcement, North Carolina school districts will be allowed to choose to operate under Plan A for K-5 students, effective Oct. 5.

Ashe County Schools is currently operating under Plan B, which is a hybrid model of remote learning three days each week with two days of in-person instruction. There are also students enrolled in the district’s completely virtual option, Ashe Online.

“Ashe County Schools will be intentional and thoughtful in the decision for our students, staff and families returning to school under the Plan A option for these grade levels,” Cox said in the message.

She added that the school system will continue to follow health and safety guidelines provided by the Department of Health and Human Services. They will also accept input from teachers, key staff members and parents to determine when and how to transition back into school buildings.

Cox said as a district they are aware that they have to take into account many different aspects in order to safely return to school buildings including cleaning protocols, meal preparation and distribution and transportation. There will be other considerations for a transition to Plan A such as potential class reassignments due to increased capacity, availability of substitute teachers and additional supplies and cleaning PPE for staff.

The school system is in the process of creating surveys for staff and parents to determine what will be needed to send current Plan B students to school under Plan A.

ACS also provided a K-5 Plan A survey for families with elementary school students the weekend of Sept. 18. The purpose of the survey was to receive feedback to be used in the planning process for implementation of Plan A. It can be accessed by visiting the website of the elementary school in which a student is enrolled.

The survey contains questions such as how many K-5 students parents have enrolled with ACS, whether or not the students currently attend under Plan B or Ashe Online and if bus transportation is needed.

At this time, ACS will continue to adhere to Plan B for grades six through twelve while also upholding their commitment to Ashe Online students.

ASHE COUNTY — According to AppHealthCare, there are 11 active cases of COVID-19 in Ashe County as of noon, Sept. 22, with a further 17 individuals being monitored.

Toe River Health District announced Thursday, Sept. 3, the first death linked to COVID-19 in Avery County. Across the state, there have been 3,247 deaths, according to the North Carolina Department of Health and Human Services.

North Carolina has 195,549 confirmed cases of COVID-19 (novel coronavirus) as of noon on Tuesday, Sept. 22, according to the NCDHHS. This is almost 9,000 more cases than the same time a week earlier.

Gov. Roy Cooper on Sept. 1, announced that North Carolina would move into “Safer at Home Phase 2.5,” easing COVID-19 restrictions on more types of businesses and increasing the limits for gatherings.

The new phase began at 5 p.m. Friday, Sept. 4, and expires at 5 p.m. on Oct. 2 unless extended or modified. Limits on mass gatherings will increase to 25 people indoors and 50 people outdoors, Cooper said. Gyms and other indoor exercise facilities — such as yoga studios, martial arts and rock climbing, as well as skating rinks, bowling alleys, indoor basketball and volleyball — can open at 30 percent capacity.

Playgrounds will be allowed to open, and museums and aquariums can open at 50 percent capacity. The age requirement for mask wearing will include children down to age 5.

Facial coverings are required for all employees and customers of retail businesses and restaurants as well as workers in manufacturing, construction, meat processing and agriculture settings.

Exceptions are made for people with medical conditions and children younger than 11, those at home and people walking or otherwise exercising outside when not within six feet of others.’

Ashe County declared a state of emergency March 22, which was followed by the towns of West Jefferson, Jefferson and Lansing.

An amendment banning short-term rentals in the county expired May 8, and was not extended.

The Ashe County Courthouse is observing normal business hours, but residents are encouraged to take advantage of online resources or to call the needed office. Upon entry to the courthouse, each visitor is required to wear a mask and have their temperature checked.

West Jefferson Town Hall reopened Tuesday, June 2, following approval from the West Jefferson Board of Aldermen the night before.

According to then-Lansing Town Clerk Marcy Little, Lansing Town Hall reopened July 26. There is a limit of two people at a given time in the building.

On March 12, Ashe Memorial Hospital’s expanded visitor restrictions went into effect. The hospital asks that those who are not members of a patient’s immediate family refrain from visiting unless absolutely necessary, regardless of the visitor’s age or health status.

Also closing are recreation facilities at recreation sites in the National Forests in N.C. were temporarily shut down. The closures include picnic pavilions, shooting ranges and all restrooms.

These shutdowns are in addition to previous announcements about developed campgrounds, several large developed day use areas, visitor centers and Off-Highway Vehicle trail systems, which remain temporarily shut down.

The Ashe County Public Library re-opened Monday, June 15, with limited hours, services and building capacity. The Ashe County Public Library’s hours of operation will be Monday-Thursday from 10 a.m. until 6 p.m. and Friday and Saturday from 10 a.m. until 4 p.m. The first hour of service each day is currently being reserved for people most at risk of dying from COVID-19.

The library will still be offering curbside pickup options and there will be no in-person programs or meetings. For more information about Ashe County Public Library, visit the website at www.arlibrary.org/ashe or call (336) 846-2041.

The Florence Thomas Art School reopened on June 2. The art school has announced plans for events, classes and workshops.

Ashe County Park reopened May 11, and all facilities including bathrooms, playgrounds, courts, skate park and shelters will remain closed.

The NCHSAA announced it would allow the start of summer activities on June 11. Ashe County High School began off-season sessions July 6. The NCHSAA has since released a revised sports calendar for the 2020-21 school year, with no sports starting until November.

Family Central’s park office is closed but staff can be contacted at (336) 982-6185 or by email at kevinanderson@ashecountygov.com. The gym and workout room at Family Central will be closed until further notice.

At the Ashe County Detention Center, new inmates are being quarantined for anywhere from 15 to 30 days upon arrival. Air filters have been added in between the Detention Center’s four pods, hopefully keeping any disease contained should it arrive.

Ashe County Sheriff’s Office deputies are now doing as much as they can remotely, and have also been instructed to avoid entering confined spaces, instead opting to conduct business outside. Sheriff Phil Howell said the ACSO still wants people to know they are in the community.

It was announced July 14 that the state would have a school year following Plan B, with Ashe County Schools stating they planned to alternate students’ days in the classroom when the year begins, Ashe Post & Times previously reported.

Students went back to school for the first time since March on Aug. 17.

For continued updates and more information regarding the COVID-19 pandemic, visit www.ashepostandtimes.com.