Grand Champions and tree growers Rusty and Beau Estes get ready to send their tree off to the White House.

A crowd gathers for the send-off ceremony for the White House Blue Room Christmas tree.

With a little Christmas magic, Santa and Mrs. Claus led the crowd in sending off the Christmas tree to Washington D.C.

Dwayne Patterson, director of North Carolina Division of Parks and Recreation, said that the division is proud to be the “co” in “cooperative” while working with farmers like the Estes family.

Led by a team of Shetland ponies, Santa and Mrs. Claus greeted the crowd at the Ashe County Courthouse to bring some holiday spirit to the event.

Santa, Mrs. Claus and the selected tree make their entrance to the Ashe County Courthouse on Nov. 17.

Santa Claus and Pastor Michael Lea give the benediction at the Christmas tree send-off.

JEFFERSON — Peak Farms sent off their finest tree for display in the White House’s Blue Room this holiday season during a community event recognizing the farm owners, the Estes family, for their accomplishment as Grand Champions of the National Christmas Tree Association’s Christmas tree contest. 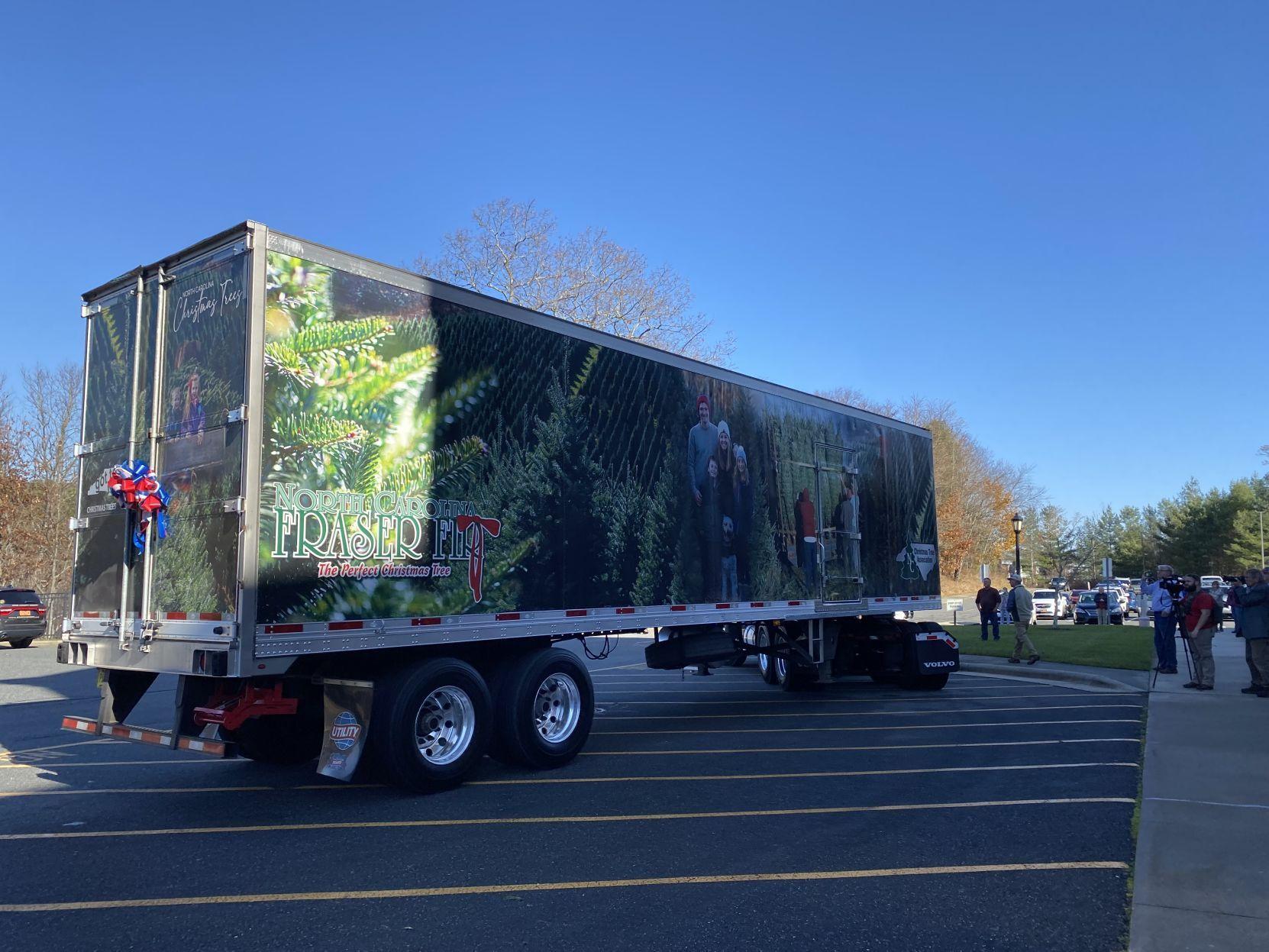 In a newly-wrapped truck, the White House Christmas tree will make its way across states advertising the trees of Ashe County.

“Thanks to not only Peak Farms and the Estes family, but also the rich heritage of Christmas Tree farming in Ashe County,” Honeycutt said. “In doing this (ceremony), we recognize the importance of every Christmas tree placed in every home. It becomes the focal point of the celebration, the backdrop of all the family pictures and the keeper of the precious keep-sake ornaments.”

The 19-foot tall Fraser fir is the third tree that Peak Farms has sent to the White House. Trees were previously sent in 2008 and 2012 for former First Ladies Laura Bush and Michelle Obama. Peak Farms was also the provider in 2018 for former Vice President Mike Pence’s residence.

Peak Farms has been growing trees since 1979 and now have over 400,000 Christmas trees growing on their farms as a multi-generational family farm operation.

This year’s Fraser fir is also North Carolina’s 14th tree to get featured in the Blue Room, placing the state as the top producer of Christmas trees for the White House.

“North Carolina is the best place to grow (Christmas trees) and live in,” Rusty Estes said.

“I believe that this year, once again, Ashe County will be the largest producer of Christmas Trees in the nation,” said Birdsell.

Farmers in Ashe County grow 24 million trees on 14,000 acres of land, according to Birdsell, and this time of the season is the busiest of the year as farmers work to finish cutting over three million trees and ship them all over the country in time for Thanksgiving.

“We never lose sight that each and every one is special to individual families. Each family searches for the tree that is worthy to be displayed in their home, allow its branches to hold their memories, place their gifts around it and adorn the top with an angel or a star,” said Birdsell.

“We watched real trees brighten hearts and minds and signal the start of a Holiday season that is about hope and our promise for the future. We believe that Christmas begins with a real tree and real trees begin in Ashe County,” Birdsell said in closing.

Chairman of the Ashe County Board of Commissioners Todd McNeill said the honor for the county will spread throughout the community and White House as the tree is placed in the Blue Room.

The Estes family was joined by a variety of representatives from organizations, which have helped them and supported the Ashe County Christmas tree industry, including the North Carolina Christmas Tree Association, Ashe County local government, the NC Cooperative Extension, representatives from the NC Department of Agriculture and Consumer Services, the Office of Gov. Roy Cooper, the office of US Senator Richard Burr and Thom Tillis, the office of US Representative Virginia Fox, North Carolina Division of Parks and Recreation and the Ashe County Chamber of Commerce.

Back in October, White House Superintendent of Grounds Dale Haney made the journey to Ashe County to make the selection for the First Lady’s Blue Room Christmas Tree. After being in the choose and cut business since the beginning of his role, Haney chose a Fraser fir that stood just a little over 19 feet tall. The tree selected is said to be at least 30-years old, according to Estes.

The Ashe County youth football team chanted as they rode through the parade.

Grand Marshal Eric Thomas from WBTV waved to the crowd at the WJ Holiday Parade.

Zada Little lead the ACHS Cheerleaders through the parade on Nov. 20.

Dillan Dominguez manned the float for fallen veterans at the Holiday Parade.

The Girl Scouts handed out candy and spoke to locals and tourists on Nov. 20.

The ACHS JROTC marched the streets of West Jefferson during the Holiday Parade.

As they marched, Caden Burgess leads the group in military song.

Dylan Koontz smiles as he watches his fellow JROTC members.

Todd McNeill and family promote their tree business and smile along to the crowd on Nov. 20.

The Husky Vanguard Marching Band riled up the crowd with Holiday cheer.

Alisha Pittman, Maddy Waddell and Amanda and Jeremy enjoy their time at the West Jefferson Parade.

The Shriners rode small trucks through the parade, inciting joy throughout the crowd.

A small pup looks on at the crowd as he rides with the Shriners.

Dancin’ Debbie’s dances their way through the streets.

April’s School of Dance smiles as they make their way through the parade.

WEST JEFFERSON — With Thanksgiving and Christmas just around the corner, West Jefferson closed off its primary street for its annual Holiday Parade.

Downtown West Jefferson was filled to the brim with community members, tourists and more as the parade made its way down the street.

The parade began at 3 p.m. and ended at approximately 5 p.m. Parade-goers were greeted with holiday cheer, candy, carols, Santa Claus, the Grinch and other Christmas festivities.

Due to the COVID-19 pandemic, the parade has been put on hold for several years. Having this been the first parade since lockdown, citizens of Ashe County were more than thrilled to enjoy the event.

Third-grade students, including Meridy Brown, took time to learn about litter and how to keep Ashe County clean.

Keep Ashe Beautiful (KAB) sponsored the How Long Does It Last? group activity related to decomposition rates of common recyclable items. KAB provided students with bags of recyclable materials to sort materials based on how long it took the items to decompose. Students were amazed to discover that straws take roughly 100 years and that glass is one of the longest-lasting man-made materials on earth. After the hands-on learning experience, students collaborated to engineer solutions to limit littering and reduce, reuse, and recycle in Ashe County. Students also learned the song, “The World Is Not Your Garbage Can.”

Thanks to the KAB educational committee, students were given “No Trash In Ashe! Think Before You Toss” activity booklets, a goodie bag with a variety of items, and an invitation to “Be A Litter Getter” by picking up around their home or a neighbor’s, friend’s or family member’s home.

HIGH COUNTRY — The North Carolina state budget signed into law on Nov. 18 provides more than $75 million in funding for Ashe, Avery and Watauga counties, including money for a parking facility in Watauga, sidewalks in Lansing and county building renovations in Avery.

“This budget moves North Carolina forward in important ways,” Gov. Roy Cooper said when he signed the budget into law. “Funding for high speed internet, our universities and community colleges, clean air and drinking water and desperately needed pay increases for teachers and state employees are all critical for our state to emerge from this pandemic stronger than ever. I will continue to fight for progress where this budget falls short but believe that, on balance, it is an important step in the right direction.”

“After months of productive negotiations with the Governor, I’m proud to see this budget pass and be signed into law,” Ballard said in a press release. “As the chairwoman of the Senate Education Committee, it’s reassuring to see Democrats and Republicans come together to work on behalf of our students across North Carolina. I am also glad to know our High Country residents will keep more of their hard-earned money and see major infrastructure improvements funded in their community because of this budget.”

“This is a historic budget that includes critical funding for our community and the people of North Carolina,” Pickett said in a press release. “I am proud to have helped make sure the needs and concerns of our region are met.”

“For the past decade, North Carolina Republicans have enacted smart, fiscally responsible budgets,” Daniel said in a press release. “Because of that, we’ve seen healthy budget surpluses year after year. This year’s budget builds on that by providing major tax relief to families and major infrastructure improvements, including $128 million for projects in our community.”

For Ashe and Watauga counties, the following funds are included in the budget:

For Avery County, the following funds are included in the budget:

The budget also provides money for education across the state.

“Even though we are over four months into the fiscal year, I am very grateful that we have a budget in place and we can plan for the remainder of the school year,” Watauga County Schools Superintendent Scott Elliott said. “There are many positive aspects to the budget, including the bonuses for our hard working school staff members and the increased investments in school facilities and community infrastructure. I am especially encouraged by the positive bipartisanship and leadership that our state so badly needs right now. Maybe this is a sign of more positive things to come.”

Watauga County Association of Educators representative Adrienne Stumb agrees that there are good items in the budget for educators, as she said it appears that legislators are moving more North Carolina Education Lottery money actually into public schools in the form of construction and repair of schools.

“These capital expenditures are long overdue, and we appreciate that our lawmakers saw this as a need,” Stumb said.

In addition, Stumb said the wage increase for classified staff — like custodians, cafeteria workers, bus drivers and teacher assistant — is a step in the right direction toward honoring the work these people do to keep “our kids safe, fed, in school and fully supported in their education.”

However, the wage language for teachers, Stumb said, is disappointing.

“While many of the press releases tout an ‘average five-percent pay hike for teachers,’ in reality, this is only a 1.3-percent pay increase this year with a similar 1.3-percent pay increase next year,” Stumb said. “The step increases are also there but this leaves our veteran teachers, many who are not eligible for step increases due to outdated salary charts, without a wage that matches inflation. We would appreciate our lawmakers being more upfront to taxpayers and educators if they feel they cannot provide fairer salaries.”

Click and hold your mouse button on the page to select the area you wish to save or print. You can click and drag the clipping box to move it or click and drag in the bottom right corner to resize it. When you're happy with your selection, click the checkmark icon next to the clipping area to continue.