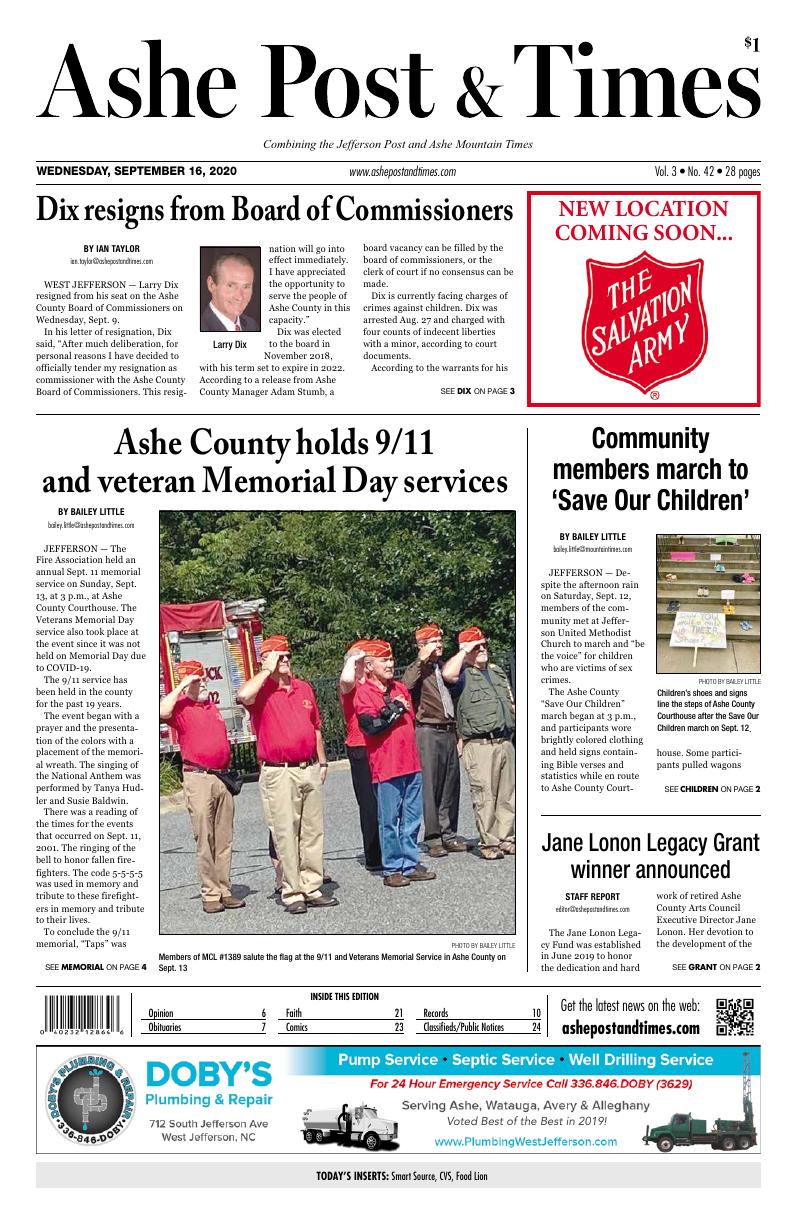 News
featured
Dix resigns from Board of Commissioners
By Ian Taylor ian.taylor@ashepostandtimes.com

WEST JEFFERSON — Larry Dix resigned from his seat on the Ashe County Board of Commissioners on Wednesday, Sept. 9.

In his letter of resignation, Dix said, “After much deliberation, for personal reasons I have decided to officially tender my resignation as commissioner with the Ashe County Board of Commissioners. This resignation will go into effect immediately. I have appreciated the opportunity to serve the people of Ashe County in this capacity.”

Dix was elected to the board in November 2018, with his term set to expire in 2022. According to a release from Ashe County Manager Adam Stumb, a board vacancy can be filled by the board of commissioners, or the clerk of court if no consensus can be made.

Dix is currently facing charges of crimes against children. Dix was arrested Aug. 27 and charged with four counts of indecent liberties with a minor, according to court documents.

According to the warrants for his arrest, Dix “unlawfully, willfully and feloniously did take and attempt to take immoral, improper and indecent liberties” with a victim under the age of 16.

At his first court date Sept. 3, Dix’s case was continued to Dec. 10, and it was ordered that should he be released from law enforcement custody, he is to have no contact with his alleged victim.

Dix was released from the Ashe County Detention Center Sept. 3 under a $24,900 secured bond, a reduction from his original $200,000 secured bond.

Ashe Post & Times will provide updates for this story as they are made available.

The American Flag serves as a patriotic backdrop as the Fire Association’s colorguard completes the presentation of the colors at the Sept. 13, 9/11 Memorial Service at Ashe County Courthouse.

Several members of the community attended the Fire Association’s annual 9/11 Memorial Service on Sept. 13 at Ashe County Courthouse to honor the memory of those who lost their lives in Sept. 11, 2001.

Susie Baldwin, along with Tanya, Kirklyn and Kenadie Hudler sing ‘Amazing Grace’ at the end of the Veteran Memorial Service at Ashe County Courthouse.

Ashe County Sheriff B. Phil Howell reads some of the names of county veterans that passed away between May 2019 and May 2020.

Capt. Lisa Carrow reads the names of 12 Ashe County Veterans who passed away in the past year to honor their memory.

Lt. Darrel McClure reads aloud 13 names of veterans in Ashe County who passed away between May 2019 and May 2020 at the memorial service on Sept. 13.

JEFFERSON — The Fire Association held an annual Sept. 11 memorial service on Sunday, Sept. 13, at 3 p.m., at Ashe County Courthouse. The Veterans Memorial Day service also took place at the event since it was not held on Memorial Day due to COVID-19.

The 9/11 service has been held in the county for the past 19 years.

The event began with a prayer and the presentation of the colors with a placement of the memorial wreath. The singing of the National Anthem was performed by Tanya Hudler and Susie Baldwin.

To conclude the 9/11 memorial, “Taps” was played and the following was read aloud:

“The aftermath of Sept. 11, 2001, resulted in 2,977 deaths. Included in those deaths were 343 firefighters, 8 EMS personnel and 60 law enforcement officers. May we never forget the ultimate sacrifice our brothers and sisters made that day and continue to remember the legacy they left behind.”

The ceremony was then turned over to Joshua Roten, owner of Ashelawn Memorial Chapel, Gardens and Badger Funeral Home to honor veterans who died in Ashe County from May of 2019 to May of 2020.

Susie Baldwin, along with Tanya Hudler and her daughters, Kenadie and Kirklyn, performed “Amazing Grace.”

Marchers make their way across the intersection in Jefferson during the Save Our Children march in Ashe County.

On Sept. 12 several community members of all ages participated in a walk for Save Our Children in Jefferson.

Members of the community make their way to the courthouse during the Save Our Children march in Ashe County on Sept. 12

Children’s shoes and signs line the steps of Ashe County Courthouse after the Save Our Children march on Sept. 12.

JEFFERSON — Despite the afternoon rain on Saturday, Sept. 12, members of the community met at Jefferson United Methodist Church to march and “be the voice” for children who are victims of sex crimes.

The purpose of the march was to “walk a mile” in the shoes of victims and survivors of child trafficking and to raise awareness for those who do not have a voice or suffer in silence.

Upon arriving at the courthouse, those in attendance placed the shoes from the wagons onto the courthouse steps along with signs that fit the appearance and size of the shoes.

One pair of small sandals was coupled with a sign that read “10 year old girl raped and killed at family member’s wedding” while a pair of boy’s running shoes rested beside a sign reading “13 year old boy sexually assaulted by 31 year old aunt”.

The group then observed a moment of silence for all victims, and members of the group had an opportunity to share their experience with the crowd if they were comfortable doing so. Hearing some of the experiences shared evoked emotion and brought tears to the eyes of several in attendance.

The organizers of the march on Sept. 12 were Allison Shoemake, Mandy Rash and Chelsey Sullivan.

Shoemake said a large part of her motivation for planning the march was due to her previous experience working with kids in group home situations. She said she has personally seen the “underbelly” of the system and how people who sexually assault minors continue to walk free.

Rash spoke about the importance of protecting each other’s children and realizing that child trafficking is real and it is close to home.

Both Shoemake and Rash feel strongly about the community coming together to help put an end to child trafficking.

“It takes a village and this is our village,” Shoemake said.

Prior to the march, Rash said she hopes the event inspires people to speak up in the future.

The organizers also extended their gratitude to Bohemia in West Jefferson for allowing them to meet and complete the planning process and to officer Kevin Richardson of Jefferson Police Department for helping with last-minute staging changes.

Plans are in the works to hold future marches and a vigil for victims in the near future. They also hope to hold seminars to bring awareness and teach people how to spot and properly report suspicious behavior.

Those who are interested in following this movement are encouraged to join the Facebook group #SaveOurChildren Ashe County, NC.

The Jane Lonon Legacy Fund was established in June 2019 to honor the dedication and hard work of retired Ashe County Arts Council Executive Director Jane Lonon. Her devotion to the development of the arts in Ashe County is the motivation to continue that work in perpetuity. The Legacy Fund will grant money yearly to projects that feature the fine arts, performing arts or heritage arts of the Appalachians in Ashe County.

The goals of the grant to promote art activities and art-related projects that contribute to tourism and economic development and celebrate the heritage of Ashe County and the Appalachian region. There was a pool of strong applications that featured projects in a variety of disciplines and the committee wishes it could have funded every request. The committee selected one winner after careful consideration, and a $2,500 Jane Lonon Legacy Grant will be awarded to the Ashe County Mural Connectivity Project.

The Ashe County Mural Connectivity Project will create a series of murals, the first of which will be at the New River State Park. These murals will reflect Ashe County’s natural beauty and artistic talent. The overall goal of the project is to create a connection between the arts and nature. The murals will connect, introduce and bridge together Ashe County’s natural assets with the cultural arts community, thus enhancing the economy, tourism & awareness of our natural assets.

The next grant process will begin in the Spring of 2021. For more information contact the Arts Council at (336) 846-2787 or info@ashecountyarts.org. 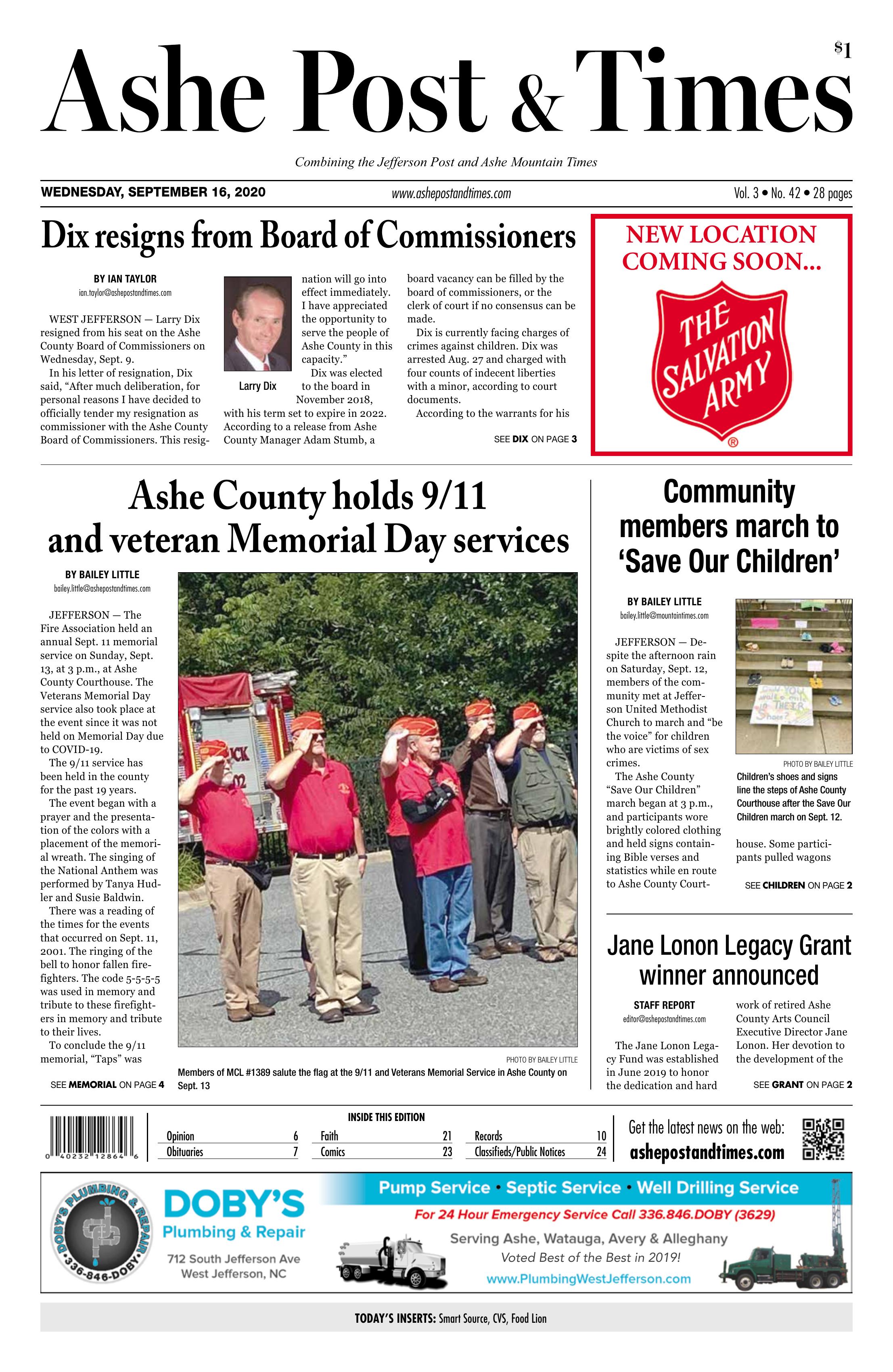