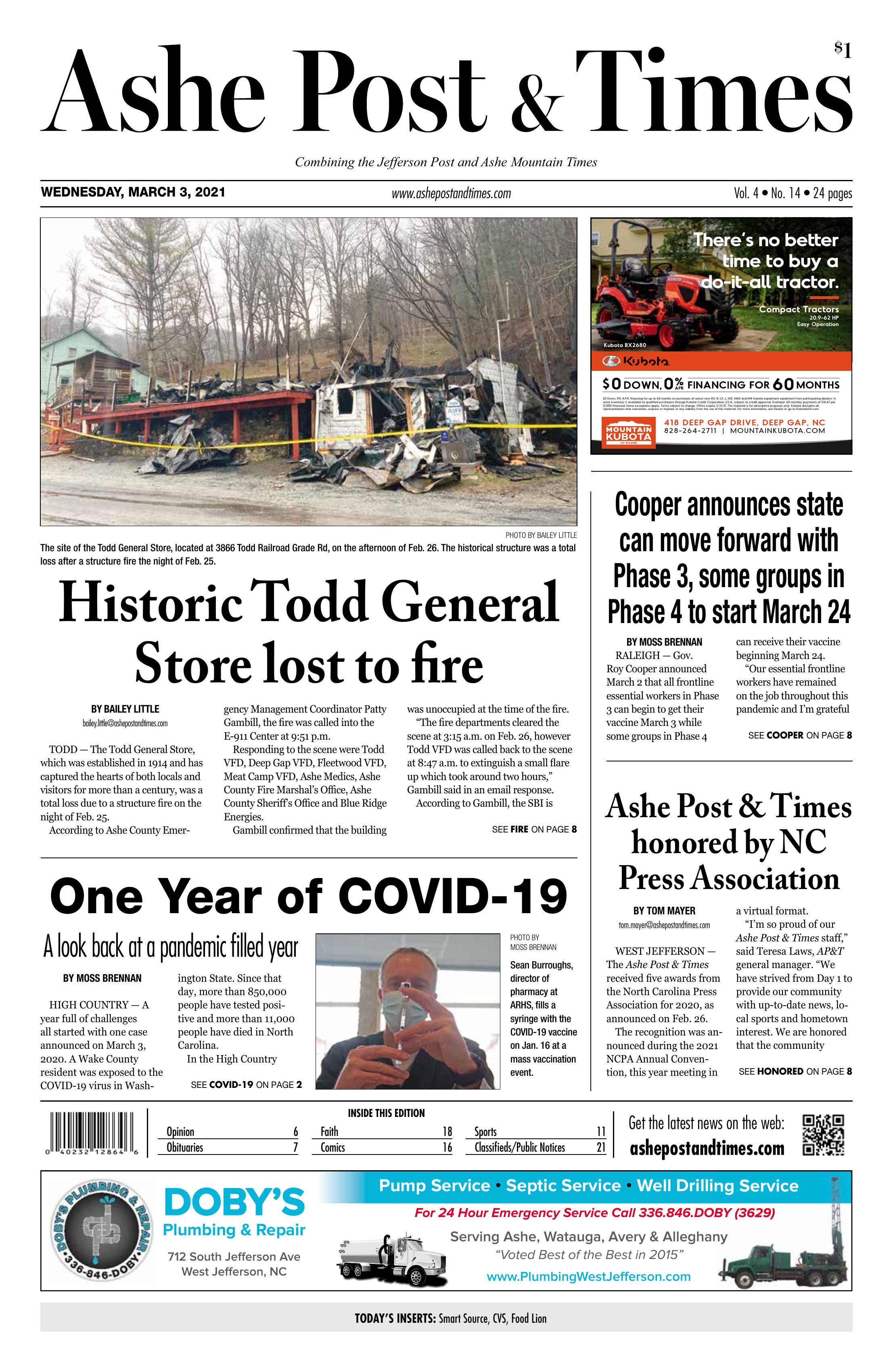 Pictured is The Todd General Store around 11 p.m. on the night of Thursday, Feb. 25.

The scene in Todd around 11 p.m. as several local volunteer fire departments tended the flame and billowing smoke at The Todd General Store.

Pictured is The Todd General Store engulfed in flames on the night of Feb. 25.

The site of the Todd General Store, located at 3866 Todd Railroad Grade Rd, on the afternoon of Feb. 26. The historical structure was a total loss after a structure fire the night of Feb. 25.

TODD — The Todd General Store, which was established in 1914 and has captured the hearts of both locals and visitors for more than a century, was a total loss due to a structure fire on the night of Feb. 25.

According to Ashe County Emergency Management Coordinator Patty Gambill, the fire was called into the E-911 Center at 9:51 p.m.

Gambill confirmed that the building was unoccupied at the time of the fire.

“The fire departments cleared the scene at 3:15 a.m. on Feb. 26, however Todd VFD was called back to the scene at 8:47 a.m. to extinguish a small flare up which took around two hours,” Gambill said in an email response.

According to Gambill, the SBI is assisting in the fire investigation because it was a commercial structure.

Ashe County Fire Marshal Jonathan Stansberry said the point of origin was the west end of the building on the inside of the wall. He added that the fire pattern suggests an area in the kitchen located near the center of the west wall.

The historic landmark’s newest owners, the Connell family, had worked diligently to renovate the building since purchasing it in May 2019. The family had reopened the store in the summer of 2020.

In a Facebook post from their account on Feb. 27, The Todd General Store described how thankful they are from everybody who has reached out and made donations. They also shared photos of items that survived the blaze on Feb. 26, including the National Register of Historical Places plaque and the “Todd’s General Store” sign which has been placed on the porch alongside a sign that says “Resilience.”

According to Stansberry, the cause of the fire has not yet been determined and there have been no new developments in the investigation as of presstime.

Ashe Post & Times will provide updates to this story at www.ashepostandtimes.com as more information becomes available.

RALEIGH — Gov. Roy Cooper announced March 2 that all frontline essential workers in Phase 3 can begin to get their vaccine March 3 while some groups in Phase 4 can receive their vaccine beginning March 24.

“Our essential frontline workers have remained on the job throughout this pandemic and I’m grateful for their work,” Cooper said at the March 2 press conference.

Before Cooper’s announcement, Phase 3 was originally open to only educators with it opening up to the other groups in the phase on March 10. The rest of Phase 3 includes first responders and emergency personnel such as police, firefighters and rescue workers. It also includes people who are working in manufacturing, grocery stores, government workers and clergy, among others.

Beginning March 24, those with medical conditions that put them at a higher risk for severe COVID-19 illness and those who live in certain congregant living facilities in Phase 4 can get their vaccine. Currently, North Carolina is in the first three phases of its vaccine rollout plan for those over 65, health care workers and frontline essential workers.

More information on Phase 4 can be found at covid19.ncdhhs.gov/vaccines/find-your-spot-take-your-shot/deeper-dive-group-4.

Cooper said the ability to move forward to the rest of phase 3 and 4 is because of the rates of vaccinations and increased vaccine supply to the state. Nearly 300,000 first COVID-19 doses is set to arrive in the state this week Cohen said.

“We’ve been able to move this quickly because of the great work of the people of North Carolina,” Cooper said.”

WEST JEFFERSON — The Ashe Post & Times received five awards from the North Carolina Press Association for 2020, as announced on Feb. 26.

The recognition was announced during the 2021 NCPA Annual Convention, this year meeting in a virtual format.

“I’m so proud of our Ashe Post & Times staff,” said Teresa Laws, AP&T general manager. “We have strived from Day 1 to provide our community with up-to-date news, local sports and hometown interest. We are honored that the community stands behind us and we will continue to work hard for our readers and advertisers to be the No. 1 local newspaper you can count on.”

Mountain Times Publications as a whole — which encompasses the Watauga Democrat, The Blowing Rocket, The Avery Journal-Times and The Ashe Post & Times, as well as many special publications — collected a total of 19 editorial and advertising awards.

“I’m particularly proud of the effort that each and every one of our team members put into producing our local newspapers this year. While it is always enjoyable to be recognized by your peers, the continued support of our community and readers of quality journalism is what makes me most proud,” said Gene Fowler, Mountain Times Publications group publisher.

At the virtual event Feb. 26, The Blowing Rocket collected one award, The Avery Journal-Times was honored with five awards and the Watauga Democrat earned eight awards.