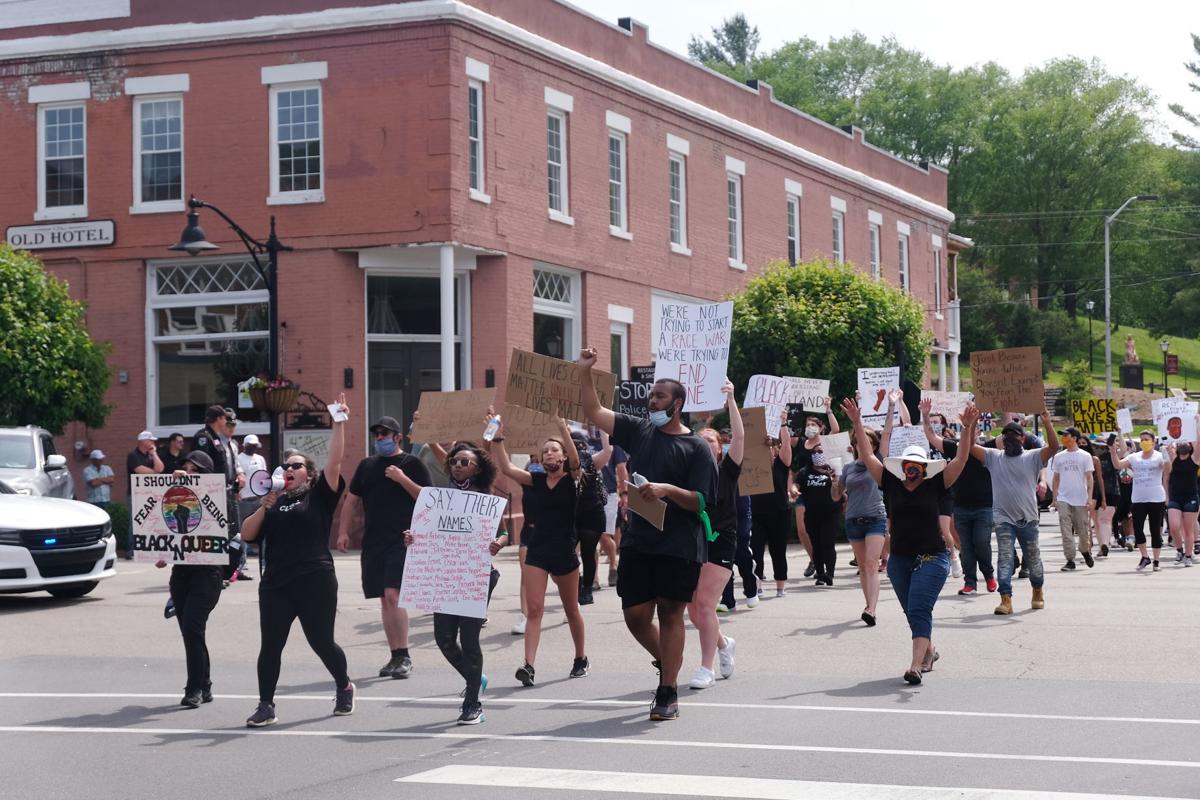 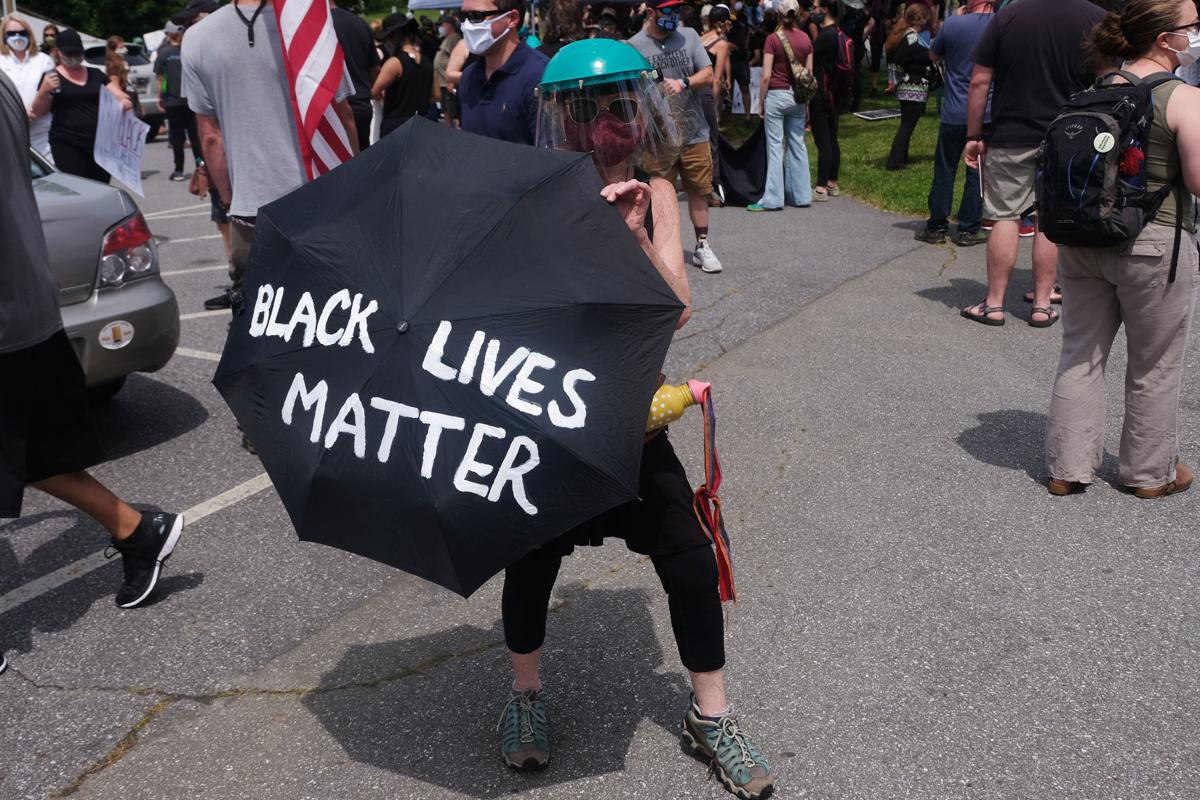 Nancy Shannon with ‘Black Lives Matter’ painted on her umbrella. 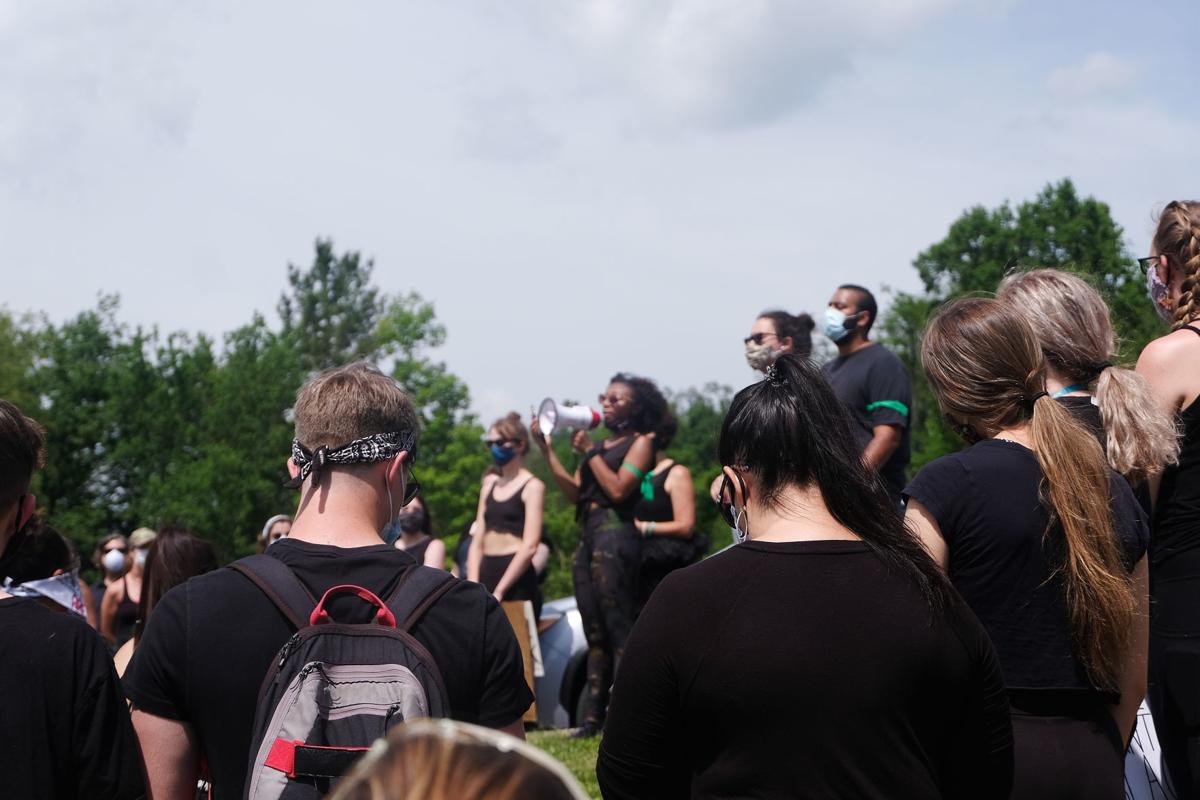 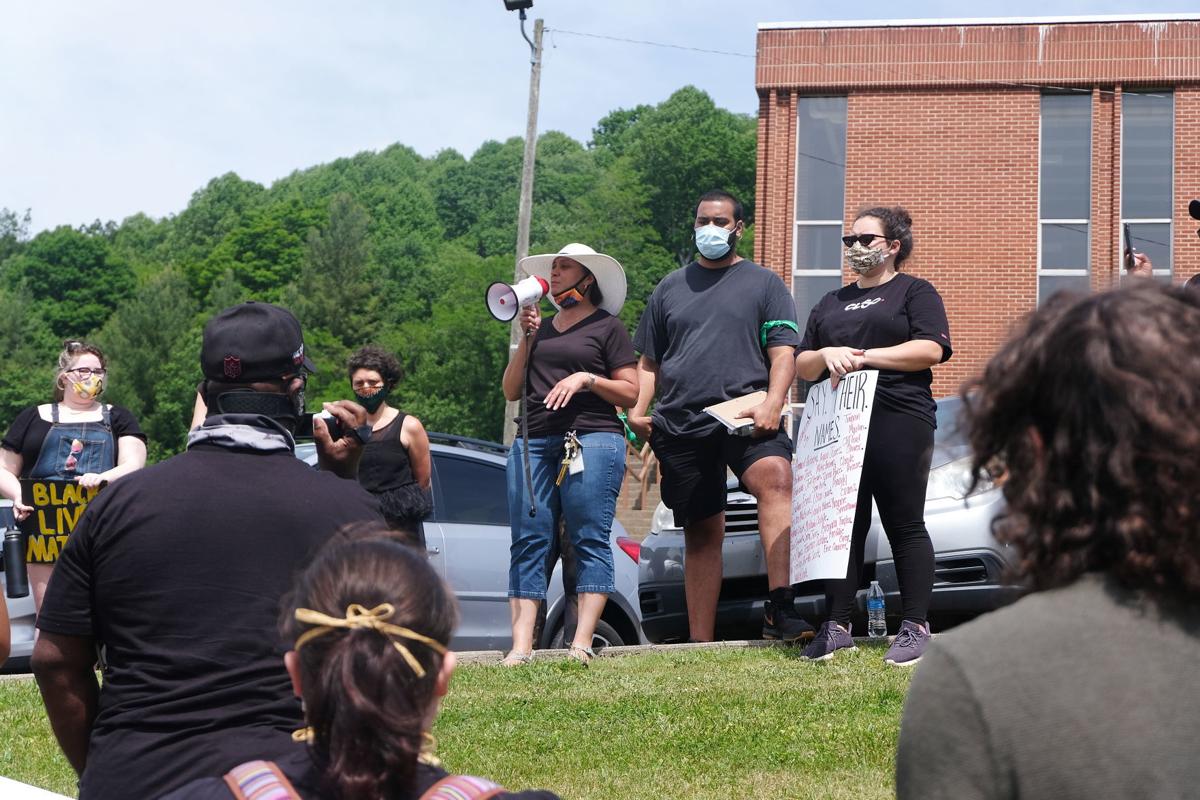 Fontrina Wray, flanked by Quentin Wellington and Olivia Shepherd, leads a prayer before the protesters marched. 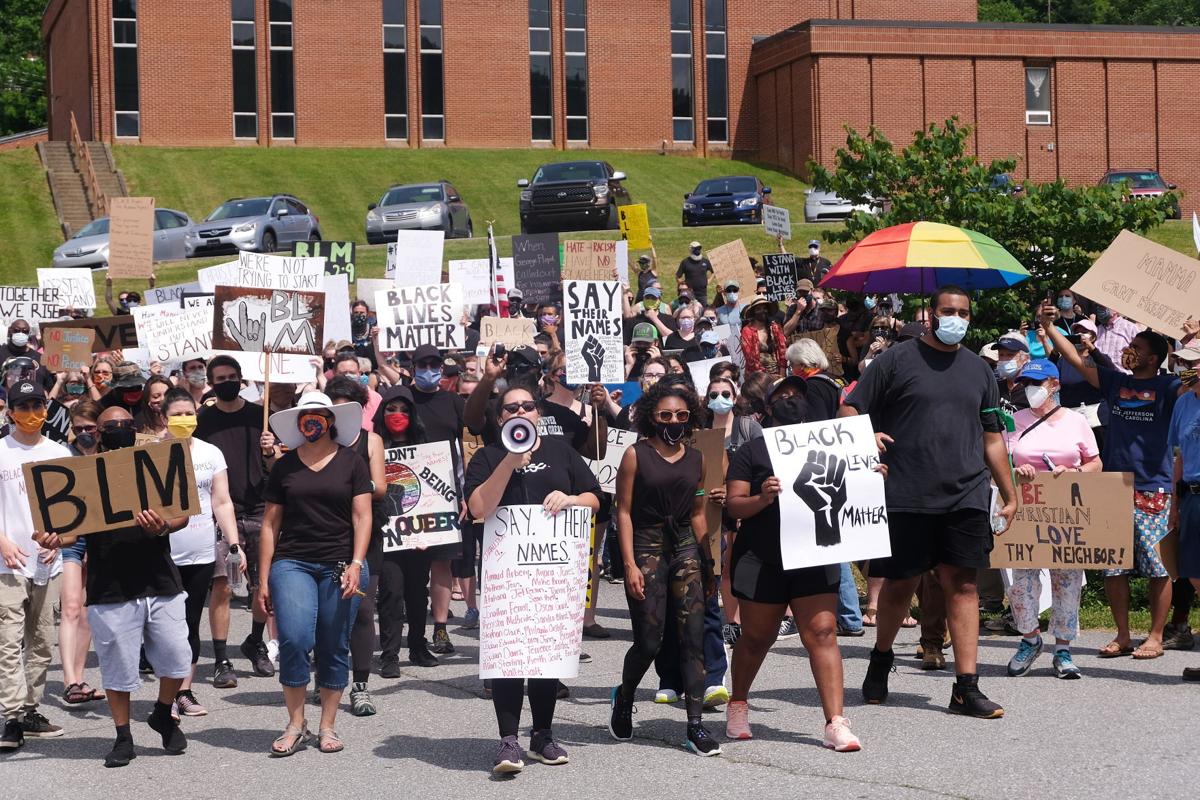 The protesters begin their march through West Jefferson Saturday, June 6. 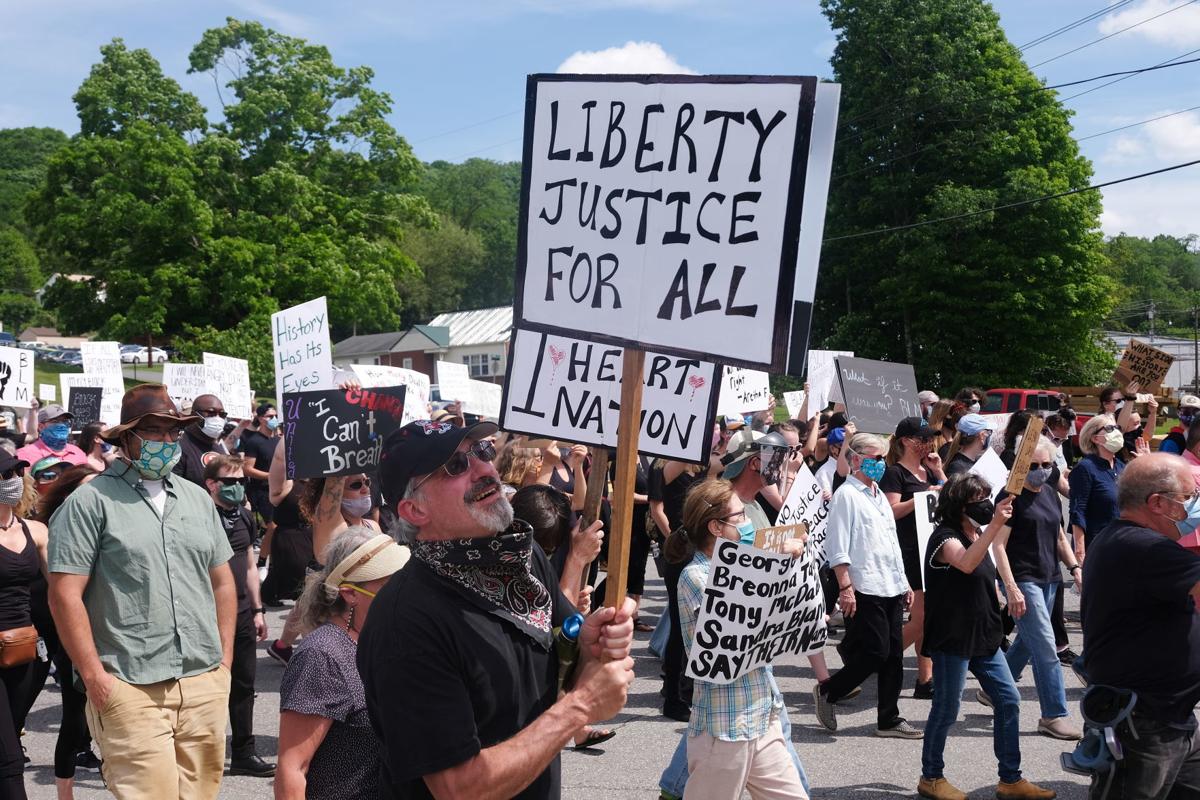 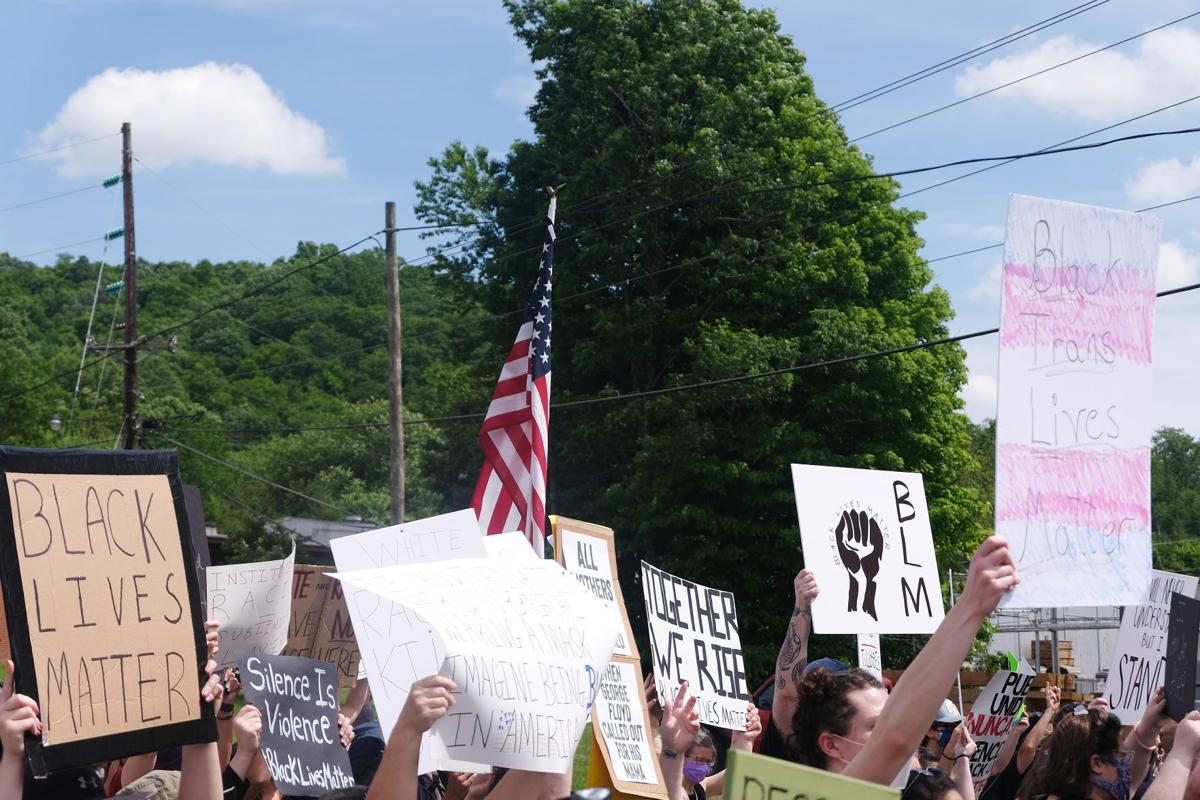 One protester carried an American flag in a sea of signs against systematic racism. 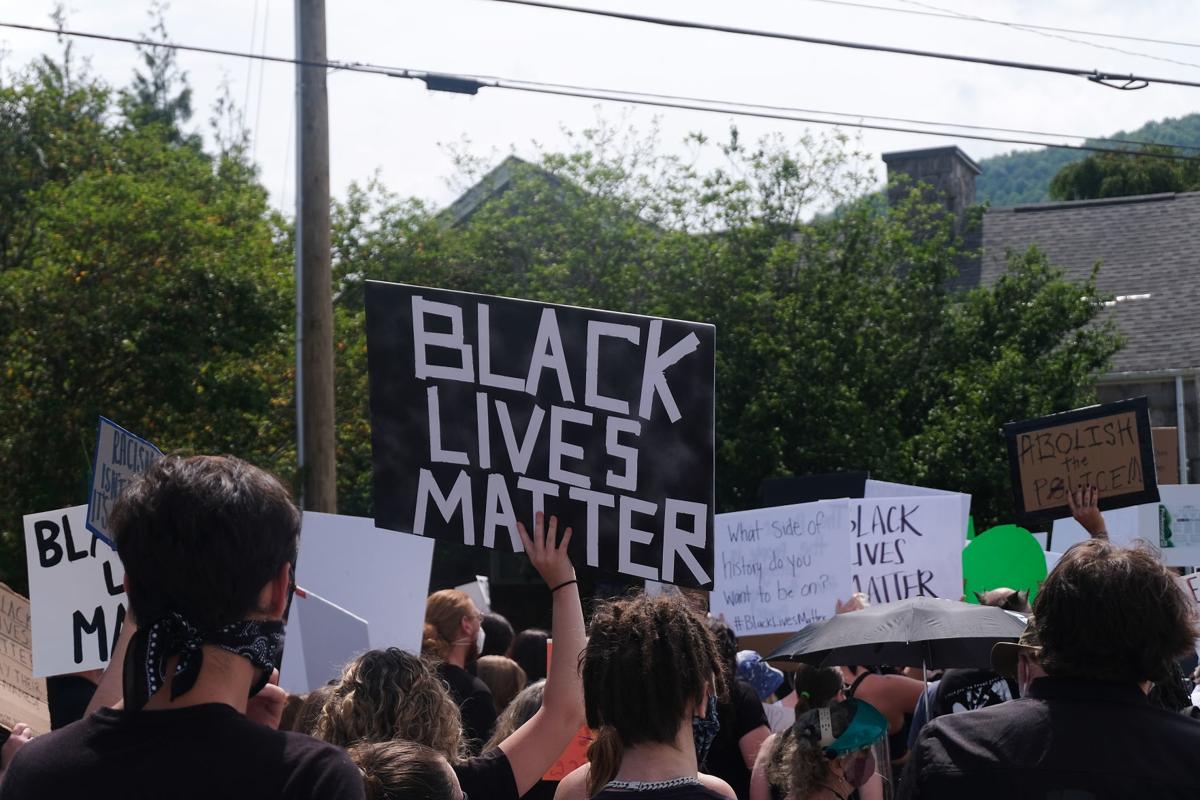 One of many signs reading, ‘Black Lives Matter’ at the protest Saturday, June 6. 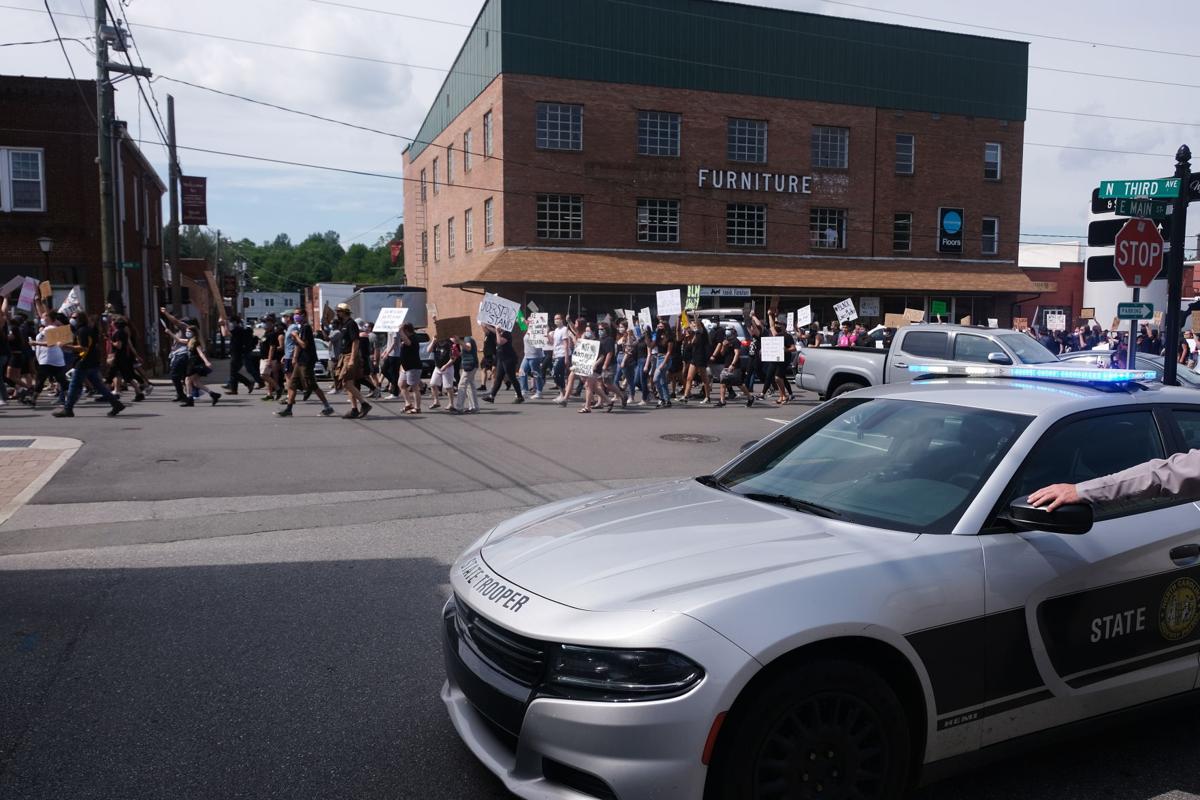 Law enforcement from around the county were on-hand to make sure the protest went peacefully and was not disturbed. 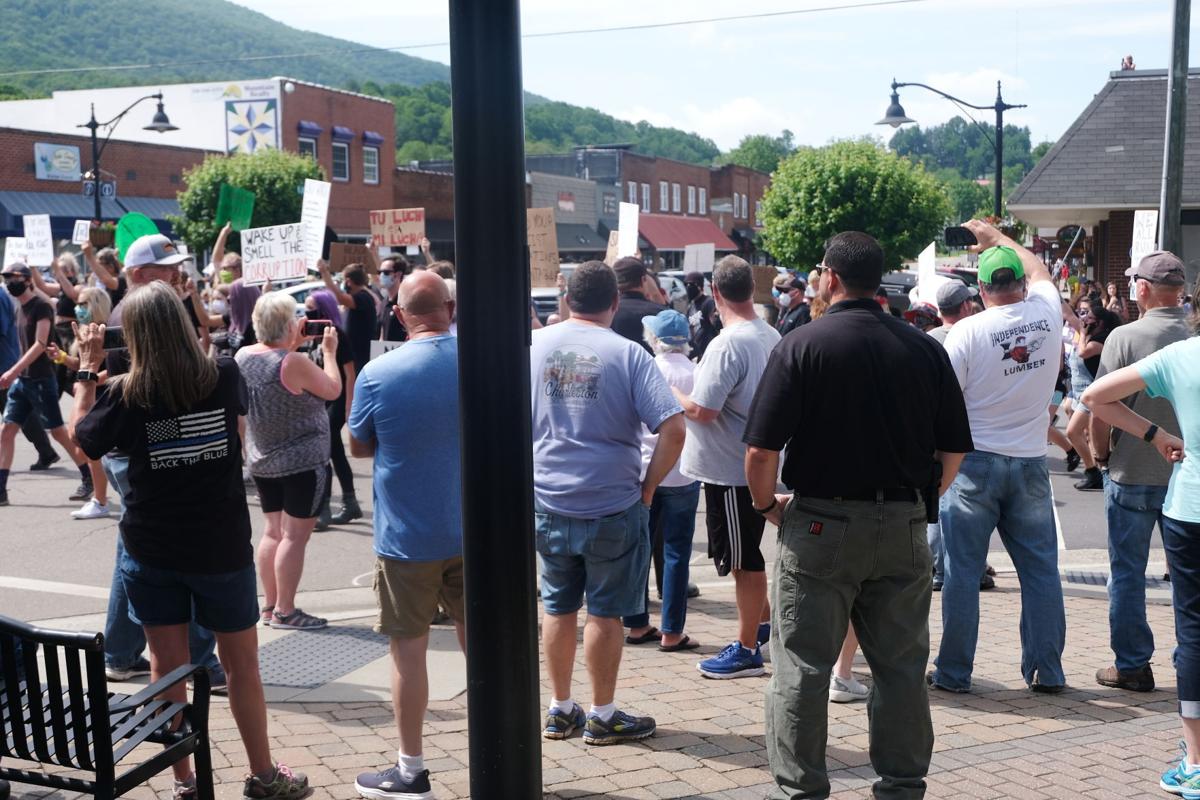 Many stopped to watch, record or take pictures of the protest from the sidewalks. 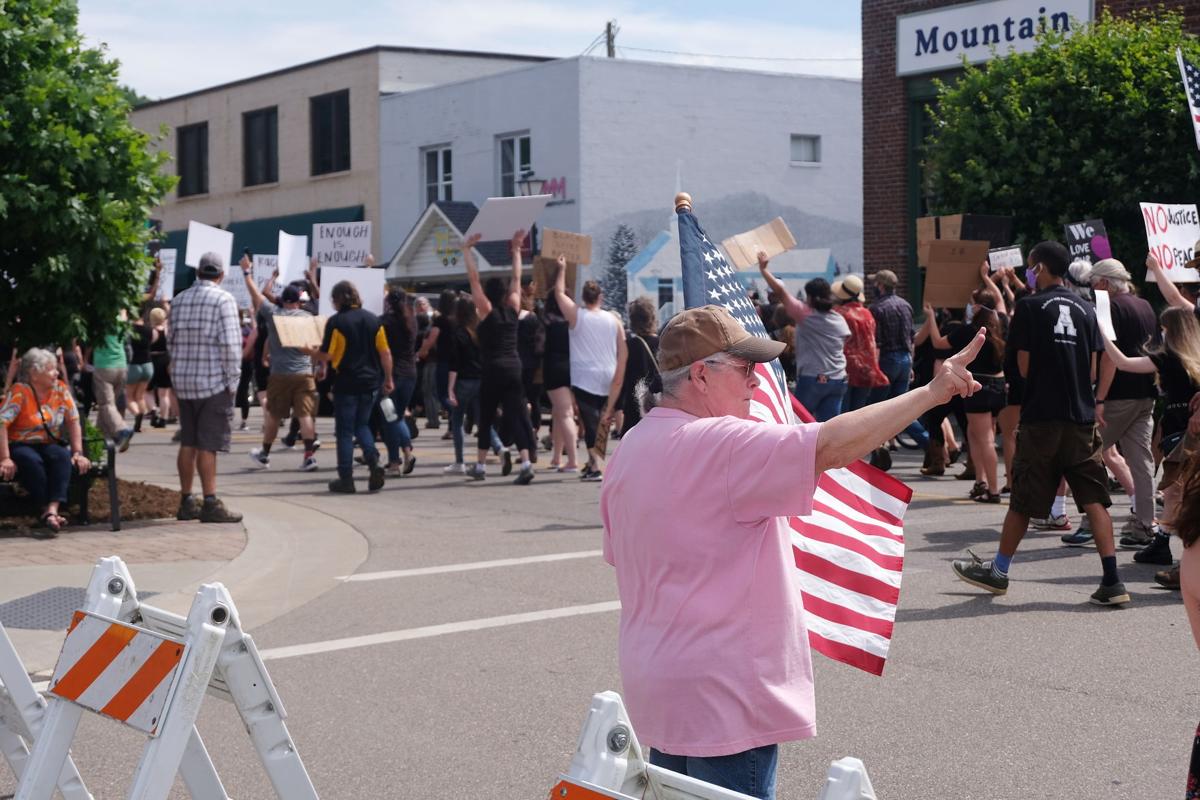 Patricia Lee held an American Flag, waved and held up the peace sign to those marching in the protest. 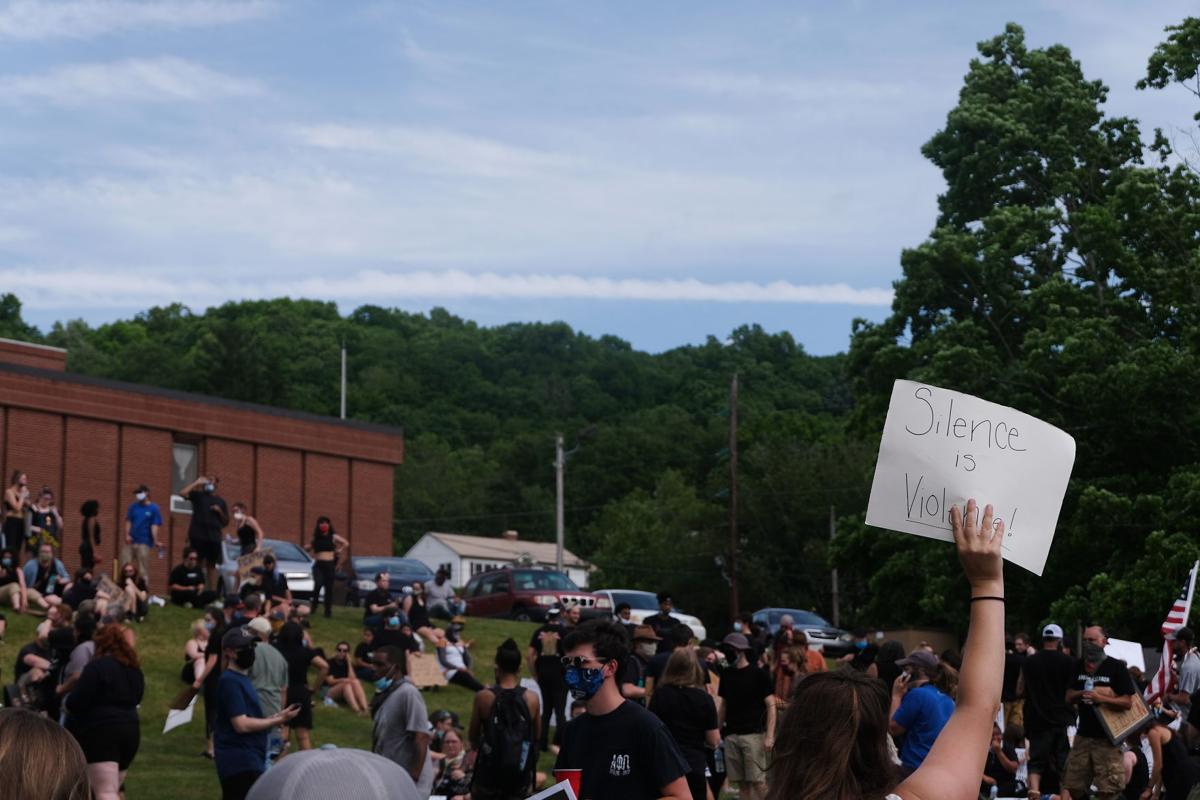 Protesters carried signs with phrases such as 'Silence is Violence' Saturday, June 6. 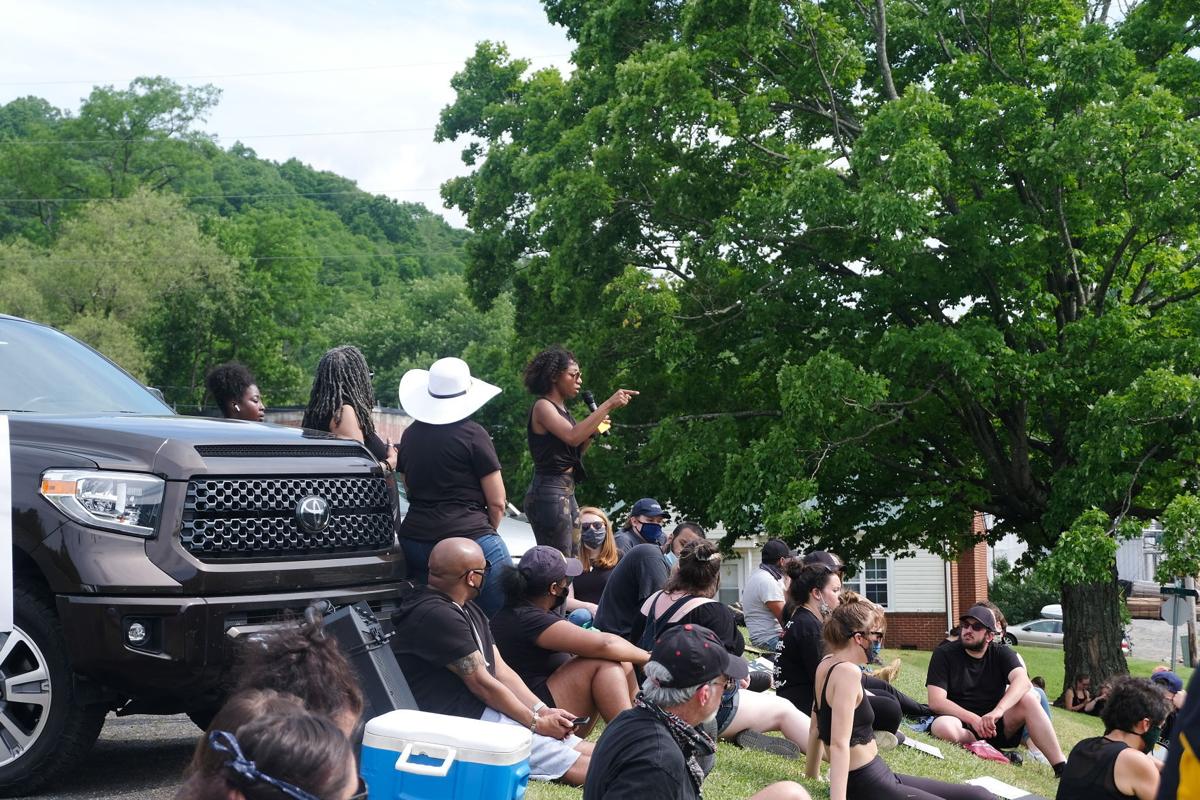 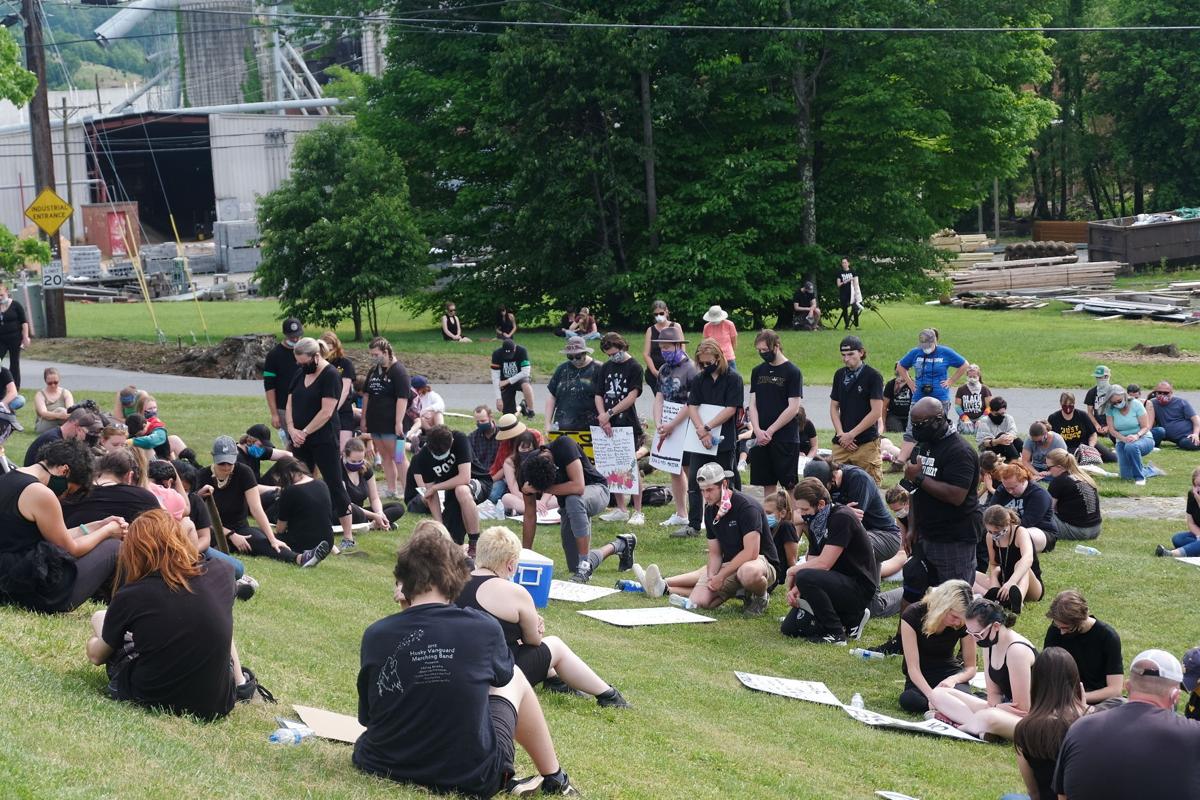 A moment of silence was held at the end of the protest. Many chose to bow their heads, while some kneeled.

Nancy Shannon with ‘Black Lives Matter’ painted on her umbrella.

Fontrina Wray, flanked by Quentin Wellington and Olivia Shepherd, leads a prayer before the protesters marched.

The protesters begin their march through West Jefferson Saturday, June 6.

One protester carried an American flag in a sea of signs against systematic racism.

One of many signs reading, ‘Black Lives Matter’ at the protest Saturday, June 6.

Law enforcement from around the county were on-hand to make sure the protest went peacefully and was not disturbed.

Many stopped to watch, record or take pictures of the protest from the sidewalks.

Patricia Lee held an American Flag, waved and held up the peace sign to those marching in the protest.

Protesters carried signs with phrases such as 'Silence is Violence' Saturday, June 6.

A moment of silence was held at the end of the protest. Many chose to bow their heads, while some kneeled.

WEST JEFFERSON — Hundreds of people congregated in West Jefferson to protest racism and police brutality on the afternoon of Saturday, June 6.

The protests are in-line with many that have been going on around the nation since the death of George Floyd Jr., who was black, after a white police officer kneeled on his neck May 25 in Minneapolis.

Law enforcement agencies including the Ashe County Sheriff’s Office, West Jefferson Police Department and North Carolina Highway Patrol were on-hand to keep the protest peaceful, and make sure it was not disturbed. WJPD Chief of Police Brad Jordan said before the protest that he believed it would go well, and stay calm.

ACSO Chief Deputy Danny Houck said he believed the protest brought together more than 300 people, and that it went well.

Ron Rognstad of Todd and Jonathan Estes of West Jefferson shared their motivation for attending this event.

Both practice the Baháʼí Faith, which they described as one God teaching one humanity in unity.

Their reasoning for being in attendance was because they felt it was necessary and felt compelled to support the organizers and the local African American community. They were there to listen, learn and support.

Michelle Handler and Paul Wetzel are both Ashe County residents who were passionate about the message “Black Lives Matter” for multiple reasons, including taking action to stop funding the militarization of police forces.

“Not being here disrespects people we love,” Handler said.

“We’re saying that if you’ve never been judged by the color of your skin, you don’t know what it’s like,” Handler added.

A few attendees donned green safety marshal armbands which were used as a measure to retain the peace. Kayana Wray said being a part of the movement is not just personal because of what happened to George Floyd, but because she has experienced being a minority in Ashe County.

After the last of the protesters made their way downtown, Sheriff B. Phil Howell commented that it went very well.

After the march, attendees gathered again on a grass hill after helping themselves to refreshments to learn more about the mission and to hear experiences and accounts of those with personal stakes in the BLM movement.

The mission of the protest, which was read aloud, is as follows: “We the people of Ashe County, North Carolina, are aware of the continuous racial injustice of Black Americans and on Saturday, June 6, the black community and allies will join together in solidarity for change in our country and change in our county.”

The demands, which were also outlined and addressed to the crowd, included justice for George Floyd, justice for Oddie Cox, harsher consequences for police officers who take innocent black lives, the implementation of antiracist practices within the Ashe County Public School system and the commitment of having a conversation around the history of African Americans in Ashe County.

Fontrina Wray shared the history of Oddie Cox who was born in 1890 and died in 1960. Cox, a black man who was a deacon at Cox’s Grove Baptist Church and attended North Carolina Agricultural and Technical college to share educational knowledge with the young black children of the High Country, died in a fire that destroyed his home.

“Mr. Oddie Cox stood for something in this community that we can all be proud of, black, white and any person of color,” Wray said. ”He stood for education, and the problem is that we have been miseducated along the way, and that’s when instances such as George Floyd happen.”

“You have to amplify, exemplify and multiply everything that you teach him so that he learns to thrive and survive in a world that counts him as something that is not valid,” Hart said. “You’ve got to do better about scaring them to death or scarring them for life.”

Some in West Jefferson Saturday came upon the protest by chance.

“We came here to get ice cream,” said Becky Miles of Wilmington, who nevertheless had a message for those attending the event. “We hear you and we know you have a right to protest, (but) now we all need to find some peace.“

David Miller of Ashe County agreed that protestors had a right to assemble, but said, “We don’t need it here. We don’t have racism here.“

Ashe County resident Shirley Dowell said, “There is no reason for it here, we don’t need it in this county.”

Miller stated that “all lives matter,” and Dowell added, “Even all the babies that never got to take a breathe.”

Jerry Fares of Ashe County, a former policeman and investigator in Florida, said that no officer would condone the circumstances and actions surrounding the death of Floyd, but that a police force is necessary.

“Law enforcement doesn’t want any type of death by such instances — even if it’s perturbed,” Fares said. “I’m a patriot. The idea of Minneapolis disbanding the police — what are they, crazy?”

Co-organizer of the protest, Quentin Wellington, shared his experience growing up as a black male in the county.

“Every black person, every woman, every man has to walk down the street thinking about how they place in society,” Wellington said.

Wellington’s parents, Jeff and Chasity Wellington, were also at the event.

Shepherd, who is biracial, shared her experiences of white people speaking in racial slurs like they do not matter and how she prays every night for the black community.

When addressing the audience, Alexis Wray spoke about how she has lived with both fear and guilt. She said she organized the protest out of fear and that nobody should ever be afraid to exercise their constitutional rights and uphold the First Amendment.

“I want to thank you all for coming out here today, but just remember that it doesn’t stop here, that when you leave from here today — you have to leave here reminding yourself that you put your face, you put your name out there,” Wray said. “I saw your face, we all saw your face, the whole county saw your face. Guess what? You have a responsibility now to be an ally.”

According to Badger, they raised $1,200 total and were continuing to receive donations. Badger said they used $278.34 toward supplies and $987.66 is left over. Plans are in order to donate the remaining funds and any additional donations to the George Floyd GoFundMe account.

Roberts read aloud a statement from N.C. Rep. Ray Russell, which addressed how the black community continues to be failed within society.

“Repeatedly and systematically ignoring the pain of the African American community is what brings us to this crisis moment,” Roberts read from the statement. “The demand should not be considered a high bar, the demand is that black people be treated with decency, fairness, honesty and as fellow human beings in this world.

Prior to dismissal, the crowd observed a moment of silence in solidarity for all the black lives that have been taken throughout the nation’s history.