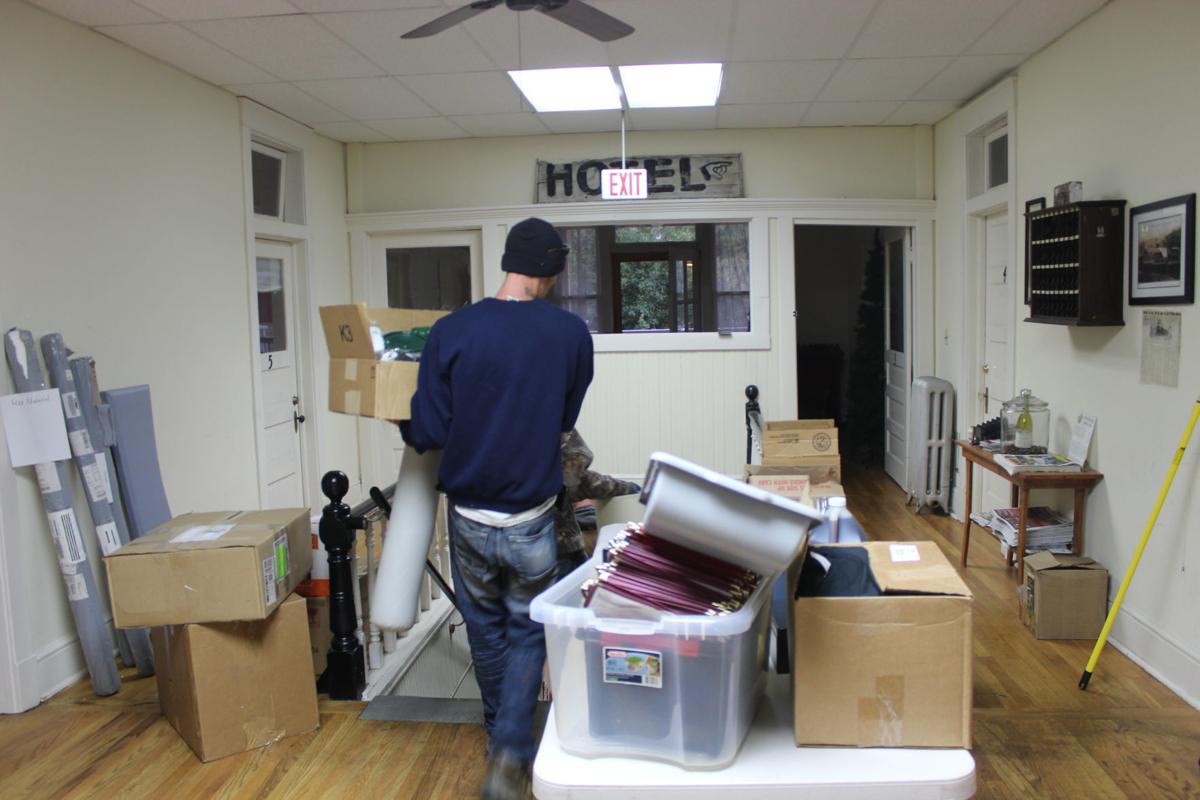 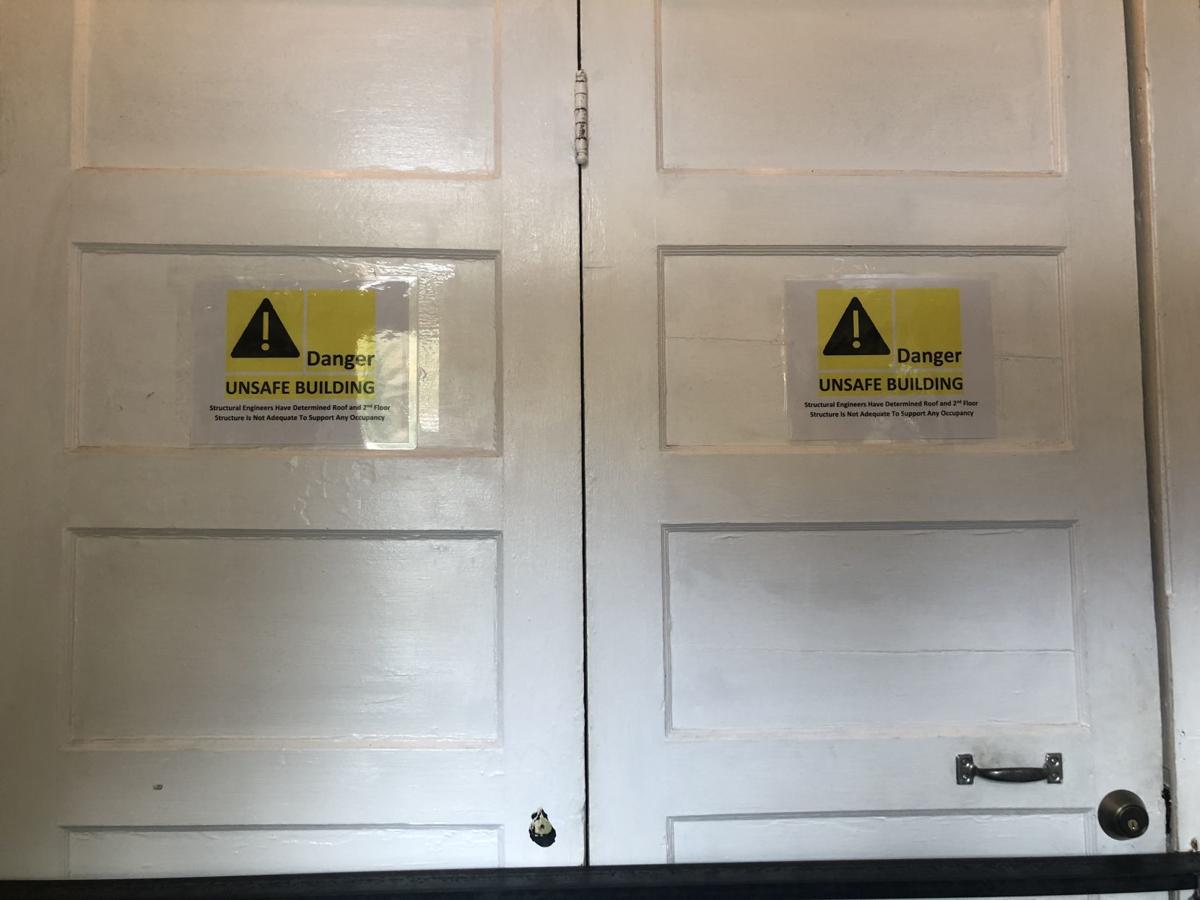 Signs were placed on the doors leading up to the second floor of the Old Hotel after tenants had moved out Monday, Oct. 21. The signs read, “Danger: Unsafe Building — Structural engineers have determined roof and second floor structure is not adequate to support any occupancy.” 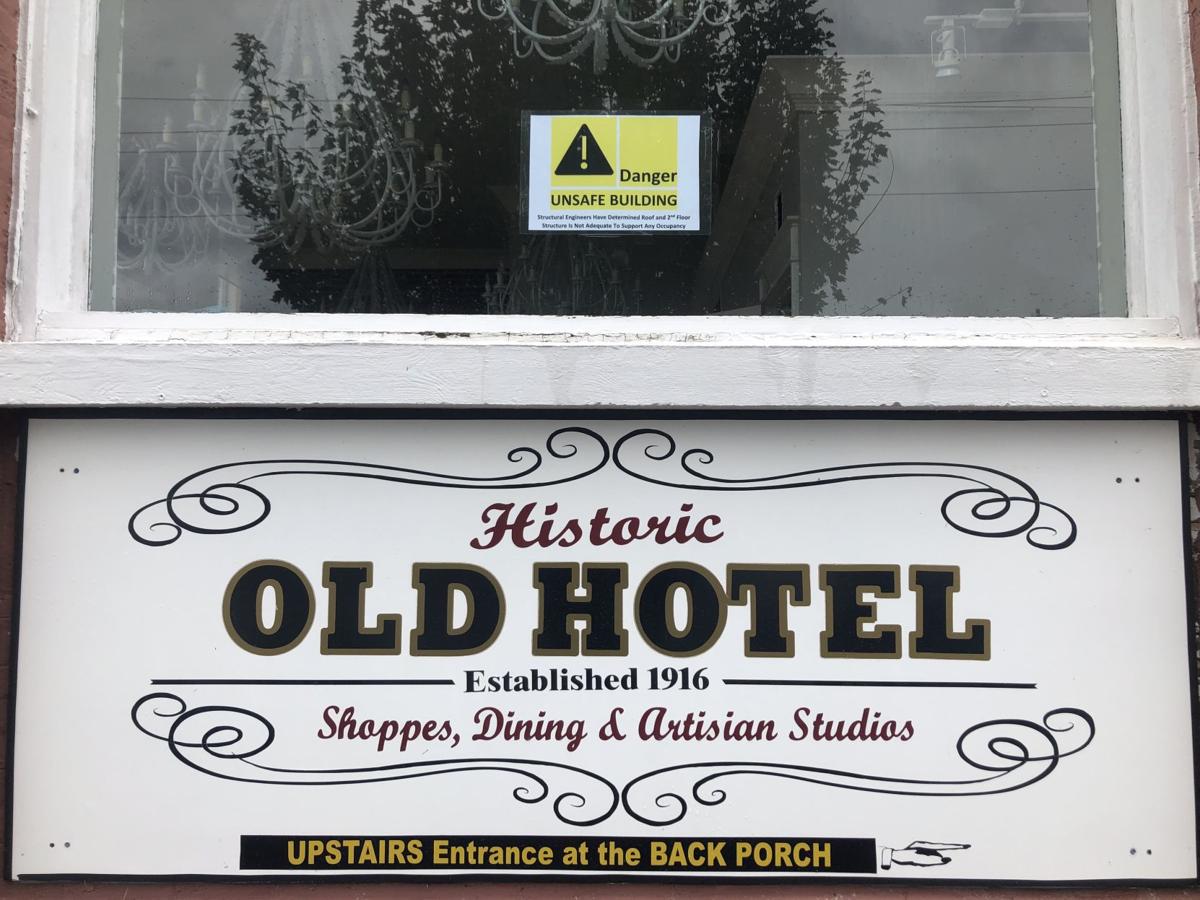 Another danger sign placed on one of the outside windows of the Old Hotel.

Signs were placed on the doors leading up to the second floor of the Old Hotel after tenants had moved out Monday, Oct. 21. The signs read, “Danger: Unsafe Building — Structural engineers have determined roof and second floor structure is not adequate to support any occupancy.”

Another danger sign placed on one of the outside windows of the Old Hotel.

This story was updated with information regarding Thrive Bodyworks' new location.

WEST JEFFERSON — After a one-week notice, tenants on the second floor of the Historic Old Hotel gathered their belongings and vacated the premises Monday, Oct. 21, upon request from owner Mark Beck, citing safety concerns.

Beck’s request came on Monday, Oct. 14, after he said he received a structural assessment of the building on Oct. 10. The report, conducted by Areté Engineers, based in Blowing Rock, on Aug. 14, stated that “the existing upper-level joists are not structurally adequate for support of the required design loads based on any occupancy.”

After receiving the assessment, Beck sent notices to the Hotel’s second-floor tenants asking that they vacate the building immediately. Tenants were then informed that a mitigation company would be arriving on Monday, Oct. 21, to move furniture and personal property.

Beck, along with the mitigation company, arrived at the Old Hotel early Monday morning to begin the moving process. A number of businesses rented office spaces on the second floor of the building, including Thrive Body Works, Lady on the Fly Antiques and The Hotel Tavern.

Remona Teague, owner of Lady on the Fly, has rented an office space on the second floor for a little more than two and a half years. She said she opened the business as a creative outlet, selling antiques and other collectibles she found around the world while traveling.

“This was really taking off,” Teague said on Oct. 18, while packing up her belongings. “So, it is just so disappointing because it was a symbiotic relationship with the Tavern.”

As customers of The Hotel Tavern would wait to be seated, Teague said they would make their way up the stairs and into her antique shop. The shop’s hours accommodated restaurantgoers’ schedules, open from 5 to 9 p.m. on Friday and Saturday, as well as Teague’s own schedule with her full-time job.

“I was doing this for fun, and the fun isn’t there anymore,” Teague said.

Among those helping with the move-out process were Andy Guion and Sherman Lyle, owners of The Hotel Tavern, who filed a lawsuit against Beck and the Hotel’s former owners on Aug. 29 alleging a breach of contract and unfair/deceptive trade practices, seeking to remain in operation. The preliminary hearing for the case was continued in court by agreement of both parties on Sept. 30, Ashe Post & Times previously reported.

Despite being able to remain in operation during litigation, The Hotel Tavern still needed to remove refrigerators and a few other items from their second-floor office space on Monday, Oct. 21. Guion said he only removed as much as needed from the office space to still be able to conduct business for a 10-day period and decrease the load on the second floor.

He added that they will be bringing in another structural engineer to conduct a second assessment of the building and hope that the county’s inspection department will get involved.

Julie Melton, owner of Thrive Bodyworks, said she was not informed of needing to vacate the building until the morning of Monday, Oct. 21. She added that she would be moving to Mountain Serenity Massage in Jefferson until she moves her studio into her home.

“It’s a great loss of money to me,” Melton said.

Beck said that tenants’ rent will be returned for the month of October. After all furniture and belongings are removed from the second floor, he said it will be locked to prevent public access, once again emphasizing a safety concern.

Ashe Post & Times will provide an update on the second structural assessment of the Historic Old Hotel once it is made available.