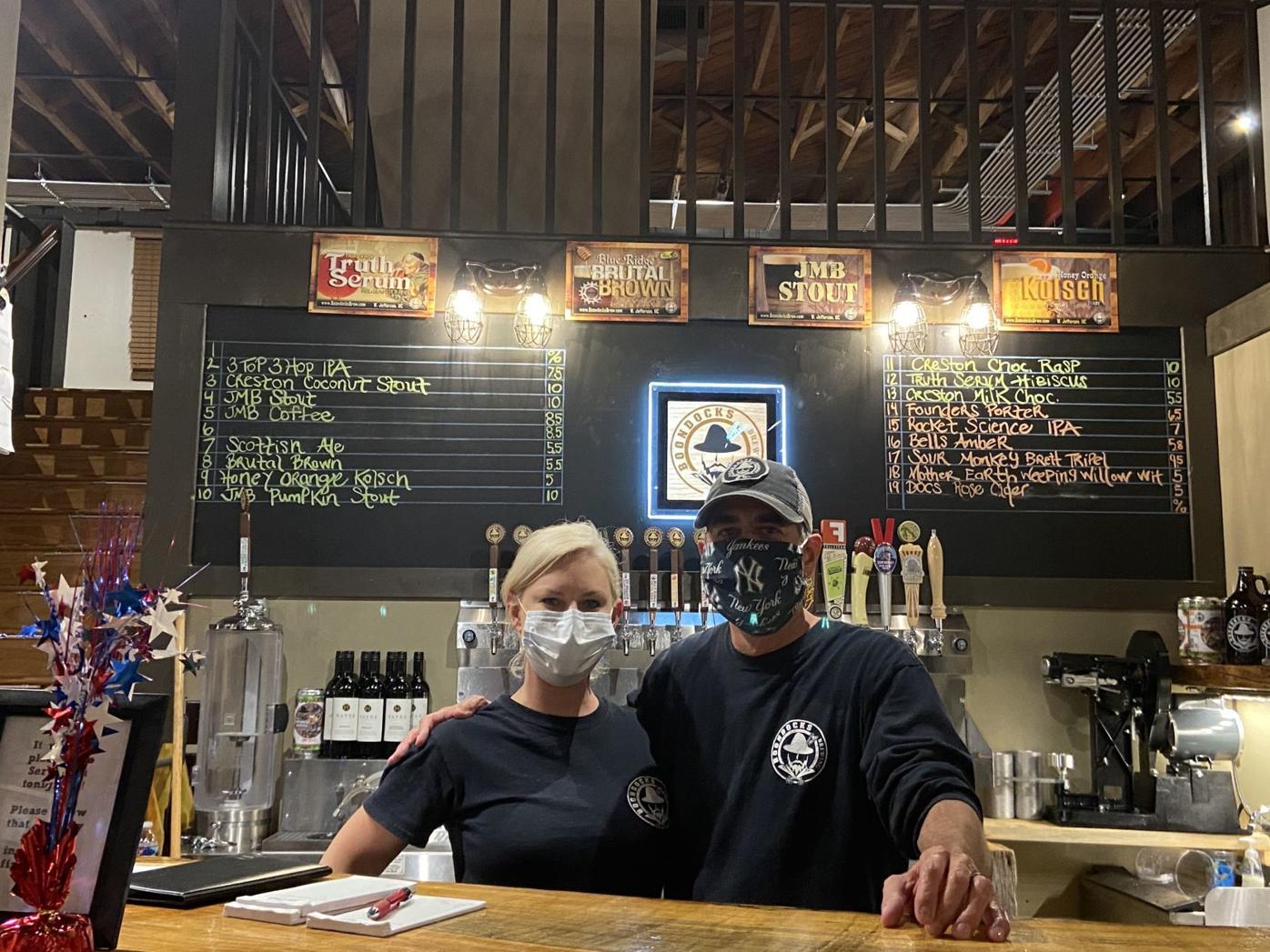 Elaine Hash and Anthony Giordano, serve customers dining in at Boondocks Brewing’s Brew Haus on May 22. Patrons were able to order from a provided food menu, which included craft and domestic beer and were provided with plenty of room for social distancing, including the Sky View Deck. 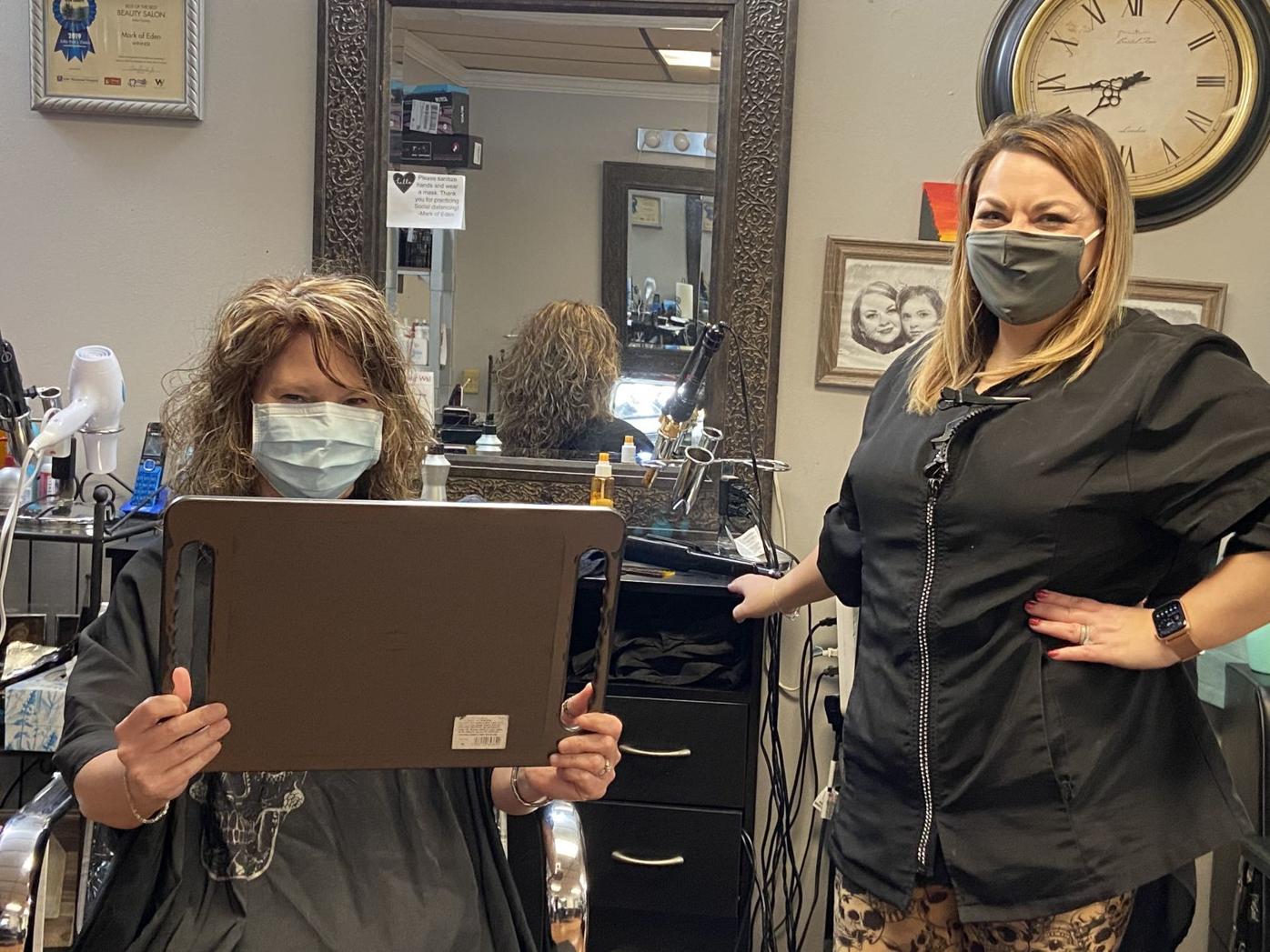 Mark of Eden, a beauty salon located in Jefferson, re-opened to serve its clientele on May 22 at 5 p.m. Pictured are owner Tera Shaw and one of her first customers of the day.

Elaine Hash and Anthony Giordano, serve customers dining in at Boondocks Brewing’s Brew Haus on May 22. Patrons were able to order from a provided food menu, which included craft and domestic beer and were provided with plenty of room for social distancing, including the Sky View Deck.

Mark of Eden, a beauty salon located in Jefferson, re-opened to serve its clientele on May 22 at 5 p.m. Pictured are owner Tera Shaw and one of her first customers of the day.

WEST JEFFERSON — At 5 p.m. on Friday, May 22, North Carolina officially entered Phase 2 of its plans to reopen the state amid the ongoing COVID-19 pandemic.

With Phase 2 in effect, many businesses across the state have been allowed to reopen their doors to customers who have patiently waited. This includes restaurants allowing dine-in options again, which has not been the case since March 17, following an executive order from Gov. Roy Cooper.

Retail businesses that were allowed to open in Phase 1 at 50 percent capacity will continue at that level. Retail businesses are encouraged to limit customers inside the store to an emergency maximum occupancy, mark six feet of spacing in lines at point of sale and in other high-traffic areas for customers, conduct daily symptom screening of workers using a standard interview questionnaire of symptoms and perform frequent and routine environmental cleaning and disinfection of high-touch areas with an EPA-approved disinfectant for SARS-CoV-2.

Child care facilities, day camps and overnight camps will be allowed to open with enhanced cleaning and screening requirements in Phase 2.

Hair salons and barber shops, which were forced to close per Cooper’s March 23 announcement, were able to re-open their doors beginning at 5 p.m. on May 22.

One salon that opened promptly at 5 p.m. was Mark of Eden, located at 203 Long Street in Jefferson.

Tera Shaw, owner of Mark of Eden, said she woke up to over 50 messages from people wanting hair appointments on the morning of May 21. Shaw said she has been re-scheduling those who already had appointments scheduled before salons had to close and has given priority to their regular customers when scheduling appointments.

At Mark of Eden, they usually have six stylists working at one time. Per the fire marshal code, they can have 15 people at max capacity, but Shaw decided to cap the number of people in the salon at once to 12 people. Shaw said she has been extra careful because any violations regarding capacity or breaking the governor’s orders would result in a fine, one of which is $10,000 from OSHA.

“I did the math on it, and we’re only going to be able to see about two-thirds of the people we normally could see at a time because of the way we are forced to schedule and not being able to take walk-ins,” Shaw said.

Shaw said in terms of accepting walk-ins, she would be concerned about capacity and also having to gather information from clients. If customers were to walk-in for a hair appointment they would have to sign in and provide extensive contact information in case an outbreak were to occur and contact tracing was necessary.

In terms of extra precautions with sanitation, it hasn’t been much of a headache for hair salons since they already sanitized all chairs, styling tools and equipment between customers prior to COVID-19.

Shaw said one of the greatest downfalls is not being able to have as many people in the salon at once, not just because of business but also because of the social aspect.

“They love to come in and have a cup of coffee and just sit and chat,” Shaw said. “It’s kind of a social hotspot at times and we can’t do that.”

During this time, Shaw said it has been difficult encouraging people to be patient and understanding. She said they are badly backlogged in terms of scheduling, which is a common problem with all salons and barber shops at this time.

One business to reopen the dining room as soon as it could was New River Brewing, located at 108 South 3rd Avenue in West Jefferson, which allowed indoor eating at exactly 5 p.m. on May 22.

According to co-owner and head brewer Adam Hershner, it was nice to have people coming through the doors and sitting down for a meal, with many having waited patiently for the doors option to come back.

“Today has been wild with staff training, policies from agencies and sanitation,” Hershner said.

Hershner said that while they have been unable to offer dine-in eating, the restaurant and tap room had been seeing good sales with take-out and packaged beer.

At the same time, the restaurant and its contemporaries are not out of the proverbial woods yet. Hershner said plans for the location’s one-year anniversary, originally scheduled for June 19, have been scuppered as they await what comes in an expected Phase 3. Hershner said they are still expecting a lot of to-go orders, and are looking forward to moving forward.

Boondocks Brew Haus located at 302 South Jefferson Avenue, first opened for takeout options on March 19. Customers are able to call in orders, order online or walk inside to place an order Wednesday-Saturday from 11:30 a.m. to 7:30 p.m.

Boondocks Brewing Tap Room & Restaurant has been closed since March 17 for both dine-in service and takeout.

Gary Brown, founder and Head Brewer at Boondocks, said they will not be opening the restaurant location until they can operate at full capacity. Brown said it would not be feasible to operate the restaurant while food prices have significantly increased due to supply chain demand.

One positive outcome of being able to open the Brew Haus during this time is that Brown has been able to rehire 13 of his employees.

Brown said he anticipates business operations to continue changing and does not foree things going back to the way they previously were.

Prior to the pandemic, Brown said only half of their business was utilizing to-go boxes and now 100 percent of their business uses these boxes. According to Brown, Boondocks made a commitment to not use styrofoam takeout boxes, but it has been costly to purchase the influx of non-styrofoam containers used for takeout services during this time.

According to Brown, going forward, the Brew Haus will be open 6 days a week.

Dan, Hope and Jordan Bare of McB’s Mercantile, located at 103 South Jefferson Avenue in West Jefferson, said business has slowed due to COVID-19, but it is beginning to pick back up.

McB’s Mercantile is a locally owned business, specializing in embroidery, screen printing, ice cream, t-shirts and sweatshirts, as well as a variety of other items.

According to the Bares, The Blue Ridge Midnight Runners cruise-in on May 16 helped bring business back to downtown West Jefferson, which is a blessing.

McB’s had closed its doors on March 30 due to the Executive Order concerning non-essential businesses by Governor Roy Cooper. The store was able to re-open on May 2.

While Phase 2 has created more options for businesses and customers, some businesses are not allowed to reopen with Phase 2 in effect. Bars, indoor fitness facilities and indoor entertainment venues such as movie theaters and bowling alleys are still to remain closed.

In an email sent out to members of Little’s Health & Fitness Wednesday, May 20, owner Martin Little said he was disappointed that gyms were not included in the Phase 2 reopening plans. Little thanked those who have continued to pay dues and allowed the business to stay afloat, adding he does not ask people to pay what they cannot. He added his intentions to write to Cooper asking to reopen on a limited basis.

“Little’s Health and Fitness Center has been my life and passion for 39 years, and without all of you there wouldn’t be a LHFC,” Little said. “You’re not just members, you’re family and I appreciate all of you more than you know.”

This story is still developing, updates to this story will be made at www.ashepostandtimes.com as more details become available.