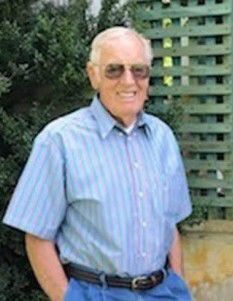 He passed away peacefully in his kitchen, exactly where he loved to be, at home. He would pass away the hours of the day by tending to his cattle, mowing his yard, sitting on the porch with his cat Sweetie, and his favorite part of the day was watching Wheel of Fortune every evening.

On Sundays, his favorite thing to do was to take his girlfriend and meet up with their friends at McDonald’s for ice cream. He was a very loving father to his daughter, and he would bring her daffodils each spring as they began to bloom beside the road where he tended the cattle. This simple act of kindness was the most meaningful thing to her. He took her to cattle sales with him many times when she was little and to feed the cows, and she would stand at the door and cry to go with him if he didn’t take her. He was always the best father in the world in her eyes.

Warren grew up in Glendale Springs, NC. He was the son of Zora Stanley Miller, and Joseph Baxter Miller. Mr. Miller had one older brother, Joseph Ralph Miller, who he enjoyed having as his brother in life. Ralph preceded him in death less than a year ago.

Warren grew up on his family’s farm where they raised cattle and pigs and chickens. He graduated from Jefferson High School, and then he enlisted into the Army where he served for two years in the Honor Guard. He was stationed in Fort Riley, Kansas, and he traveled with the Honor Guard during his time served. He was a Specialist 4 in the Army, which he was very proud to share stories about. He enjoyed his days in the Army, and he always spoke of the friends he made in the time he spent there. He later worked hanging sheetrock with his brother, Ralph, for several years of his life, and he sheetrocked many houses in Ashe County.

He gave up sheetrock to pursue his true passion which was the cattle farm. He became an Angus Cattleman, and he won Bull of the Year for the state of NC at one point in his life’s work as a farmer. He was very knowledgeable regarding cattle, and he loved going to cattle sales with friends. He worked every day from morning to night (right after breakfast and coffee at McDonald’s with his buddies) for so many years, and only in the last few years did he slow down at all. He loved to be out on the farm, whether it be feeding and salting cattle, mowing hay, putting up hay, building fence, or just cutting briars. If he would have had the choice to go on a trip somewhere to a new place or stay home and tend to the cattle and maybe cut briars and tidy up the farm, he would gladly choose the cattle and the briars! He took such pride in his farm and his cattle. He just loved to be close to home and the farm and his family.

During his farming years, he served as Soil and Water Conservation Supervisor for Ashe County, NC. He took great pride in this post, and he would attend the meetings with his wife and daughter for years around the district. Mr. Miller was humble and kind, and he never met a stranger. He loved making friends, and he never forgot anyone it seemed. Many have said that he always had a smile for everyone, and he did.

He was married to Shirley Blevins Miller in Lansing, NC, in 1974, and they resided in Jefferson most of their 37 years of marriage. She preceded him in death in 2012.

He is survived by his daughter, Amy Miller Blevins and husband John of Jefferson. Two grandchildren, Cade Blevins and Mia Blevins also survive. He was most proud of his grandchildren. He loved being their grandfather and was quick to talk about them to anyone who asked, always carrying pictures in his wallet to show others. He is also survived by his Sweetheart, Eileen Boling, and they were together for 3 years before he passed. They were a special blessing to each other, both having survived the death of their spouses. He is survived by his sister in laws, Linda Blevins Keys of Kodak, TN and her husband Jim Keys, Anita C. Miller of West Jefferson (widow of Ralph), his uncle Bobby Stanley of Jefferson, 2 nieces Nancy Miller Caldwell of Kingsport, TN and Kara-Lynda Keys of Kodak, TN., and two nephews, Jahn Graham of Jefferson, and Jeremy Graham of Lansing. Mr. Miller was also survived by cousins from both sides of his family which were very dear to him.

In his last several years, he came to know the Lord as his savior and professed his faith in Jesus. He enjoyed going to his church at Emmanuel Baptist Church in Fleetwood, NC for the last few years. He said to his daughter recently before his death, “I think I have about run my race.” Indeed he knew in his heart that he would soon leave his home and family to be with those gone before him. He will be missed here on Earth by all those who held him dear in their hearts. “To be absent with the body is to be present with the Lord” was very comforting to him, and he took this to heart in his last few years.

Mr. Miller will lie in state from 9 a.m. until 12 p.m. on Friday, September 11, 2020 at Badger Funeral Home. Due to the pandemic, the family will not be present to receive friends, but would like everyone to have an opportunity to view him and pay their respects as they wish.

A graveside service will be held that same afternoon for Mr. Miller at 2 p.m. at Ashelawn Memorial Gardens where he will be laid to rest.

The family respectfully asks for no food or flowers, because the years of love and friendship of all of his friends and family have been more than enough to give. The family wants you all to know that we wish that we could receive you in a traditional line and viewing, but due to the pandemic, we want to protect everyone- family, friends, and funeral home staff, as much as possible while still honoring the life of Warren.

Memorials may be made to: The Claude Mash Cemetery Fund in care of Kenneth Mash; 620 Claude Mash Road, Jefferson, NC 28640 which is the final resting place of most of his ancestors.

Online condolences may be sent and viewed at www.badgerfuneralhome.com.