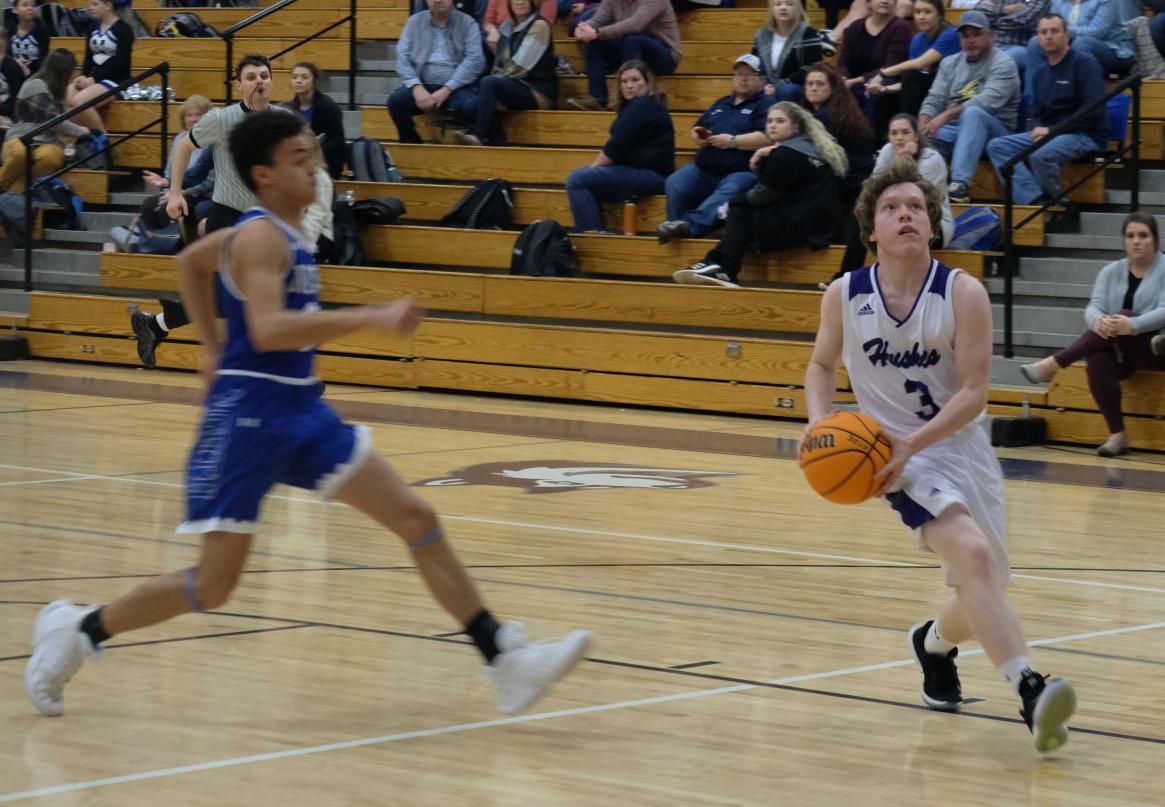 Preston Eller (3) goes to the basket on a fastbreak score against North Wilkes Jan. 3. 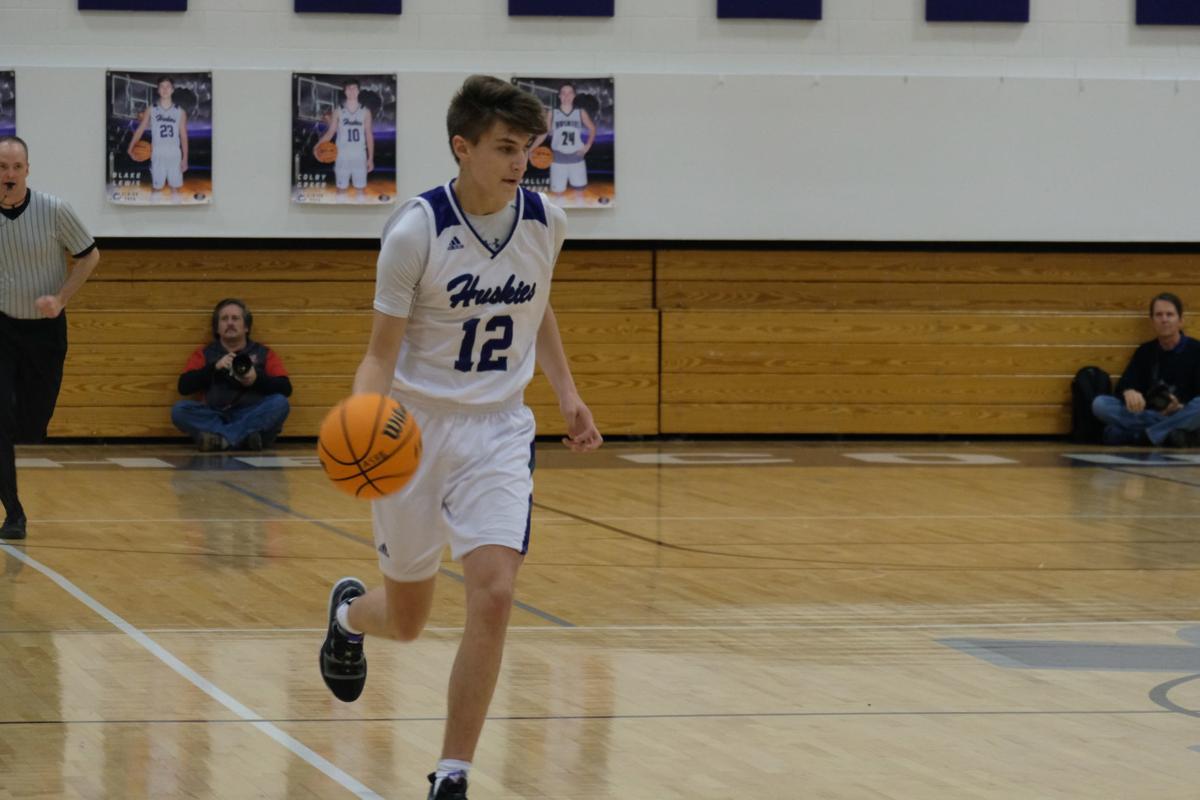 An off shooting night kept Dawson Cox (12) quiet for most of the game against North Wilkes Jan. 3. 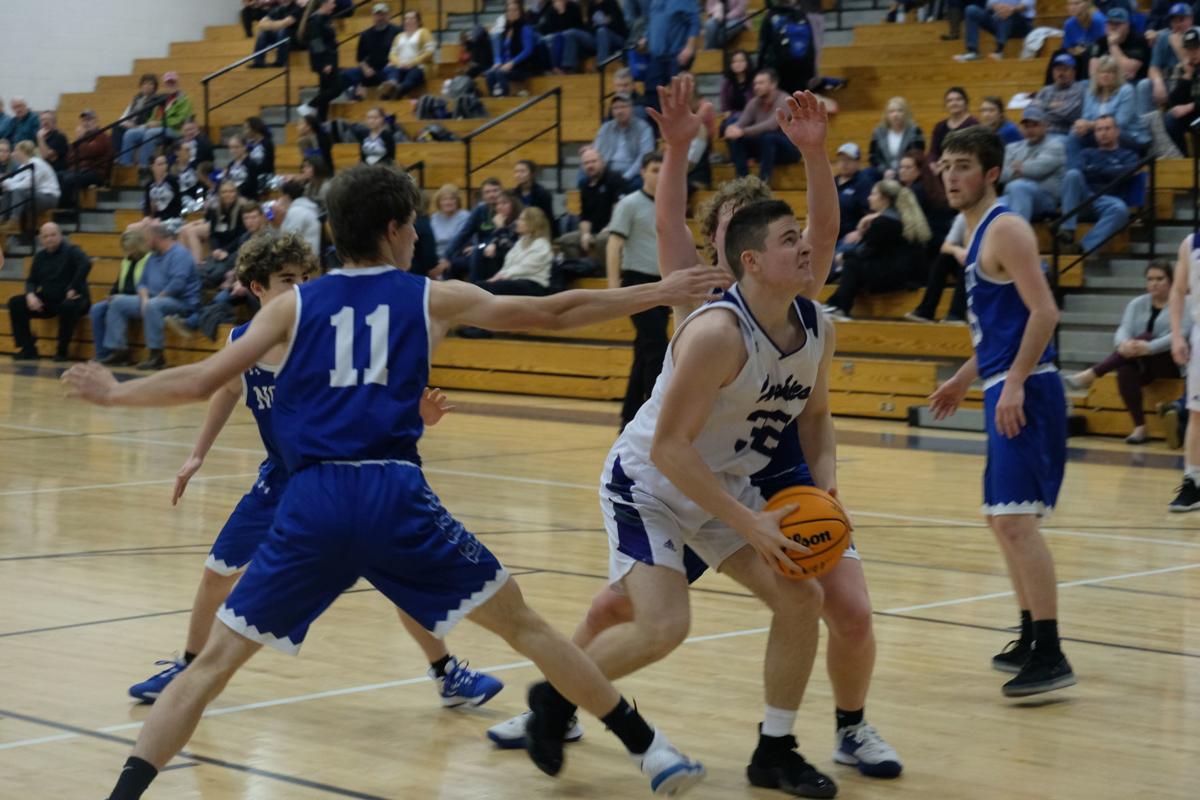 Ethan Ashley (32) fights through defenders under the basket against North Wilkes Jan. 3.

Preston Eller (3) goes to the basket on a fastbreak score against North Wilkes Jan. 3.

An off shooting night kept Dawson Cox (12) quiet for most of the game against North Wilkes Jan. 3.

Ethan Ashley (32) fights through defenders under the basket against North Wilkes Jan. 3.

WEST JEFFERSON — Sometimes, it takes a bit of extra time to grab a win, and the Huskies boys basketball team got the overtime win against the North Wilkes Vikings Friday, Jan. 3 at home.

The Huskies went into the game on a two-game skid, and were hoping for their first win since Christmas.

Ashe put the pedal to the floor early, scoring bucket after bucket to grab an early lead. Seniors Nate Lee and Colby Greer led the Huskies’ scoring for the day, as they rushed out to a 16-11 lead at the end of the first quarter.

The Huskies slowed to a crawl in the second quarter, only managing two points in the second quarter. Meanwhile, the Vikings’ offense stayed in rhythm, with only Ashe’s early lead keeping the game within reach. After a last second score from North Wilkes, they led 24-18 at the half.

Head coach Nathan Colvard lamented the team’s poor second quarter, and the general play of the team for a good portion of the game.

After the half, Ashe came out swinging, forcing their way back into contention for the lead. With Greer picking up speed and terrorizing on both sides of the ball, the Huskies managed to keep the Vikings’ lead at six heading into the fourth.

While the Huskies struggled with turnovers killing their momentum, they were aggressive enough on defense to offset the lost possessions. With just over two minutes left, Lee got the easy steal and layup to tie the game at 39. The Vikings responded with a two of their own, but Lee sunk two free throws with 30 seconds left to tie it up at 41 and send the game into overtime.

With the momentum at their back, the Huskies fought against the Vikings for the duration of the three-minute fifth quarter. Lee made the play of the night with a floater for a 47-45 lead with only one second on the clock. The Vikings’ hopes came down to a final inbounds play, but the pass was picked off by Austin Poe, clinching the win.

“I was just really pleased with our mental toughness. We got outplayed for so long and we never hung our heads,” Colvard said.

The Huskies’ next game was scheduled for Tuesday, Jan. 7 against East Wilkes (3-8), but the game was postponed to Monday, Jan. 20 due to inclement weather. Ashe’s next matchup is now a rematch against Watauga (4-6) Jan. 8.

Sorry, there are no recent results for popular images.