Kenadie Hudler, along with family, friends and coaches, signs for Pfeiffer University to play basketball. 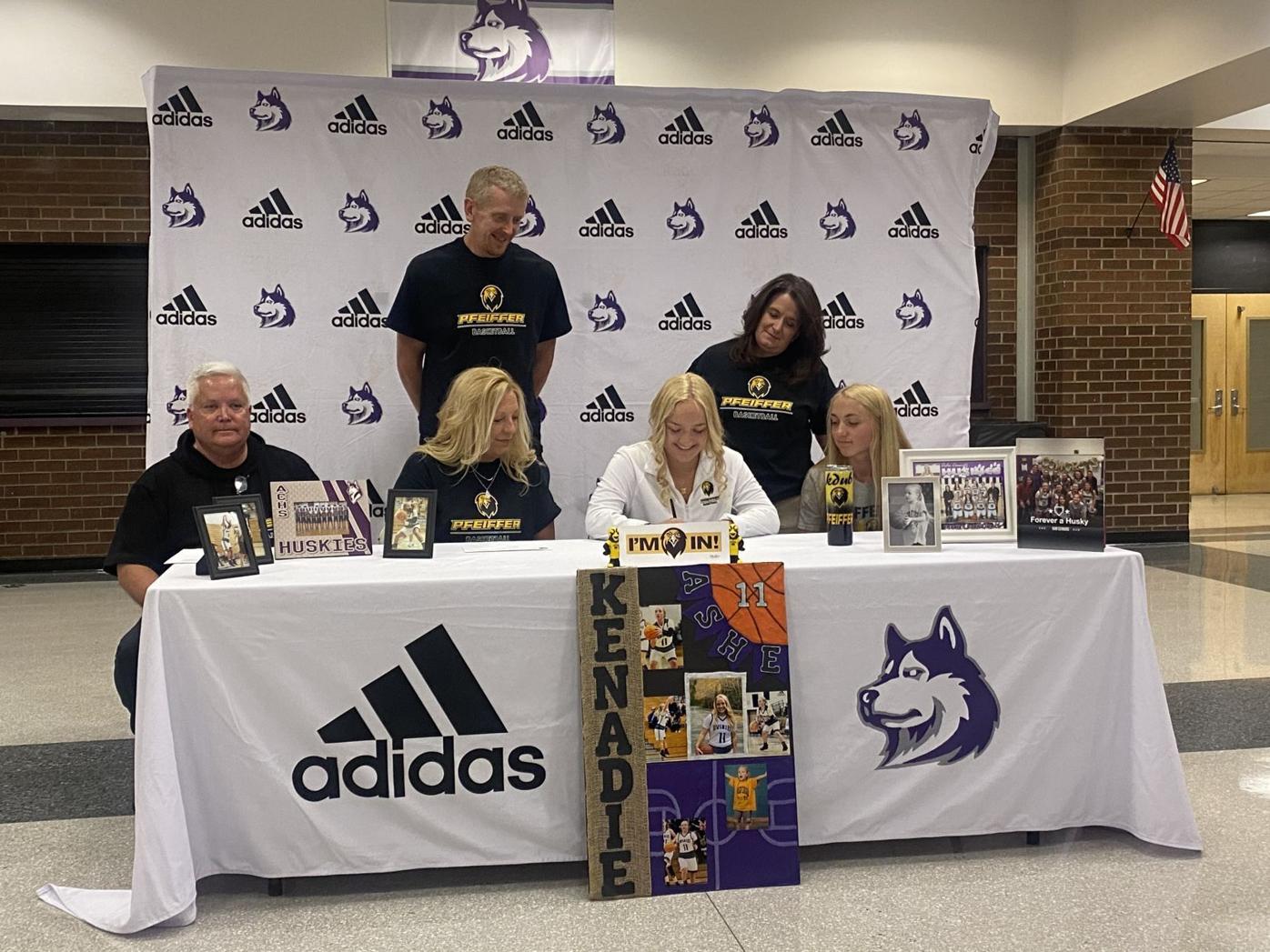 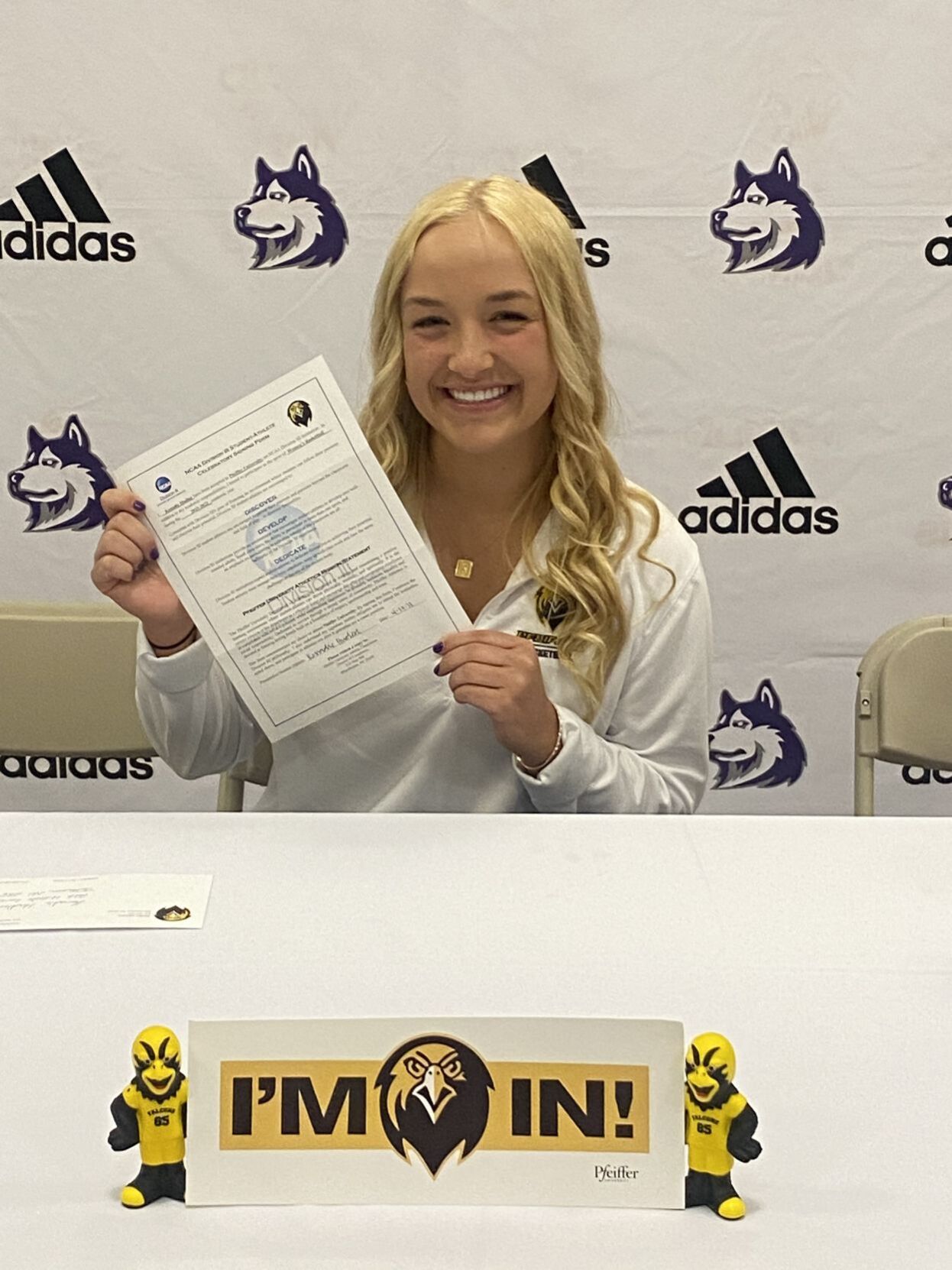 Kenadie Hudler proudly presents her signed document as she becomes a Falcon at Pfeiffer University.

Kenadie Hudler, along with family, friends and coaches, signs for Pfeiffer University to play basketball.

Kenadie Hudler proudly presents her signed document as she becomes a Falcon at Pfeiffer University.

WEST JEFFERSON — On April 17, Kenadie Hudler, along with coaches, family and friends, signed for Pfeiffer University, a private university in Misenheimer.

At a young age, Hudler fell in love with basketball, telling her father in sixth grade that she dreamed of playing Varsity basketball as a high school freshman. Rather than dismissing her desire as a passing fancy, her father replied that if she truly wanted to do that, it was going to take a lot of hard work and dedication.

Hudler worked hard and stayed focused on her goal. Her parents, David and Tanya Hudler, have supported her by driving her across the state for basketball camps and travel teams, always seeking the best coaching and the best competition. Hudler said it was often a grueling schedule where she had to learn to juggle basketball with school, church and family.

During one period of time, Hudler’s travel basketball team played 33 games in 23 days across four states. Hudler never complained and continued to practice, work hard and as a freshman, she achieved her goal of playing varsity basketball.

During an illustrious career at ACHS, Hudler maintained a 3.9 unweighted GPA and earned many prestigious awards including being a two-time All-Conference selection, a 2019 Heart of the Husky award recipient and a three time NCHSAA Scholar Athlete Individual Award Winner. In addition with her Lady Phoenix travel team, Hudler won a 16u AAU State Championship and in 2019, a National Championship in the UAA 16u Rise Division.

As a member of the Falcons Basketball team, Hudler will work towards attaining a Nursing Degree.

“I would like to thank God first for allowing me to have the athletic ability to continue my basketball playing,” said Hudler. “He is the reason I succeed in everything I do. He has given me the best parents in the world and an amazing family who have always been my biggest fans. My family and friends have always supported me and I thank God for them all. I have been raised to know that God is No. 1 and that the only thing I have complete control over is my attitude and my effort. I can never thank God enough for all he has provided me with. Thank you to my mom and dad, my little sister, Kirklyn, my friends and to all my family for being there for me. I love you all very much and I thank you for all you do.”

Her coaches also commented on her success.

“I have had the privilege of knowing Kenadie since she was born,” said coach Bobby Hudler. “For most of her life, I have been ‘Uncle Bobby.’ Throughout the years, I have seen Kendaie work hard to develop her game; from learning to dribble to becoming an all around complete player. I have witnessed the years of practice and the hours she has put in to improve herself as a player.”

Hudler then said he was honored to have been her coach.

“Before her freshman year, I had the honor of becoming coach Hudler as her hard work had paid off and she made the varsity team as a freshman. I remember coaching her one year when our team had made it to the state playoffs. We had some players hurt and Kendaie stepped up and had one of the best games of her freshman year. She knew her role in that moment and stepped up to the challenge that was given to her.

“I know Pfieffer is getting a great team player and an even better young lady. I am proud to have been her coach and uncle. I can’t wait to see all the great things she will accomplish as a Falcon.”

Former ACHS Varsity coach Laura Foster said that even though she didn’t work with Hudler throughout high school, she knows her work will pay off as she enters college.

“I didn’t have the opportunity to coach Kenadie during her high school career, but I did have plenty of opportunities to watch her play in her middle school years,” said Foster. “During that time, I was impressed with Kenadie’s work ethic, attitude and competitiveness, which I feel confident are some of the same qualities that Coach Loy recognized. There is no doubt in my mind that Kenadie will continue to develop as a player and a person. She will be an asset to her new team. I firmly believe that good things happen to people who work hard and this opportunity being offered to Kenadie is a great example of that.”

Coaches from other schools and her travel team have also commented on Hudler’s success, wishing her the best.

“Kenadie is a total package player,” said coach Allie Greene from West Wilkes High School. “As an opposing coach we had to worry about her as an offensive threat from behind the line and her ability to handle the ball and dish. She was lights out from the three and defensively we always had to know where she was. Kenadie was a great defender as well with her quickness and anticipation ability. She is a hard worker and will do great at the next level.

“Kenadie has a great attitude and is a wonderful young lady off the court as well. Pfeiffer is gaining a great basketball player and an even better person.”

“Kenadie has been a great pleasure to work with,” said Rudd. “ Her attitude is a great asset and she loves to be coached. She enjoys the work that goes into being a college level player. We are so proud of her and all she has become as a player and person. Great signing got Pfeiffer!”

Throughout her high school career, Hudler was coached by Brianna Ashley, who wishes her all the best in the upcoming college season.

“Kenadie is the type of player every coach wants on their team,” said Ashley. “As our point guard, she has been the leader on and off the court. Coaches count on the point guard to be an extension of the coach on the floor and Kenadie has excelled in that role. As proud as I am of Kenadie for her basketball accomplishments, I am even more proud of the role model she has been to our younger players. Kenadie takes these young girls under her wing and has really been a big sister and mentor to them. Pfeiffer is not only getting a hardworking and talented basketball player, they are also getting someone who will be the ultimate teammate. Our Ashe Lady Huskies program has been blessed to have Kenadie these last four years and we are excited to watch her excel at the next level.”