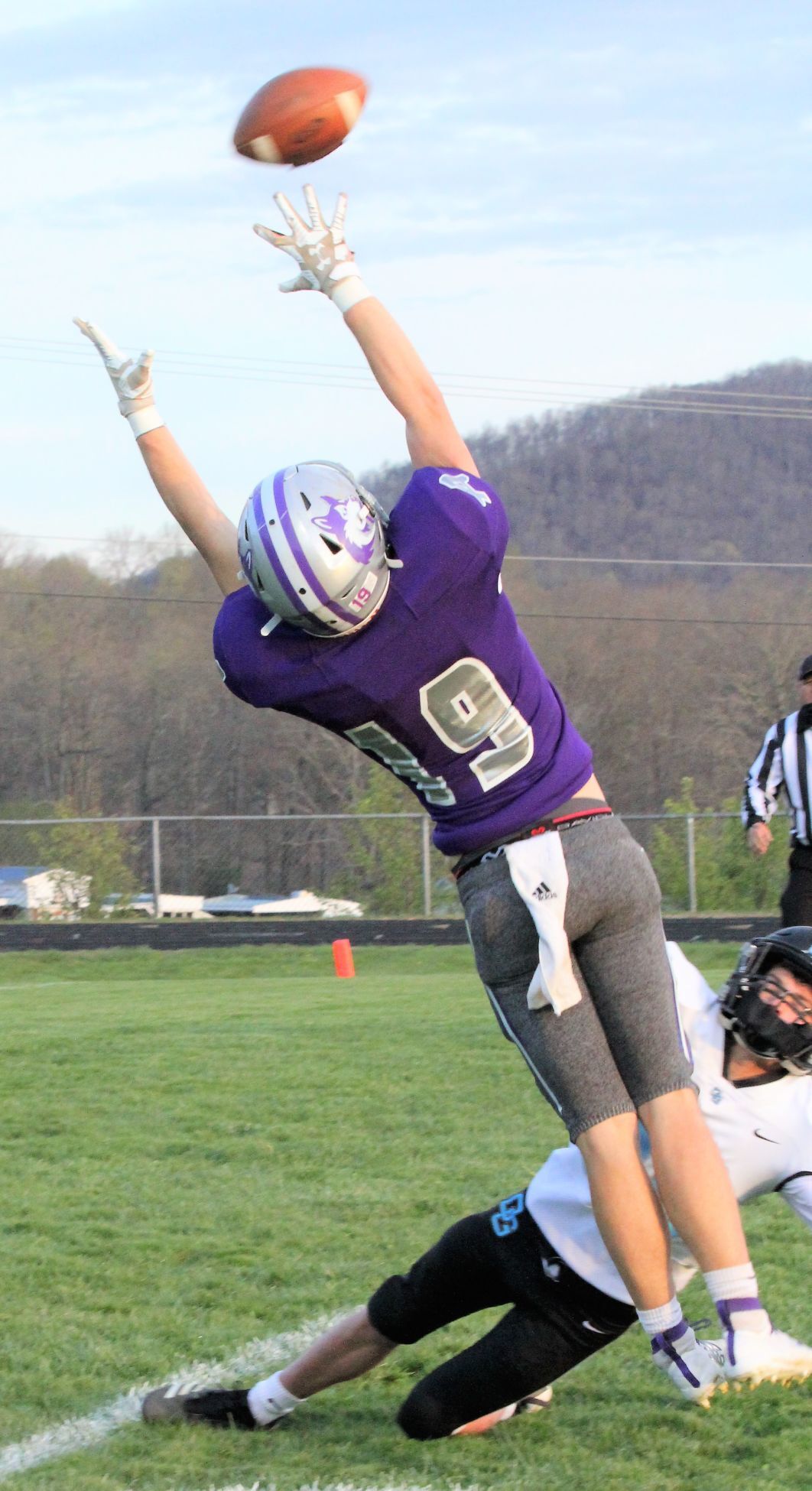 Keenan Witherspoon lunges for a pass from Dawson Cox, just out of reach. 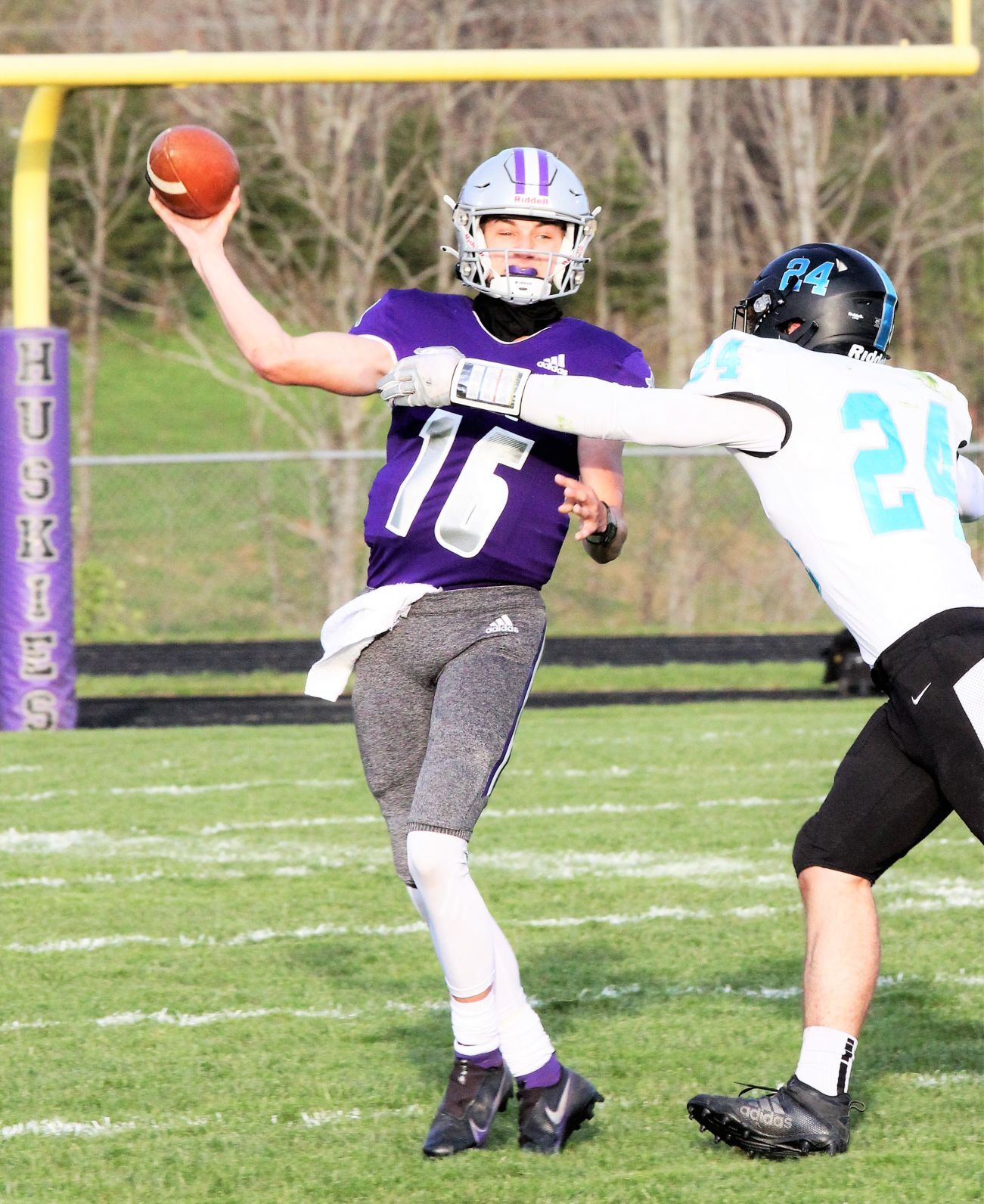 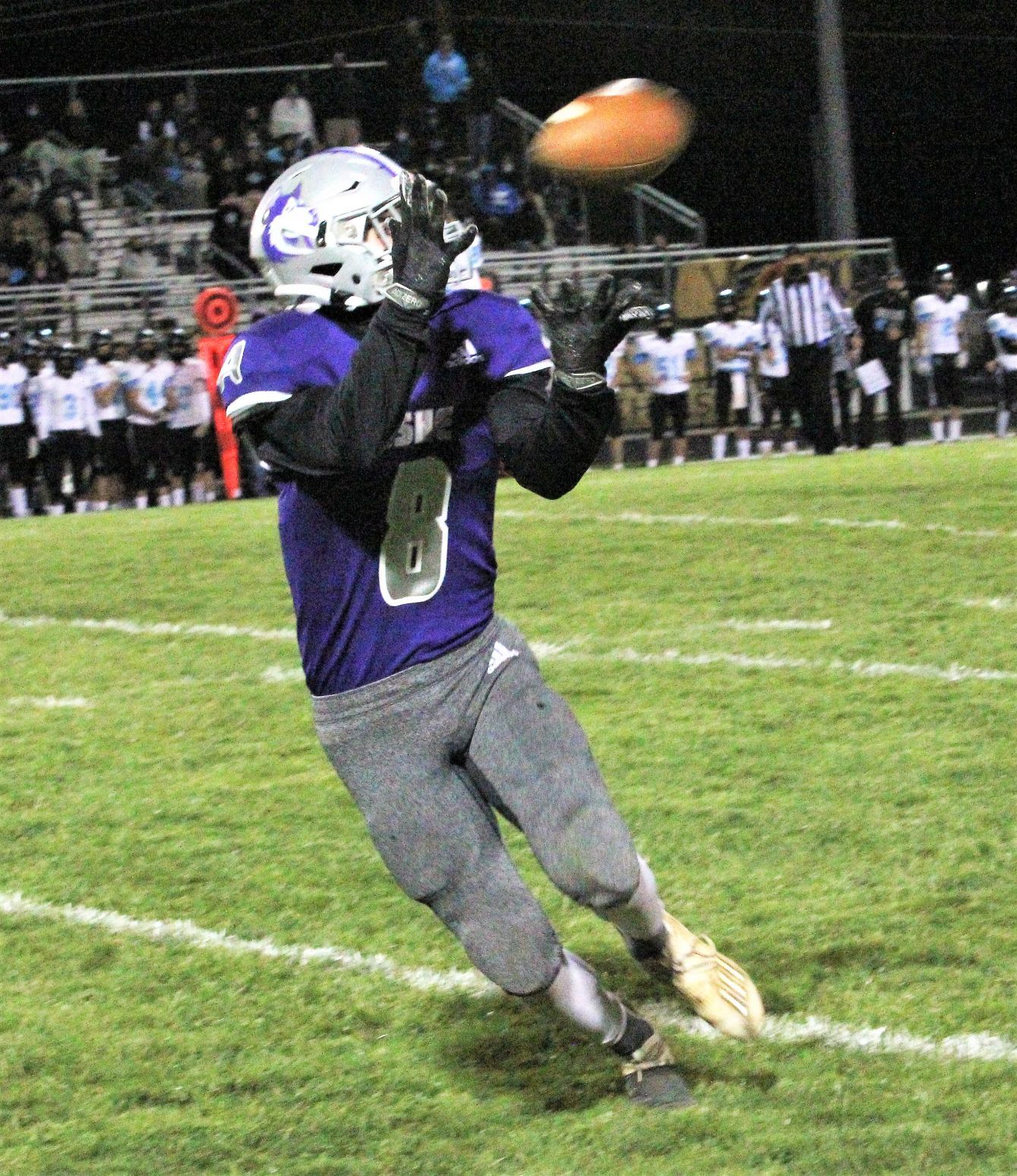 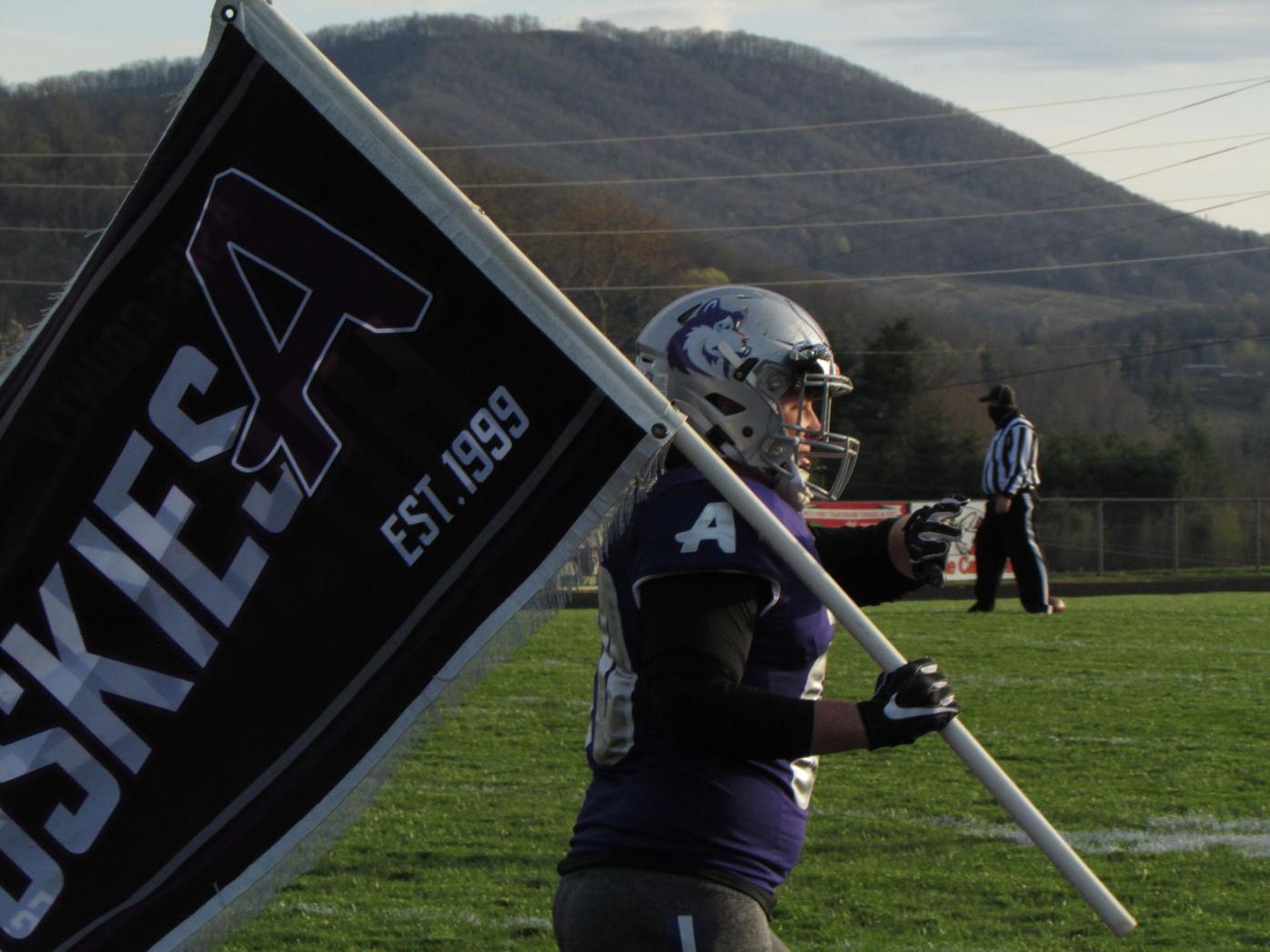 Jaron Greer leads the Husky pack for the last time. 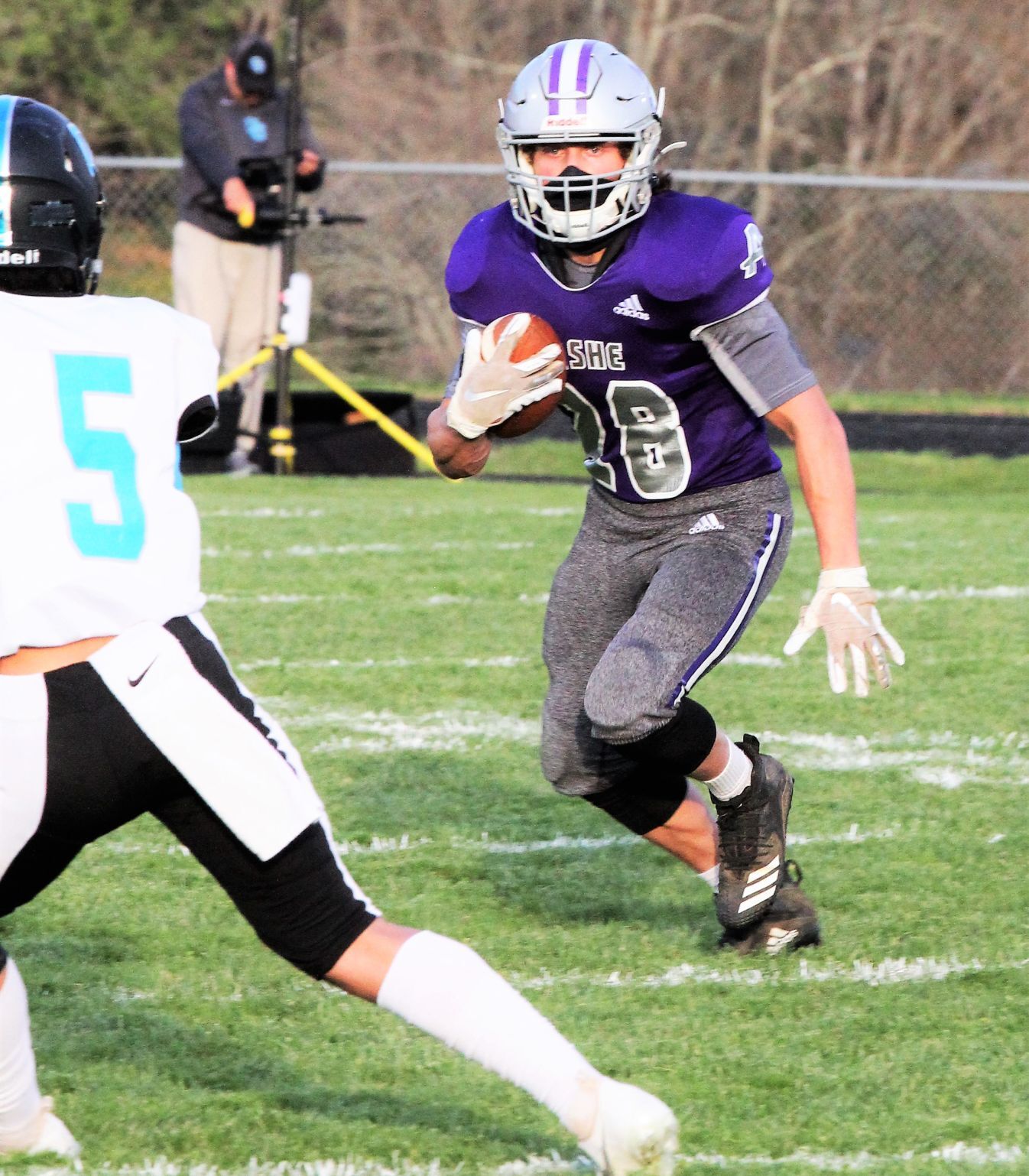 Matthew Peterson runs on the edge of the field as his defenders seek the ball.

Keenan Witherspoon lunges for a pass from Dawson Cox, just out of reach.

Jaron Greer leads the Husky pack for the last time.

Matthew Peterson runs on the edge of the field as his defenders seek the ball.

WEST JEFFERSON — On April 16, the Ashe County High School Husky pack took to the football field for the first round of the 2AA conference playoffs against the Oak Grove Grizzlies(6-2). Following four heart wrenching quarters of play, the Huskies had to hang up their helmets after a 17-12 loss.

As the Huskies prepared to kick-off against the Grizzlies, tensions mounted as they took to the field without star playmaker Austin Poe due to a hand injury. With Ashe receiving the ball first, Oak Grove wasted no time in setting up their defensive tactics, often giving hard hits and prompting incomplete passes.

After being forced to a fourth-down punt, the Huskies brought their defensive line onto the field, Ryan Blevins showing outstanding eyes for the ball and gaining tackles nearly every play.

Games of back-and-forth ensued on the Husky field and neither team could make it past the goal line.

With only three minutes and ten seconds left in the first, senior Jacob Miller intercepted a pass from the Grizzlies, setting up for a clean start.

JJ Mannan held the first touchdown of the night, leading the Huskies 6-0.

The Grizzlies made a strong comeback, running through the end zone two minutes into the second quarter.

The quick play startled the Huskies and their offensive line became loose, Quarterback Dawson Cox doing his best to make way on the wall the Grizzlies had built.

With a long throw to Thomas Ballard, hopes were brought back up for Ashe. However, after the incredible play, a holding call was placed on the Huskies, moving them further back from the initial pass.

The clock struck down to five minutes and the Grizzlies took another victory lap into the end zone, leading 14-6 at the end of the first half.

The second half became a blur to the Huskies and the crowd as Oak Grove stepped back onto the field, a new momentum lining the stadium and a hunger to win was placed onto the tables.

After a field goal and strong defense, the Grizzlies lead 17-6 with eight minutes left.

Ballard came back with a touchdown around the five minute mark of the third quarter and spirits were lifted throughout the crowd and team.

The fourth quarter saw no gains for either team.

The Grizzlies were victorious and the Huskies (7-1) ended their playoffs with a five point loss.