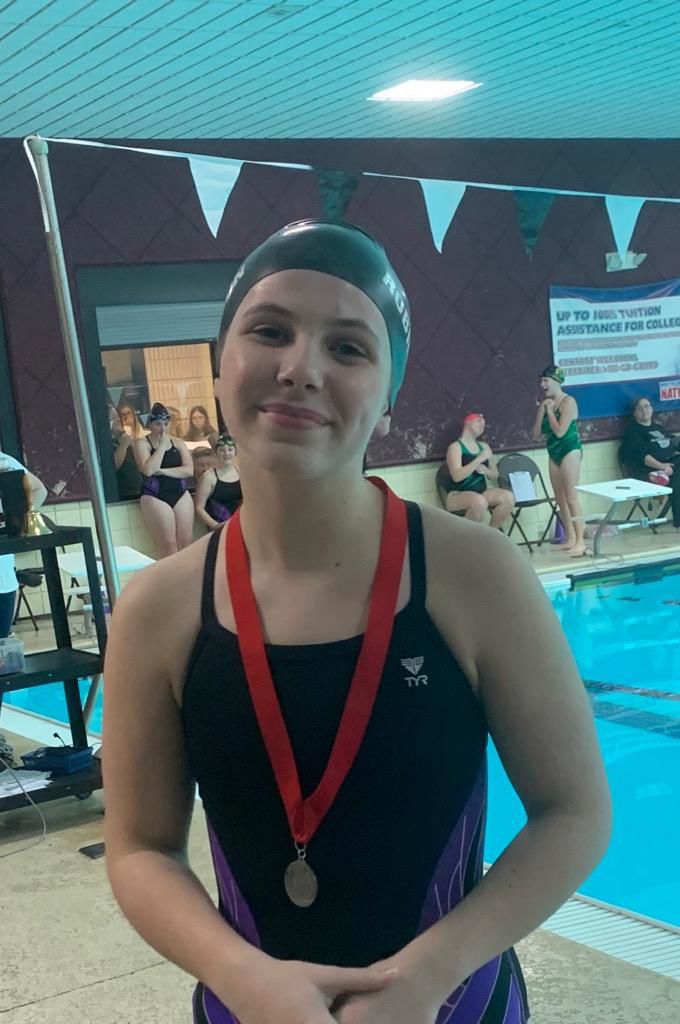 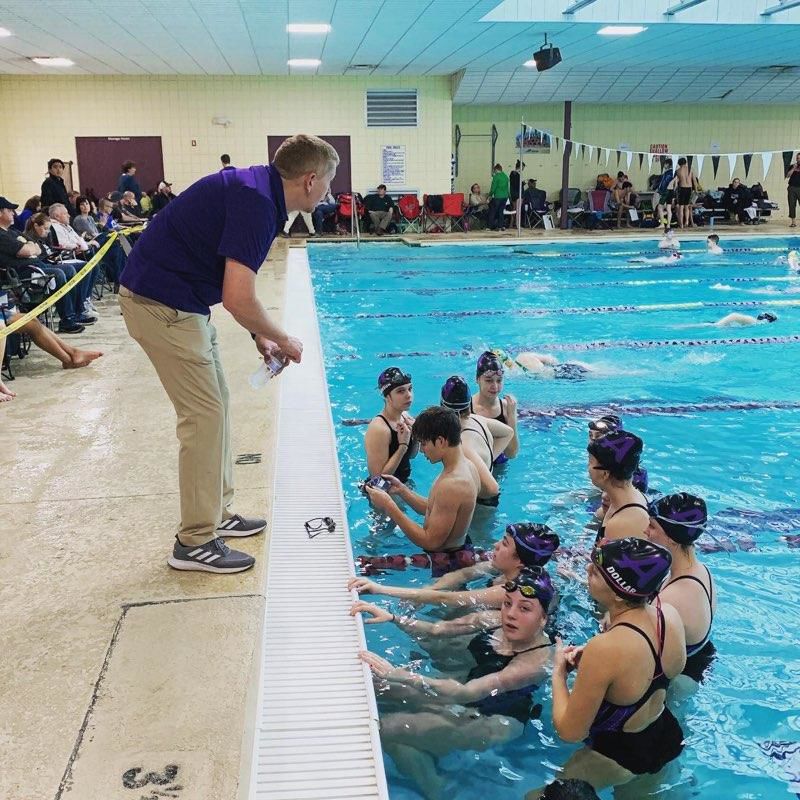 Coach of the Husky Swim Teams, David Koontz, takes a minute to speak with his swimmers during the conference championship in Pilot Mountain, N.C. 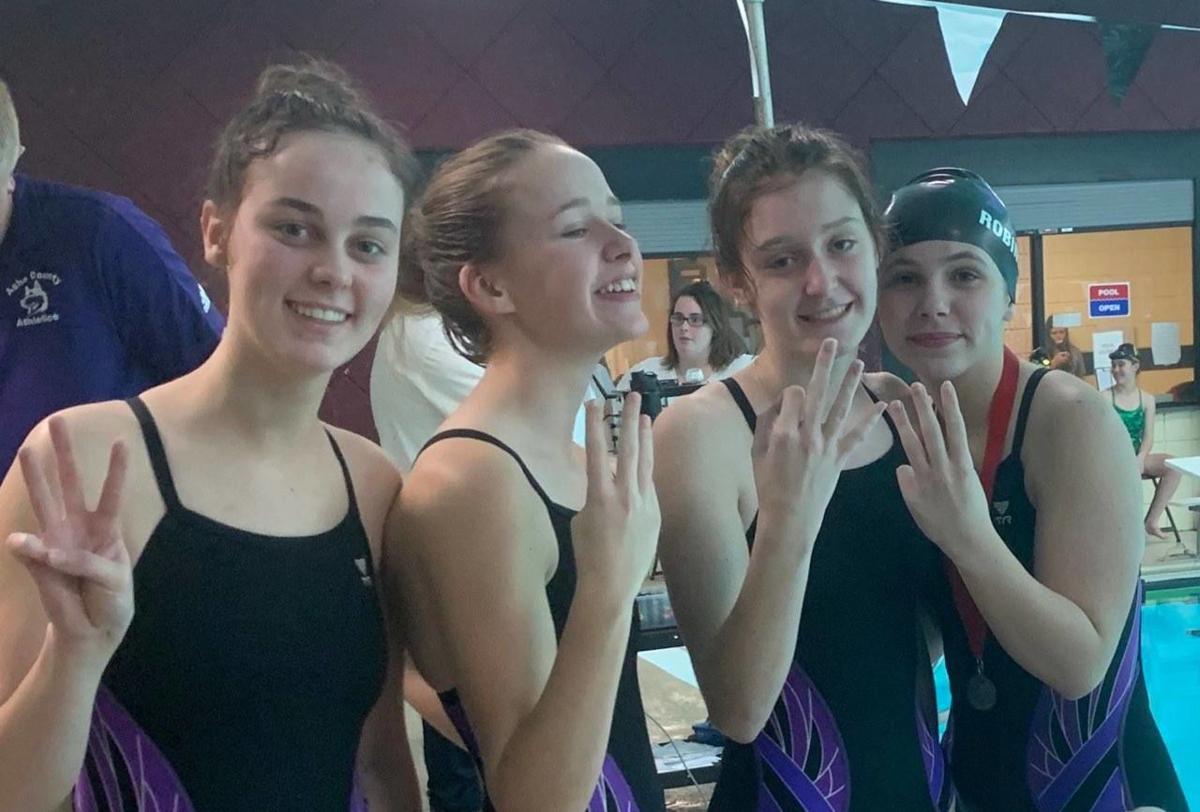 From Left: Lauren Edmondson, Leigh McKenzie, Josie Dancy and Lindsey Robinson pose for a picture together. The group of girls competed in the final event of the day, swam their best time of the year and finished fourth overall.

Coach of the Husky Swim Teams, David Koontz, takes a minute to speak with his swimmers during the conference championship in Pilot Mountain, N.C.

From Left: Lauren Edmondson, Leigh McKenzie, Josie Dancy and Lindsey Robinson pose for a picture together. The group of girls competed in the final event of the day, swam their best time of the year and finished fourth overall.

PILOT MOUTAIN — On Jan. 18, the Husky swim teams traveled to the Armfield Civic Center in Pilot Mountain to swim in the Conference Championship. The girls finished in third place overall while the men’s team finished sixth.

“Throughout the season we have really worked hard to get into swim shape, be able to swim multiple events, and be able to make our lineup more flexible. I thought coming into the Championship we were peaking at the right time,” coach David Koontz said.

“Earlier in the season we didn’t have a butterfly swimmer. Emma stepped up and worked on swimming that portion of the relay. It was a big boost for our team to be able to swim that relay,” Koontz said.

In the 200 free, Lindsey Robinson led the Huskies with a fifth-place finish and achieved her best time this season.

Maura Coldiron recorded her season best time in the event as well.

“I was really excited for him to finish with a season best time. He’s really worked hard learning this season,” Koontz said of Ramos’ performance.

In the 100 free, Leigh McKenzie led the Huskies with a 10th place finish and recorded her best time for the season.

Coldiron again recorded her season best time in this event.

For the men, Koontz finished 10th recording his best time this year.

In the 500 free, Lindsey Robinson made ACHS history by finishing second overall and cutting 22 seconds off her previous best.

“She is great at long distance swimming. She maintains a steady pace and is so consistent,” Koontz said of Robinson’s performance.

In the 200 Free Relay, which was one of the most exciting events of the day, the relay team composed of Edmondson, McKenzie, Dancy, and Robinson swam their best time of the year and finished third overall.

The team missed second place by less than a second, but I was so proud of them. Third place did earn them honorable mention.

“I really think they have a shot at qualifying for regionals with that time improvement,” Koontz said about the team’s performance.

In the 100 Back, the trio of Dancy, Lewis, and Vandergraff all scored for Ashe finishing fifth, sixth and 11th respectively. Dancy had an excellent swim as she cut off 6 seconds.

In the 100 Breast, the trio of McKenzie, Edmondson, and Blevins all scored for Ashe finishing 5th, 6th, and 10th overall.

McKenzie once again recorded a season best time and Blevins dropped 15 seconds, swimming the event for only the second time in her career.

In the final event of the day, the 400 free relay team of Edmondson, Leigh McKenzie, Dancy, and Robinson swam their best time of the year and finished fourth overall.

According to Koontz, their time in this final event made their resume stronger to get into regionals.

“Again I couldn’t be more proud of this team. For many of them, this is the first time they have ever competitively have swam. They made huge strides and are looking forward to next season as I am,” Koontz said.