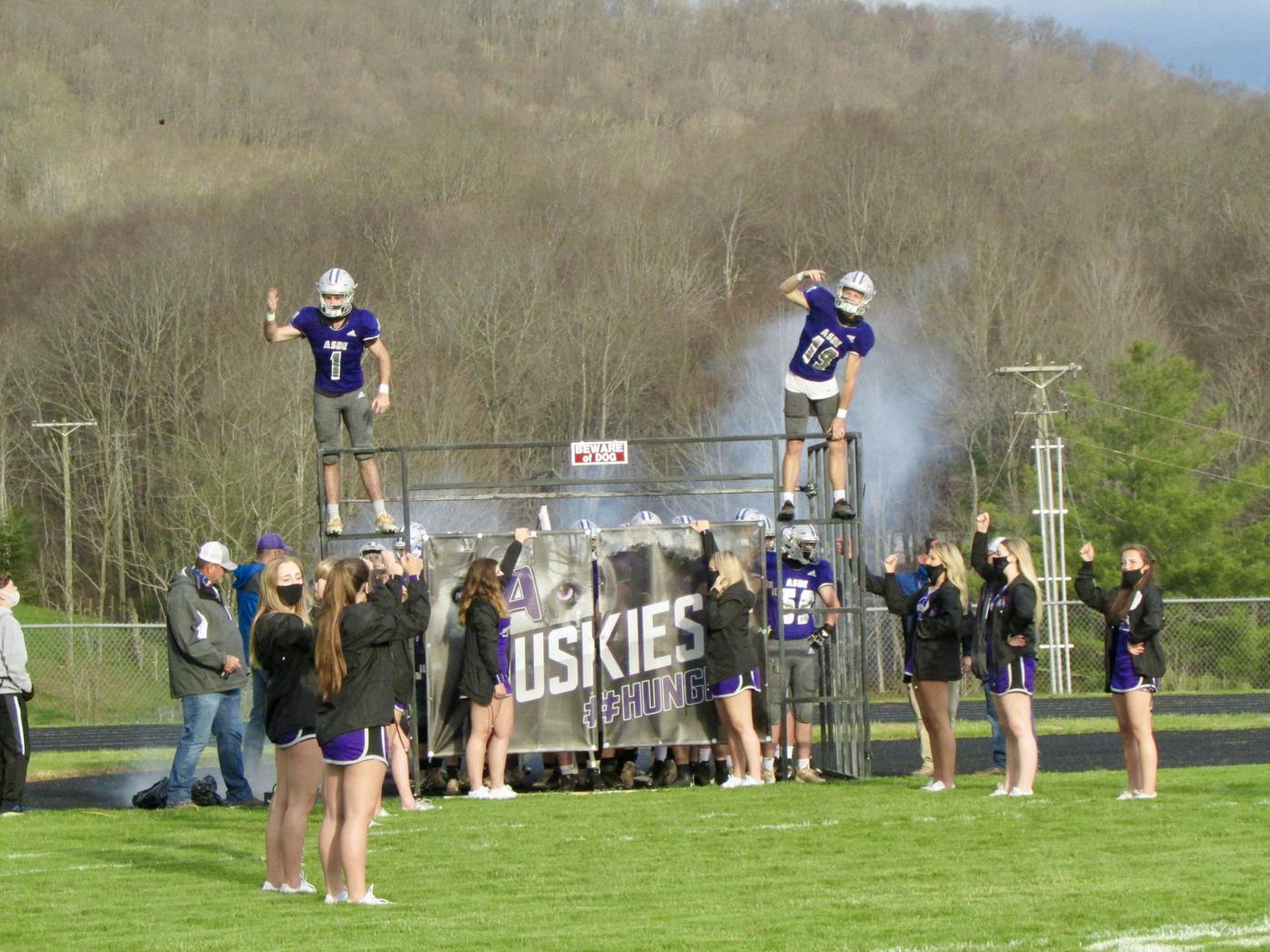 Austin Poe and Keenan Witherspoon hop on the Husky gate for the final hoorah of the conference season. 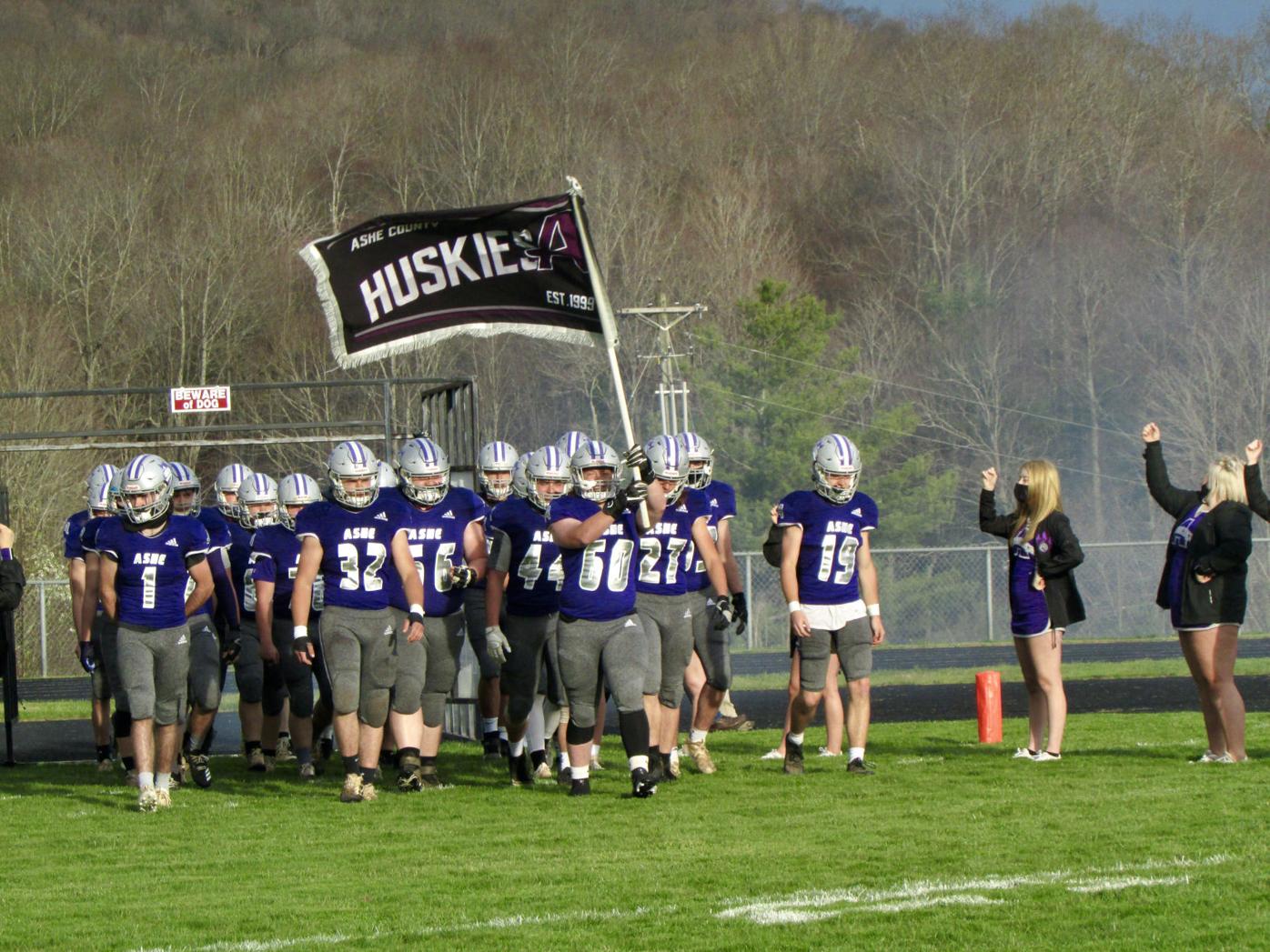 Jaron Greer leads the Husky Pack onto the ACHS field in the final conference game on April 9. 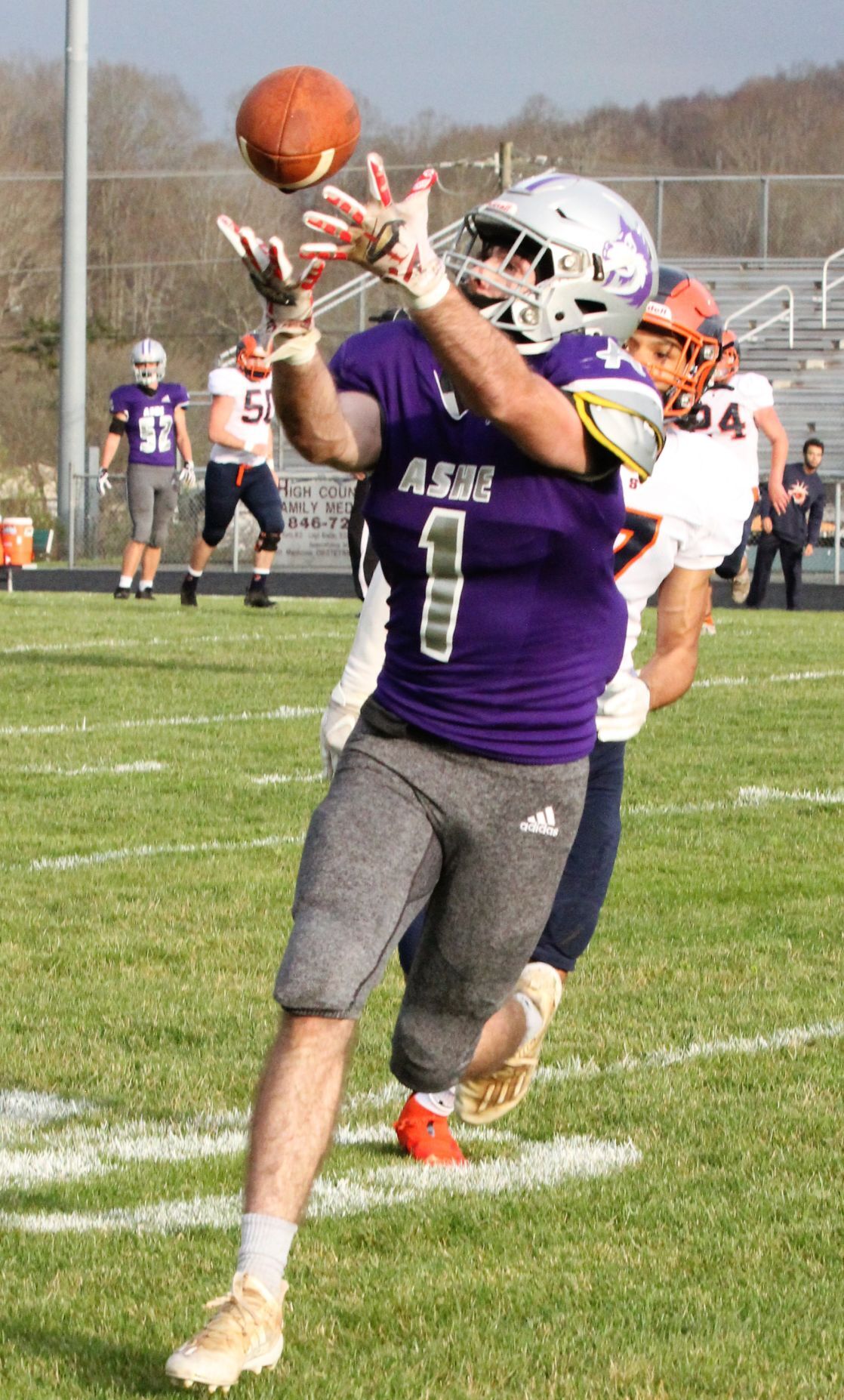 Austin Poe fingertips the ball, good for a Husky first down. 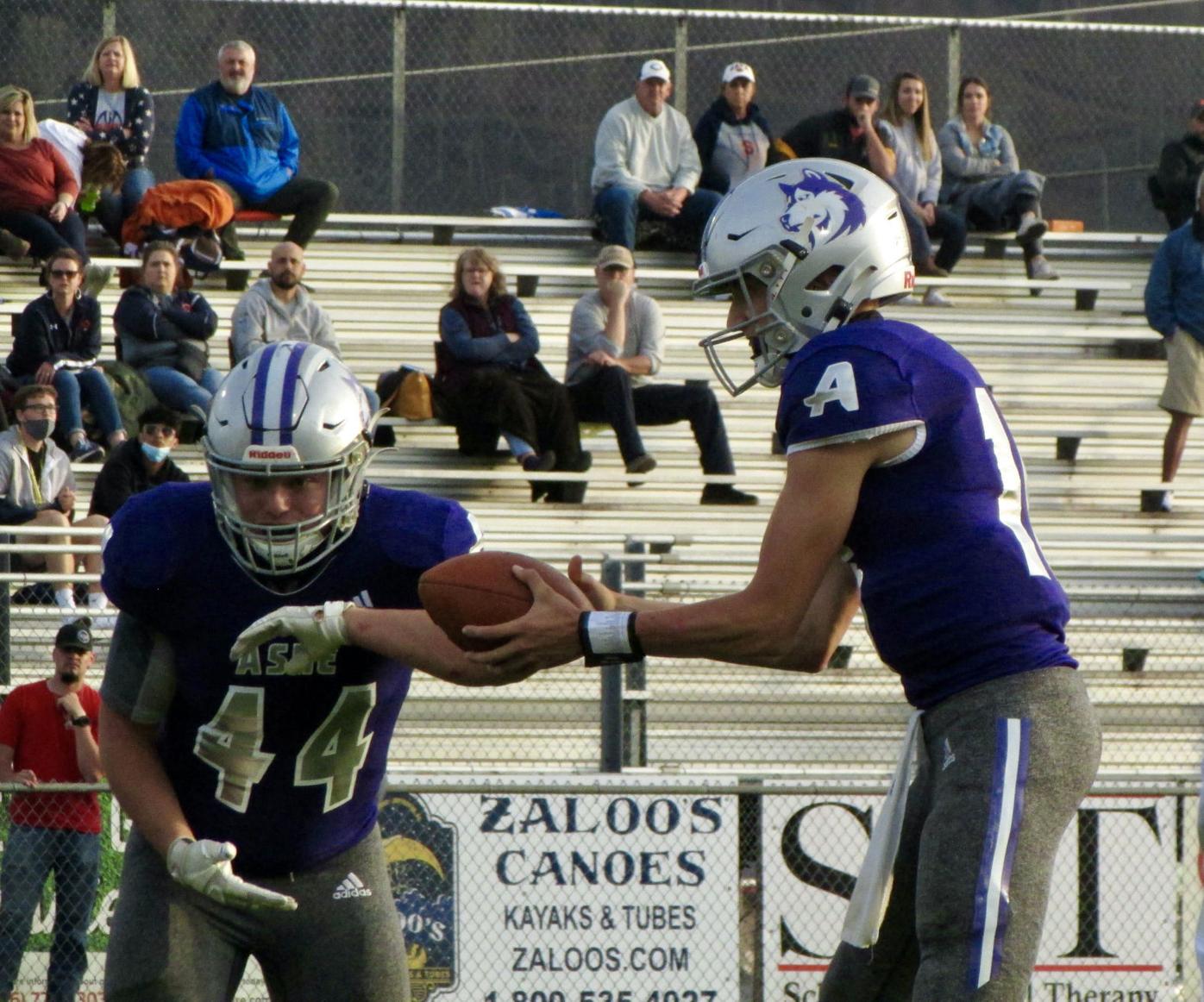 Quarterback Dawson Cox hands the ball off to Timothy Peterson in a driving play. 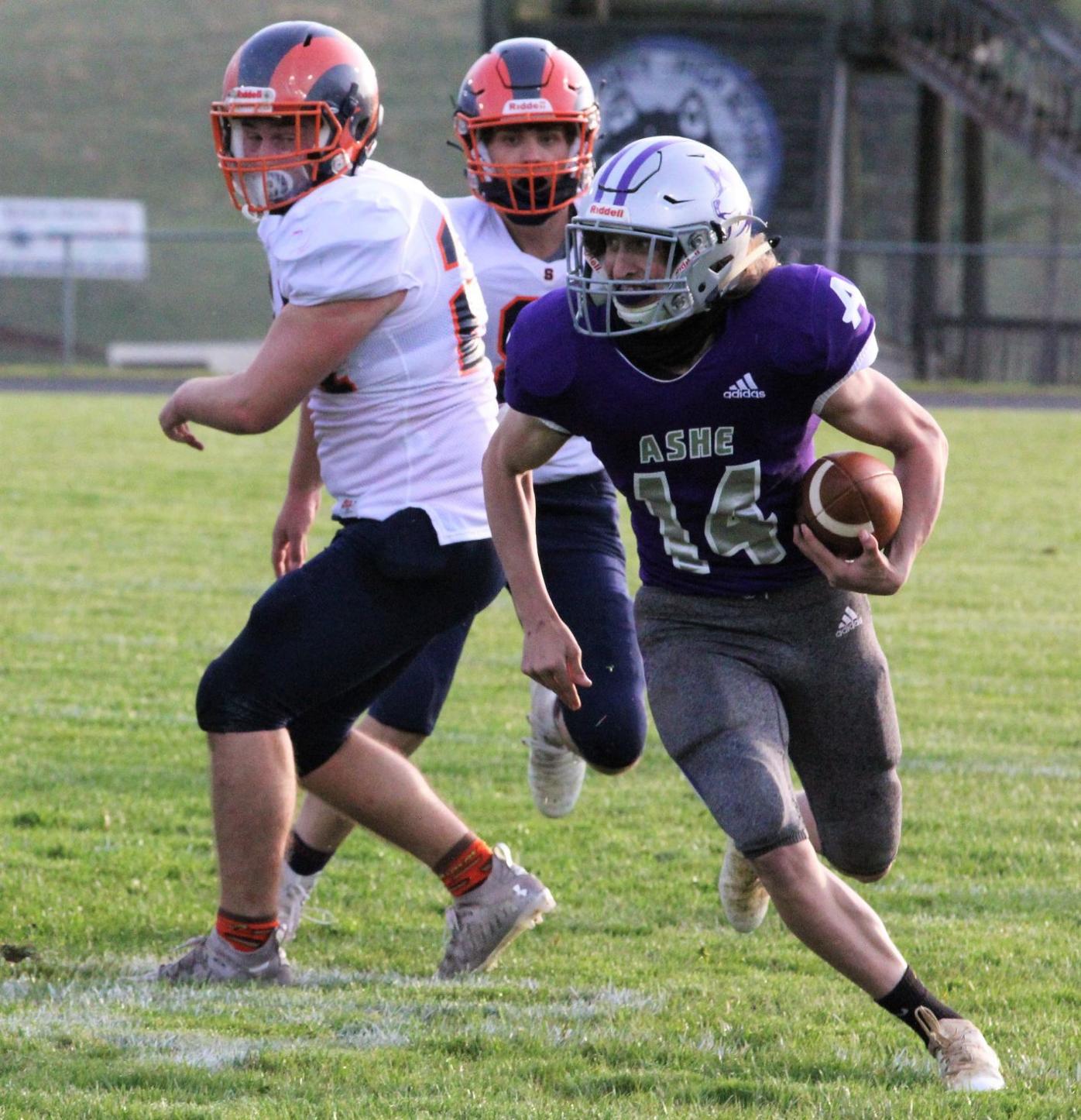 Andrew Peterson runs the ball downfield as his defenders chase the ball. 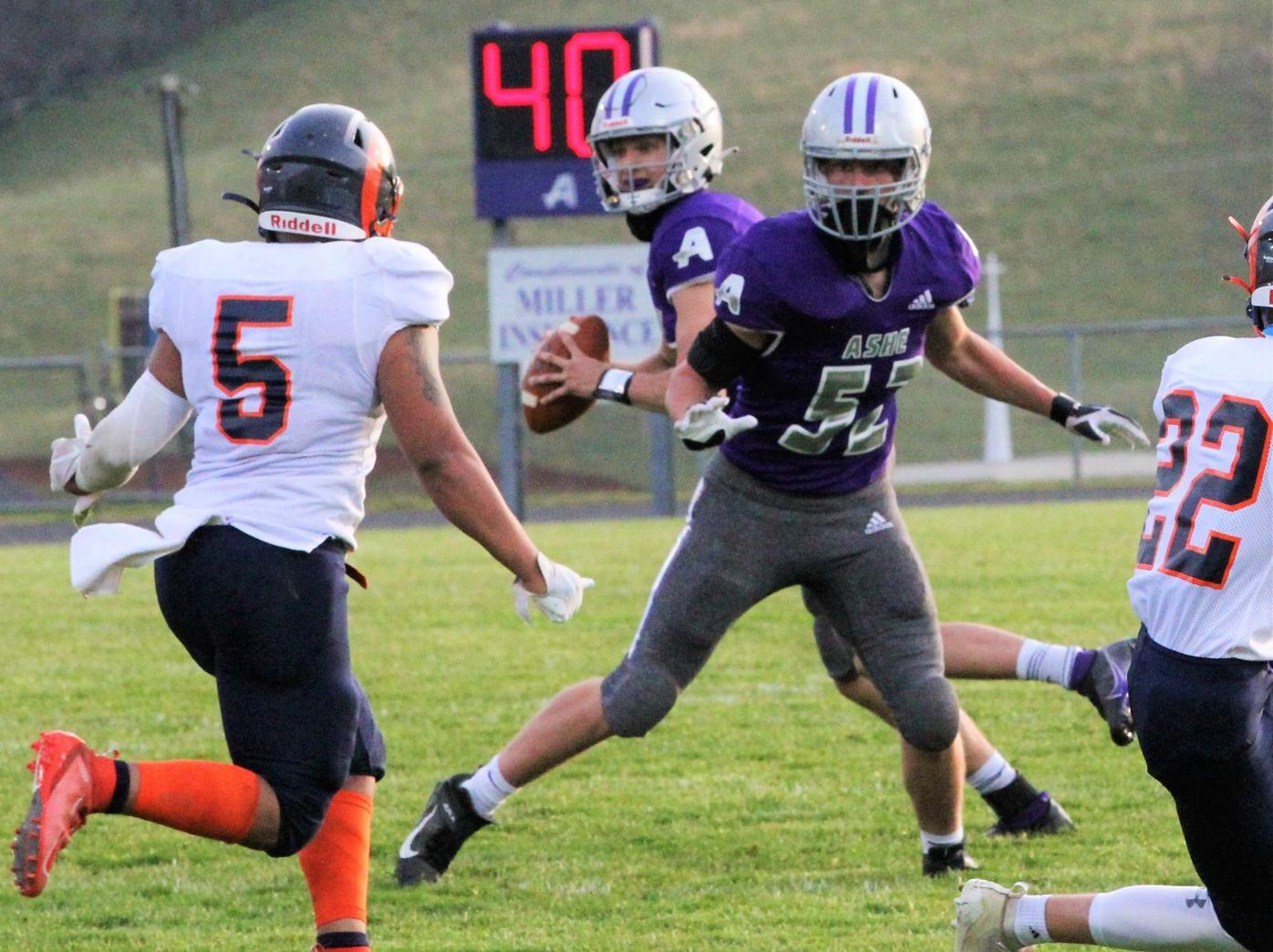 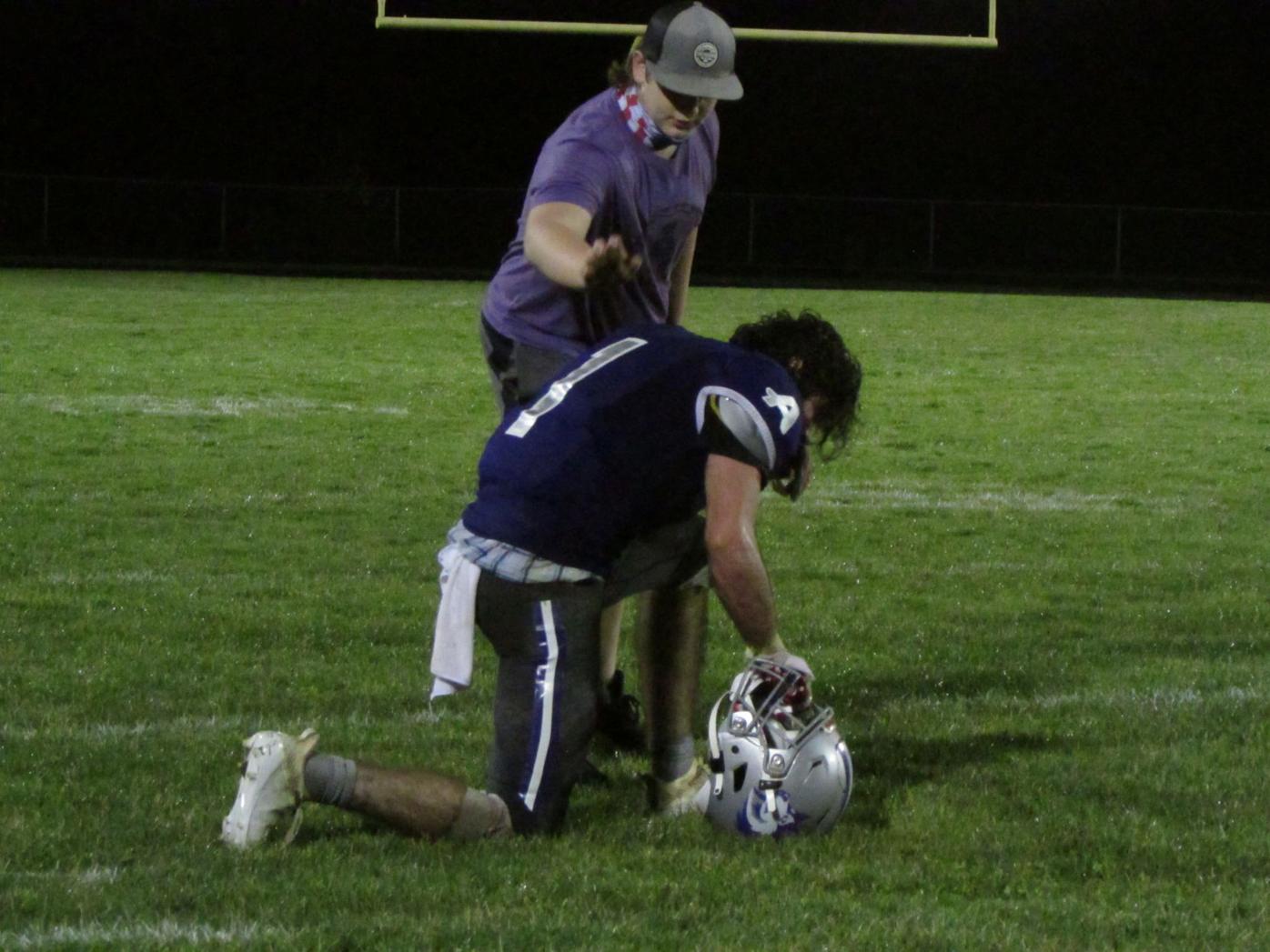 Austin Poe, overcome with emotion, kneels on the field after the victorious win against the Starmount Rams on April 9. 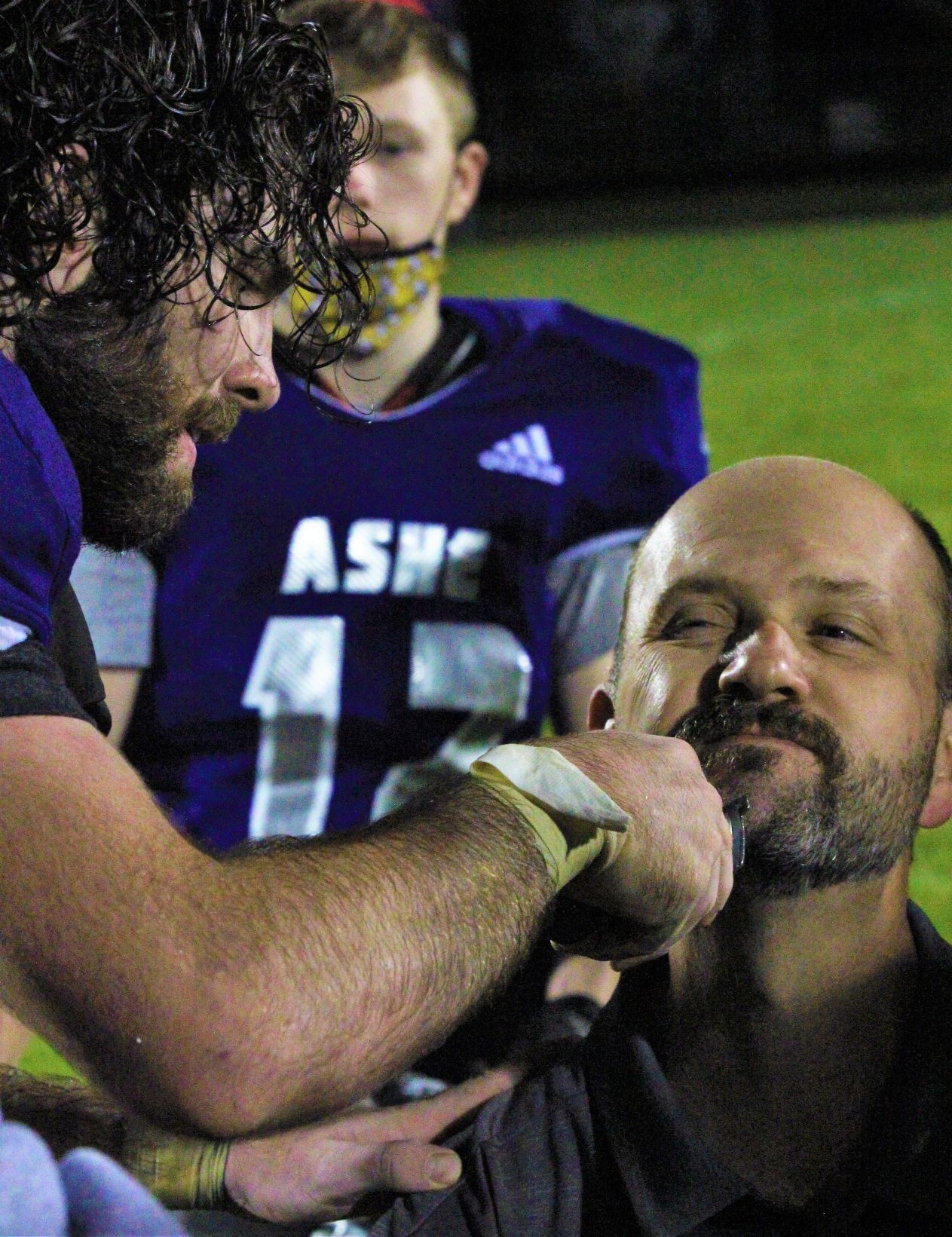 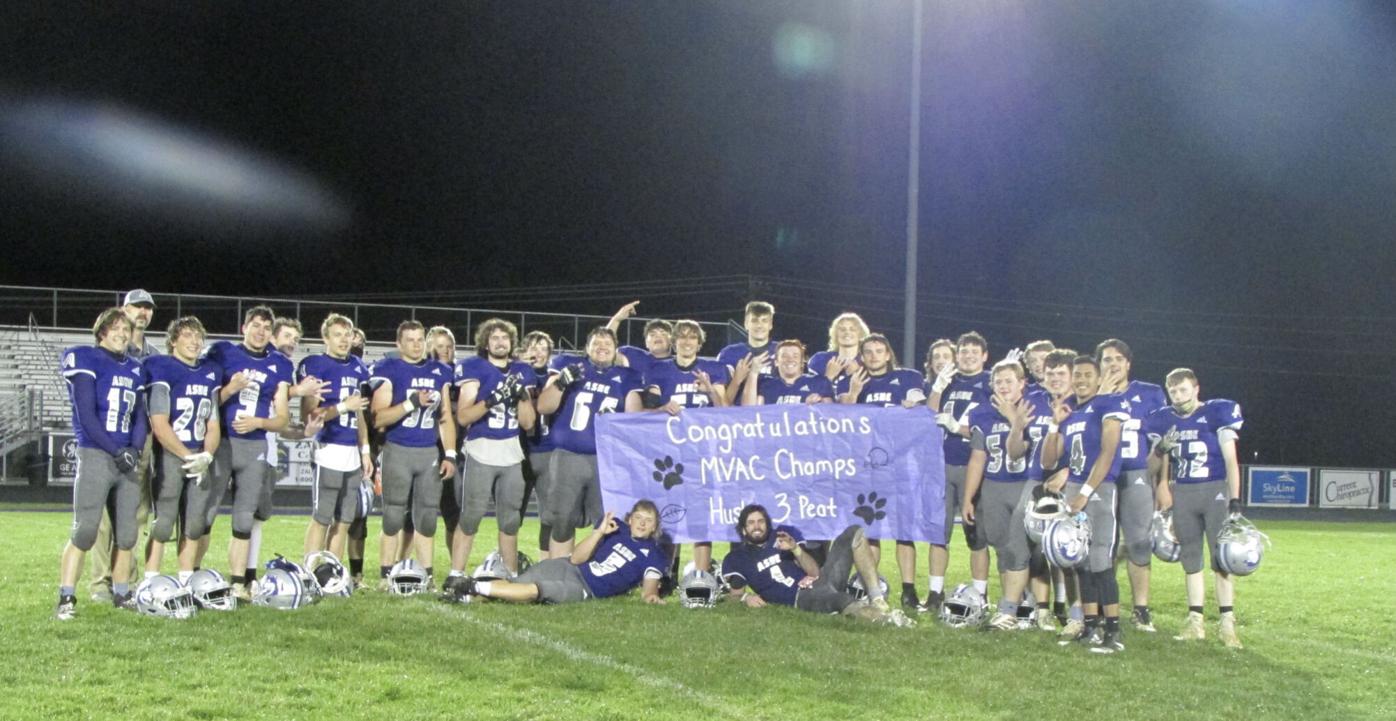 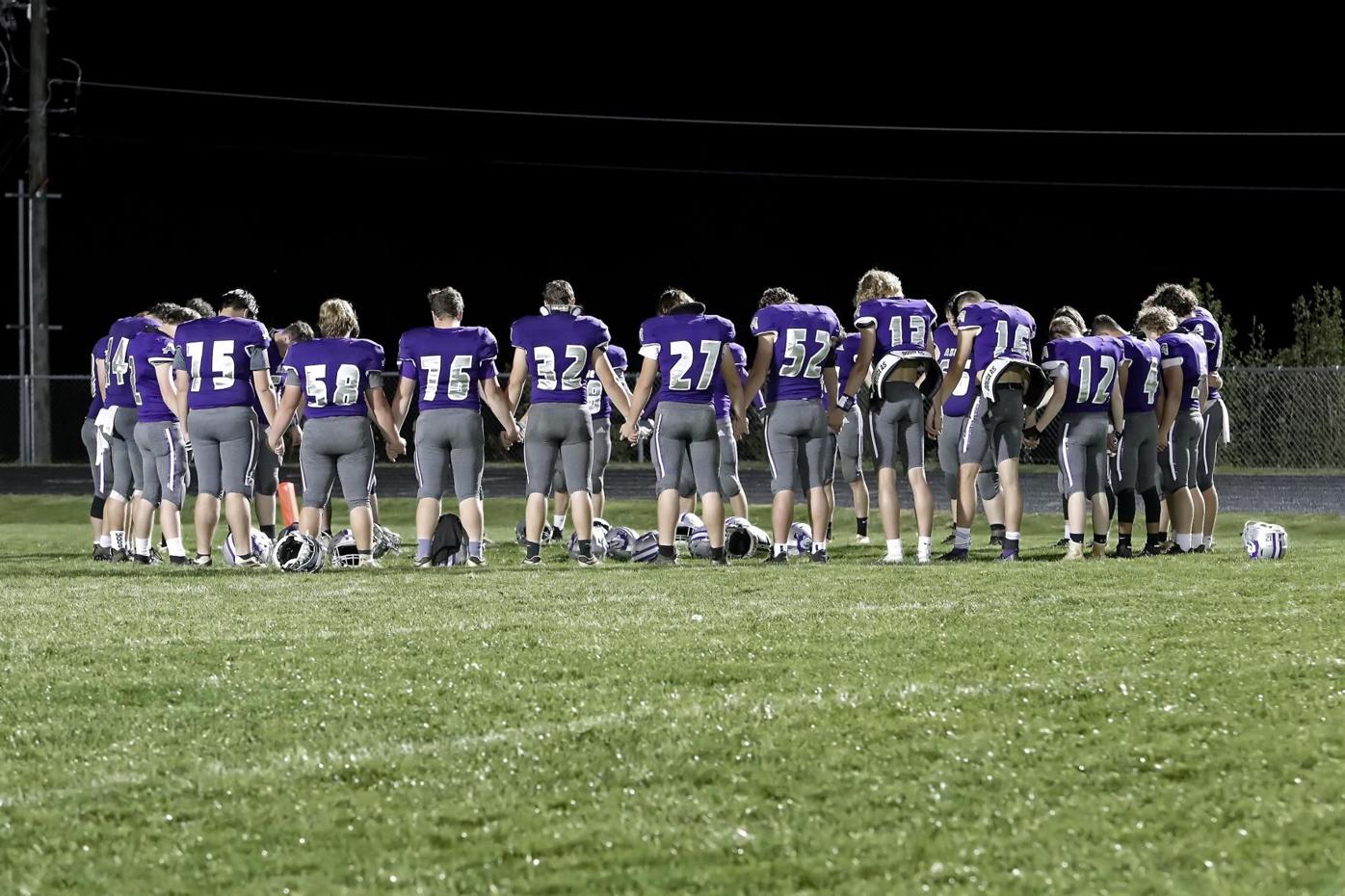 The Huskies gather in a prayer circle as they give thanks for their undefeated season.

Austin Poe and Keenan Witherspoon hop on the Husky gate for the final hoorah of the conference season.

Jaron Greer leads the Husky Pack onto the ACHS field in the final conference game on April 9.

Austin Poe fingertips the ball, good for a Husky first down.

Quarterback Dawson Cox hands the ball off to Timothy Peterson in a driving play.

Andrew Peterson runs the ball downfield as his defenders chase the ball.

Austin Poe, overcome with emotion, kneels on the field after the victorious win against the Starmount Rams on April 9.

The Huskies gather in a prayer circle as they give thanks for their undefeated season.

WEST JEFFERSON — Following six triumphant games, the Huskies rounded out their final nail-biting conference game 27-20 against the Starmount Rams (3-4) on April 9, taking an undefeated title and presenting themselves as MVAC 2A conference champions.

As the contest ensued on the Ashe County High School football field, the championship title was up for grabs as the Huskies, now 7-0, held a tight race with Elkin (5-1) who was also up for the title, just inching up toward No. 1. A possible tie would have been the outcome if the Huskies were to take defeat against the Rams.

Beginning the game, neither the Huskies or Rams could make it through the goal line in the first 12 minutes: both had a hard time handling the ball and risky plays were taken, ending in returning punts for each.

The offensive line took advantage quickly as the crowd of parents, fans and supporters cheered for the blow-out team. As their defenders rushed at the ball, the pack could not be taken down, even with four men against one. Ashe came close to the goal line a number of times, but could not break through the wall as Starmount began to gain strength and incomplete passes were thrown.

Heading into the second quarter, the Rams took hold of a turnover within the first 20 seconds, prompting the Huskies to tighten their defensive line.

Middle linebacker Ryan Blevins had an eye for the ball as he made his way through the players, chasing it for tackles. During the course of the game, Blevins totaled eight solo tackles, eight assisted tackles and one sack.

As the clock ticked down with 10 minutes left in the half, Andrew Peterson intercepted a pass on the Huskies’ 20-yard line.

JJ Mannan received a 44-yard pass from Quarterback Dawson Cox, good for the first Husky touchdown with seven and a half minutes left.

The Rams attempted a comeback for the first half, but Ashe’s defensive line was too secure, forcing the visiting team to a returning punt.

Keenan Witherspoon held the second touchdown of the night with only a minute left in the second quarter, ending it with 14-0.

The momentum had shifted as both teams made their way back onto the field following halftime and everyone in attendance had felt it.

The Rams regained possession and ran for a touchdown with a flag on the play, calling back the touchdown as Starmount had initiated two forward passes.

Following the call, the Rams came back once again with a six point touchdown.

Ashe’s offense had become loose and Starmount intercepted with six minutes left in the third quarter, running for their second touchdown of the night and gaining two extra points through the conversion.

Attempting to regain ground on their home field, Cox threw a long pass to Matthew Peterson, only good for a few seconds as Peterson fumbled and the Rams recovered near their own 45-yard line.

The Huskies had yet to see an overtake this season, but as the fourth quarter began, the Rams managed to take advantage, leading 20-14. On the extra point attempt, Austin Poe blocked the kick, leaving the Rams to a six-point lead.

Poe held confidence with the ball after his team regained possession and took a long run for a touchdown with around eight minutes left, tying the score 20-20.

The energy throughout the stadium left fans on the edge of their seats as the clock wound down, many hoping for overtime.

The clock hit 41.9 seconds and the ball was in possession of the Rams. Hope had been dwindled throughout the team until Starmount fumbled. Poe recovered the ball and ran for the final Husky touchdown.

Following the game, the Husky pack won a bet with head coach Brian Hampton — and gave his beard a trim.

“This team is very special,” said Hampton. “They just make things happen. This group loves each other and plays for each other like no other bunch I have had. I have enjoyed the free ride and hope the ride will last a few more weeks.”

In the first round of the NCHSAA 2A playoffs, the Huskies will go up against the Oak Grove Grizzlies (5-2) who are second in their conference. Kick-off is set for 7 p.m. on April 16.